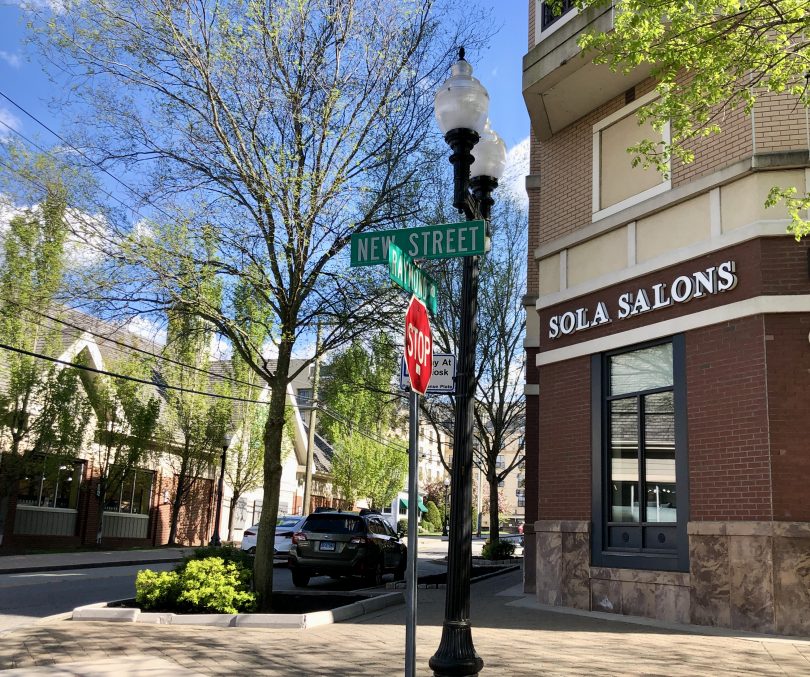 The name of New Street in West Hartford's Blue Back Square will be changed to Dinah Road. Photo credit: Ronni Newton

The West Hartford Town Council voted unanimously May 10 to move forward with a plan to change the name of New Street to Dinah Road to honor a formerly enslaved woman and her daughter. 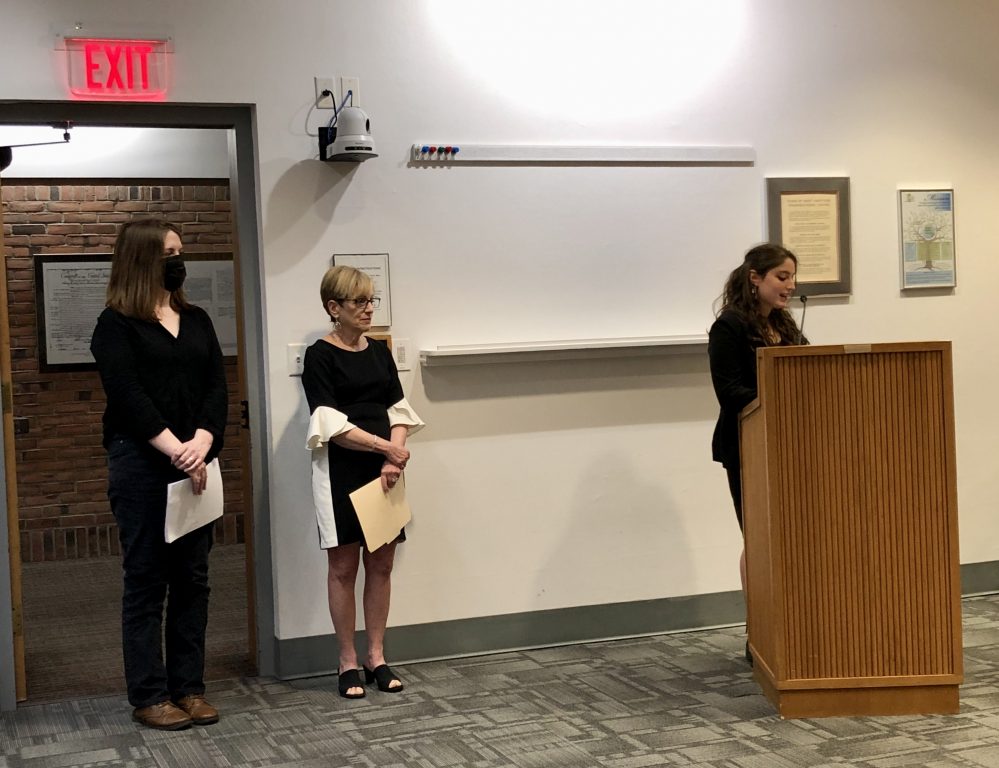 Tziyona Goldfischer a junior at New England Jewish Academy and a member of the Mayor’s Youth Council, testifies at the Town Council meeting on May 10, 2022, in favor of changing the name of New Street to Dinah Road. At left are Kari Karp and Carol Waxman from the West Hartford Public Library. Photo credit: Ronni Newton

A campaign by the Mayor’s Youth Council to rename a West Hartford roadway in honor of two women who were once enslaved in town was approved unanimously by the Town Council on May 10.

Mayor’s Youth Council members Tzionya Goldfischer, a student at the New England Jewish Academy, and Sarah Granquist and Priya Sinha, both students at Hall High School, have been working closely with Town Historian Tracey Wilson to gain approval to change the name of New Street, a roadway in Blue Back Square that runs between Raymond and Isham roads, to Dinah Road. Dinah, and her daughter, who was also named Dinah, were once enslaved in the West Division of Hartford, now known as West Hartford.

“Street names are powerful and they should have meaning, and this one has very real meaning,” Mayor Shari Cantor said before the vote.

The name change will be official as of Aug. 10, 2022. The proposal was to have the renaming take effect sooner, but representatives of Blue Back Square owner Charter Realty, who initially opposed changing the name because of the impact on residents of the LOFTS apartments, requested additional time before it becomes official. Those who live in the 48 apartments at 15 New Street will have to change their addresses on official documents including drivers’ licenses and voter registration. Roughly 100 people currently live in the building. 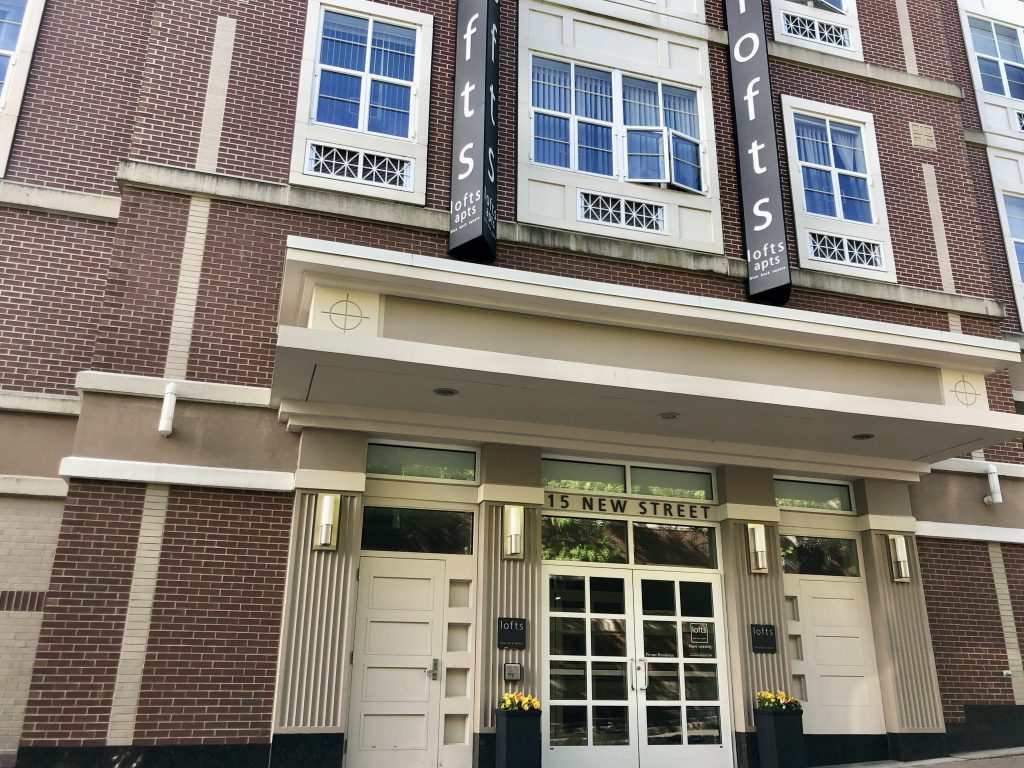 The Lofts apartments are currently located at 15 New Street, but the address will be changing as the roadway is renamed Dinah Road. Photo credit: Ronni Newton

Before being elected to the Town Council, Leon Davidoff was a member of the Town Plan and Zoning Commission 15 years ago when the development of Blue Back Square was under consideration, and said more than 50 hours of meetings took place – including discussions about the name “New Street.” He said the vote Tuesday is another example of the transformative change the mixed use development has been able to bring about.

“It’s really rare that one gets to vote twice on a name for a street,” Davidoff said. The developer ultimately used “New Street” as a placeholder, but no one anticipated the complexity of changing the name – including the Town Council needing to first adopt a plan for the honorary and historic renaming of streets.

“This honors our history,” Davidoff said, which is important even if that history is bleaker and darker than what many may realize. He also suggested placing a historical marker on Dinah Road as a tangible sign of tribute to Dinah the mother and Dinah the daughter, so people can know who they were, and to also honor the work of the Mayor’s Youth Council and the Witness Stones Project.

Wilson is one of three coordinators of the Witness Stones project in West Hartford, and said stones were placed in Old Center Cemetery in 2021 honoring both Dinah the mother and Dinah the daughter.

Research conducted as part of the Witness Stones project revealed that Dinah (1711-1761) and her daughter Dinah (1750-c.1800) were both baptized and became church members. Wilson said it’s likely that their household duties included keeping house, sewing and washing clothing, caring for children, milking cows, and tending to a vegetable garden. According to Wilson, Dinah the daughter was freed in 1791 and lived out part of her life as a free woman.

Students at King Philip Middle School studied Dinah during the 2020-2021 academic year, which led to the placement of their Witness Stones in Old Center Cemetery. Those students were also involved in a successful effort to get the Town Council to approve the plan for the honorary and historic renaming of streets, but by the time the ordinance was passed, in June 2021, the school year was ending.

The Mayor’s Youth Council took over the effort, and earlier this spring they gathered close to 150 signatures on a petition – more than the 100 signatures of electors required under the ordinance – and last week presented their request to the Town Plan and Zoning Committee in advance of the Town Council meeting. TPZ gave it unanimous approval. 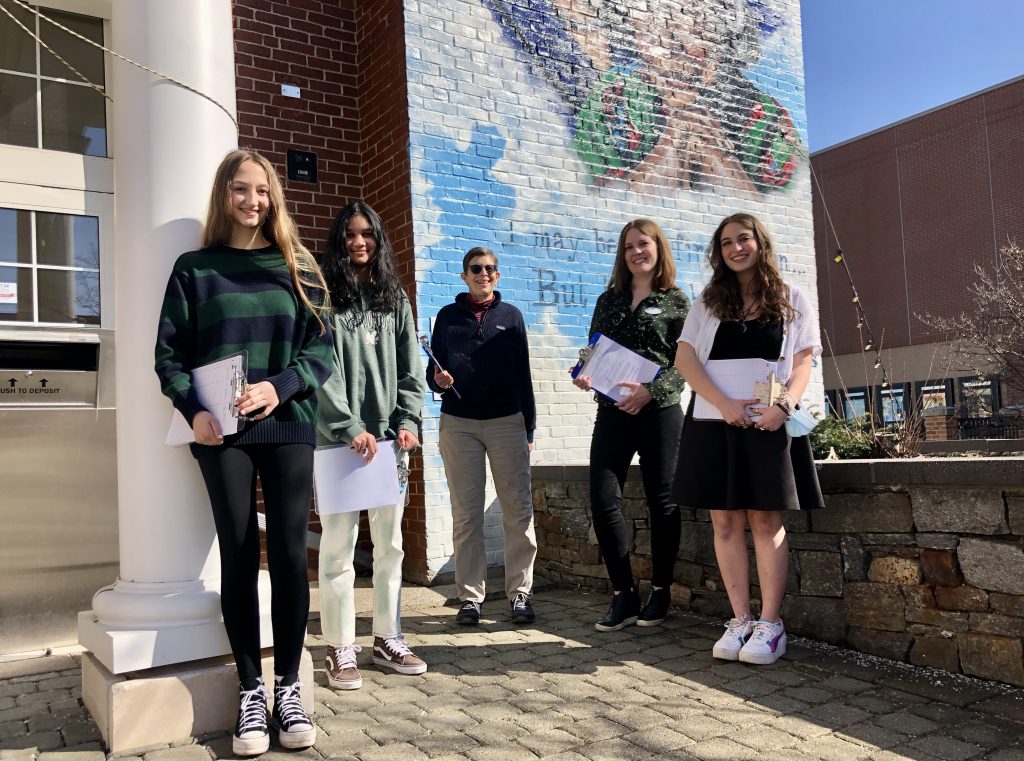 “This Council has given these students the chance to ‘put in place solutions through active civic engagement.’ Their engagement in this project, facilitated by Teen Librarian Kari Karp [liaison to the Youth Council], I think, is not just a student exercise – it models the power of residents to build community and make positive social and cultural change in the town,” Wilson told the Town Council during the public comment session of Tuesday’s meeting.

Wilson noted that “Library Lane” was rejected as a possible name 15 years ago when “New Street” was ultimately chosen. It was a compromise until a more meaningful name could be chosen, Wilson said. As far as she knows, there are no other streets in West Hartford consciously named after a woman of color.

“Changing the name of a street in West Hartford is not a new thing. New Britain Avenue, Albany Avenue, and Sedgwick Road are not original names. Between 1890 and 1930 there were more than 25 street name changes,” Wilson said.

“Changing the name of New Street is part of a bigger story of defining the cultural landscape – which has been supported by the Town Council, civic organizations, houses of worship, schools, the Noah Webster House and West Hartford Historical Society, adults and students alike,” Wilson said. 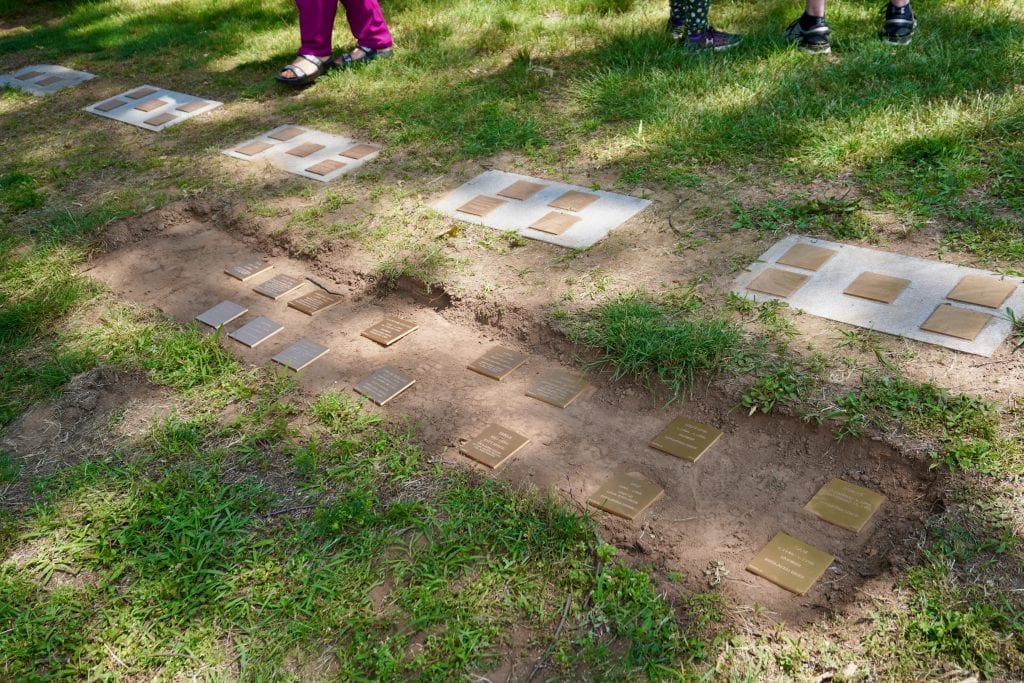 Those efforts to accurately recount the town’s past have already been manifested in multiple ways, Wilson said, including the naming Bristow middle school, renaming of Goodman Green as Unity Green, etching the name of Prut, a former enslaved man, name into the  War memorial, painting the names of 12 enslaved people into the Martin Luther King mural, re-vamping of the colonial life Noah Webster House field trip to integrate the story of slavery into the student experience, placing a memorial to minister Lemuel Haynes at the First Church, and installing 50 Witness Stones in the Old Center Cemetery to commemorate people enslaved in West Hartford .

Neither Sinha nor Granquist was able to attend the May 10 meeting, but others read testimony on their behalf.

“Changing New Street to Dinah Road wouldn’t just be simply changing a sign,” Carol Waxman said, as she read what Sinha had written. “It would be honoring those who were once enslaved in this town we now call home, and uncovering the history that was covered up. New Street was made with the idea that it would be temporary and changed in the near future. However, it’s been too long. Our history isn’t temporary and is not a substitution. It is permanent and will never go away whether we change this sign or not. So my question for everyone is, are we willing to honor the voice of an African American slave who never had one, or act as if the past never happened?”

Karp read the testimony that Granquist had prepared.

“This street name change would spark conversations and the telling of Dinah’s story, ensuring their history will not be forgotten,” she said, and would be a reminder that enslaved people helped build West Hartford.“We often say we are a diverse community but what do we have to show for it in our cultural landscape?”

Council member Mark Zydanowicz made the suggestion that if new roadways are created as development takes place in town, when there would not be a need for anyone to change their address, it would be good to consider meaningful names in honor of important figures in West Hartford history.

Councilor Carol Blanks said changing the name of New Street to Dinah Road is an important step, and she liked Davidoff’s idea about a historical marker. She expressed her thanks to the town’s youth and the library staff for pursuing this important project.

“I’m just really proud of this moment, proud of this Council to support this resolution,” Blanks said, noting that it is history in the making.