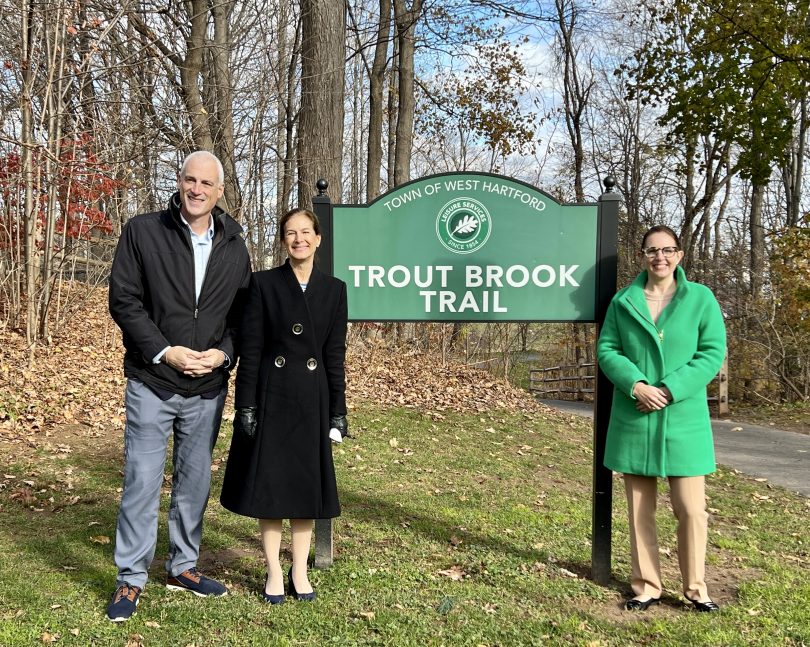 Construction on the next phase of West Hartford’s Trout Brook Trail is expected to begin in the spring of 2023. 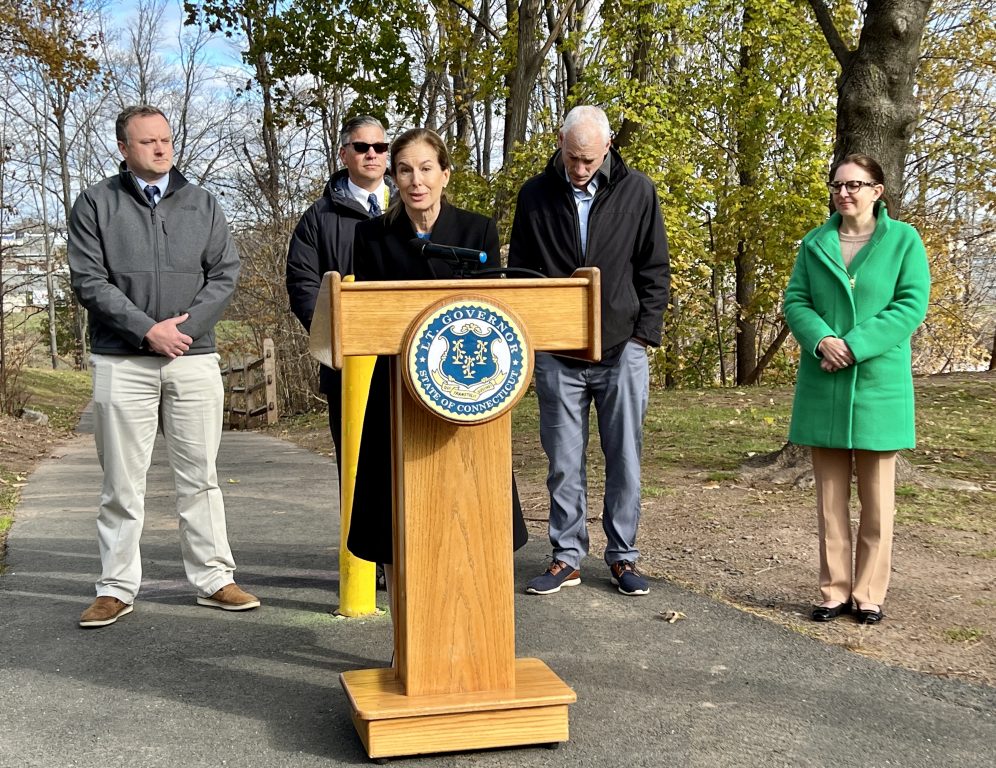 A north-south linear park traversing West Hartford is one step closer to completion thanks to a state grant-in-aid of $1,080,000 approved by the Bond Commission and celebrated at a press conference held by Lt. Gov. Susan Bysiewicz at one of the trailheads on Tuesday morning.

Once completed, Trout Brook Trail, a 10-foot-wide paved multi-use path – will extend 3.5 miles, from New Park Avenue to Asylum Avenue. The trail is intended to be used for recreational purposes, as well as for commuters, increasing accessibility to and opportunity for businesses in the New Park Avenue, Elmwood, Center/Blue Back Square, and Bishops Corner areas.

“This weather is actually perfect for going walking or running on the Trout Brook Trail,” Bysiewicz said on a sunny Tuesday morning, noting that West Hartford’s legislative delegation, several of whom were in attendance, strongly lobbied for the state funding to help complete the trail as a priority project.

The trail is important for residents, to enhance the town as a destination, and to increase economic activity, she said.

Currently about 2 of the 3.5 miles of Trout Brook Trail has been completed. 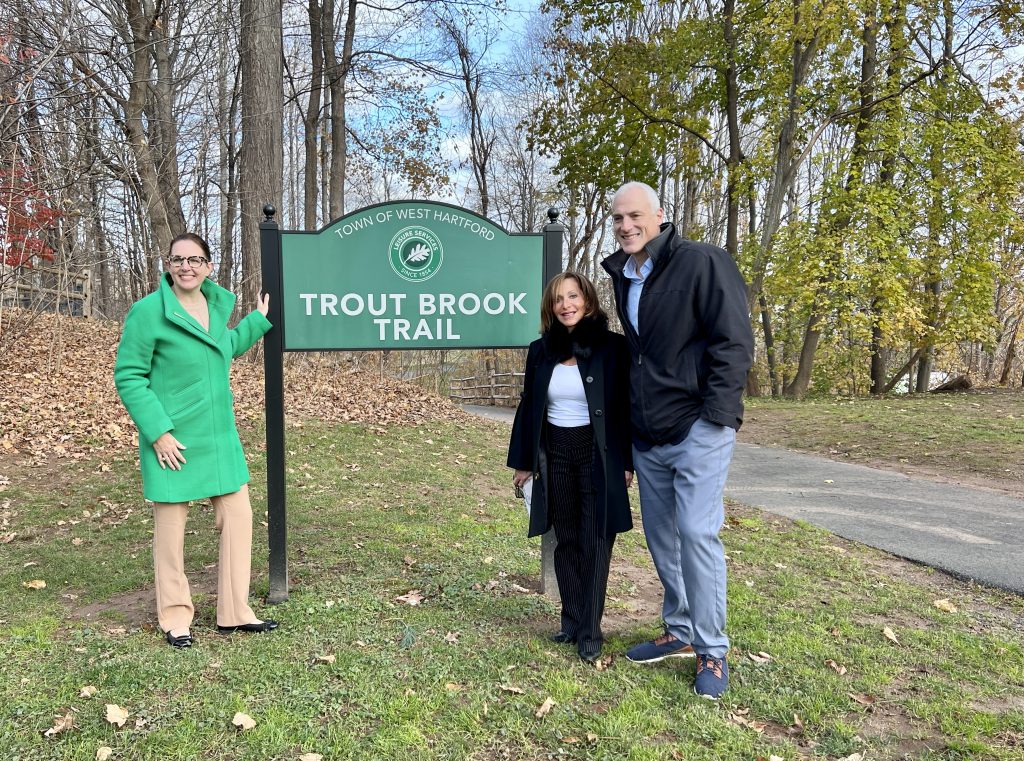 State Sen. Derek Slap said support from and partnership with the state for projects like the trail construction is critical, and ultimately takes pressure off local property taxes. “When it comes to really important critical investments that improve economic activity, that improve quality of life, they’re going to be partners with us … and that is critical for us to be able to make the investment in infrastructure that we need to.”

Slap said he was very glad this project was able to be included as a priority and receive state funding. There are similarities to this project and a beautiful trail in Burlington, he said, and it’s great to be able to have that type of connectivity of different parts of town. In particular the Trout Brook Trail will ultimately connect to the former UConn property, for which redevelopment plans are currently in the early planning stages.

“I am thrilled … that this investment will go to really expand what has been a real jewel in the 20th District for our community,” said state Rep. Kate Farrar, who was re-elected earlier this month to represent the 20th District, through which a large portion of the trail runs. “As someone who has walked my dog on this trail, and my husband who cycles on this trail … it’s not just an opportunity for recreation but it really is a way to ensure we have a greener future.”

This type of investment is possible because of the commitments the state has made to decrease its debt and improve its bond rating, Farrar said. “I’m thrilled to celebrate this day, to celebrate the construction that is to come for really linking so many of us in southern West Hartford to all parts of West Hartford – north and south.”

Duane Martin, the town’s director of Community Development, said he hopes the entire trail will be completed in two to three years. Three sections remain unfinished, and the $1.08 million can be applied to work being done on each of those. 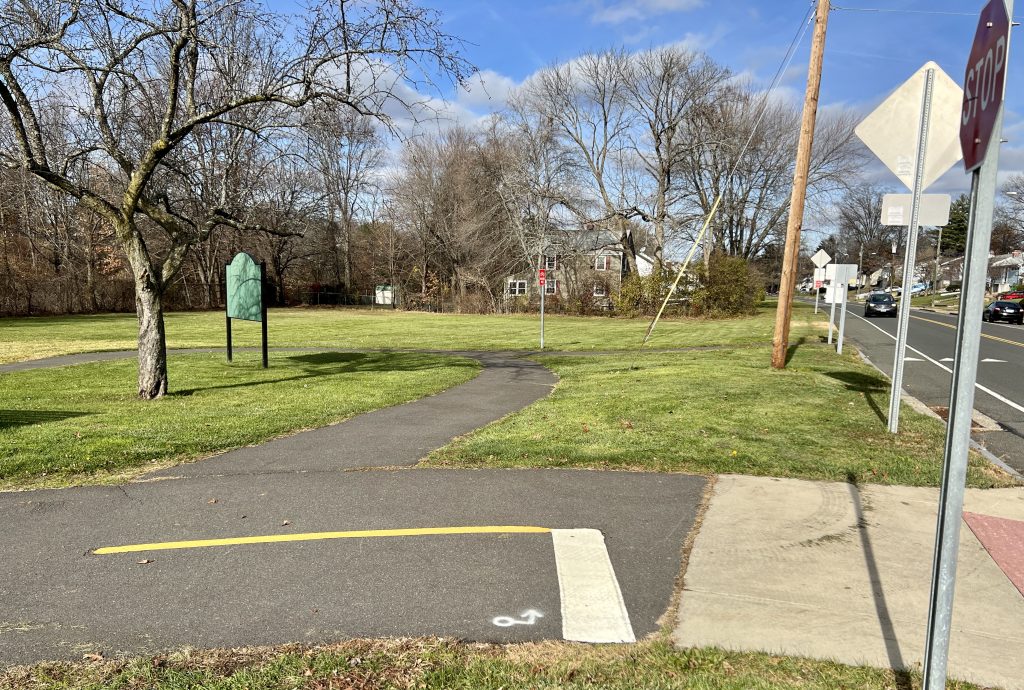 Jackson Avenue to Park Road is in design, Martin said. “We’re hoping to be in construction in the next year or so,” he said of that portion.

The 2,900-foot-long Fern Street to Duffield Drive section is ready to go into construction in the spring, Martin said, and extension of the trail from Duffield to Asylum, and maybe even beyond, is also contemplated.

Assistant Town Engineer Jim Brennan said outreach meetings will be planned, likely for February, with residents whose properties are in the vicinity of the trail between Fern and Duffield.

Construction of the trail itself – on the slice of property to the east of the watercourse but west of Trout Brook Drive – will likely begin in March or April, Brennan told We-Ha.com, and is slated to take roughly six months. Work will include the addition a retaining wall along a portion of the trail.

Julie Viera, a civil engineer with the town, is working on the design of the section to extend from Jackson Avenue to Park Road. She noted that in order to accommodate the constraints of bridge abutments, Trout Brook Drive will have to be narrowed a bit in certain areas to ensure the vision of Trout Brook Trail as a paved pathway that is separate from the roadway.

A roughly half-mile section of Trout Brook Trail, between Farmington Avenue and Fern Street, was recently completed and officially opened in July. 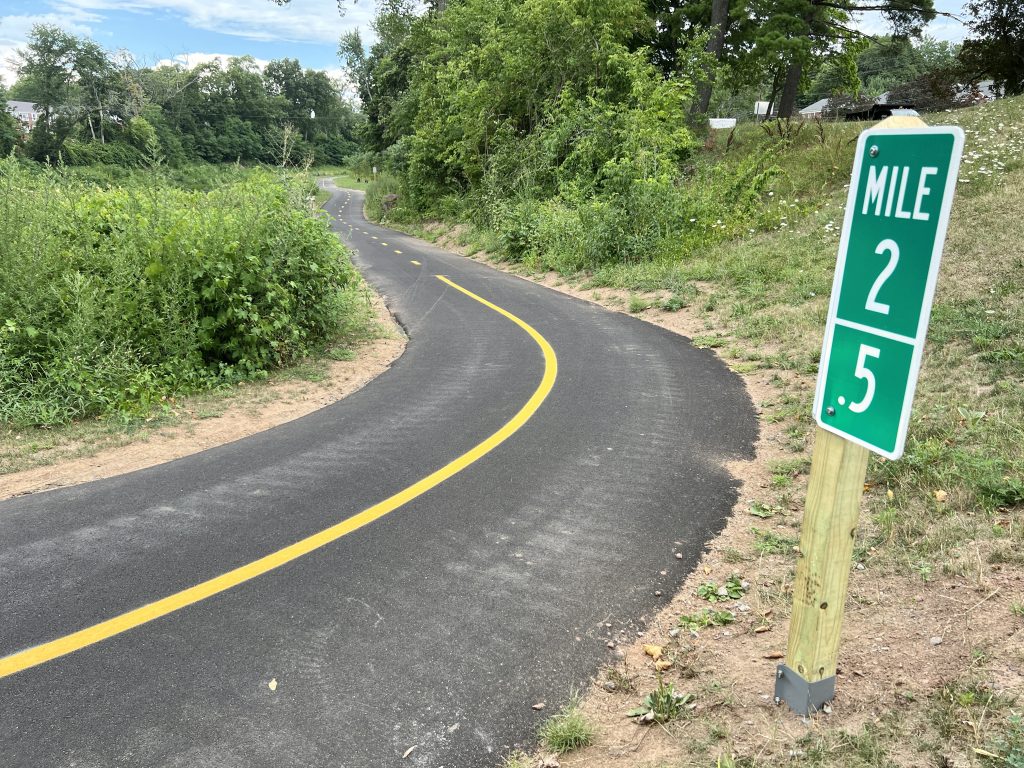 The trail has been built in phases, and will eventually extend 3.5 miles, from New Park Avenue to Asylum Avenue. The phases are numbered by blocks – each about a half-mile in length – from south to north, but have not been built in numerical order. The first phase to be completed, Phase 4, which runs between Park Road and Farmington Avenue, opened in 2008. Phase 1, from New Park to South Quaker Lane, opened in 2009.

Phase 2, which begins near Beachland Park on South Quaker Lane and ends at Jackson Avenue along Trout Brook Drive, was completed in 2015. The most recent section to be completed is Phase 5.

Fern to Duffield is Phase 6, Duffield to Asylum is Phase 7, and the 3,900-foot section from Jackson Avenue to Park Road that is currently being designed is Phase 3. 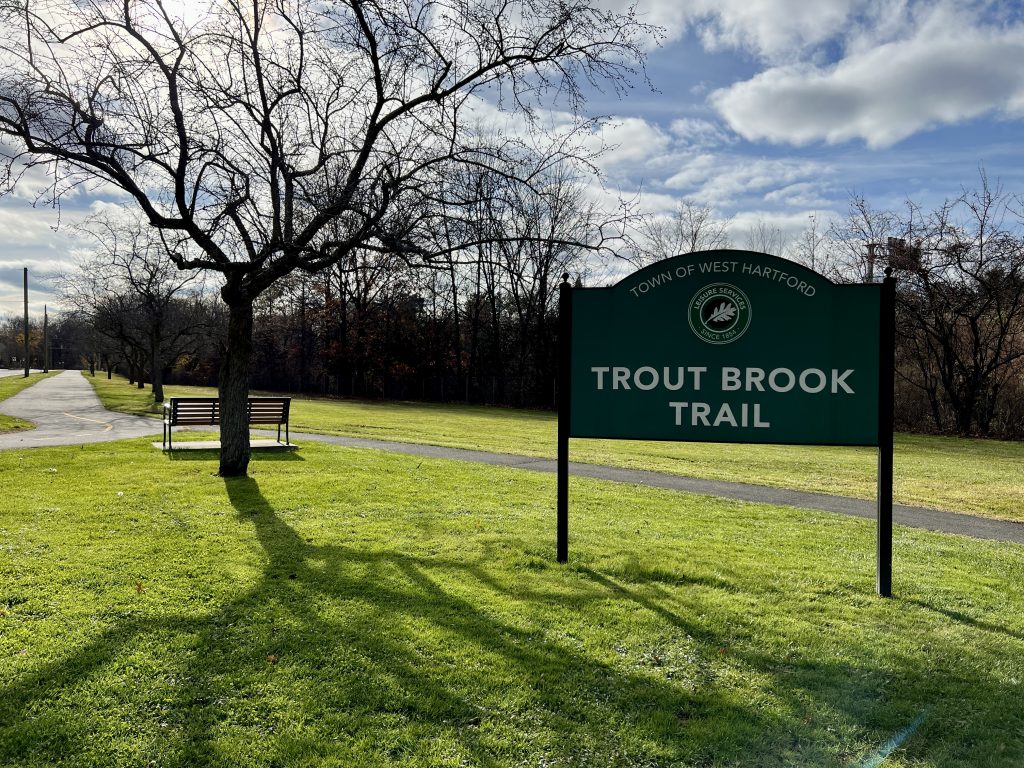