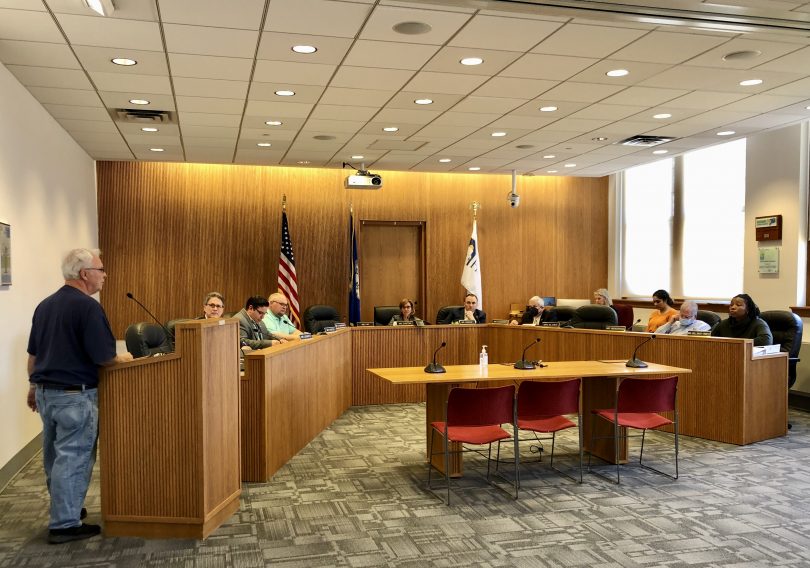 West Hartford resident Gary Muldoon expressed concern about the tax increase that he anticipates he will face when the new fiscal year begins July 1, 2022.

“It’s not a killer but it’s still, I think, substantial,” he said. “I know that the state seems like it’s getting in shape. We’re doing better, I know the town’s always trying to do better, but I still feel that we have to look at this budget again and see if we can do a little bit better than now.”

Muldoon said that while Connecticut, and West Hartford, are great places to live, “we haven’t handled our finances that well over the years,” and noted that the state still has an issue with unfunded pension liabilities.

“We still really have to look at the budgets, and I know again our property prices went up, and people are moving into town, but that’s only because of the pandemic. We’re probably going to go back to the same old thing where we’re starting to lose population and for what reason? Taxes.”

He said he hopes the Council will take another look at the budget and see what they can do for this year and future years to help out people like him, who are retired.

Muldoon also said he hopes more people express their concerns to the Council.

He was the only resident to address the Council during the budget hearing Wednesday afternoon. Democrats Mayor Shari Cantor, Deputy Mayor Liam Sweeney, Leon Davidoff, Ben Wenograd, and Adrienne Billings-Smith, and Republicans Alberto Cortes and Mark Zydanowicz, as well as Acting town Manager Rick Ledwith, were all present to hear from residents.

Many residents, particularly in the Elmwood section of town and the area north of Albany Avenue and east of King Philip Drive, have seen their property assessments increase by double-digit percentages, however, following the town’s revaluation, which takes place every five years as required by state statute.

A comparison of the estimated impact of the budget on the average homeowner has not been provided this year. While the Grand List increased by 12.2% overall, Ledwith noted in his presentation that changes in property values were not the same throughout all parts of town, making it difficult to determine what that “average” would be. Taxpayers can apply the proposed mill rate to their new assessed values to estimate how the change will impact them specifically.

The Town Council met for several hours as a committee of the whole for their first budget workshop Wednesday night, and will continue to examine the budget in detail over the upcoming weeks.

The public will have another opportunity to comment to the Town Council on the budget at the second public hearing, scheduled for Wednesday, April 6, at 6 p.m.

Details about the proposed Town of West Hartford’s budget can be found online.

The Board of Education has already held its first workshop, and remaining public meetings related to the West Hartford Public Schools budget include:

The proposed Board of Education budget is available on the West Hartford Public Schools website. Suggestions can be sent to [email protected].