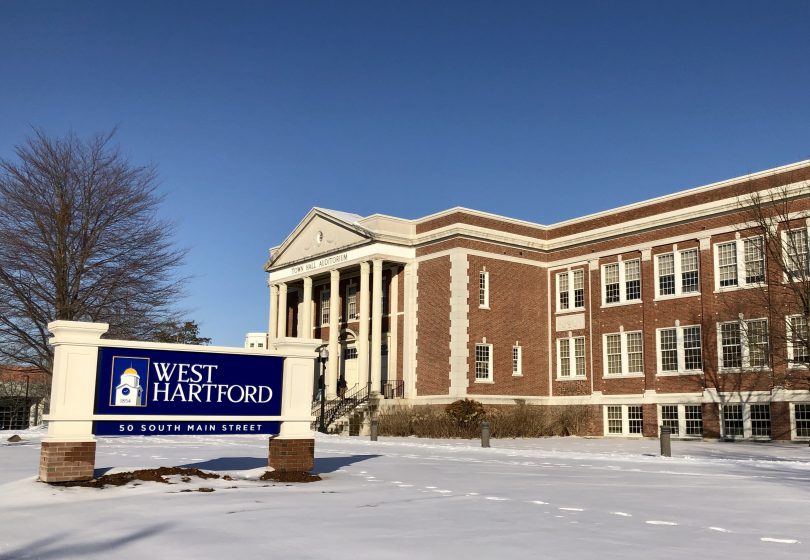 Acting West Hartford Town Manager Rick Ledwith proposed a $317.9 million budget Tuesday night that would result in a 3.06% tax increase, and the Town Council will meet over the next several weeks, and hold two public hearings, before deciding on the final spending plan.

Because of the town’s revaluation, which takes place every five years as required by state statute, a comparison of the estimated impact of the budget on the average homeowner has not been provided this year. While the Grand List increased by 12.2% overall, Ledwith noted that changes in property values were not the same throughout all parts of town, making it difficult to determine what that “average” would be. Taxpayers can apply the proposed mill rate to their new assessed values to estimate how the change will impact them specifically.

The FY 2023 budget is “a budget that we feel provides us with a clear path forward, one built on hope, resiliency, and community,” Ledwith said before breaking down the specifics of his proposal. Over the past two years, he said, the Town Council, Board of Education, and members of the community have worked together in ways that no one had previously imagined, finding innovative ways to meet the community’s needs.

“Today, we are hopeful that we are closer to the spring of 2019 than we are the spring of 2020,” Ledwith said. “Our students are mask optional for the first time in two years and the Connecticut Department of Public Health has directed communities to transition the management of COVID-19 in schools from a pandemic emergency response model towards a more standard public health approach to the management of respiratory viral diseases. We are hopeful that we will transition from a pandemic to an endemic but if we are faced with another variant, we know we have the strength, determination and the team to guide us through whatever challenge lies ahead.” 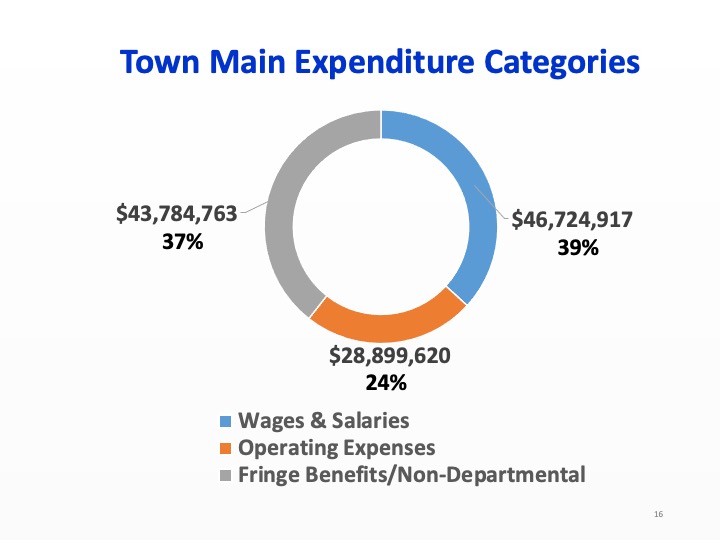 The town is a “people-based organization,” Ledwith said. One of the largest drivers of an increase in town spending is wages, projected to increase by $3.12 million or 7.16% – but that doesn’t mean staff are getting a 7% raise, Ledwith said.

“Most of this increase is due to the fact that we had four years of compounded retroactive wage adjustments for bargaining units that had expired and not ratified when we had adopted last year’s budget so they were budgeted in contingency and not in regular payroll.” There are also two minimum wage increases that will impact the FY 2023 budget (July 2022 and June 2023). In addition, three positions that had been defunded are being reinstated, two positions are being moved from part-time to full-time, and the proposal includes four new positions – two in finance, a Public Works mechanic, and an assistant director of Social Services. “This budget invests in our best asset, and that’s our employees who bring our policies, plans, and programs to life,” Ledwith said. 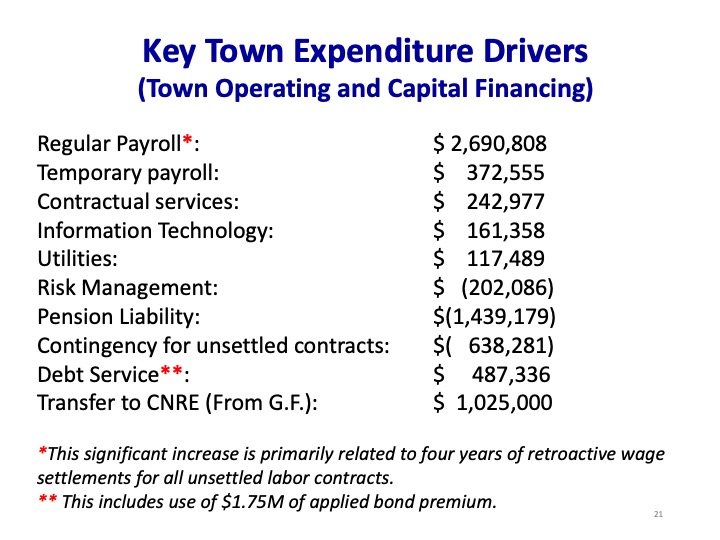 Benefits and insurance expenses are a net decrease of more than $2 million for the upcoming fiscal year, primarily due to the town’s successful sale of $323 million in Pension Obligation Bonds last June. The town’s pension funded ratio is now 101.5%, and over the next 25-30 years the strategic use of POBs is expected to save the town between $100-$150 million. “Saying this a different way, had we not issued our POBs we would potentially be taxing our community an additional  $2 million for the upcoming fiscal year,” Ledwith said.

The percentage of proposed general fund expenditures, by category, is outlined below. 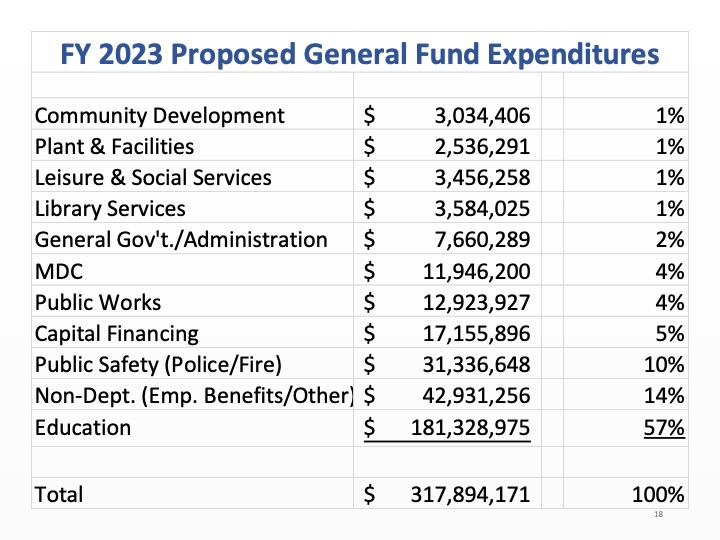 Ledwith said he believes the superintendent’s proposed budget is “fair and responsible,” takes into account the impact of the pandemic on the town’s children, “and maintains our investment in our future and allows our schools to continue to ‘clear paths’ to create bright futures with no limits for our 9,000 students.”

Major projects included in the Capital Improvement Plan include an investment in complete streets, flood mitigation, and the start of a 15-year air quality improvement project for the nine elementary schools that lack fresh air ventilation. “Good news on this front – there may additional funding available through the governor’s budget which would allow us to shorten the duration of this project by three years,” Ledwith said of the air quality improvement program.

On the revenue side, state aid – primarily Education Cost Sharing – is roughly unchanged. The governor has proposed a cap of 29 mills on automobiles, but since that is not guaranteed to be passed by the legislature, the budget contemplates a universal mill rate. Ledwith noted that if the capped mill rate passes, the town will modify the budget to reflect that reduction and the aid the state will provide the town in return to compensate for the decrease in property tax revenue. 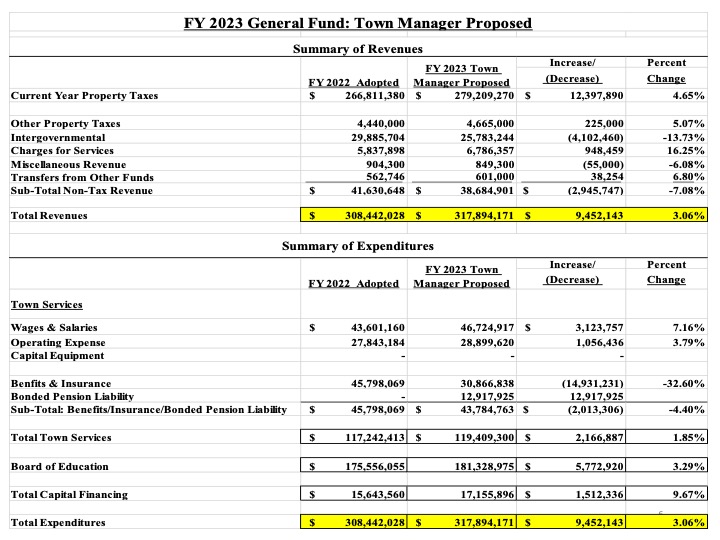 There is a $4.1 million decrease in Intergovernmental Revenue, but that’s because last year the town used more than $4 million in American Rescue Plan Act funds to compensate for lost revenue.

“We believe this budget addresses the diverse needs of our community while being mindful of our responsibility to our taxpayers,” Ledwith said. The budget “is a fiscally sound financial plan designed to provide outstanding services that are critical to maintaining our quality of life and our standing as one of the nation’s premier communities.”

The Town Council will be reviewing the budget in detail over the upcoming weeks, and will also hold several budget workshops.

All budget documents, including the Budget in Brief, will be posted on the town’s website for review on Wednesday, March 9.