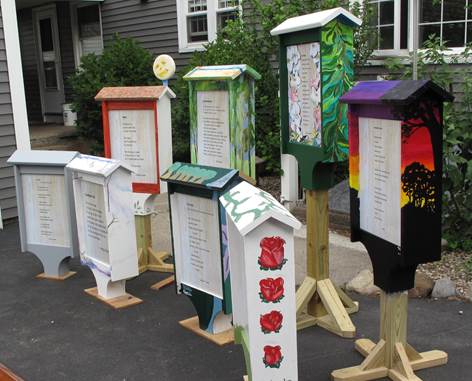 Decorated poetry stands are being installed in Fernridge and Westmoor parks in West Hartford. Photo courtesy of Ginny Connors.

‘Poetry in the Parks’ has now arrived with the installation of poetry posts in several of West Hartford’s parks.

Decorated poetry stands are being installed in Fernridge and Westmoor parks in West Hartford. Photo courtesy of Ginny Connors.

Ginny Connors had a goal of melding poetry and art in West Hartford’s beautiful parks, and that wish has now come true with the launch of “Poetry in the Parks” this weekend at Westmoor and Fernridge Parks.

On Saturday, the public is invited to tour the poetry at 3 p.m. at Westmoor Park and at 5 p.m. at Fernridge Park. Sunday is the rain date.

“West Hartford has such beautiful parks,” said Connors, who was West Hartford’s poet laureate from 2013-2015. “I thought, ‘Let’s get art and poetry in the parks,'” Connors said.

Connors said she put out a request for poems, and they “flowed in.” The only conditions she gave the poets were that the poems be somehow related to a park experience – either about nature, or relaxing in a park – and short enough to easily display. A committee of all of the previous West Hartford poet laureates selected the winners.

Connors said once the poems were selected, the next step was displaying them. She decided on a simple structure that was easy to install, with a consistent appearance but allowing for original expression. Each stand sits on top of a permanently-installed 8-foot post, 2 feet of which is buried in the ground. The tops, which are removable for the winter, are made of laminate that looks like wood. Connors’ husband, who is a teacher with some wood-working ability, constructed the 10 poetry stands.

Connors also put out a call for artists, who then “adopted the posts and poems” creating a unique and fitting decoration for each one.

Connors was able to raise some money to pay for the materials and provide a stipend to the poets and artists, she said. Most of the poets and the artists have West Hartford connections, Connors said, and some are students.

West Hartford Parks Supervisor Jim Robertson helped her find just the right spots, and the finished products were installed this week – five at Westmoor Park and five at Fernridge Park.

“Nature and poetry and art not only go together but enhance each other,” Connors said.

“I hope people happen upon them and enjoy them. They are they kind of poems that anyone can enjoy. This really adds something special to the parks,” Connors said.

The combination of poetry and West Hartford’s parks is not new to Connors, who had previously put together an anthology of poems celebrating Elizabeth Park, entitled “Where Flowers Bloom.”

It took about a year-and-a-half to make her dream a reality, and even though Connors is now retired from her two-year position as West Hartford’s poet laureate, she is still very much devoted to this project. Christine Beck, West Hartford’s current poet laureate, is also a supporter of “Poetry in the Parks,” Connors said.

Connors said it would be great to add to and expand “Poetry in the Parks” to other West Hartford locations, but said she would need additional funding. “And I would have to talk my husband into making more stands,” she said.

For more information about Connors, and for a complete listing of the poets, artists, and the text of the poems, visist Connors’ website.