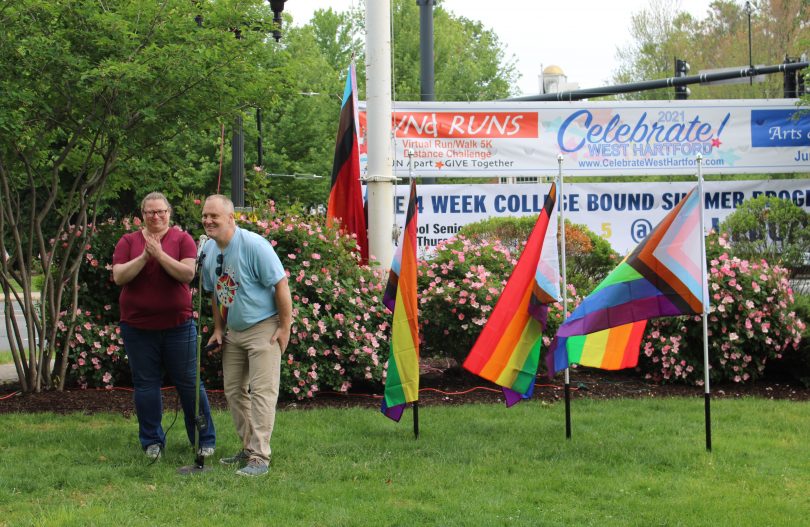 Pride Month began on Tuesday, June 1 in West Hartford, with a brief ceremony and the raising of the Pride flag. 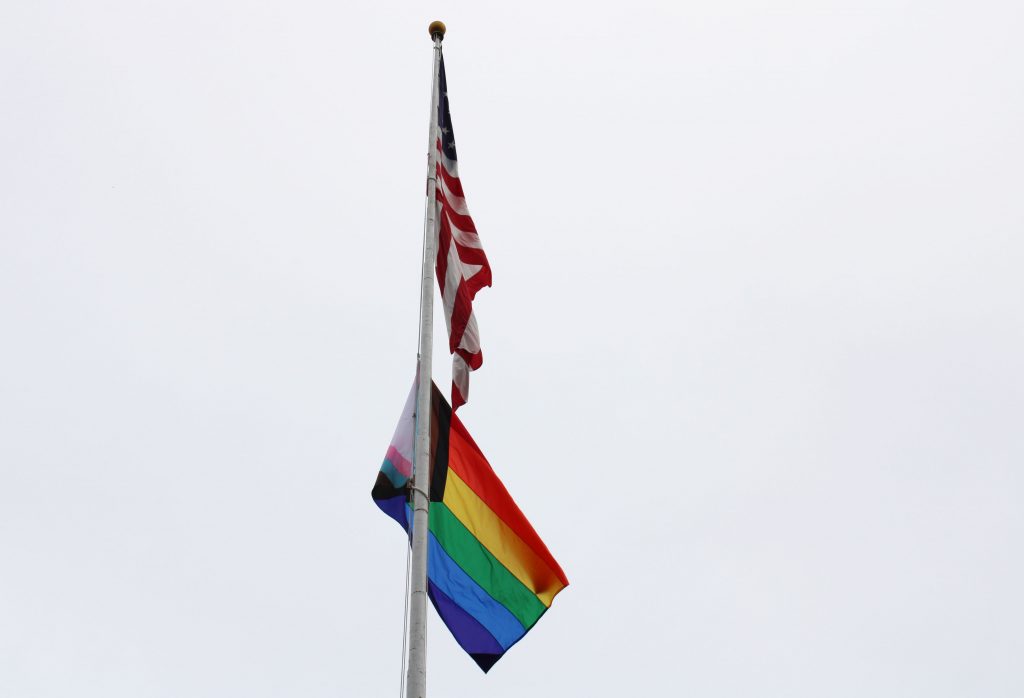 The Pride flag was raised over Unity Green in West Hartford during a ceremony June 1. Photo credit: Sophie Christensen

For the month of June – Pride Month – the American flag flying over the recently-renamed Unity Green in West Hartford Center will be joined by the Pride flag, which was raised Tuesday morning during a brief ceremony.

Roughly 50 people – among them West Hartford’s entire legislative delegation, several Town Council and Board of Education members, town staff, and members of the community – gathered for the ceremony.

“June 1 marks the beginning of the pride season, and West Hartford is ‘ground zero’ this year,” with a mix of in-person and virtual events planned throughout the month, said Barry Walters, co-chair of the West Hartford Pride Planning Committee.

“It’s so encouraging to see this crowd after the year we’ve been through,” said Johanna Schubert, also a co-chair. She noted that it was heart-warming to see so many people in person.

The flag-raising was one of the first events to take place in town since most COVID-19 restrictions have been lifted.

“So many hugs this morning,” Walters said. 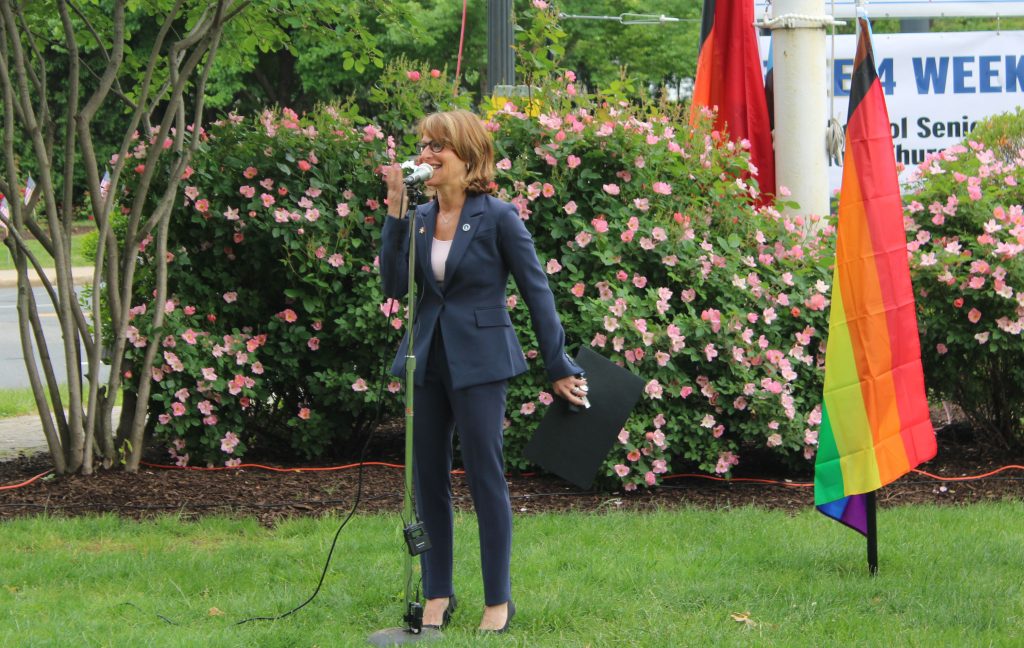 Cantor read a proclamation declaring June 2021 “Lesbian, Gay, Queer, Bisexual, and Transgender Pride Month” in West Hartford, and calling on the community to eliminate prejudice and bias, and to celebrate its diversity.

The Pride flag which will fly along with the American flag for the entire month, represents “light, healing, sun, calmness, art, and spirit,” Cantor said.

Pride flags have been raised at all West Hartford Public Schools as of Tuesday morning, Superintendent of Schools Tom Moore confirmed. 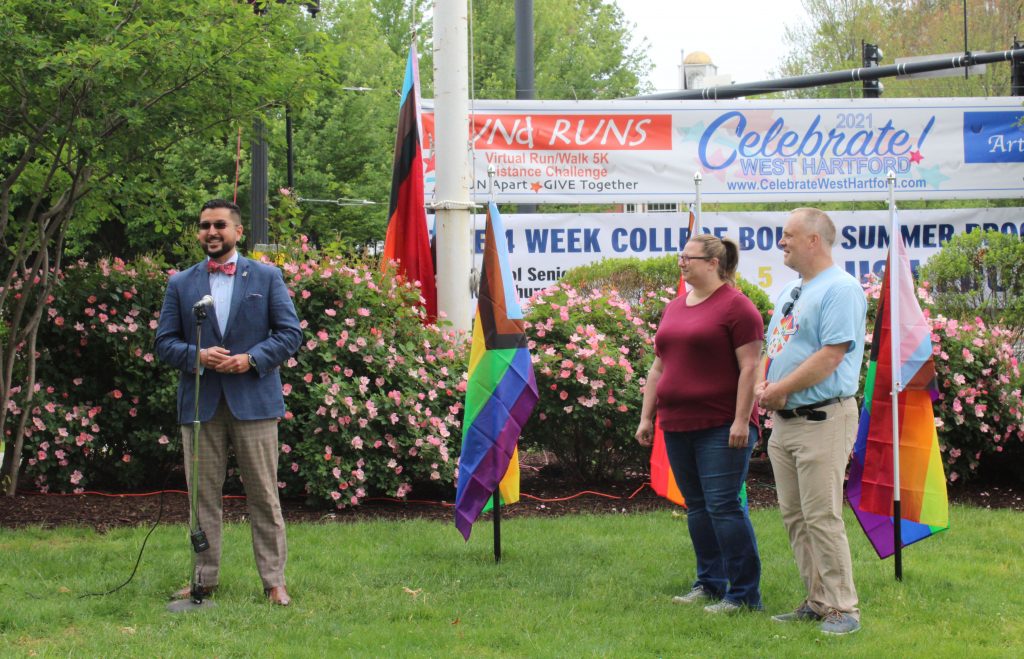 Steven Hernandez, executive director of the Connecticut Commission on Women, Children, Seniors, Equity & Opportunity, thanked West Hartford for raising the flag. “All over the state of Connecticut our flags are going up saying you are welcome here,” he said.

“It means so much to be standing here on Unity Green,” said Adrienne Billings-Smith, a member of West Hartford’s Pride Committee and former co-chair of the town’s Human Rights Commission, who was instrumental in bringing about the renaming of the town’s green, which formerly bore the name of a slave owner. The official dedication will be held at West Hartford’s Juneteenth celebration on June 19. 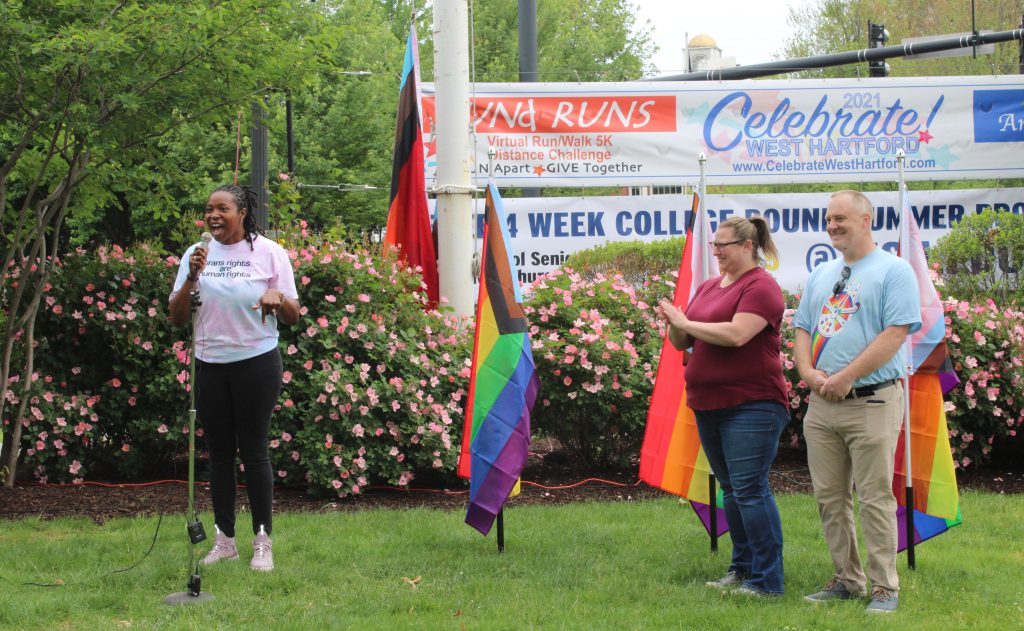 Billings-Smith said she recently led a youth panel, “and they told us we need to step our game up. … We have a group of young Nutmeggers who are leading the way for us and they are showing us what we can be in this community, in this state, and in this nation – and I love that.”

She also asked for a moment of silence, to note the 23 trans people murdered in the country since May 12, to think about those who are no longer with us. “They deserve the right to live freely and happily in this country. … Remember that Pride was a protest for liberation,” Billings-Smith said.

This year’s flag is the Quasar Progress Pride flag, and is much larger than the Pride flag flown the past several years, and as it was raised, Aaron Scott and Carl Delmolino, members of the Connecticut and Hartford Gay Men’s choruses performed for the crowd.

“We relate and celebrate each other and unite in the fight for love and justice,” said Scott. 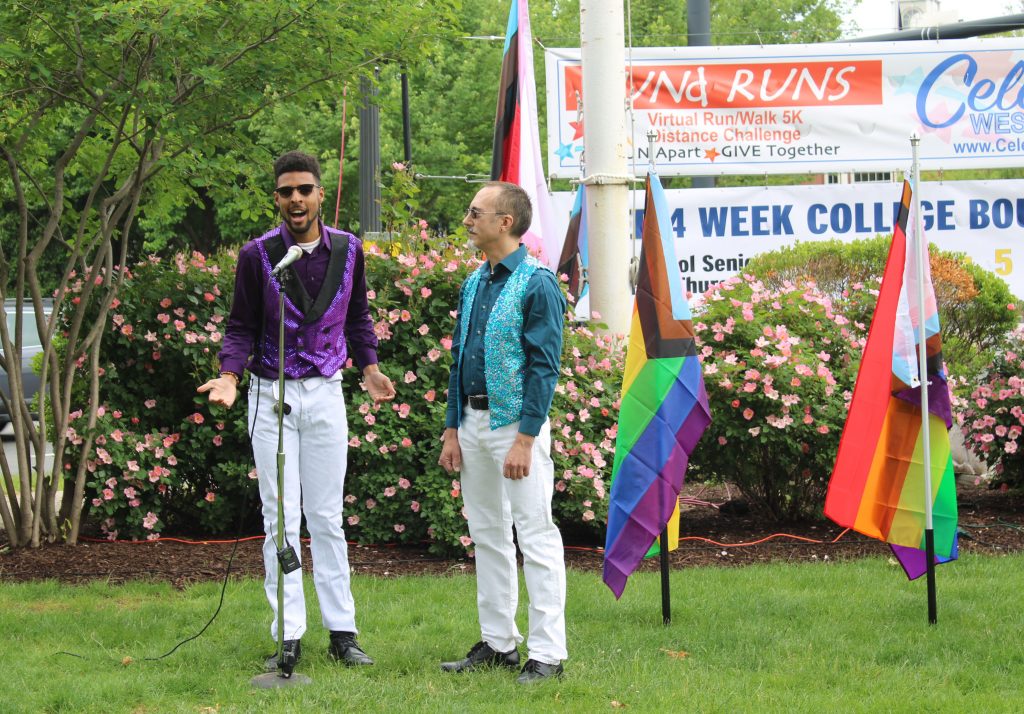 Aaron Scott and Carl Delmolino, members of the Connecticut and Hartford Gay Men’s Choruses performed for the crowd as the Pride flag was raised in West Hartford on June 1. Photo credit: Sophie Christensen 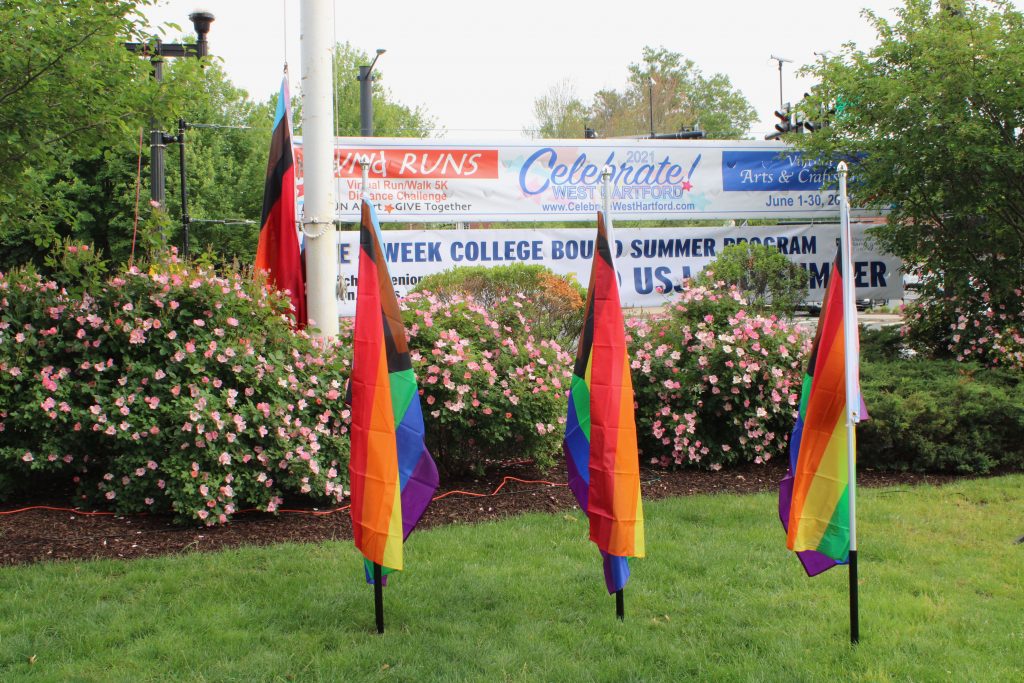 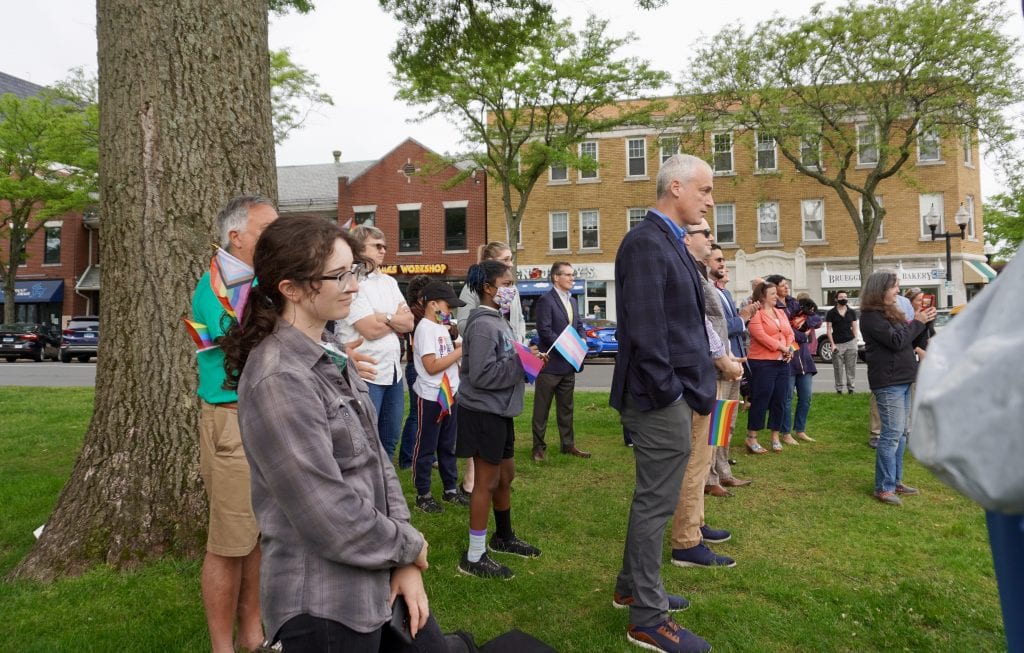 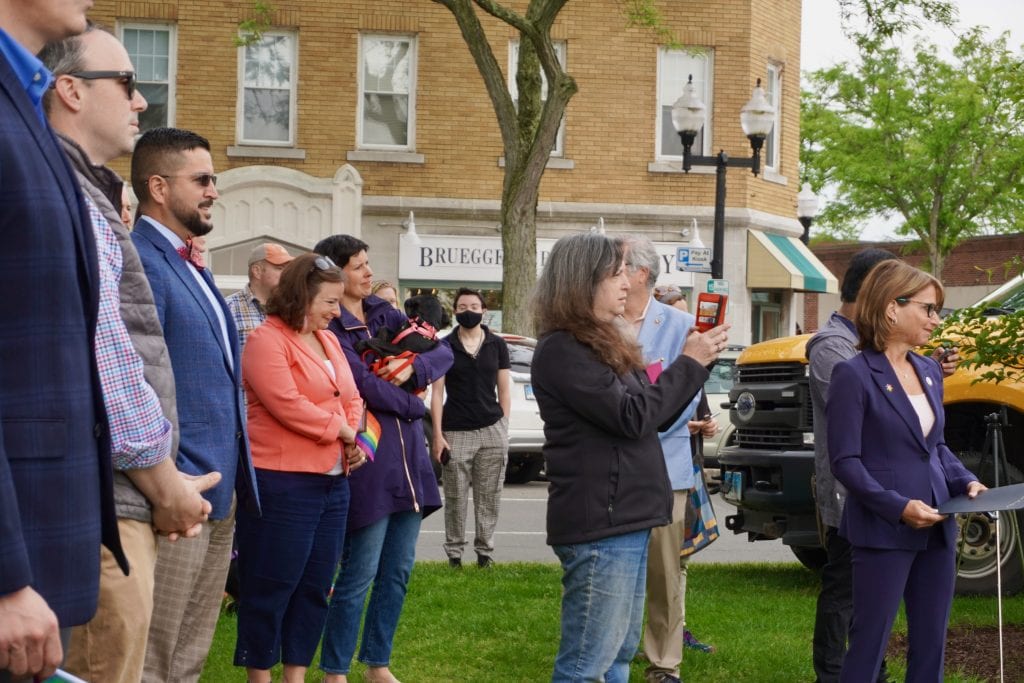 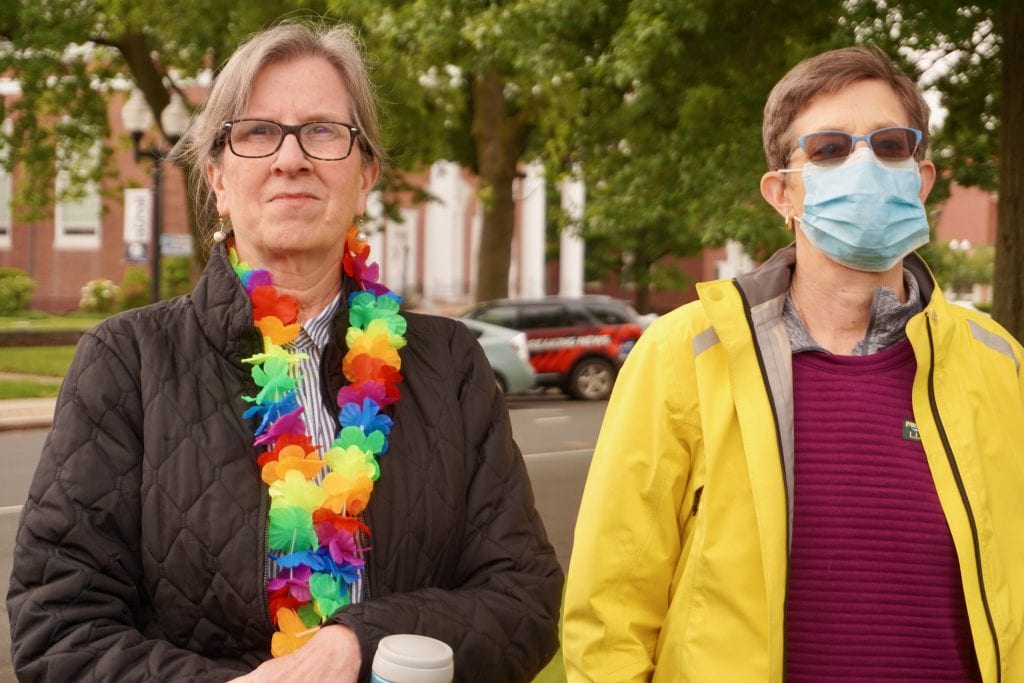 Judy Wyman Kelly (left) and Dr. Tracey Wilson were among those who attended the Pride flag raising in West Hartford on June 1. Photo credit: Ronni Newton

Future events over the course of the month include a “Pride Night” at the GastroPark on June 11, as well as an art festival. More details can be found here.