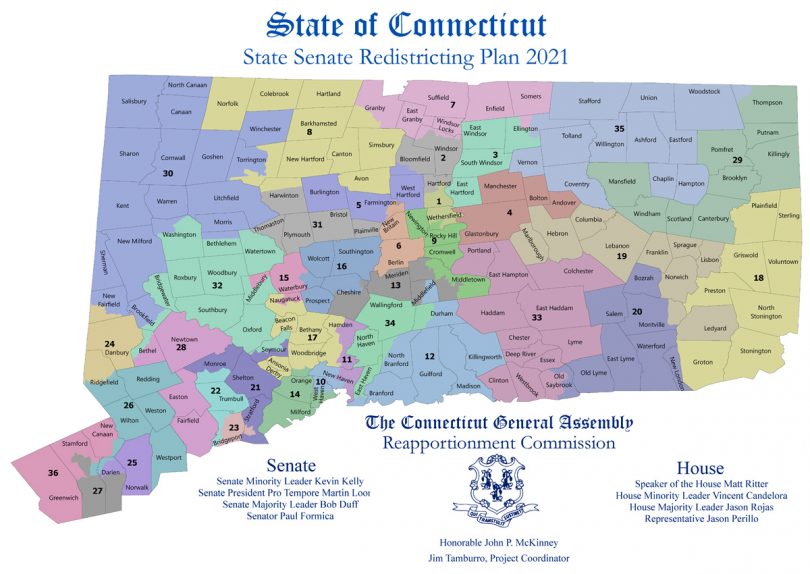 Changes to the the 5th district, represented by Derek Slap of West Hartford, affect only a small slice of Bloomfield. 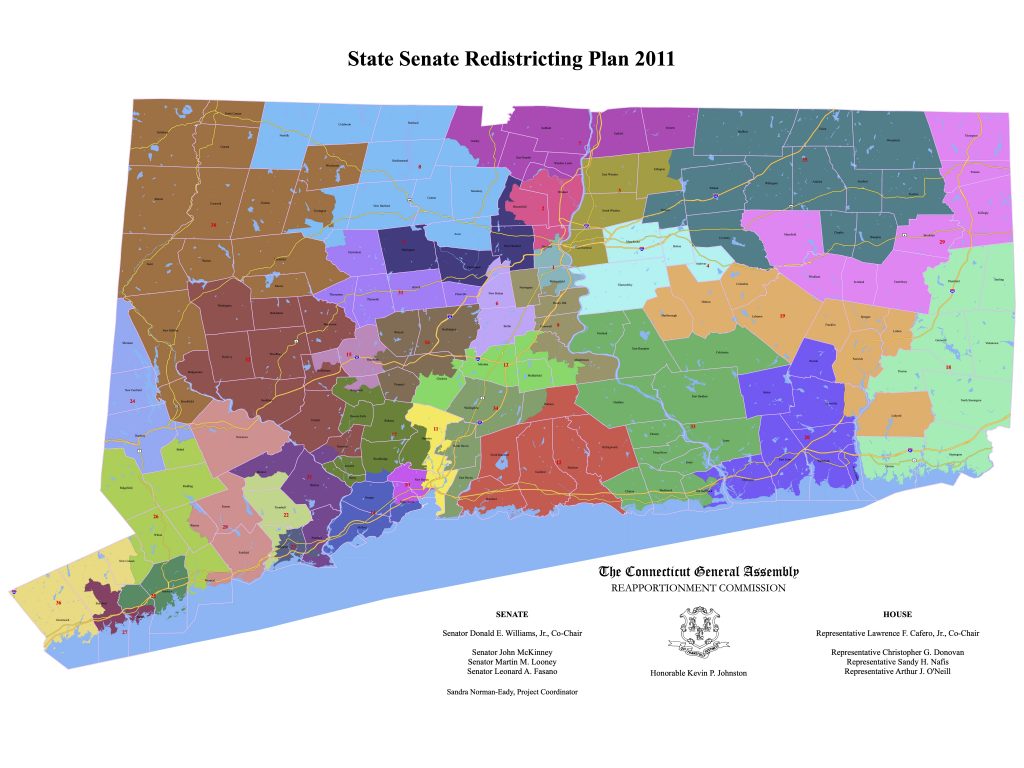 The unanimous vote of the nine-member Reapportionment Commission comes less than a week after the same group approved a map for new state House districts to reflect population changes recorded by the once-in-a-decade U.S. Census survey.

The panel acknowledged Tuesday it would need to seek an extension from the state Supreme Court for its final task, a map of new lines for Connecticut’s five congressional districts. The group turns its attention now to that politically-fraught process just a week before a Nov. 30 deadline.

The biggest changes to state Senate districts come in and around the city of Stamford, which grew by nearly 13,000 people, according to the census. The growing population density was driven in part by an influx of new residents amidst the COVID-19 pandemic.

“So you had a cluster of districts neighboring each other, all of which had to lose population,” Looney said Tuesday. “That was a particular challenge.”

The most obvious divergence comes in the 26th District, a patch of southwest Connecticut, which is represented by Westport Democrat Will Haskell, and did not previously even border Stamford. The new map pulls a thread of the 26th down between New Canaan and Norwalk and into Stamford’s city lines.

Members on both sides of the aisle said the region posed the most significant difficulties.

“You had a large influx into Danbury and Norwalk. Based on that, Fairfield County became a real issue,” Senate Minority Leader Kevin Kelly said. “That was a challenge.”

But while the population explosion in Fairfield County made drastic changes unavoidable, throughout the rest of the state the commission managed to minimize change by leaning into rules that allow districts to deviate from their 100,000-resident population target by 5% in either direction.

“We had eight districts overall that had no changes at all and several others that had minimal changes with less than a couple thousand people moving between districts,” Looney said. “Where changes were not necessary, we didn’t make them. We really only responded to where the numbers dictated.”

The consistency is most notable in the less-populated eastern half of the state where the census recorded a decline in residents but the commission made minimal changes to the voting districts.

Meanwhile, the city of Hartford, which also posted a declining population, maintained its two Senate districts but the panel adjusted their boundaries. The 1st District, represented by Democrat John Fonfara, expanded further into Wethersfield. The 2nd District, represented by Democrat Doug McCrory, gained more than 1,100 people in Bloomfield but lost some in Windsor.

Both Looney and Kelly were reluctant to speculate on how the new changes would impact their party’s standings in future elections. Looney noted that in the 10 years since the current maps were drawn, control of the state Senate has ranged from a two-thirds majority by the Democrats to, at one point, a virtual tie between the parties.

“It shows you that things happen within a decade that cause political change that might not have been foreseeable in the way the districts were drawn,” Looney said.

Kelly agreed, saying Connecticut’s redistricting process prevented too much favor in one direction or the other.

“The political ramifications in Connecticut are mitigated by the fact that this is a bipartisan commission,” Kelly said. “Neither party wants to give this responsibility to the court. Given that, there’s a push and pull but focus on how we get to a consensus. But what we try to do is get this right.”

The panel will now begin work on remapping Connecticut’s congressional districts. In that process, they will not be allowed the same flexibility to deviate from their population targets of roughly 721,000 residents per district. Still, members seemed confident Tuesday they could arrive at a consensus in a matter of weeks if the court awards an extension.

We-Ha.com is the place to go for the latest information about West Hartford – a town that "has it all"! We-Ha.com is part of and proud of our community, and we bring a hyperlocal focus to news and features about the people, schools, businesses, real estate, sports, restaurants, charitable events, arts, and more. Contact us at: editorial[email protected] or [email protected]