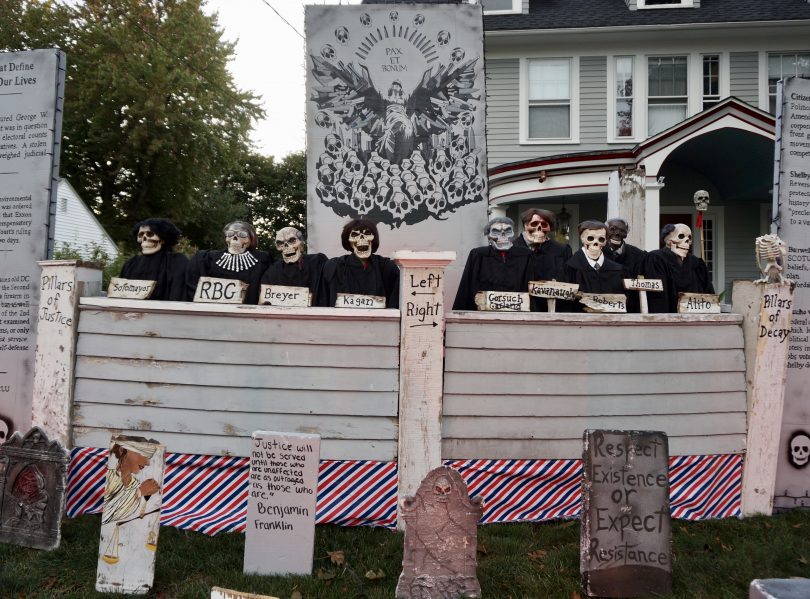 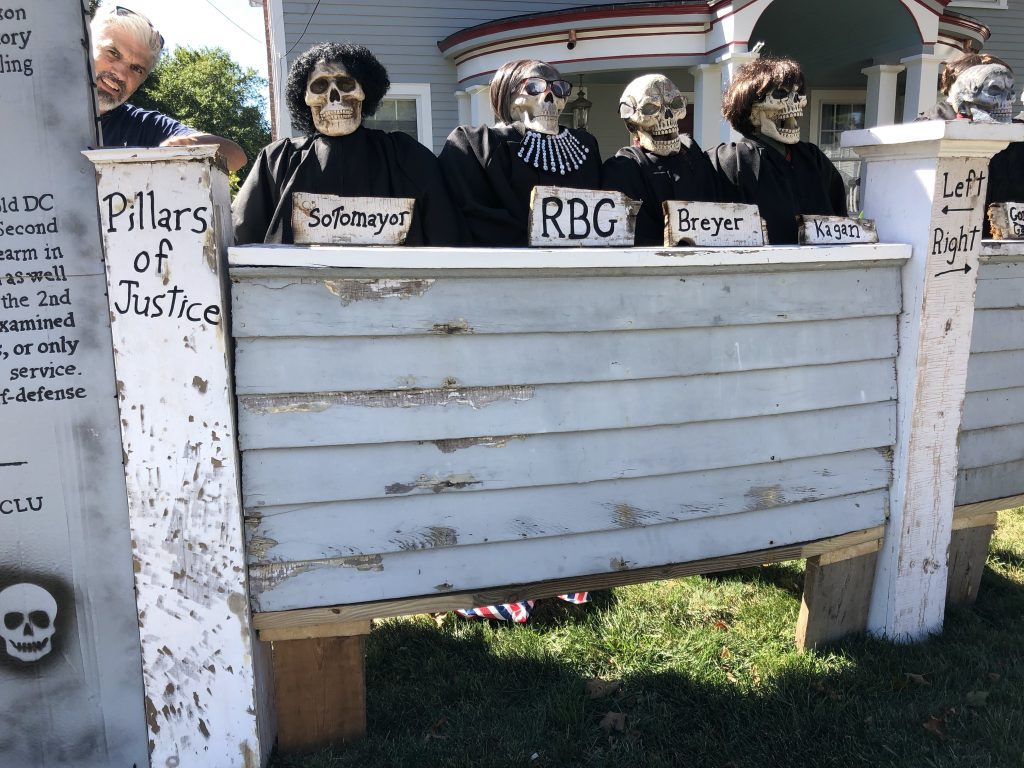 Matt Warshauer on his front lawn Sunday, as he and a group of friends were erecting this year’s Halloween display. Photo credit: Ronni Newton

West Hartford resident Matt Warshauer ‘s North Main Street front lawn is once again filled with a scary cast of characters, as this year’s Halloween display makes a thought-provoking statement about the idea of justice.

“My goal this year was to try to be as non-partisan as possible, but to put forth ideas about justice,” said Warshauer.

There are tombstones scattered about with a variety of quotes about justice, and front and center on his lawn is a bench – and behind it are the members of the country’s highest court.

“The entire court is represented – the bench and all nine justices,” Warshauer said in an interview as he finalized plans to set up his display.

The Supreme Court justices all have skeleton heads, but Warshauer has added identifying accessories and other touches to each figure.

“RBG has her bling, but they are also named so people know who they are.”

Each year Warshauer finds ways to reuse parts of his previous displays, but this year he is also reusing parts of his own home.

“This spring and summer I rebuilt my front porch, and I saved the columns,” he said. He said his oldest daughter said he tackled the porch project just so he could use those columns.

Looming above the justices – literally – is a larger-than-life image of a Roman woman. The image, on a 4-foot-by-8-foot panel, was painted by Warshauer’s youngest daughter, Jessie, based on an image he found while doing research on images of justice as the guardian of liberty.

“I found this Roman woman, her arms up in the air, feathers made of rifles, swords, and bayonets, bullets above her head,” he said.

The Latin message that appears above the image: “Pax et Donum.”

It means “peace and goodness,” Warshauer said. “The irony is you’ve got justice standing above skulls, and with those words.”

Warshauer, a professor at Central Connecticut State University and a political historian, has become known for creating elaborate and message-laden Halloween displays for well over a decade.

Last year’s display had the theme of the “death of democracy,” and he gave passersby a chance to comment. After Halloween, he updated the display with an urgent call for people to vote.

The previous year he built a “pirate ship of state” last year, a massive structure that followed his 2016 display – an elaborate and overtly-political “Trump wall” that garnered national and even international attention in the midst of a vitriolic election season. Past displays have included a Vietnam scene complete with a downed helicopter and the the Roman Colosseum.

While this year’s display can perhaps be interpreted without as much in-depth reading as last year’s, its thought-provoking message is really found in the two panels that outline seven Supreme Court decisions, made since 2000, that Warshauer has highlighted as having the most impact on our democracy and lives. Many were rendered before the court’s current conservative bent.

The decisions include a few that most will recall – like Bush v. Gore (2000), Exxon Shipping Co. v. Baker (2008), and Citizens United v. Federal Election Commission (2010) – the latter which protects political donations by corporations as “free speech” and in Warshauer’s opinion is one of the most troubling challenges to democracy – where every vote counts – as opposed to plutocracy.

“The Federal courts don’t have the right to step in and make decisions about gerrymandering,” said Warshauer, who believes that should be one of the court’s important functions. 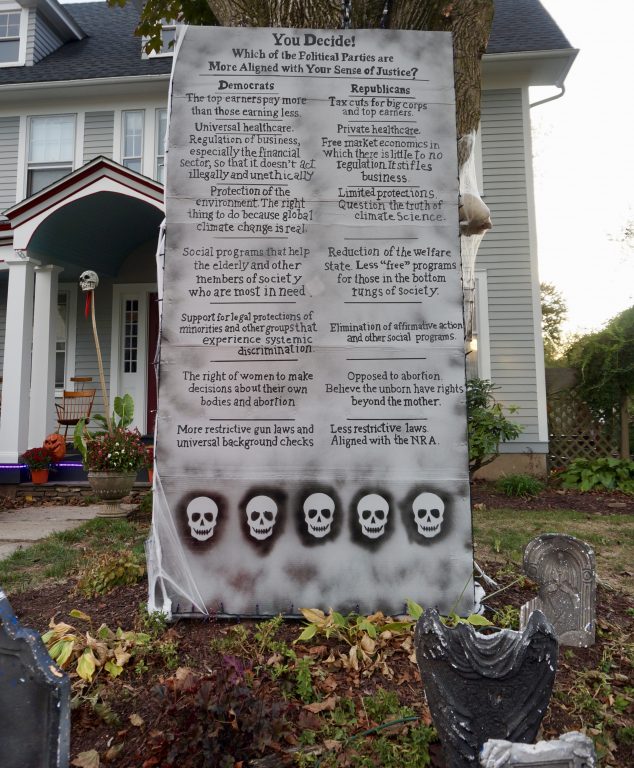 “You decide!” dealers one of the panels in this year’s Halloween display on Matt Warshauer’s 115 North Main St. home. Photo credit: Ronni Newton

There’s also a panel that overtly challenges the community to think: “You decide! Which of the two mainstream political parties are more aligned with your ideas of justice?”

To the left (of course) are broad statements about the Democratic Party stance on tax policy, healthcare, environment, social programs, discrimination, abortion, and gun laws. The Republican Party stances are on the right.

“They are a series of very brief statements,” Warshauer said. “Like the Democrats believe the wealthy should pay more in taxes and the Republicans believe tax cuts should apply to all.” There are statements about universal vs. private healthcare, regulation of businesses vs. a free market economy, social programs for the needy vs. a reduction in the welfare state, and restricting gun laws with universal background checks vs. less restrictive gun control.

While Warshauer doesn’t hide his own liberal views, he wanted these statements to be accurate and objective. Before he finalized them, he gave them to a conservative friend and colleague for review.

“I think this is pretty accurate,” he said. He’d like the community to consider which statements they believe point toward justice.

Warshauer’s own opinion is: “What is justice is so demonstrably clear. … One is messed up and has its issues, but clearly is on the side of justice.”

As always, Warshauer designs his displays to get people to think, and to talk about issues that he thinks are critically important for the country’s democracy.

“We need to get more young people involved,” he said.

“They have rights and liberties only because we have a certain political system. Is democracy a right or a responsibility?” Warshauer said. “The reality is, it’s both.”

Warshauer said that people have been asking about the display for the past several weeks. A few days ago he was cutting down a branch and a guy was jogging by and stopped. “He asked if I was cutting down the branch for the display,” and was glad to hear that it was going up this weekend.

One element that has appeared the past few years is noticeably absent from this year’s display.

“I was contemplating whether or not to put up Trump’s head, and decided not to because I’m tired of seeing his face,” said Warshauer.

Warshauer said he is open to discussing and debating all ideological views, but personally won’t contain his own disdain for the current president. “He’s a toxin on the soul of this country.”

And while there has been plenty of political fodder lately that Warshauer contemplated including in his display, he said he resisted the temptation to include a panel on Federalist 65 – which deals with impeachment – and kept to the topic of the Supreme Court. 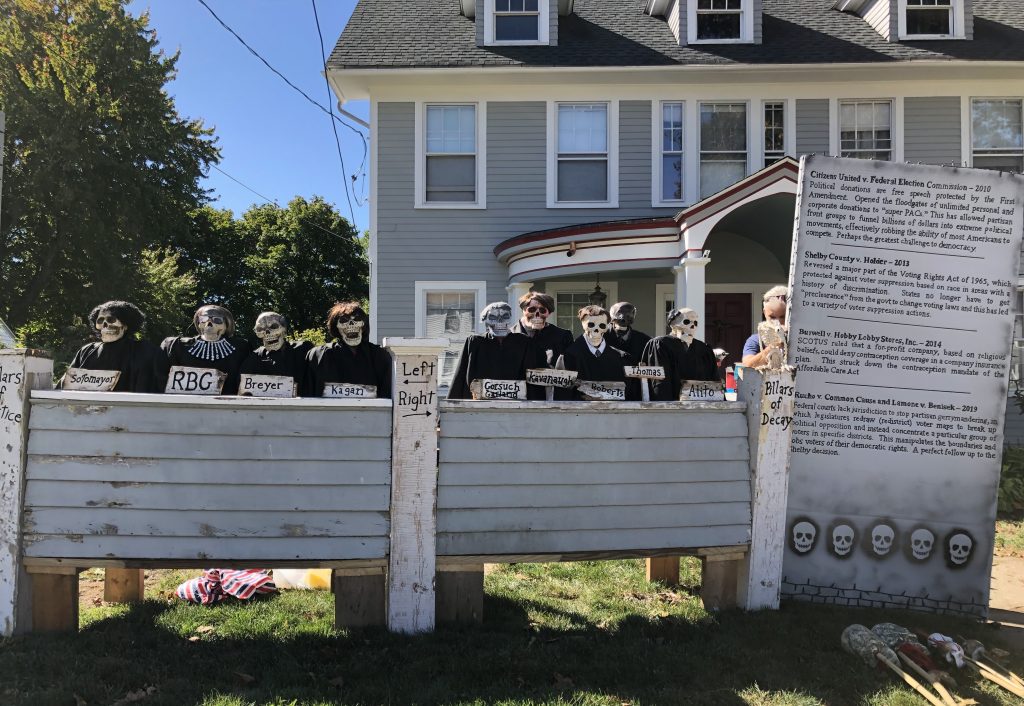 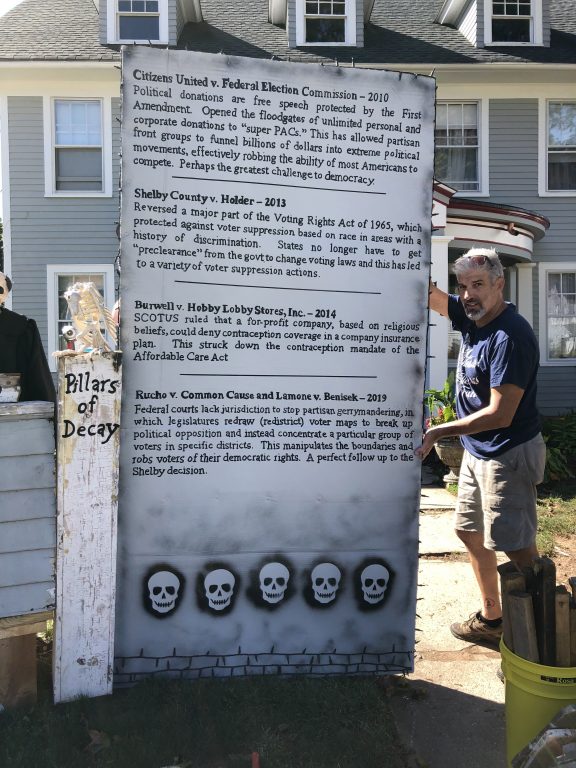 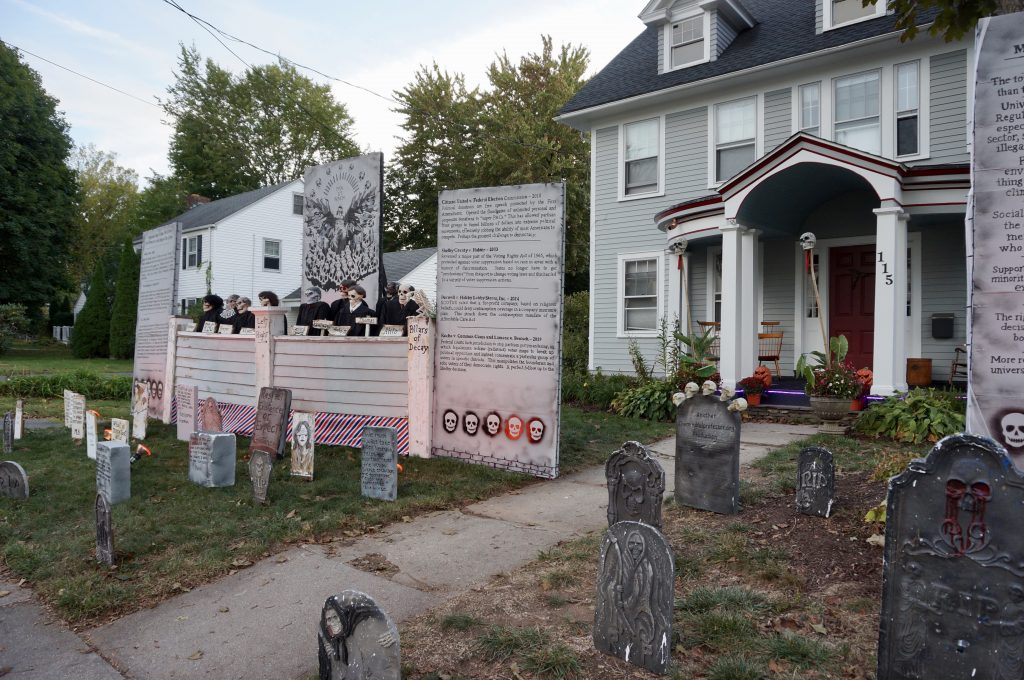 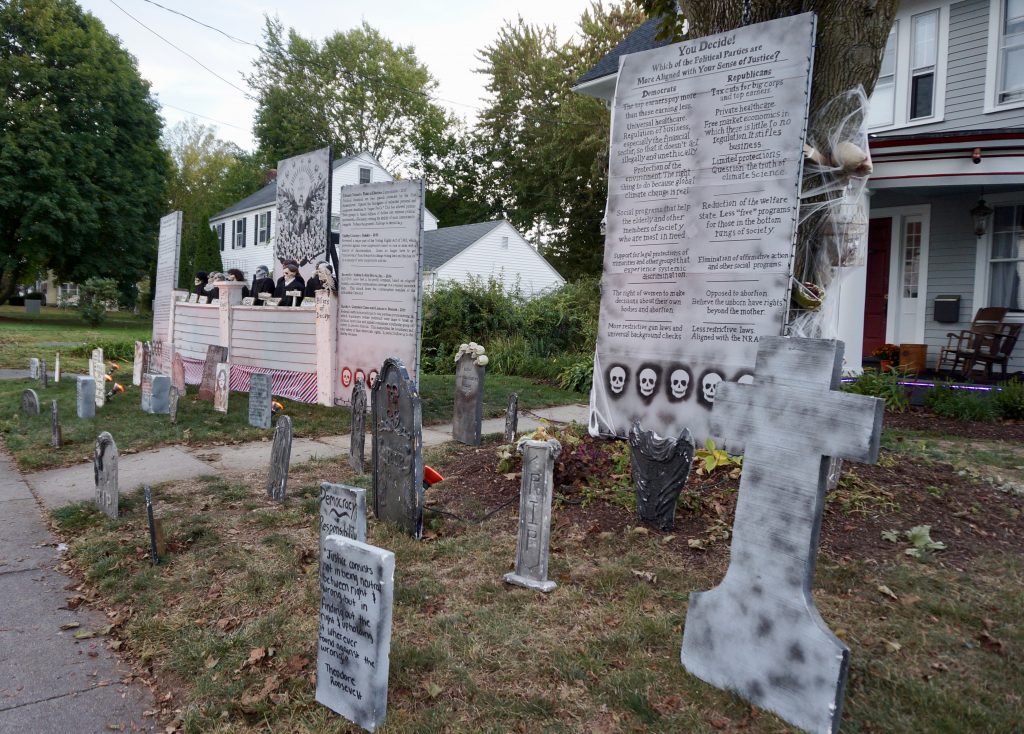 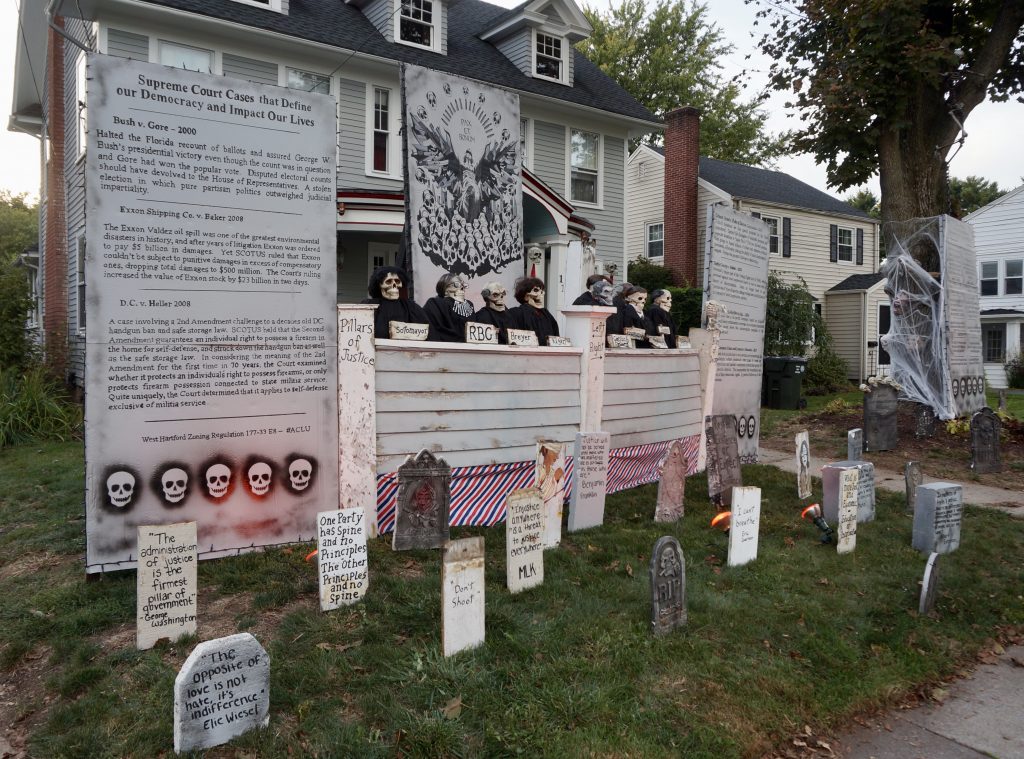 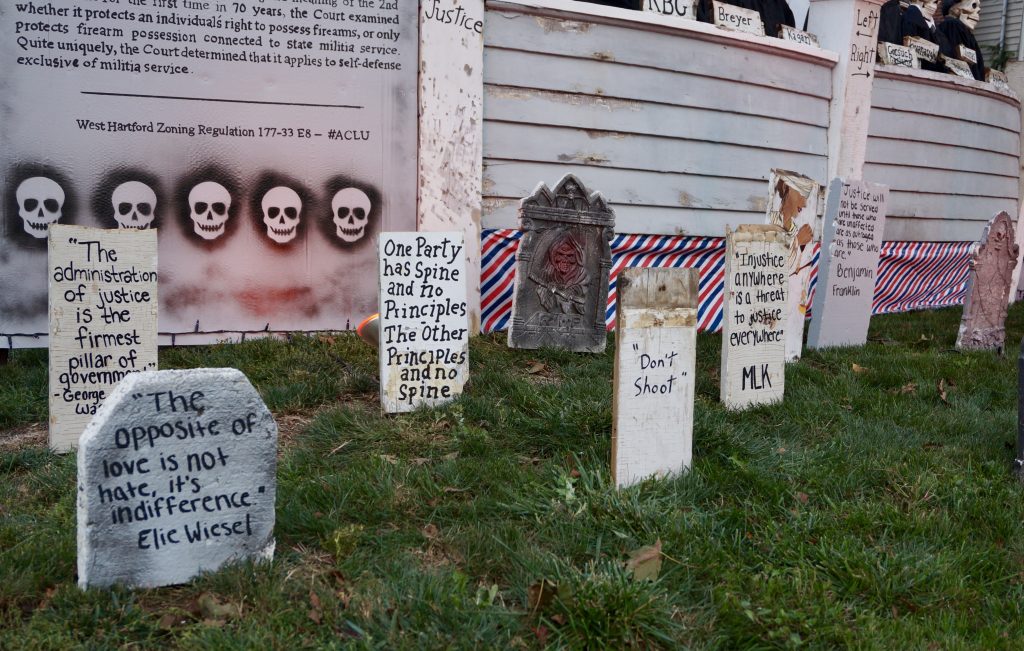 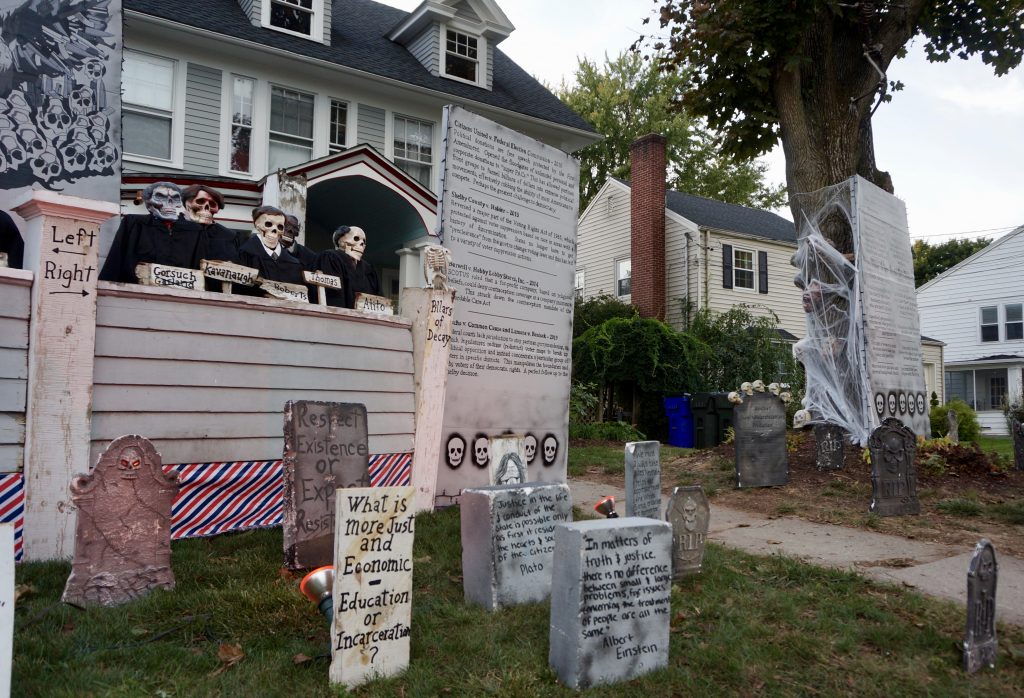 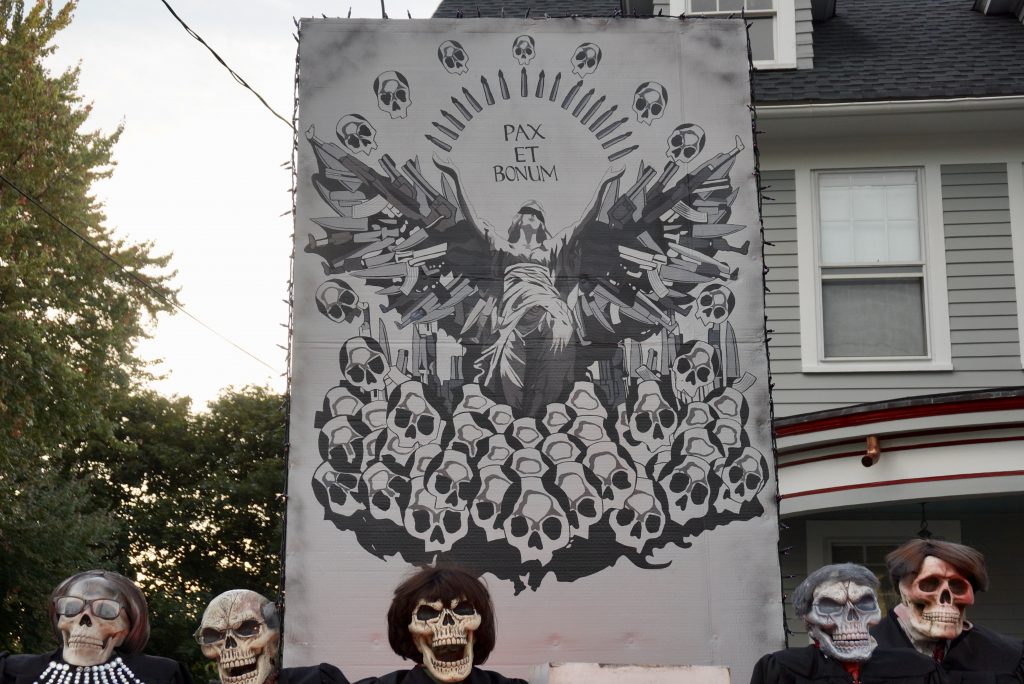 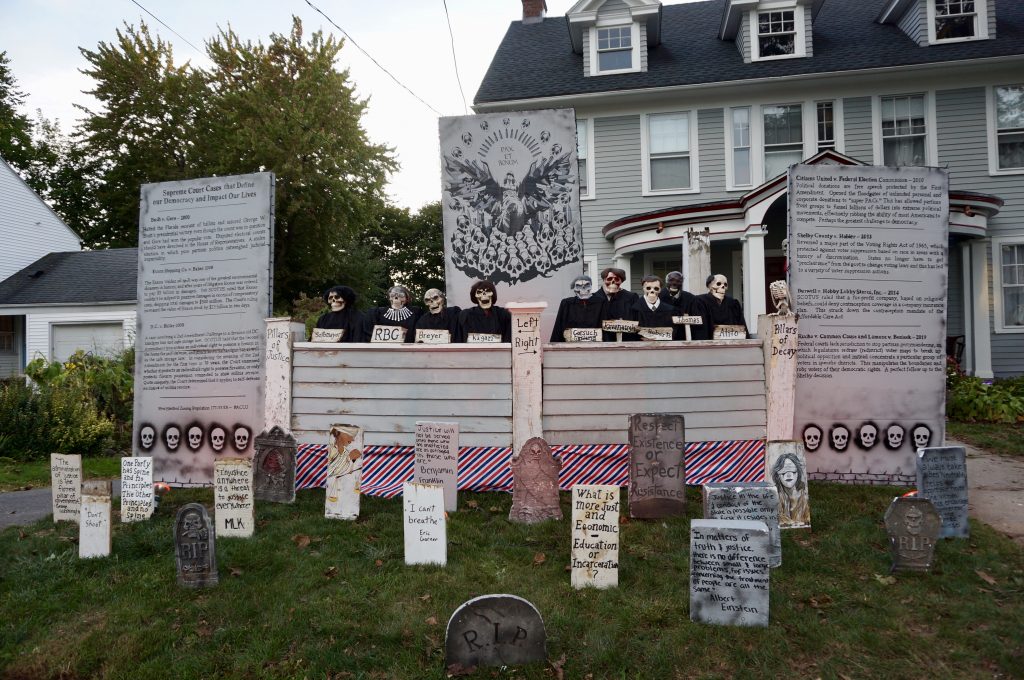 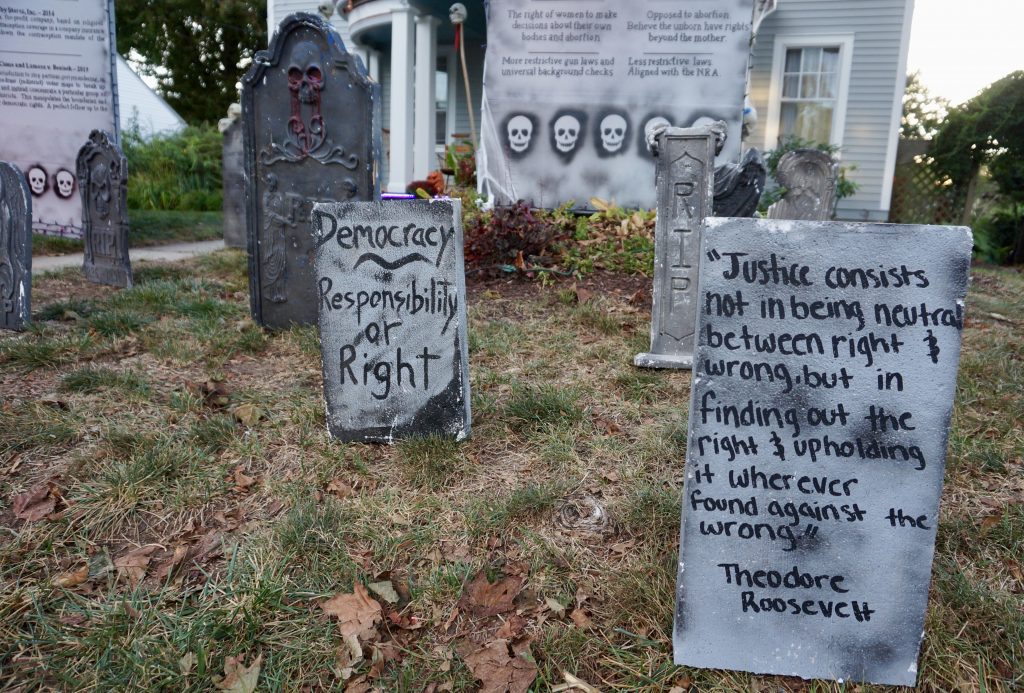 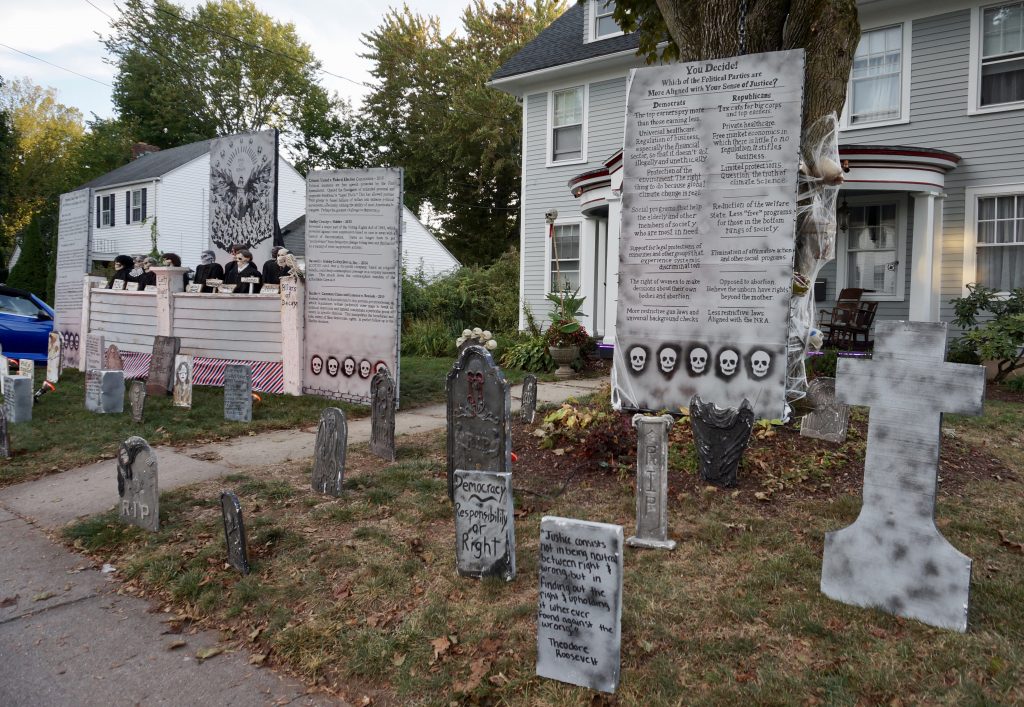 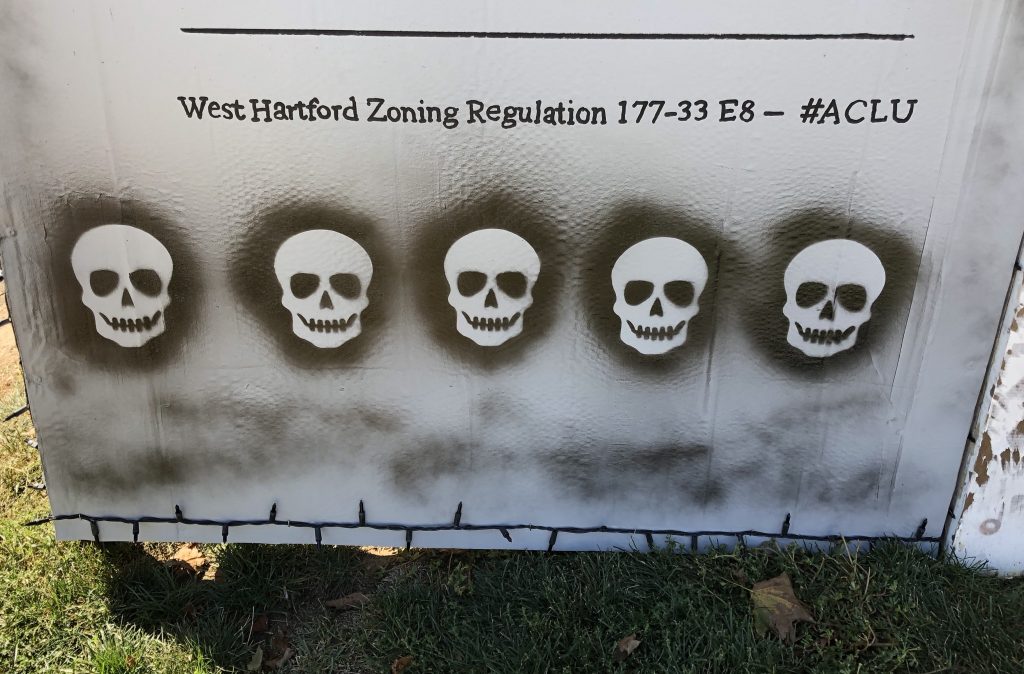 Just in case there are people who question Matt Warshauer’s right to have his display … Photo credit: Ronni Newton