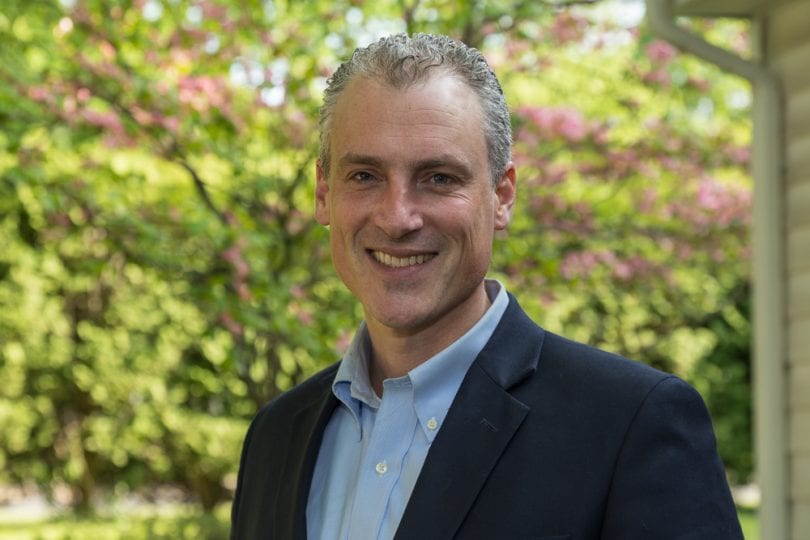 State Sen. Beth Bye, who was re-elected in November for her 5th District seat, will not take the oath of office next week, leaving an opening that Slap, as well as some others, have expressed an interest in filling.

As news spread Wednesday morning about State Sen. Beth Bye’s appointment to lead the Office of Early Childhood, congratulatory messages for Bye were quickly followed by speculation about who will succeed the popular lawmaker in the 5th District.

“I am planning on running,” State Rep. Derek Slap, 45, who was re-elected to his second term in the 19th State House District, told We-Ha.com.

Slap said he hopes that Red Sox fans won’t take offense at this comparison, but he sees taking over for Bye as “running to be the Yankees shortstop after Derek Jeter.”

Slap said that Bye has very big shoes to fill. “We need someone to protect our town, to be a strong advocate,” he said. Slap said that he has worked closely with Bye and already developed a reputation for bringing people together to solve problems..

He also has experience working in the State Senate, having previously served as chief of staff for Senate Democrats from 2007-2014.

Slap said his work in getting the pay equity bill – which became law on Jan. 1, 2019 – passed with nearly unanimous support is just one example of his successes as a legislator and collaborator.

“I have learned a lot from Beth and consider her a mentor,” Slap said. In his praise of Bye, he said, “She cares, she listens, and she is genuinely great person. She doesn’t put on any airs and that’s one reason why she has a great reputation as a state senator.”

Slap said he spoke with Bye on Tuesday night, as well as with others who have encouraged him to pursue the seat, which includes Burlington, Bloomfield, and Farmington. As 19th District representative, he already represents parts of Farmington.

Slap said he is already contacting supporters, reaching out to delegates, and working hard at communicating.

The process of filling Bye’s seat will begin with the convening of delegates from the 5th District – the same group of delegates who nominated Bye last year. Republicans, or other party organizations, can also nominate a candidate. A special election – open to all voters in the district – will follow about 46 days later.

Jonathan Slifka, chair of the West Hartford Democratic Town Committee, said that the state party will schedule the convention because this is a state position and also involves multiple towns. News of the soon-to-be-open seat was just made public a few hours ago and he has not yet received confirmation about when the convention will take place, but said it will likely happen quickly.

Slap said Wednesday that he is not aware of anyone else who plans to run, but that doesn’t mean there aren’t others interested.

“I have not heard from anyone else,” Slifka said regarding West Hartford Democrats other than Slap who have officially expressed interest in running for Bye’s seat. He has not yet heard of interest from candidates in the other towns in the district either.

West Hartford Mayor Shari Cantor, in her comments about Bye’s appointment, made it clear that she was not interested in the seat.

While no one else has officially announced candidacy, there are other names being mentioned as possible successors to Bye.

Another possible candidate is Janée Woods-Weber, a West Hartford resident who is currently a member of the state committee for the Working Families Party. Woods-Weber is an attorney and director of organizational culture with the William Caspar Graustein Memorial Foundation.

Jillian Gilchrest, who defeated 12-term incumbent Andy Fleischmann in the 18th District Democratic primary in August and beat Republican Mary Fay in the November election to earn the House seat, said Wednesday that she hopes that the process of choosing Bye’s successor is very open.

“People in West Hartford want to be part of it,” Gilchrest said.

Gilchrest added that she feels very strongly that a woman should replace Bye.

Gilchrest will be sworn in with a freshman class of representatives that includes more women than ever before. “This election showed the biggest gains for women, and I would love to see that continue,” she said.

“I would consider it,” Gilchrest said when asked if she would be interested in Bye’s seat.

“Certainly it’s an opportunity,” said Deputy Mayor Beth Kerrigan on Wednesday when asked if she would consider pursuing the seat. She said that she feels it’s important for the seat to “go to someone who is as progressive as Beth Bye is.”

Kerrigan said she has not made any decisions, and would not do so without discussing it with her family. “There are a lot of good candidates for this very important position,” she said.

On the Republican side, West Hartford resident Mark Merritt, a financial service professional who challenged Bye for the 5th District seat in 2016, told We-Ha.com that he is considering a run for the seat.

Slifka also said that he believes it’s important that filling the seat be an open process. He encouraged anyone who is interested in running to reach out to him.

If Slap is elected to fill Bye’s seat, then a convention and special election to fill his seat would be held.