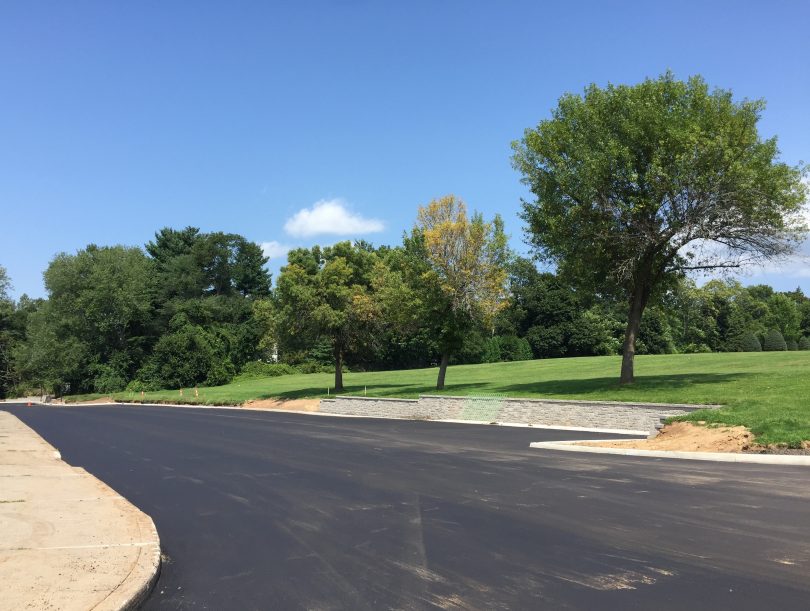 Hall High School's driveway has been widened to allow for two rows of buses for drop-off and pick-up. Photo credit: Ronni Newton

Here’s what you may want to know, and links to what you may need to know as classes resume for students in West Hartford Public Schools on Wednesday, Aug. 29, 2018. 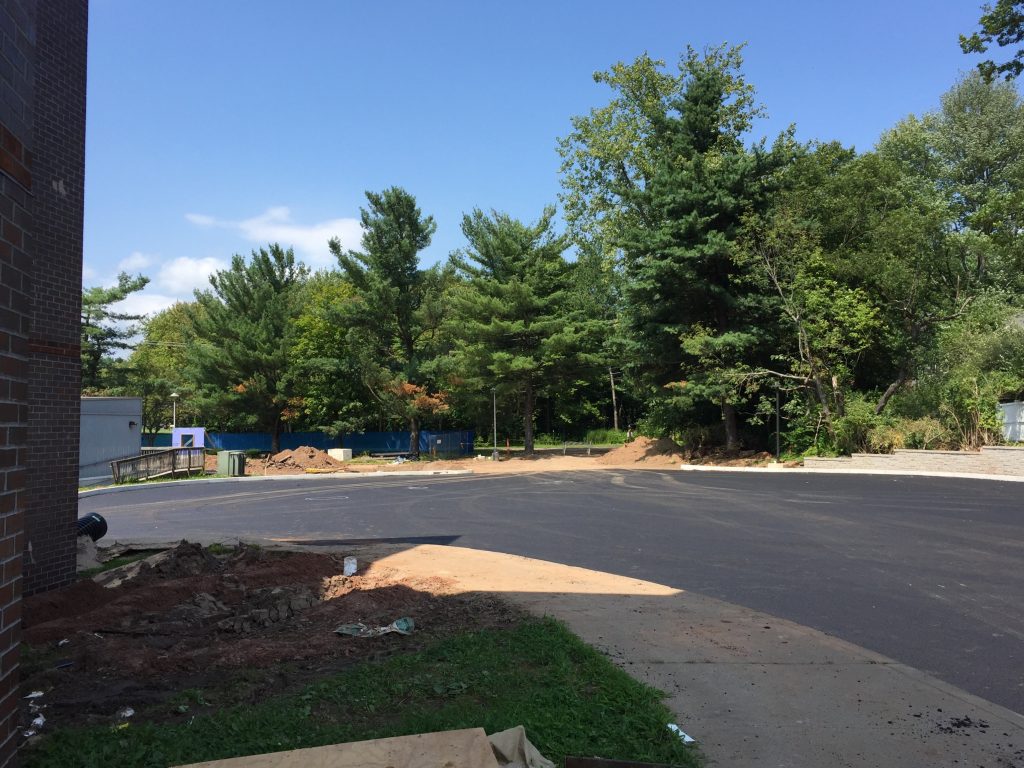 More than 9,500 students will begin the 2018-2019 academic year in West Hartford Public Schools on Wednesday morning, and Superintendent Tom Moore said that he is expecting a very smooth start to the year with no changes at all in principals throughout the system for the first time in 25 years.

“The stability is fantastic,” said Moore. With everyone coming back, they are ready to move forward.

Although the principals have not changed, there are, however, 65 new staff members joining West Hartford Public Schools. New teachers underwent training on Thursday.

“That’s way up from last year,” Moore said during an interview on Friday. He said that there were about 40 new staff members hired for the start of the 2017-2018 academic year.

There were 43 retirements among teachers, administrators, and staff at the end of the last academic year, some of which happened over the summer. Other hires were made because of teachers moving out of the area, or moving on to positions in other towns.

Hall, where there has been an uptick in enrollment, has the most new staff members – in the teens, Moore said.

In terms of new teachers, Moore said that this is the “most diverse hiring class” to join the district. They are diverse in terms of race, as well as age, with some teachers coming out of retirement and others just graduated from college in 2018.

The elementary school population is currently on a decline, so there would be fewer teachers being hired at that level other than as replacements for retirees or those who have moved on. This year, Moore said, “the veterans are excited about having so many fresh, new teachers.”

Three of the new elementary school teachers are teaching at the schools that they themselves attended, and district-wide, there are at least 15 West Hartford Public Schools alumni coming onboard this year. About half of the new hires live in town.

“That’s really what we want in West Hartford,” Moore said.

One of the initiatives that has existed in town for a few years is “Future Educators of Diversity,” a program in partnership with Central Connecticut State University that encourages current high school students to enter the field of education and come back to teach in West Hartford. “The idea really is to build a bridge,” Moore said, and the program, which includes a mentorship element, begins freshman year and is starting to come to fruition. The program is garnering national attention, Moore said.

While there are no new principals, both Hall and Conard have filled assistant principal jobs from inside the district.

Sarah Isaacs has been named an assistant principal at Hall, taking over for John Guidry who is now principal at Ellington High School. Isaacs was formerly a team leader and English/language arts teacher at King Philip Middle School.

Tor Fiske, formerly supervisor of School Counseling in West Hartford, is now an assistant principal at Conard. Moore said that Fiske really wanted to return to working directly with students. He replaced Eileen Eustis, who took a job as a principal in Berlin.

In addition, Melissa Cook has been named a department supervisor in Pupil Services, replacing Roz Dowbrowolski who retired. Cook was previously a supervisor in Special Services with Wethersfield Public Schools.

The refurbishing of eight science classrooms at Hall High School was completed over the summer, and construction is set to begin on new science labs, Moore said. That has necessitated a change in the drop-off and pick-up locations, with a new area for the buses to line up. Hall families have been advised of the changes.

The driveway on the east side of Hall (behind the veterinarian’s office), has been widened, with the paving of an additional 15-foot-wide swath of the lawn where Hall’s graduation ceremony is held. Graduation will not be impacted.

At the end of that driveway, a new bus turnaround loop has been created, and the large buses will now enter the driveway, turn around, and line up in a double row to pick up and drop off students, Assistant Superintendent Andy Morrow said.

Special needs students who are in self-contained classrooms on the west side of the school will now be able to more conveniently access mini-buses that will line up in an area in the back of the school.

Other than the work at Hall, Morrow said that summer construction was “typical,” including some flooring and roof replacements. A new auditorium has been completed at Norfeldt, and some exterior doors have been replaced. 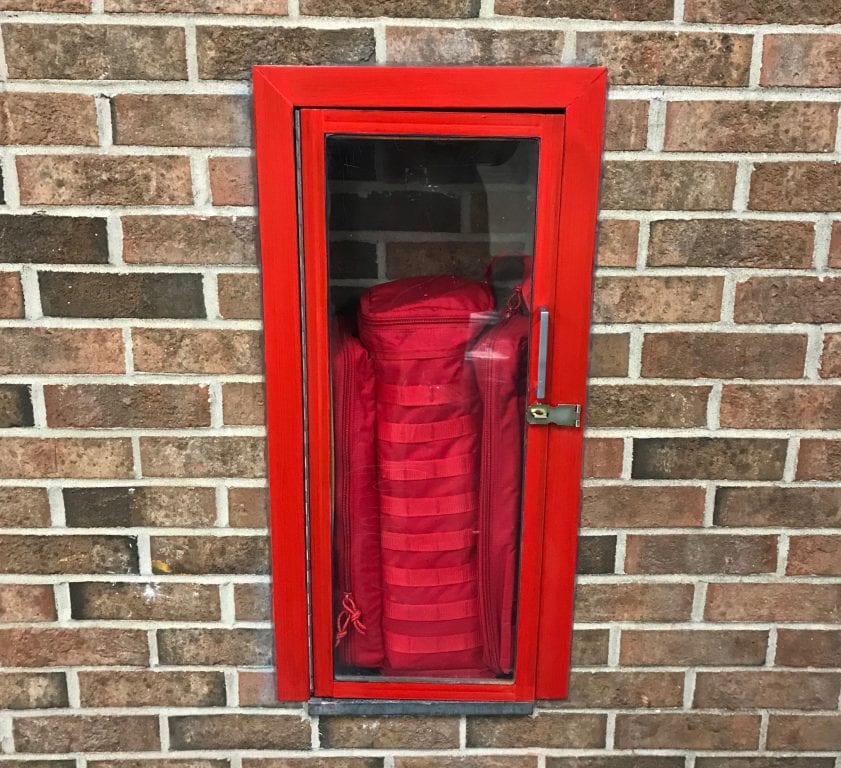 In addition to the upgrading of exterior doors, included as part of the construction and renovation plans are other projects to enhance the safety and security of buildings.

A special shatter-proof film has been added to some school windows. Morrow said the film, which is invisible, is “force-resistant,” and while it is not bullet-proof, if shot at it will not yield. “It stops the penetration,” he said.

“It was applied in a lot of places this summer,” Moore said, and will be applied in other locations as well. He is not able to specify which locations have had or will have the film installed.

Morrow said that the emergency response time to all town schools is about two minutes, and the installation of force-resistant film will add valuable time to allow police to arrive.

In addition, all West Hartford Public Schools administrators have now been trained in the use of bleed bags, including how to apply tourniquets – a continuation of training provided to school nurses and security guards earlier this year. The training, held last week, was completed in collaboration with West Hartford Police and Hartford Hospital and led by Off. Brian Wallace and Dr. Richard Kamin.

“We felt it was important for the administrators to be trained by police, so that they are able to assist the nurses in training the rest of staff,” Morrow said.

“It’s not just for a crisis or emergency response to a shooter,” Morrow said. The kits will be a valuable tool in the event of a serious injury on the playground or some other type of traumatic injury.

Moore, entering his fifth year as superintendent, will speak to all of the district’s teachers at the annual convocation ceremony at Conard on Monday morning..

Last year’s convocation message was about stability at a time when worries included the budget as well as the violence that had just taken place in Charlottesville. This year the message will focus on leadership.

While Moore doesn’t want to reveal too much of the content of Monday’s ceremony in advance, he said, “I want to give people the power to be leaders.” He will also focus on believing in every child in his planned message.

Administrators brainstormed over the summer about how to make things better for kids, Moore said, and he plans to conduct similar sessions with teachers. What he wants all to consider is what needs to be done to plan ahead to equip students with the skills they will need in 2030, in 2040.

This year’s kindergartners will graduate from high school in 2031, Moore said. “What should schools look like to prepare them?” Moore said. That’s what teachers will be asked to consider – and the focus will not be on fads, but rather on skills, the most obvious of which is how to work effectively as part of a team.

There is a dearth of candidates in the state to fill high-end manufacturing jobs, Moore said. Schools also need to focus on a math/science curriculum “in addition to a strong liberal arts education that makes kids love coming to school.”

The schedule for West Hartford Public Schools will not change for this year, but the Board of Education is continuing its study of school start times. Moore said that the Board will likely return to the “Rethinking School Start Times” discussion of delaying school start times in October.