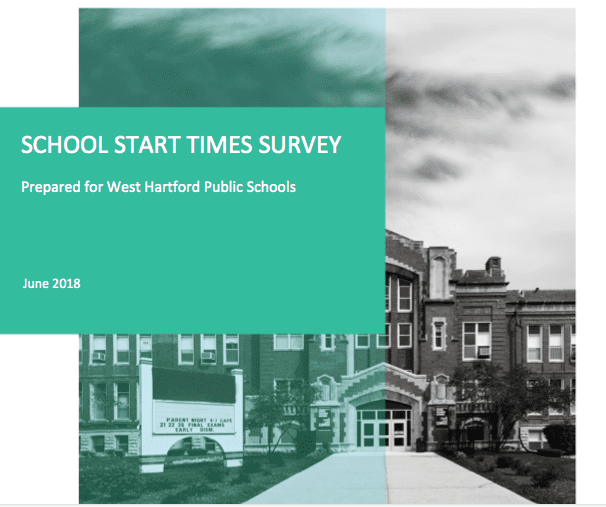 The Board of Education received the Rethinking School Start Time Committee’s final report of the academic year, the results of a stakeholder survey, and has now asked for details about the impact of several start time options.

By Ryley McGinnis and Ronni Newton

The Rethinking School Start Times Committee delivered its final report of the year Tuesday night, outlining the results of a recent stakeholder survey, and agreed that more study is needed before any decision to move forward is made.

After a lengthy discussion, the Board requested that Superintendent Tom Moore and the Rethinking School Start Times Committee, chaired by Director of Secondary Education Anne McKernan, provide a report on the feasibility, cost, and projected impact of several different options. The research will be done over the summer, and reported to the Board in early fall.

The other options the Board has asked the Committee to research are delaying the start time for high schools to 9 a.m. on Wednesday’s only (proposed by Deb Polun), and Rob Levine’s proposal to delay the start times for high schools by one hour and for elementary schools for 30 minutes while leaving middle schools unchanged. The fourth option would be to keep school hours unchanged.

Tuesday’s Committee report, which preceded the Board’s instructions to the Committee, addressed the results of a survey that was sent to all teachers, staff, and West Hartford Public Schools parents, as well as middle and high school students.

Previous reports by the Committee have addressed transportation issues, athletics, and the science of adolescent sleep habits, among other topics.

The Board has been considering an adjustment of school start times throughout the past year. The 22-person Rethinking School Start Times Committee, which was also broken down into subcommittees, has been meeting since mid-September 2017.

The 27-page survey, which was sent to more than 16,000 people, looked at respondent’s preferences on start times, the effects they think changes will have, personal lifestyles of respondents, such as when they go to bed and when they wake up, and the perceived impacts that a change in school start times will have on students health and outside of school activities.

A total of 7,218 people responded to the survey, with the largest respondents being secondary school students at a 69 percent response rate. Parents responded at a 29 percent rate and staff at 45 percent.

Among the first questions the survey asked was when do you go to bed and when do you wake up in the morning, and the survey showed that for high schoolers, 70 percent wake up before 6:30 a.m. while only 20 percent of them go to bed by 10:30 p.m. for school. The statistics varied for middle school, with students waking up later with 36 percent waking up between 6:30 and 7:00 a.m. and 33 percent waking up between 6 and 6:30 a.m.. They also go to bed earlier, with 58 percent going to bed before before 10:30 p.m.

The complete report on the survey results is included as a PDF below.

After McKernan delivered the findings of the committee, the board had a chance for comments, concerns, and questions.

A primary concern was about what would happen with sports and afterschool programs, especially if other schools do not also consider changing their start times as well, said Board member Mark Zydanowicz. “There is a time to lead and a time to follow … if you take a lead and no one follows then you are out there alone … good leaders know when to lead and when to follow if you are out there alone there are going to be problems.”

Zydanowicz also said that the Committee failed to look at one component he thinks is important – the impact of blue light from cellphones and other electronics interfering with sleep patterns. He also listed another concern about making changes to have middle schools start earlier. “If we’re going to hang our hat on science then we have to look at age groups and adolescents, and some middle schoolers are included in that,” said Zydanowicz.

Zydanowicz, and Levine, the Board’s two Republicans, both said that more time was needed to study the survey results before asking the Committee to do any further work. Levine said he wasn’t comfortable asking for options without reviewing the data.

However, Greenberg, Polun, and Dave Pauluk all clarified that the night was not going to end in a vote, but instead a recommendation on what the committee can research.

“What we’re hoping to do is examine more firm options so that we can figure out what would be the real consequences,” said Polun. “And I think the committee has been somewhat limited by the fact that we haven’t provided more specific parameters.”

“This is a difficult decision to make and not one that we can take lightly,” Vice Chair Carol Blanks said. She said that the Board really needs to look at it carefully and weigh both sides of the argument, adding that there should be a way to make it happen, even if it’s rough in the beginning.

Lorna Thomas-Farquharson said that the Committee has been very thorough, and appreciated receiving the information in stages. The science, she said, “speaks volumes – that does not undermine at all the impact of the changes,” but it still behooves the Board to consider the science, she said.

“We’re definitely listening – no one can say we didn’t listen,” Pauluk said based on the volume of input. He said that not everyone is going to like it, but whatever the Board decides will have been well thought out.

The third suggestion the board recommended for exploration was changing the high school start time by only one day of the week. Polun suggested that Wednesdays start at 9 a.m. while all other days of the week stay the same. “This is a backup option if we can’t get the whole loaf of bread,” said Polun. It would mean starting teacher professional development later in the day.

The committee will review these four options, give specific analyses on costs, effects on students, parents and staff, and include information gathered from West Hartford’s private schools as well on whether or not they will also switch their start times to accommodate changes in bus routes.

This was the Board of Education’s final meeting of the academic year. The next meeting will be held in early September.