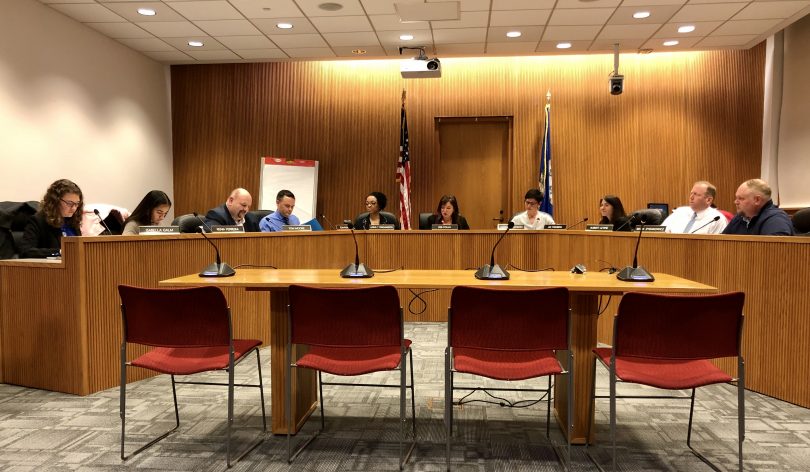 Consideration of a change in start times for West Hartford Public Schools ended last May, when then-Board of Education Chair Carol Blanks announced that the proposal was off the table and start times would remain as is, but the Board will now vote later this month on a resolution supporting a state-wide approach.

A first reading was held Tuesday night on a “Resolution Supporting a Statewide Change to School Start Times,” and the Board will vote at its next meeting, on Wednesday, Feb. 19, on whether or not to forward the resolution to the General Assembly.

If approved, the only impact of the resolution will be as official notification to West Hartford’s legislative delegation, and the General Assembly as a whole, that the West Hartford Board of Education supports a statewide move to require that students in grades 6-12 to begin academic classes no earlier than 8:30 a.m. so they can arrive at school “healthy, awake, alert, and ready to learn.”

Board Chair Deb Polun, who introduced the resolution Tuesday night, said that after the Board’s appointment of the “Rethinking School Start Times Committee” of administrators, teachers, parents, and students – which spent more than a year researching and studying the issue, delivering four reports to the Board during the 2017-18 academic year – and after the Board’s lengthy consideration of the matter that ended with it being removed from consideration last spring, this will serve as the next step.

“This is the next step in the process, and urges a statewide approach, urges the General Assembly to adopt legislation,” Polun said.

The resolution states that “a substantial body of research has demonstrated that delaying school start times for adolescents is an effective countermeasure to chronic sleep loss and has a wide range of benefits with regard to physical and mental health, safety, and academic achievement,” but acknowledges that a district-by-district change presents problems for inter-district activities and work schedules. It requests a statewide approach via legislation, to “ameliorate those issues and provide equity across districts, benefitting all students.”

Democrat Sean Passan, who was a member of the Rethinking School Start Times Committee prior to being elected to the Board last fall, said Tuesday that he is “happy to see the Board is revisiting this issue.”

Republican Rob Levine had the exact opposite reaction to the proposed resolution.

“I don’t know why we’re doing this,” Levine, who was on the Board when a change in start times was being considered, said Tuesday.

Levine said emails the Board received from the community during the consideration process were two-to-one against a change. Removing it from consideration seemed “prudent to me then,” he said, and still does, and “all this does is stir the pot.”

Levine said the reporting of any discussion about school start times will lead to a new onslaught of emails, and the timing is “ill-conceived” because the Board should really now be spending its time focusing on the budget.

Kenia Ferreira, the student representative from Conard High School, said the timing is not ill-conceived. “One of the issues you talk about is a quality education,” she said, and delayed start times will allow the students to have greater focus on their academics.

Mark Zydanowicz, the only other Republican on the Board, echoed Levine’s option. He said 75 percent of the students at Hall and Conard disagreed with the proposal to change school start times once they realized it would also mean getting out of school later, and feedback received from the community was that 64 percent didn’t support it.

“To bring this up, I don’t get it … I don’t know where the political avenue is,” Zydanowicz said. In addition, he added, the Board doesn’t “do resolutions.”

Even some proponents of later school start times did not find the option no. 2 proposal ideal because it required middle school students to begin earlier. Starting both high school and middle school later, however, would result in the need for an extra bus run, at a cost that research indicated could exceed $2 million.

During an emotional and contentious meeting – with a standing-room-only crowd filling the room – on Nov. 20, 2018, the Board initially decided to table the discussion rather than vote that night as planned. Blanks at the time cited a variety of reasons, including the emotionally-charged nature of the discussion and a need to focus on other priorities including a mandated increase in graduation requirements. In May 2019 the proposal was completely removed from the Board’s agenda.

Hundreds of emails on both sides of the issue had been submitted to Board members in advance of the scheduled vote, along with a petition signed by more than 150 in opposition to what was termed option no. 2.

In addition, more than 1,000 pages of email correspondence between then-Board of Education members regarding the start time issue were requested and obtained by We-Ha.com under the Freedom of Information Act, amid concern that the process of considering a change in start times was not being conducted in a fair or ethical manner.

Prior to the Board’s identification of specific start times to consider, there was a survey distributed to 16,000 stakeholders. The results of that survey can be found here.

Polun said Tuesday that the resolution was not being made for political purposes. “It’s just this issue was left hanging and thinking ahead to what some of the complications were when this was considered,” she said, making a change district-by-district was overly complicated.

While a resolution from the Board of Education is rare, Polun said, the General Assembly’s session begins on Wednesday and she said it was important to let the West Hartford delegation know that a statewide measure is supported by the Board.

The motion to accept the first reading of the resolution was made and seconded, and a second reading and vote will take place Feb. 19.