Target formally announced plans to open its first small-format store in the state in West Hartford. 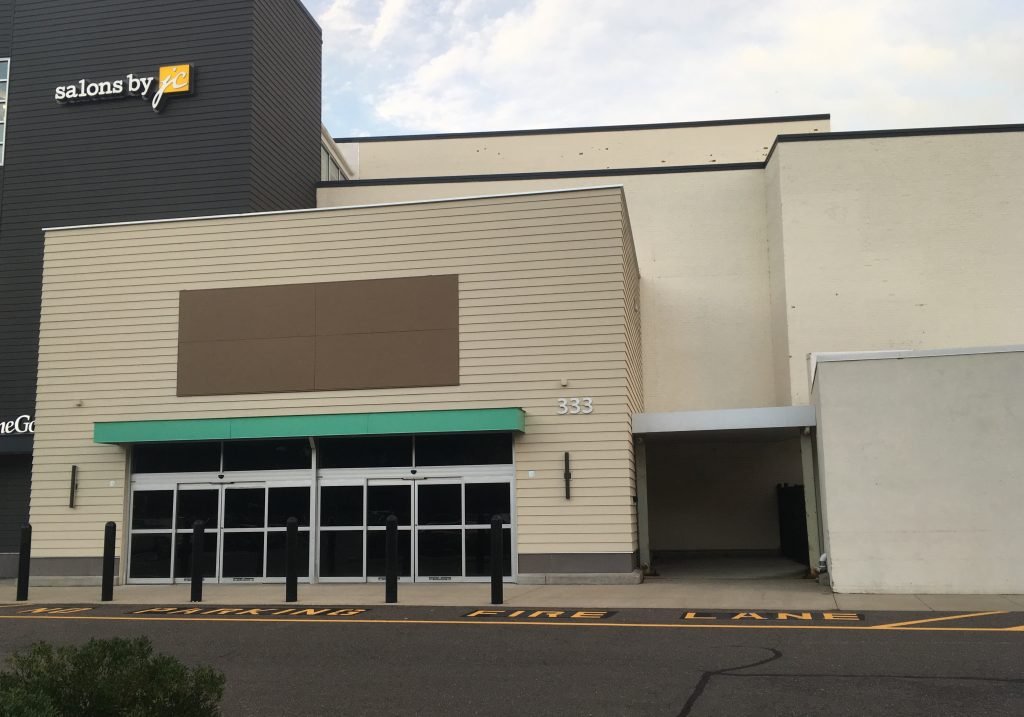 Target applied for a permit for signage at 333 North Main St. in Bishops Corner in September, and in December signed the lease. Photo credit: Ronni Newton (we-ha.com file photo)

Target has made it official – and the company announced Tuesday that it has signed a lease to open a small-format store in the 59,000 square foot former Walmart space in the Edens Bishops Corner West shopping center in West Hartford.

There was plenty of excitement in September, when news broke that Target had approached the town to obtain permission for its signage and minor architectural changes to 333 North Main St. The amendments to the Special Development District for the property were minor enough to be approved by Town Planner Todd Dumais through administrative authority.

Plans could not be officially announced until the lease was signed.

“Target is exactly what Bishops Corner needs: a strong, dependable brand that serves all ages,” said West Hartford Mayor Shari Cantor. “Target’s addition to the plaza is a source of much excitement. Target will do well because Bishops Corner is a strong commercial district and a big draw for the region.”

Target’s moving into the formerly vacant space is great news for Edens and the town, Cantor said. The space has been vacant since Walmart Neighborhood Market closed in January 2016.

“From my perspective it’s very exciting news,” Town Manager Matt Hart said. Bishops Corner is a key commercial area for the town, and Edens is the largest property owner in the area.

“It’s groundbreaking news that this is the first-small format store in the state,” Hart added. “I appreciate Target’s investment in the community and Edens’ work to attract a tenant of that caliber.”

Target has 20 stores in Connecticut already, and six others in the Hartford area, but the West Hartford store will be Target’s first small-format store in the state, the company said in its announcement Tuesday.

Small-format stores are being opened in “urban areas, dense suburban neighborhoods, and near college campuses – places where a full-size Target store may not fit,” the company said.

West Hartford Economic Development Specialist Kristen Gorski said that she expects Target will begin applying for permits in early 2019, with plans to open sometime in mid- to late-2019.

“As we continue to reach more guests across the country, we’re excited to open our first small-format store in Connecticut to provide a convenient, one-stop shopping experience for families and residents of West Hartford and surrounding towns,” Target Senior Vice President of Properties Mark Schindele said in a statement.

The store, although smaller than most Target stores, will offer the same categories as in a full-size store, the company said. The assortment of foods and beverages, apparel, accessories, health and beauty items, home essentials, seasonal merchandise, electronics, and toys will be specifically curated for the customer base.

Pickup for online orders – within an hour – will also be available.

“I’m  really looking forward to seeing how that works,” Hart said of the online order feature, which is similar to the Amazon model.

Target’s announcement indicates plans to hire about 75 team members for the West Hartford store. “Target also offers various education benefits, such as tuition and GED reimbursement, to support team members’ continuous learning. This investment in the team will allow Target to continue to recruit and retain strong team members and provide an elevated experience for its guests,” the announcement states.

“We would like to thank the community of West Hartford for their ongoing support of Bishops Corner and for approving the first small-format Target store in Connecticut,” Elizabeth Furnelli, managing director – leasing, for Edens said in a statement. “Edens is thrilled to expand our partnership with Target at Bishops Corner as we strive to meet the needs of the community and continue to expand the shopping and dining experience.”

The space at 333 North Main St. was formerly an Adams Supermarket, but had been empty for many years before the Walmart Neighborhood Market opened.