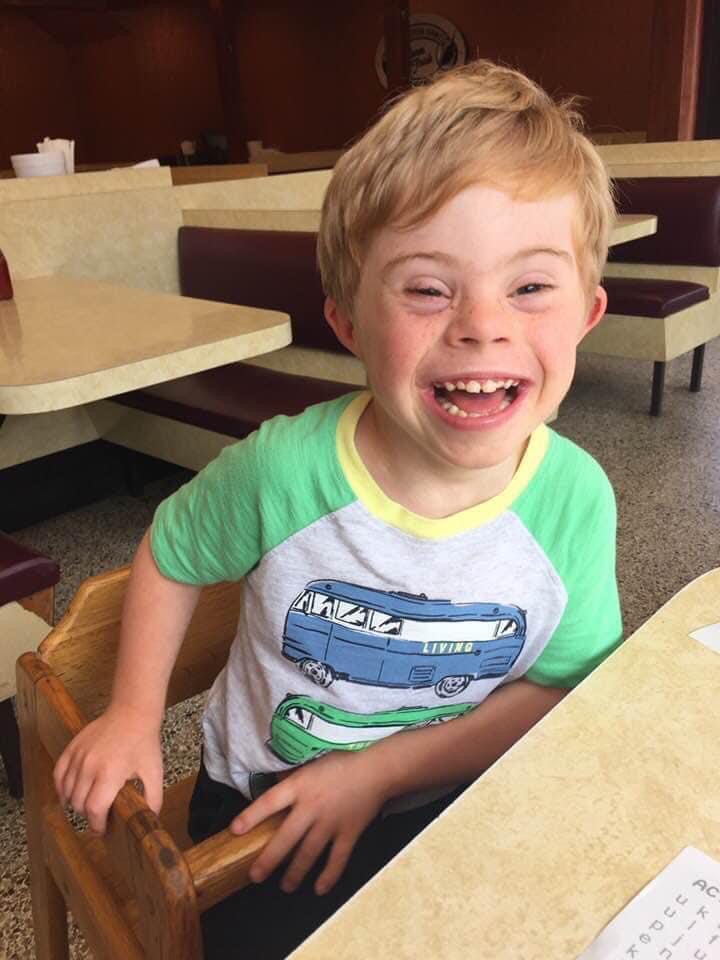 Finn Daly, 8, is the "life of the party," according to his mother, Brooke. Courtesy photo

A West Hartford boy’s love of his shoes is spreading awareness about those with special needs. 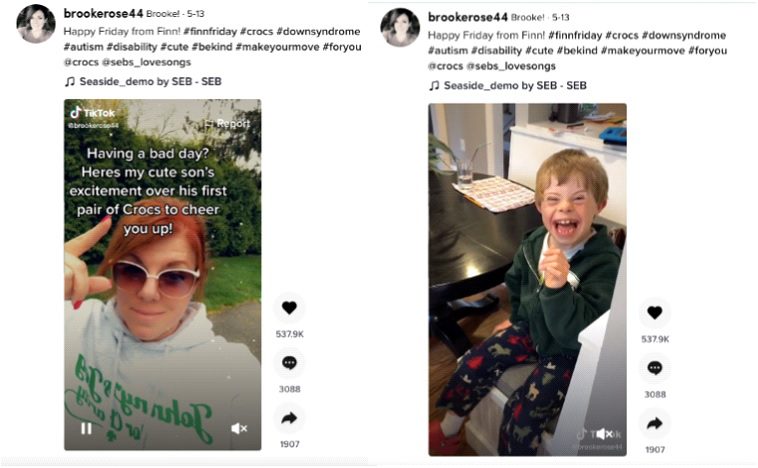 Finn Daly’s giant smile and his reaction to his new pair of Crocs on a viral video his mother, Brooke Daly (left) made for TikTok has had more than 4 million views. Brooke hopes it continues to spread awareness about children with special needs. Courtesy photo

It was amazing that Brooke Daly caught the perfect video recording of her son Finn trying his new Crocs shoes on for the first time. Because that 10-second clip took on a life of its own via Brooke’s TikTok account, racking up a whopping 4.2 million views in just a few days.

For the Daly family, which also includes husband Kevin and daughter Rosie, 11, it’s another in a series of spontaneous adventures that have propelled them all into the public eye.

For Brooke, it’s a great way to share Finn’s beautiful personality and raise awareness about the fact that he has autism and Down syndrome.

When Brooke was pregnant with Finn, “it was definitely overwhelming and scary when we found out that he had Down syndrome,” she said. “Kevin and I quickly found people in the community who could help us and we got involved with the Down Syndrome Association of Connecticut. I’m on the board now. It’s a wonderful organization and we have met other families like ours. And we have all calmed each other’s fears. These kids are more capable than anyone thinks. And I’m grateful Finn was the second child and not the first. When you’re a new mom, it’s scary enough. It’s so important to find community and support, find a system that works for you.”

Finn is now 8 and Brooke said he is “the life of the party. He’s a very social kid. He gets very excited when he can do something himself.” 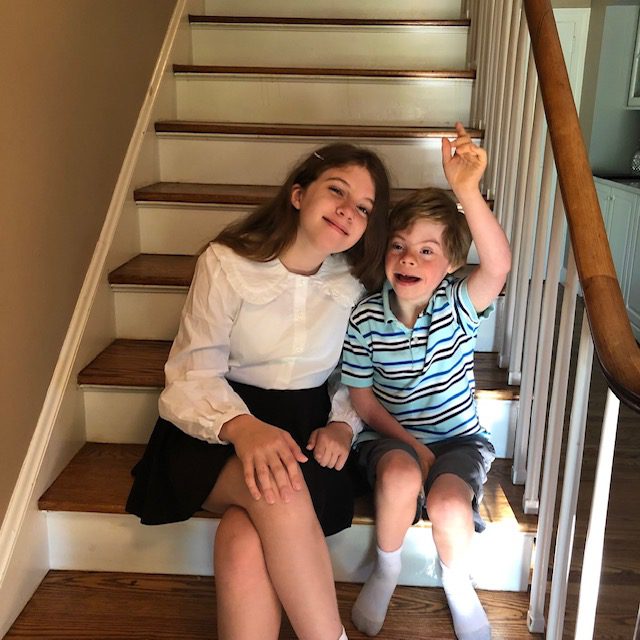 “I joined TikTok as a joke because I did the funny plank challenge at the gym,” Brooke said. The TikTok plank challenge employs dance, exercise, and music moves for subscribers to practice and then record for their followers.

“I got more and more followers,” she added. “For moms, this is another avenue for special needs awareness.

That day, she posted the video and checked in later that day. “It was in the thousands,” she said. “I thought, ‘what is going on?’”

The next morning, the numbers of views was at one million.

In the video, Brooke asks, “Having a bad day? Here’s my cute son’s excitement over his first pair of Crocs to cheer you up.” The camera then cuts to sister Rosie showing Finn how to put on his shoes. After he’s had them slipped on, he looks up at the camera with a smile of sheer delight.

“It was amazing that I caught that clip of him putting on his shoes,” Brooke said. “He was thrilled. He shows his joy.”

The thousands of comments corroborate that.

“This really did cheer me up. I wasn’t even sad!!! I love how happy he looks.”

“Omg that gorgeous face. He looks thrilled. Bless him.”

Two years ago, CBS national news reporter Steve Hartman caught wind of a story about Finn that touched a nerve and reported on it. 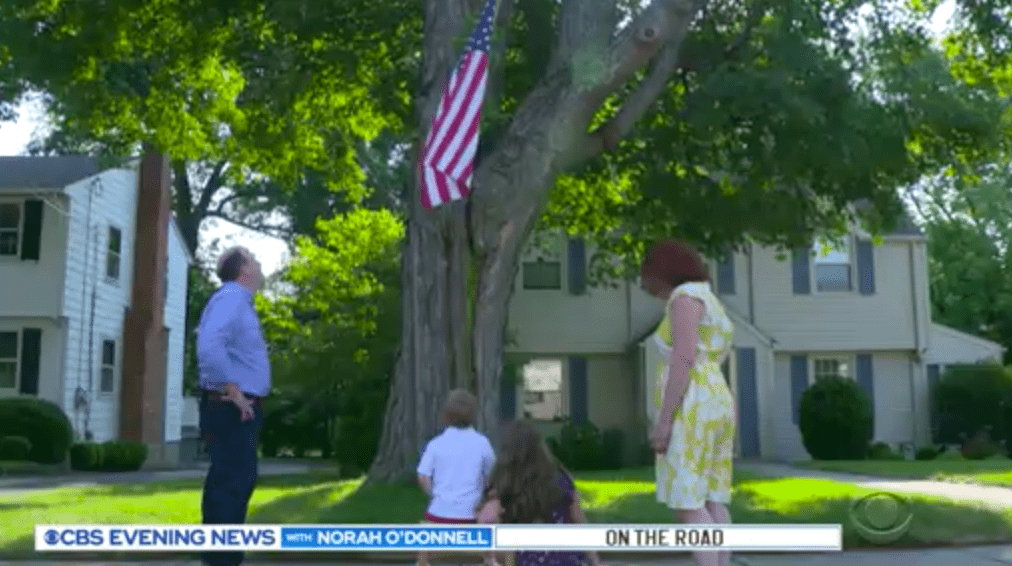 Two years ago, CBS national news reporter Steve Hartman caught wind of a story about Finn Daly and reported on the story for the CBS “Sunday Morning Show” and evening news. Courtesy of Daly family

Finn loves the movement of American flags blowing in the breeze and none more than neighbor Todd Disque’s flag. Disque was so touched by Finn’s devotion he went into his garage and made a bench just for Finn, so that he could sit and watch it.

The story, which aired two years ago, was on the CBS Sunday Morning Show as well as the CBS Evening News.
In his piece, Hartman said, “Norman Rockwell couldn’t have imagined a more uniquely American moment, a vision of strength and compassion in one glorious frame, all created by a master of kindness with nothing more on his palette than a circular saw and an eye for empathy.”

Recently, a producer from another network reached out to Brooke to do the story “but no one could do it better than Steve Hartman did two years ago.” 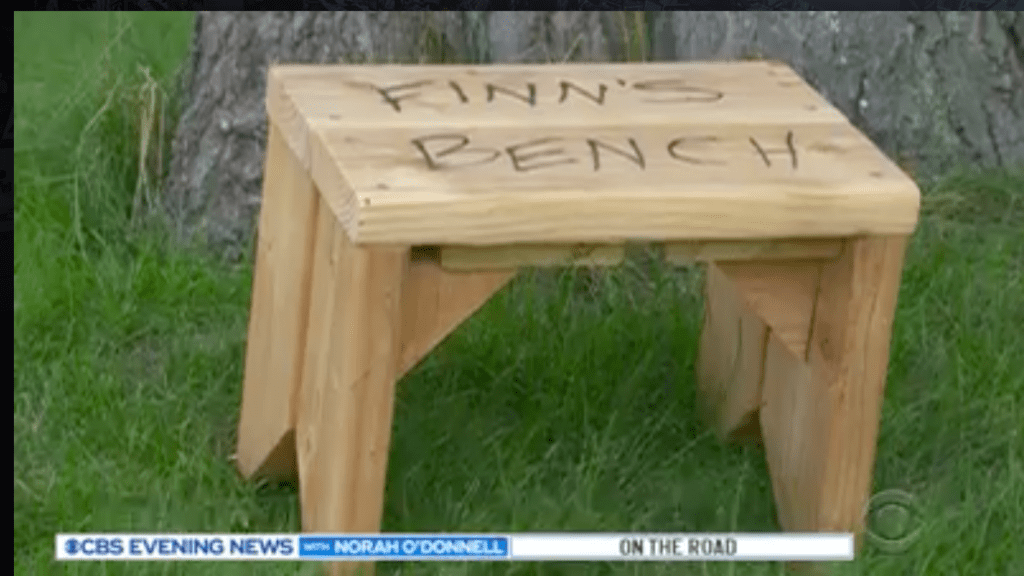 For Brooke, shining a light on Finn means she is doing what she can to raise the awareness of children with special needs.

In addition to being on the board of the Down Syndrome Association, she, with friends and family, has run Team Fighters for Finn in the Annual Down Syndrome Charity Walk since Finn was a baby. This year, it’s on Oct. 2 at New Britain Bees Stadium. She would love to have Crocs sponsor the walk.

“There’s a ton of Crocs fans. I’m trying to get the attention of someone there. When we first started, the goal was to raise $1,000. Last year was our biggest year. It was a virtual walk and we raised $6,000! But we’re back to walking for real this year.

“People are welcome to join our team,” she said. “We love to have people walk with us and we’re grateful for how the community has embraced Finn.

Team “Fighters for Finn” appreciates any support from the community’s support! All money raised will go to the non-profit, Down Syndrome Association of Connecticut. Anyone who wants to join the team, be a sponsor or to make a contribution, can visit the team website.

Daly posts positive “#FinnFriday” messages on Twitter and other social media sites every Friday, tagging many local media personalities who gladly retweet them. As part of the efforts to support the Down Syndrome Association of America, she’s also offering #FinnFriday shirts to benefit the organization. The shirts are available through Aug. 29, and can be ordered through this link. At press time, 94 shirts have been sold, with the goal of selling 100.

A version of this story appeared in the August 2021 issue of West Hartford LIFE.