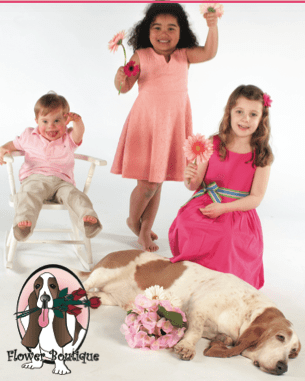 Two-year-old Finn Daly of West Hartford, who has Down syndrome, is featured in a local advertisement for Mother’s Day. 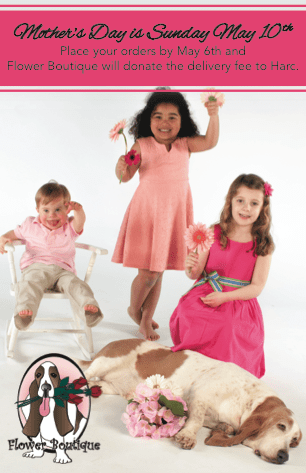 West Hartford resident Brooke Daly was working as a manager in customer service at The Hartford when she learned that her unborn child had Down syndrome.

“It was very upsetting, very scary,” she said.

When Finn, now 2, was born Daly left The Hartford to care for him full-time, in part because she thought he would need surgery for a congenital heart defect, quite common for children with Down syndrome. “My husband and I had very little to no experience with kids with Down syndrome,” Daly said, who added that thankfully Finn did not require the surgery.

She has learned plenty over the past two years, has gotten involved with the Connecticut Down Syndrome Congress, and is working tirelessly to promote awareness, acceptance, and inclusion for children with Down syndrome.

“This is now my new career. It’s so important for people to understand that kids with disabilities are just like every other kid,” Daly said.

Daly said that she stumbled onto the social media campaign #changingthefaceofbeauty on Facebook and Twitter. “Changing the Face of Beauty” was founded by Katie Driscoll – parent of a young girl with Down syndrome – in an effort to show the world how beautiful all people and promote inclusion in advertising. 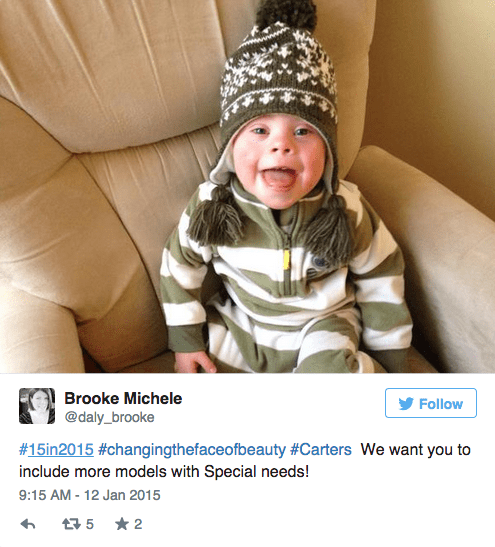 Brooke Daly tweeted this image of her 2-year-old son, Finn, and it was featured in an article on the website ‘The Mighty.’

“I thought that was so great. Other than Target, you don’t see a lot of children with special needs represented in advertising,” said Daly.

In January, Daly tweeted a photo of Finn with the hashtags #changingthefaceofbeauty and #15in2015 (a related campaign), and didn’t think much more about it.

“It was so random,” said Daly, who didn’t realize that anything had happened with the photo until a friend who lives in Ireland contacted her because he had seen Finn’s photo on “The Mighty” in a story about Driscoll and English’s campaign. That story garnered more than 96,000 Facebook Likes.

“Modeling was never my intention,” Daly said, although she thinks Finn is adorable and she wouldn’t be opposed to it.

And Finn has already gotten a modeling job – posing in a Mother’s Day ad for a local flower shop.

“Brooke and I go way back. I was with her when she met her husband,” said Becky Daleb, owner of Flower Boutique on Murphy Road in Hartford. She saw Finn’s photo on Facebook with the #changingthefaceofbeauty hashtag, and thought it would be great to bring the campaign home. 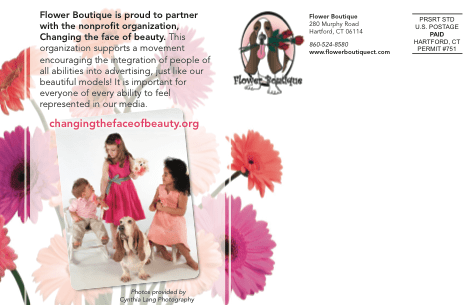 “I came up with the idea of starting a local grassroots movement,” Daleb said. She and Daly agreed that Mother’s Day made the most sense.

Finn posed along with his 5-year-old sister Rosie, Daleb’s goddaughter Maisyn Robinson, and Daleb’s basset hound, Abner. “Finn was as cooperative as any rambunctious 2-year-old would be,” joked Daleb, who said it was Abner who decided when the photo shoot needed to end.

Several of the photos turned out great, Daleb said, and are being used as part of a Mother’s Day promotion. She is donating the delivery fees to both Harc and the CT Down Syndrome Congress. Daleb is hopeful that the campaign will be successful, and looks forward to doing more.

Daly is working to promote awareness through other means as well. This year she was accepted into a 20-week “Parent Leadership Training Initiative” program that meets at Conard High School every Thursday night. Daly said that the program, which helps “train, inspire, and empower parents,” has really helped her zero-in on what to do and how put a plan in place.

One component of that plan is celebrating “World Down Syndrome Day,” which is March 21. Daly’s daughter, Rosie, goes to Duffy Elementary School, and she thought it would be fun to celebrate with “crazy sock day” at all of the town’s elementary schools.

She met with administrators and started with four this year – Duffy, Whiting Lane (where Finn will go next year after he finishes “Birth To Three”), Charter Oak, and Aiken – and hopes to expand to the rest of the elementary and maybe even the other schools next year.

“My overall goal is to promote awareness and more acceptance of people with Down syndrome. They’re just like your kids, like your babies,” said Daly. “I want to promote that in all different aspects of life.”