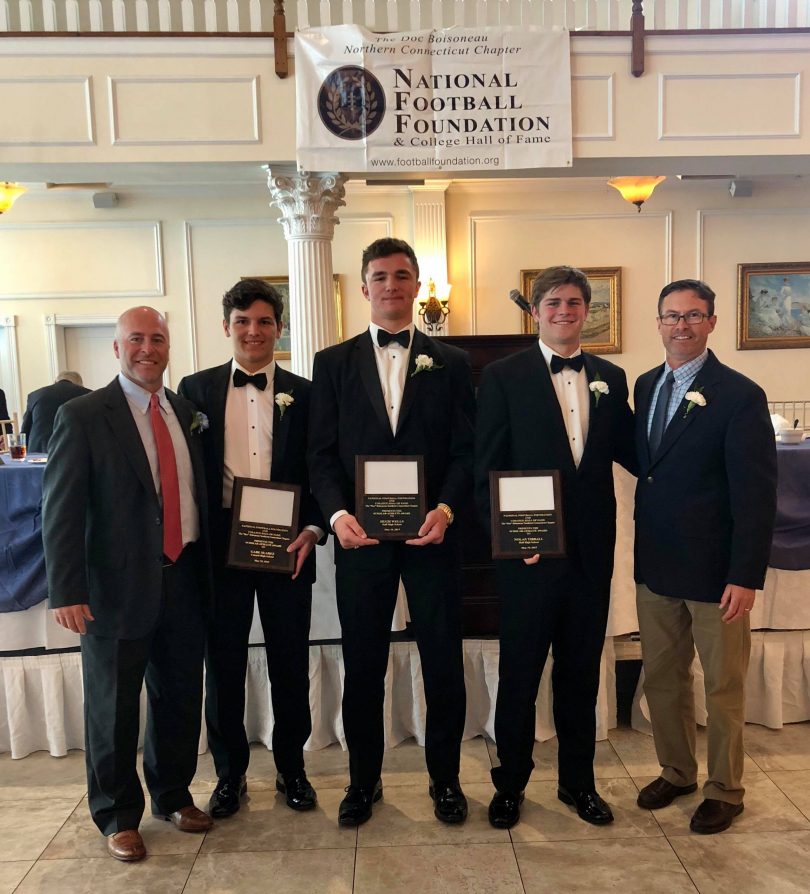 Hugh Wells and Nolan Tibball from Hall, and Gabe Suarez from Conard, earned the honor which is based on football performance, scholarship, and leadership.

Three seniors from West Hartford, members of the Conard High School and Hall High School football teams, were three of the 13 scholar-athletes honored recently at the National Football Foundation and College Hall of Fame Banquet at the Aqua Turf in Plantsville.

All three were surprised at their schools earlier this year when they were informed by a representative of the National Football Foundation Northern Chapter that they had received the prestigious honor based on their work on the field, in the classroom, and in the community.

Honorees have their names listed at the College Football Hall of Fame in Atlanta, GA.

Head coach Frank Robinson had many words of praise for both of the Hall recipients.

Nolan Tibball, a team captain who played multiple positions on offense (running back, slot, wildcat) as well as defense (stack and outside linebacker and safety), is incredibly competitive, Robinson said. “He strives to make the most of each and every play. He will never quit, and he is determined to win any and every battle on the field,” he said.

“Nolan’s football IQ is remarkable. He understands how an opponent is trying to scheme and uses that to his advantage. Nolan played multiple positions due to his knowledge and understanding of the game,” Robinson said.

Tibball was the leading tackler for Hall last season, and had nine tackles for loss. As a junior, he earned the team’s “Defensive Player of the Year.”

Statistics for Tibball provided by Robinson include: 76 tackles on defense; 479 receiving yards (12.3 yards/catch), seven touchdowns, and 92 return yards (18.4 yards/return). He earned CCC All-Academic team honors and was named to the CCC All-Conference team.

Tibball, who will play football at Middlebury College next year, clearly fulfills the scholar portion of the honor as well. According to Robinson, he is a member of the National Honor Society and has a cumulative GPA of 4.23. In addition to football, Tibball played lacrosse for the Warriors.

Hugh Wells, who plays both offense (tackle) and defense (defensive end and middle linebacker), received Hall’s “Defensive Player of the Year” this year, Robinson said. He had 65 tackles, 31 of them solo, and nine tackles for loss.

“Most teams ran the ball away from Hugh,” Robinson said.

“He does everything the right way, with great integrity and great effort,” Robinson said of Wells. “He deems everyone as an important human being and critical to the team’s success. Hugh leads in a unique way, nurturing those who need it and demanding excellence from everyone. He leads by example and provides a culture of positive attitude.”

Wells, who has a 3.61 GPA, will play football next year at Massachusetts Maritime Academy.

“Gabe is everything you want in a student-athlete,” Conard football coach Matt Cersosimo said of Gabe Suarez.

“He is fully committed to his academics, athletic teams, and is a leader in everything that he does in and out of school,” said Cersosimo. “On the game field field, in the weight room or practice field, he always competes at his best. He is a great young man and we proud that he is our representative for the National Football Foundation Northern Chapter Scholar-Athlete.”

Suarez, who played free safety, was a captain of Conard’s football team. He was also a midfielder and captain of the lacrosse team the spring.

Suarez will attend the University of Vermont in the fall, but will not play football.

It is uncommon have three recipients of the scholar-athlete award from the same town. There was one West Hartford Public Schools recipient last year – Jack Moore of Conard High School – and Colin Fitzsimonds of Hall High School was recognized as a National Football Foundation Scholar-Athlete in 2017. Spencer Merkel of West Hartford, who attended Northwest Catholic, and his teammate Cooper Lorenz of Suffield, were named National Football Foundation Scholar-Athletes in 2018.