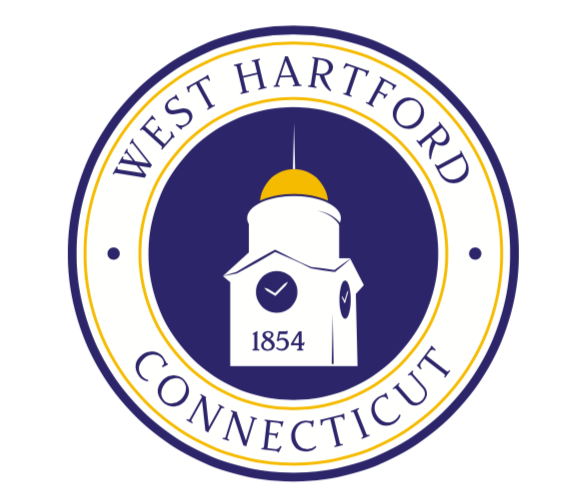 The Town of West Hartford unveiled its new logo Friday afternoon, following a months-long project that included input from the community.

The Town of West Hartford first announced plans to update its logo a year ago and began the process in earnest last fall, and after revealing two finalist choices in February and significant tweaking and refinement of the design, the chosen logo and seal were unveiled Friday afternoon.

In an announcement revealing the logo issued by Public Relations Specialist Renée McCue, the blue and gold clocktower design was described as “simple, memorable, timeless, versatile, and appropriate.”

Town officials wanted to unveil the logo in time for it to be on display on posters at Celebrate! West Hartford, which will be held the weekend of June 1 and 2 on the grounds of Town Hall.

“We took all of the comments and really looked at what we had and tried to refine it,” McCue said Friday afternoon. There were hundreds of comments offered when the final choices were revealed for public input in February, but the overwhelming choice between the two logos – one in blue and gold that depicted a clocktower and the other multi-color blocks and fonts that represented the town’s diversity – was the clocktower, McCue said.

These two designs were revealed as finalists in February, and the clocktower design was refined into the design that was unveiled May 31. (we-ha.com file photo)

McCue said that Town Planner Todd Dumais looked back at archival information, and actually found drawings of the cupola – the clocktower structure that sites atop the former Town Hall building at 44 South Main St. (now Fleming’s and Balos) – and incorporated elements of those drawings as the design was finalized.

Town Manager Matt Hart said that the logo project was prompted by several factors, including the inconsistency of logos across departments. The “official” logo used by the town was more than 30 years old.

“Some departments had the full image, while others cut it in half. Some used a completely different logo altogether,” Hart said.

A goal of the project was to reflect the town’s vibrancy, while celebrating its history.

“We received hundreds of comments from West Hartford residents in the first two phases of this project,” Town Council member Liam Sweeney said in a statement. “We were able to take all of that information and turn it into a logo that is a product of community collaboration.”

West Hartford-based Ryan Marketing, which was chosen to design the new logo, incorporated those comments from the community as they refined the clocktower image into the final design.

Lindsay Ryan Jensen, managing partner of Ryan Marketing and a West Hartford resident, said it was an honor to be involved in the first re-branding effort the town has undertaken in more than three decades.

“It was an interesting, creative process to talk to and hear from fellow members of the community to learn how they view our town and how they want it represented,” Jensen said in a statement. “This final logo is the result of much research, feedback and input – and we believe it is a strong visual that celebrates the legacy and possibilities of our beautiful town.”

Mayor Shari Cantor commended the committee and Ryan Marketing for their work on this project. “West Hartford means so many different things to the people who live and work here. Capturing that essence in an image was no small challenge,” she said in a statement.

Dumais said that the clocktower was a feature in many versions of past logos, and provides an element of continuity.

The clocktower itself, and the 44 South Main St. building on which it sits, are important elements of the town’s history and legacy, as well as its community development philosophy.

The former Town Hall building was constructed as a federal Public Works Administration (PWA) sponsored project during the Great Depression. A grant in the sum of $134,782 was provided by the PWA, and the building, which cost $321,176, was constructed between December 1935 and February 1937.

The clocktower and its gold dome were carefully restored when 44 South Main St., which had become the administrative offices for West Hartford Public Schools, was incorporated into Blue Back Square.

“Although clock towers are today mostly admired for their aesthetics, they once served an important purpose. Before the middle of the twentieth century, most people did not have watches, and prior to the 18th century, even home clocks were rare. To this end, clocks were placed in town centers, often in the tallest structures, so the townspeople could read the time whenever they wanted,” the logo announcement stated.

Hart said he believes that the chosen logo accomplishes what he believes are key requirements: “The best logos should be a recognizable brand upon first sight, be able to explain itself in the size of a postage stamp, and be easily adaptable to various formats.”

The logo will be put into use gradually, McCue said. “We will start to phase it in as we need to order new items,” she said. As an example, the t-shirts worn by seasonal Public Works employees, which are about to be ordered, will use the. new design.

“We do not plan to rush out and replace everything that we have in stock now,” Hart said, including printed material and officials documents, but rather will be used as inventory is depleted.

The town is not just choosing a new logo, but rather will continue its multi-level rebranding with a new website design and a promotional brochure for new residents.

The new logo will be on display on a poster at the main information tent during Celebrate! West Hartford, Saturday, June 1 from 10 a.m.-6 p.m., and Sunday, June 2, from noon-6 p.m.