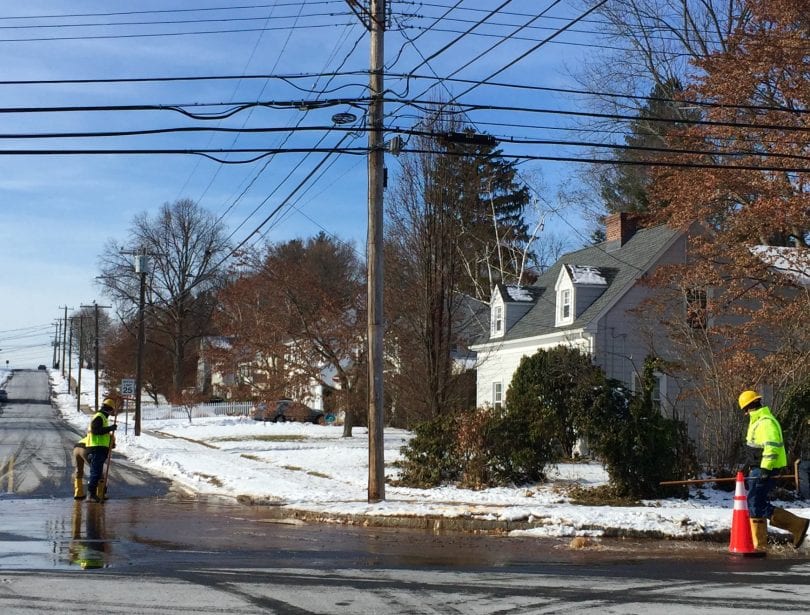 Water gushing from the ground at the intersection of Webster Hill Boulevard and Ledgewood Road. Photo credit: Ronni Newton

[Updated, 1:45 p.m.] Webster Hill Elementary School had to close at noon on Tuesday so that MDC crews could address a water main break in the area, and water is now shut off to 31 residences as well.

In an email Tuesday afternoon, Metropolitan District Commission (MDC) spokesperson Kerry Martin updated the situation related to the water main break on Webster Hill Boulevard and said that water has been shut down to 31 properties as well as Webster Hill Elementary School.

The water was shut off at 1 p.m. and it is estimated that crews will take from 6-8 hours to complete repairs. Martin estimated that water should be back on between 7-9 p.m. Tuesday.

A water main break on Webster Hill Boulevard has worsened since it was first discovered Tuesday morning, forcing officials from West Hartford Public Schools to close an area elementary school. 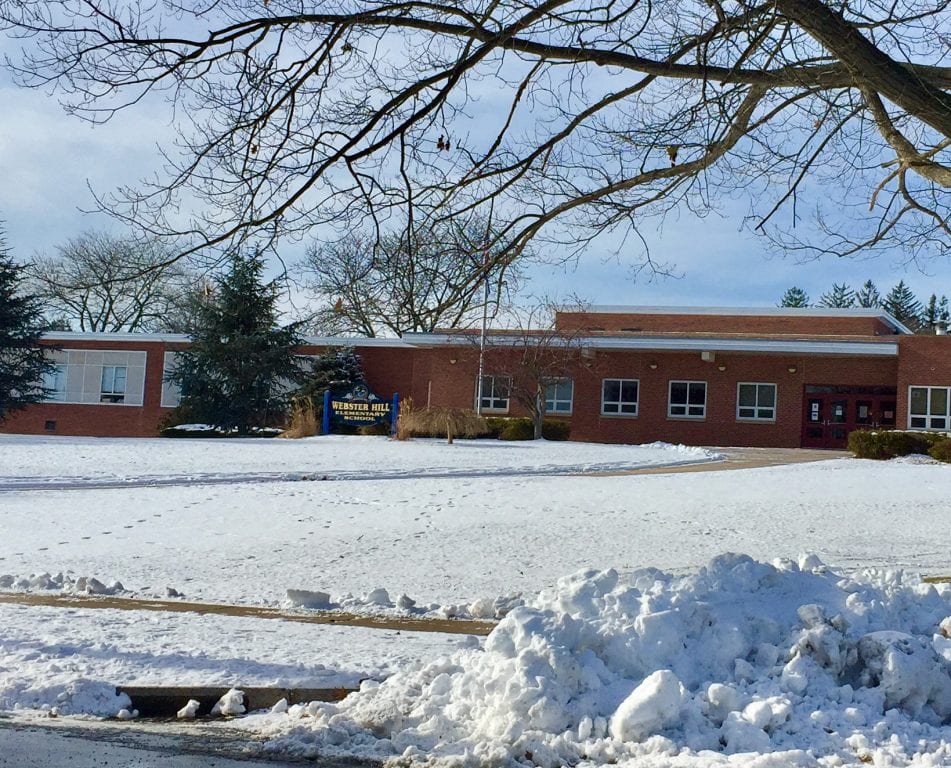 “MDC will be turning off the water to the building, so we will be dismissing Webster Hill students early today at noon. Parents are being notified and buses will run their normal routes home at [noon],” Morrow said in an email.

Metropolitan District Commission (MDC) officials had earlier confirmed an 8-inch water main leak on Webster Hill Boulevard near the school, but were hoping to wait until after school dismissed and begin the repair work at 5 p.m.

MDC spokesperson Kerry Marin sent out another email later Tuesday morning, stating that the “leak has progressed to the point where crews will be required to shut down the water main and begin the repair this afternoon, before the previously scheduled repair start time of 5 p.m.”

Martin said that crews initially thought they could just throttle back service while waiting to begin the repairs, but then one of the gates – a valve that controls the flow of water – was compromised in the process.

“Then we had to shut it all down to do repair,” Martin said. “Initially we hoped the leak would stay small, but this is not all that unusual.”

Crews were on the scene right in front of the Webster Hill Elementary School driveway, as well as at the corner of Webster Hill Boulevard and Ledgewood Road where water could be seen bubbling up from the roadway.

Martin said that until the water is shut down, the MDC cannot determine how many residents, if any, might be without water.

Water main breaks are common in extreme weather such as the severe cold that has gripped the area for the past week.

“The ground freezing, heaving, and moving can cause pipes to break. The age of the pipe, pipe materials, and subsurface conditions can all also contribute to a break, as breaks can, and do, occur in temperate conditions as well; however, extreme cold typically causes an uptick in the occurrence and severity of breaks,” Martin said in an email.

This is the third water main break in West Hartford in the past few days. On New Year’s Eve, a water main broke at the intersection of Tunxis Road and Ridgewood Road, impacting eight homes, and on New Year’s Day 12 residences were without water for most of the day when a main broke on Westmont.

Check back with We-Ha.com for updates on the Webster Hill Boulevard water main break.