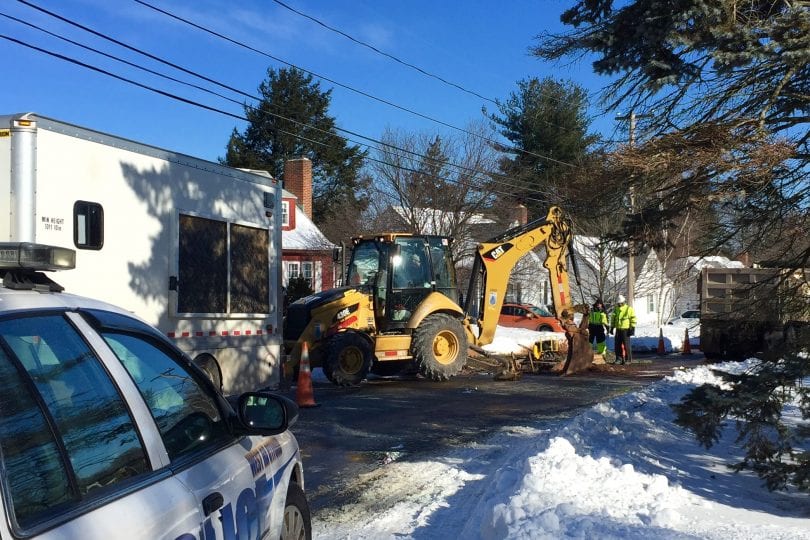 MDC crews on the scene of a water main break on Cassilis Road in West Hartford on Saturday morning. Photo credit: Ronni Newton

[Updated] The extreme weather has continued to take a toll on water mains in West Hartford, with two more occurring on Saturday.

Metropolitan District Commission spokesperson Kerry Martin advised that all service in West Hartford was restored as of 4:30 p.m.

The bitter cold temperatures that have gripped the region for the past week are continuing to be a problem for the Metropolitan District Commission (MDC), with water main breaks becoming a daily occurrence.

Since New Year’s Eve, there have been six water main breaks in West Hartford.

At approximately 6:30 a.m. Saturday, with an air temperature hovering around 0 degrees and a windchill well below that, MDC spokesperson Kerry Martin said that crews were at work on an 8-inch water main break reported on Cassilis Road.

The main, which was installed in 1948, resulted in a shutdown of service to 19 homes on Cassilis, from no. 36 up to Webster Hill Boulevard.

Icy water ran down the hill of Cassilis to Overbrook Road, and in addition to repairing the main, MDC crews worked to prevent a thick layer of ice from forming on the roadway.

All service on Cassilis was restored by 12:23 p.m., Martin said in an email.

A second water main break in West Hartford was discovered on Burnham Road later in the morning.

Martin said that at approximately 9:30 a.m., service was shut down to 13 homes, from 42 Burnham Rd. to Red Top Drive, for repairs to an 8-inch main that had been installed in 1962.

Repairs to the Burnham Road main were expected to take from 6-8 hours, and Martin said that water service should be restored between 3:30 and 5:30 p.m. Saturday.

The heaving of the ground due to the extreme cold is the cause of the problem, Martin said previously. Mains that are more than 100 years old, as well as those installed within the past 50 years, are impacted.