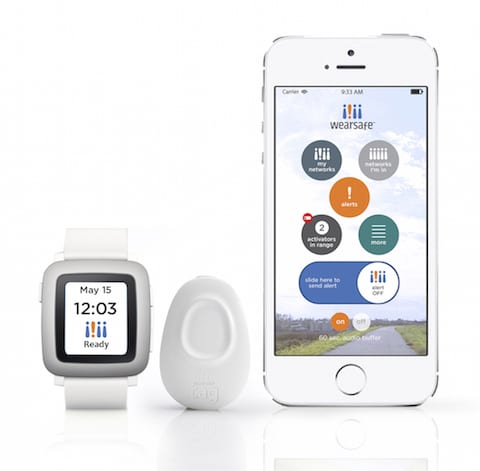 Wearsafe Labs has reached its Kickstarter goal and will begin shipping its first product, the Wearsafe Tag, in several weeks. Submitted photo

The Connecticut wearable tech startup, co-founded by West Hartford resident David Benoit, reached its $75,000 Kickstarter goal in less than four Weeks on mission to save #10millionlives.

Wearsafe Labs has reached its Kickstarter goal and will begin shipping its first product, the Wearsafe Tag, in several weeks. Submitted photo

“We cannot thank the Wearsafe community enough for their overwhelming support,” says Phill Giancarlo, co-founder of Wearsafe Labs. “We are so grateful to and humbled by the backers who believe in us and our mission to save 10 million lives over the next ten years.”

“We’ve achieved our goal of $75,000, and that is incredible, but we have an even greater purpose to realize” adds David Benoit, co-founder of Wearsafe Labs. “For us, saving lives goes beyond those which would have been lost, to also include those which might otherwise be irreparably altered by a bad experience. With this new technology we have the ability to empower, connect and protect the people we love and help to keep each other safe.”

Wearsafe’s Kickstarter campaign is the launching point for the company’s mission to positively impact 10 million lives in the next 10 years. “As humans we inherently care about our safety and the safety of those closest to us,” says Kim Glooch, chief creative officer for Wearsafe Labs. “When you need it the most, your phone can be out of reach, hard to open, or you may not want to reveal you need help, so Wearsafe will call for you. The Wearsafe service and product will keep you safer wherever you are and more secure in whatever you’re doing.” Kickstarter rewards still available include free service for life.

Benoit and Giancarlo have spent nearly four years developing new wearable technology aimed at preventing the unthinkable from happening. Just weeks after the conclusion of the Kickstarter campaign, which ends Aug. 20, Wearsafe will begin shipping its first offering, the Wearsafe Tag. “The Wearsafe Tag will change how we connect and how we stay safe,” says Giancarlo.

Examples of messages generated through the Wearsafe Tag. Submitted photo

The Wearsafe Tag is a small, wearable Bluetooth low-energy device that pairs seamlessly with a smartphone to instantly connect a person with their network of family and friends. The device, which can clip onto almost anything, uses one discreet touch of a button with a range of up to 200 feet. When activated, a selected network instantly receives an alert through email, text and their Wearsafe app, a group chat is started and the network can see where someone is with the GPS information provided as well as hear audio from the location. Users can also receive tactile confirmation to let them know their alert has been received. If additional assistance is needed, contacts can dial 911 directly from the Wearsafe app and share critical information.

Former U.S. Secret Service Special Agent Rich Staropoli, who is Wearsafe’s security advisor as well as Chief Security Officer for Fortress in NYC, considers the Tag to be a game changer. “It’s a simple device, incredibly effective and works all the time. As a former Secret Service Agent, if I couldn’t be there with the President, I would want him to have a Wearsafe Tag in his pocket.”

Adaptable for your whole life from morning through night, the Wearsafe Tag is designed to fit into your varied lifestyle. This innovative product is ideal for everyone, students, athletes, travelers and parents with small children. Wear it a variety of ways or hide it completely, it’s your choice. One-touch connectivity keeps you safer wherever you are and more secure in whatever you’re doing.

About Wearsafe
As pioneers in creating personal safety products and communication services that leverage mobile technology, Wearsafe’s vision is to change the perception of safety and security products, from solely protecting locations and property, to protecting individuals, wherever they may be.