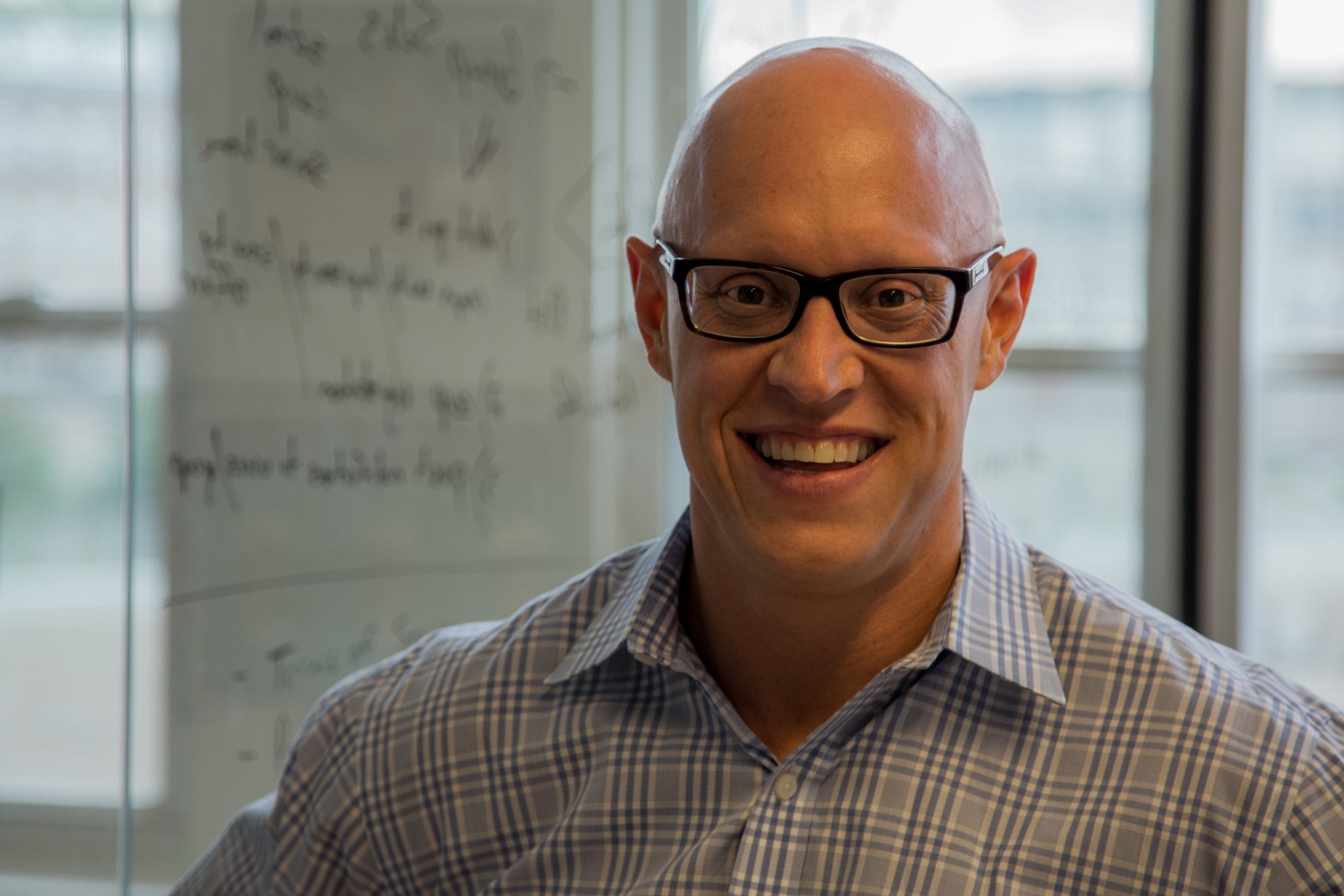 David Benoit of West Hartford is co-founder of Wearsafe Labs, developer of the Wearsafe Tag. Courtesy of Wearsafe

David Benoit of West Hartford is co-founder of Wearsafe Labs, producer of the revolutionary ‘Wearsafe Tag.’ 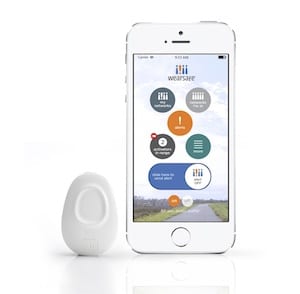 The Wearsafe Tag (left) works in connection with an iPhone. Courtesy of Wearsafe

Friends, family, and smartphones – not necessarily in that order – probably top any “most important” list for a huge chunk of the population today, and West Hartford resident and co-founder of Wearsafe Labs David Benoit has helped develop a platform that can connect those three and enhance personal safety in a revolutionary way.

“I don’t want to change your lifestyle,” said Benoit, who is aware that while many people don’t want to have to carry around one more thing, or activate a device when they leave the house, they also don’t want to feel like they’re unsafe and always looking over their shoulder.

The Wearsafe tag is small – a bit larger than a quarter – and is engineered to fit comfortably in the palm of the hand. “Like smooth skipping stone,” Benoit said. It can also be attached to a keychain, or clipped unobtrusively to the inside or outside of a pocket.

Wearsafe uses low-energy Bluetooth technology, but despite its size and strength, it’s designed to provide users with a significant amount of safety and power. 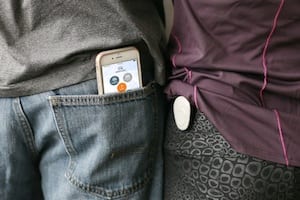 A Wearsafe Tag can easily clip onto a pocket. It connects with an iPhone that is in the range of 200 feet. Courtesy of Wearsafe

Here’s the quick description of how it works: One press of the Wearsafe tag will silently activate the app on your iPhone. Your prearranged network – and you can have various networks set up in advance so that they are in proximity to wherever you may be – receives an alert in the form of a text, email, and screen notification. Included in that alert is streaming audio, although nothing on your own phone indicates that it is recording. Your phone’s GPS is activated and that information is provided to your network. The app also connects your network through a private chat so that they can determine what kind of help you need. Contacts can directly request emergency assistance from the app as well. (Click here for full details on operation.)

Why do you need it? You may have your phone nearby, but can’t unlock it quickly. Or you may not want to draw attention to it. Or an attacker may grab it. 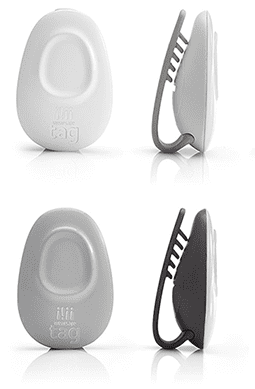 The Wearsafe tag has a vibration motor that no one can hear but you can feel. You will also know through mini vibrations that your network is helping you.

“It’s like the ‘easy button,'” Benoit said. “It doesn’t light up but it collects information and your friends and family can hear what’s happening. Maybe you don’t need 911, but your friends can intervene,” Benoit said.

A primary target market for Wearsafe is college students, and Benoit believes it can help prevent assaults. “Our hope is for someone to reach out early to have the situation not even happen. But if it does, police and campus safety will have additional evidence,” Benoit said.

The knowledge that the product is out there and potentially in use can also be a significant deterrent, Benoit believes. “People want easy opportunities,” he said. But if students are part of a student body that has this product available, it’s not so easy.

Wearsafe has been tested with students at the Pratt Institute and at Trinity College. “These kids went nuts. They loved every aspect of it,” Benoit said. “Empower” was the word used most often by the students who carried the device.

In addition to students and universities, Benoit said that “active outdoor enthusiasts” are another primary market. “By focusing on these groups it will have adoptability up and down,” he said. Real estate agents, people who travel or visit customer sites (often alone), teachers, and others will carry it to feel safer.

Benoit and co-founder Phillip Giancarlo of Lebanon, CT, got the idea for Wearsafe after the horrific Cheshire home invasions. The potential benefit from a product like it became apparent again in June when a female jogger was assaulted in broad daylight while running alone on a Rails to Trails path in Avon. 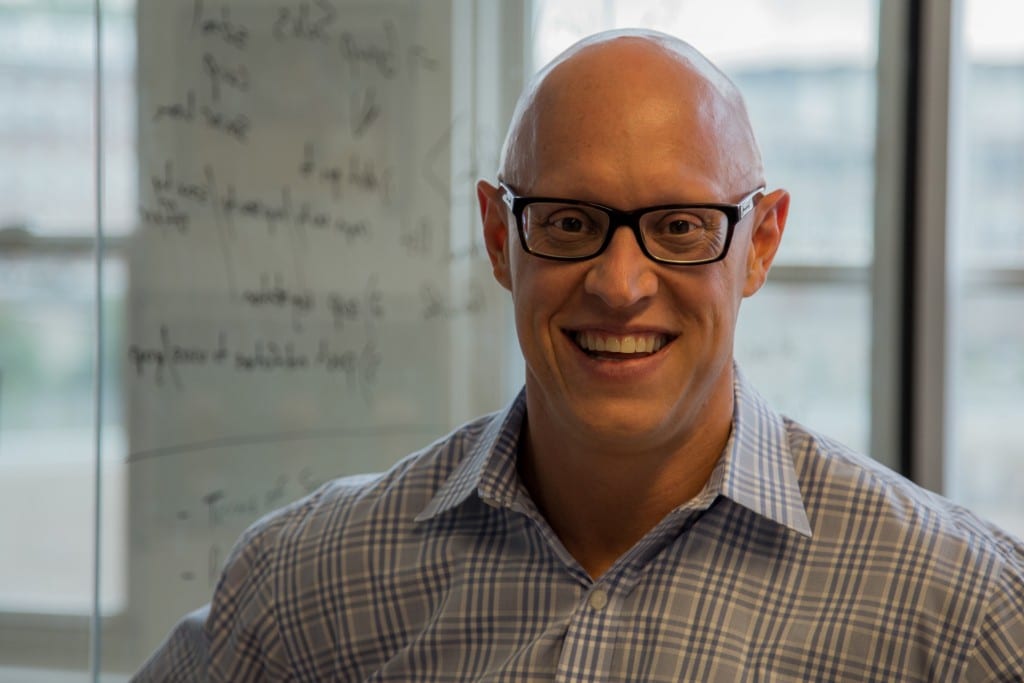 David Benoit of West Hartford is co-founder of Wearsafe Labs, developer of the Wearsafe Tag. Courtesy of Wearsafe

After the Avon incident, Benoit got in touch with Steph Blozy, co-owner of West Hartford’s Fleet Feet Sports. Blozy has been working with Connecticut-based Jane Doe No More and Olympian Todd Williams of RunSafer to host a series of classes for customers on how to escape attackers, but loves Wearsafe as a discrete and powerful additional layer of protection.

“It gives us back just a little more of our independence, and lets us live the life we want to live,” Blozy said. It “empowers” people, said Blozy.

In her weekly newsletter to customers on Tuesday, Blozy heartily endorsed Wearsafe. “This product is something I believe every runner and cyclist should carry with them – not to mention college studetns, revelers, business travelers, and aging parents. The tag could prevent a bad situation from happening, empower a victim to be calm and strong, and hopefully help catch the perpetrator quicker,” Blozy said.

Benoit said that Donna Palomba, the sexual assault victim who founded Jane Doe No More, is also impressed by the Wearsafe. “She said that [Jane Doe No More] ‘has never endorsed a product but I firmly believe that if this product was with me that night it could have been different,'” Benoit said.

Wearsafe has been in development for more than three years, and Benoit seems to have addressed every question someone might have with the result being a simple yet incredibly powerful technology. He has held countless focus groups and received input from students and university administrators. Former U.S. Secret Service Agent Rich Staropoli has been a close advisor. The size and shape of the device have been carefully engineered for comfort, range, and efficiency.

Wearsafe costs $38, and the service is $4.99 per month, billed through iTunes. The device operates on a standard lithium battery that can hold a charge for 6 months to a year.

The Wearsafe tag is just the first version, Benoit said. The platform is already being integrated into Pebble smartwatches where a button on the watch acts as an activator. They are also looking at other fitness trackers as well as integrating it into clothing. Benoit sees a huge potential in partnering with other products.

Wearsafe launched a Kickstarter campaign on July 14, with the goal of raising $75,000 by Aug. 20. Funds raised through the Kickstarter campaign will fund a fall product launch and “allow the company to take its first steps in their journey to 10 million lives in 10 years (#10millionlives).”