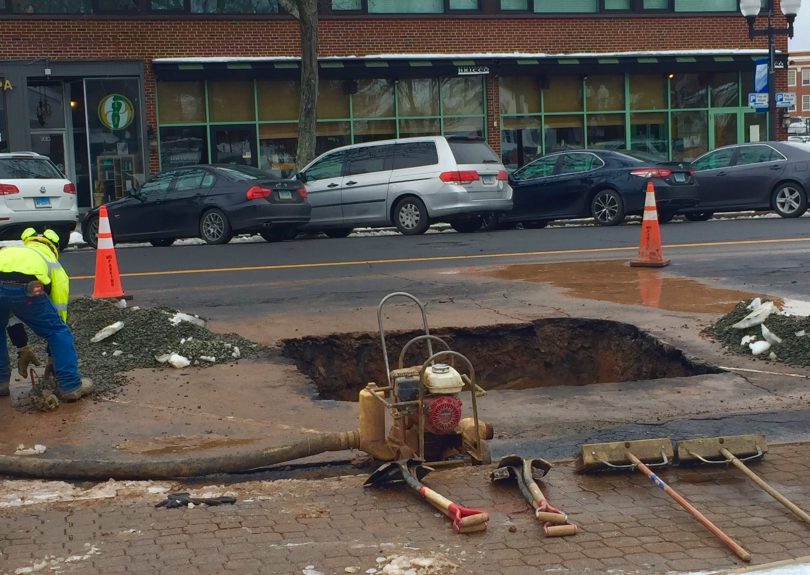 [Updated, 4 p.m.] The Metropolitan District Commission said just after noon Wednesday that there had already been three water main breaks in West Hartford, including one that resulted in water being turned off for an entire block of LaSalle Road in the Center. 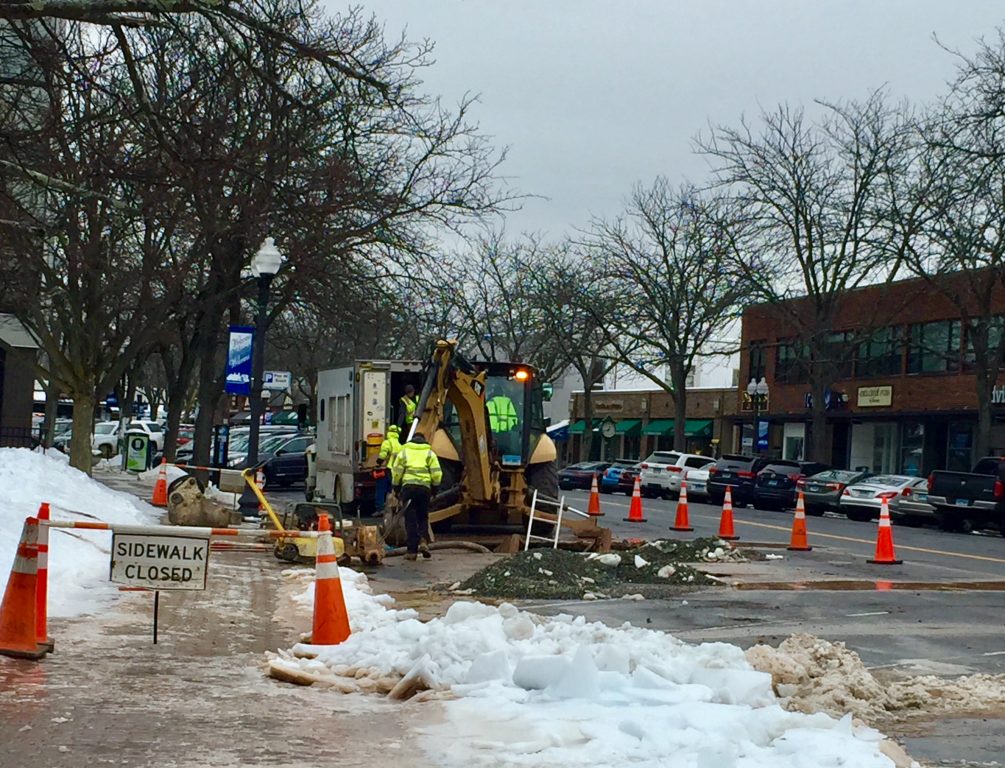 A water main break that led to the shutdown of water to the entire stretch of businesses along LaSalle Road, from Farmington Avenue to Arapahoe Road, had been repaired by about 12:30 p.m. Wednesday, but Metropolitan District Commission spokesperson Kerry Martin said that two other breaks in West Hartford had occurred.

By 3:35 p.m., repairs to all three breaks had been completed.

“The ground freezes, then it thaws and heaves, and that moves the pipes around,” Martin said. The severe cold several days ago, followed by rising temperatures, can put great stress on the pipes.

Martin said that at approximately 6 a.m. Wednesday, the MDC was notified of a possible water main break in the vicinity of 76 LaSalle Rd. The 8-inch main was installed in 1929, she said.

Crews responded and confirmed that it was actually a break, and all businesses on LaSalle Road, from Farmington Avenue to LaSalle Road, were notified in advance that their water would have to be shut off at around 9:30 a.m.

The repairs were estimated to take six to eight hours, Martin said, but were completed far ahead of schedule. Water service was restored around 12:30 p.m., and repairs to the roadway began.

“We estimate it will take longer in the winter, because of the chance that there will also be frozen valves,” Martin said.

In addition to the break in the Center, Martin said that MDC crews were working to repair two other broken water mains in West Hartford.

An 8-inch water main broke at 876 Mountain Rd., in the far northwest corner of West Hartford, and around noon water was shut off to 24 homes on Mountain Road, Cranbrook, and High Wood. In that case, the other roads were impacted because of frozen valves, Martin said.

Mountain Road was closed in the area of the break while work was underway.

The MDC initially estimated that service would be restored between 5-7 p.m. Wednesday, but Martin said that the repair work was completed and the water was turned back on at 2:15 p.m.

A third water main break occurred in an 8-inch main in the area of 15 Pilgrim Rd., near the intersection of Albany Avenue, and just across from the University of Saint Joseph.

Water was shut off to 14 properties at 12:15 p.m., Martin said, and Pilgrim is closed to traffic from Colony Road to Albany Avenue. That break is expected to be repaired between 5-7 p.m., but was completed by 3:35 p.m.