What a difference a week makes!

It’s a good thing I’m not a meteorologist.

In last week’s column I wrote about winter’s return, and how it looked like the snow would be here to stay. Although my backyard still has a good cover of snow, it’s less than half as deep as it was last week. The path my husband had shoveled for the dog is down to the grass – grass that even looks green rather than brown. Weekend temperatures were well into the 50s and even the low 60s – perfect for my 10-mile run on Saturday (yes, I’m a bit crazy), walking the dog, strolling West Hartford Center, and pretty much anything that involved being outside without wearing a down coat. 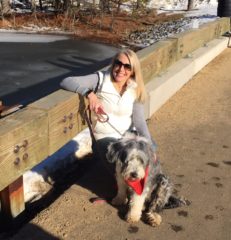 Sunday afternoon’s temperature topped 60, and it was a great day for a walk at the reservoir. Photo credit: Ted Newton

On Sunday we joined what had to be at least 1,000 people and just about as many dogs at the Farmington Avenue reservoir. Scarlett had a great time, but with all of the melting snow her paws did get a bit muddy.

I’m loving the 65º that I see forecast for Thursday!

I want to give a shout-out to both of my kids, who were two of the 2,718 dancers participating in HuskyTHON 2017 at the Hugh S. Greer Field House at UConn between 6 p.m. Saturday and noon Sunday. The 18-hour dance marathon, one of the country’s top college fundraising events, raised a staggering $836,174.52 this year for Connecticut Children’s Medical Center! That’s about $120,000 more than was raised last year, and last year’s event broke records. My daughter Katie has participated with her sorority, Delta Gamma, for all four years that she has been at UConn, and this year her team alone raised $56,502.61, third place among all participating teams. There were a few other West Hartford residents on the DG team – including Bianca Speranza, Sydney Lyons, Grace Murray, and Olivia Dugas. My son Sam, a freshman participating for the first year, was part of the Phi Gamma Delta (FIJI) team that raised $9,024. 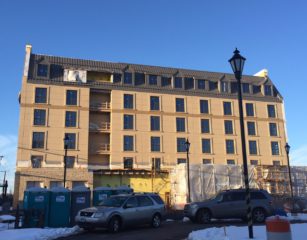