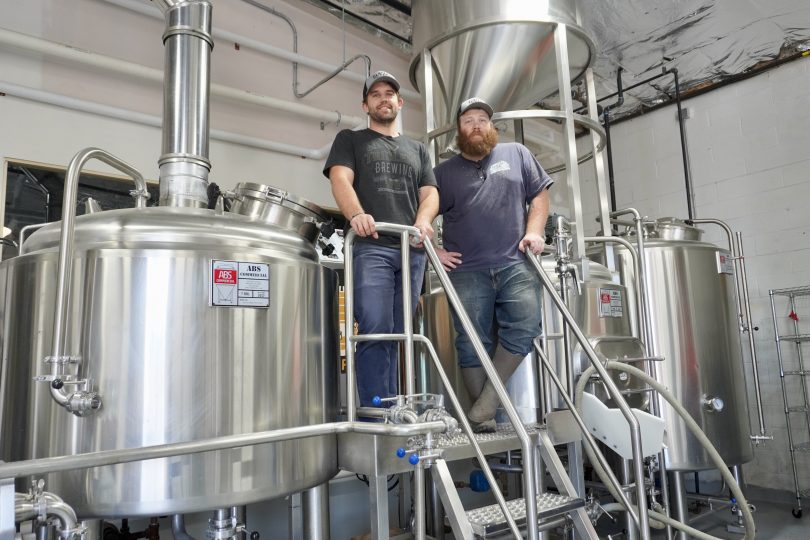 I hope everyone enjoyed the beautiful weekend! Saturday and Sunday mornings definitely had a fall feel.

It cleared up Friday afternoon just in time for the Conard vs. Farmington boys soccer game, where I went to take photos and even wrote a brief story. (Click here to read it.) My son had been asked to be the announcer for the game – his first time ever doing something like that – and I also couldn’t resist observing his debut, which was great!

Ted and I had an experience Friday night we hadn’t had in more than 18 months – live theater, indoors! To be admitted we presented our vaccine cards and ID, and we wore masks at all times, and it was wonderful to be back at Playhouse on Park. We throughly enjoyed the timely comedy, “Two Jews Walk into a War.” 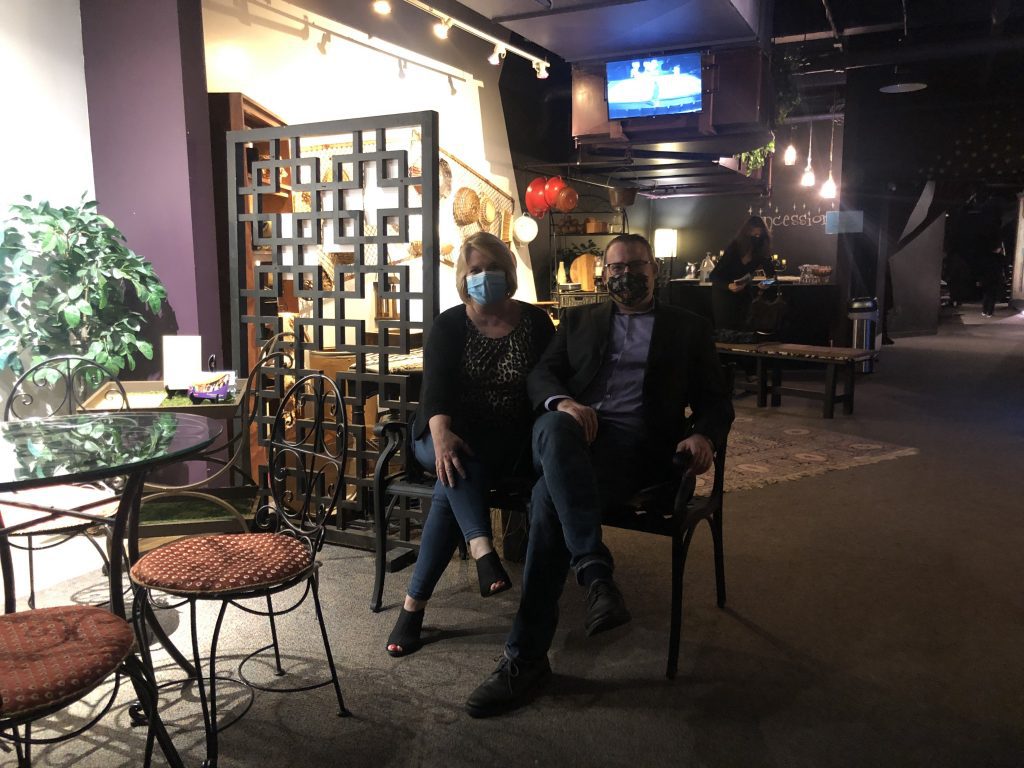 We went to the UConn football game on Saturday, and it was definitely the most exciting game they’ve played in a few years. While the Huskies weren’t able to pull out the win in the end, they were in it until there were 4 seconds left on the clock. I now have hope that they will win a few games this season, and no matter what also think it’s important to support the team for their hard work.

This Saturday night’s dining adventure was a trip to GastroPark, and it was fun to be able to have Millie (who had been home alone all day) accompany us. I love the new swing seat, and the inside bar looks great, too. 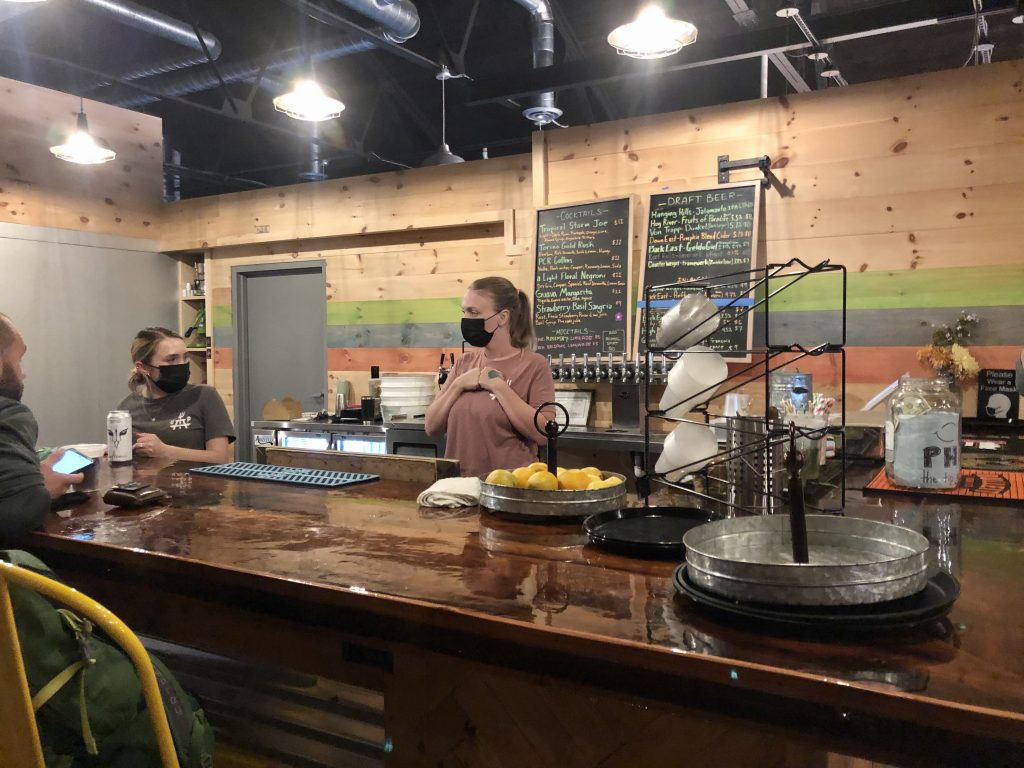 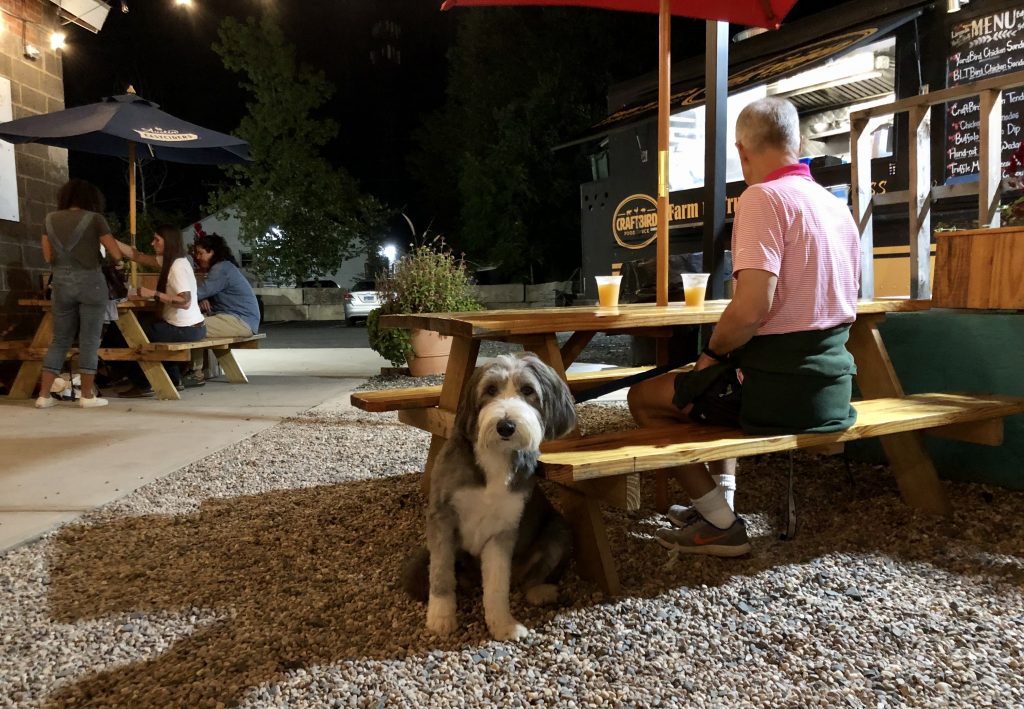 Millie was able to accompany us to GastroPark. Photo credit: Ronni Newton 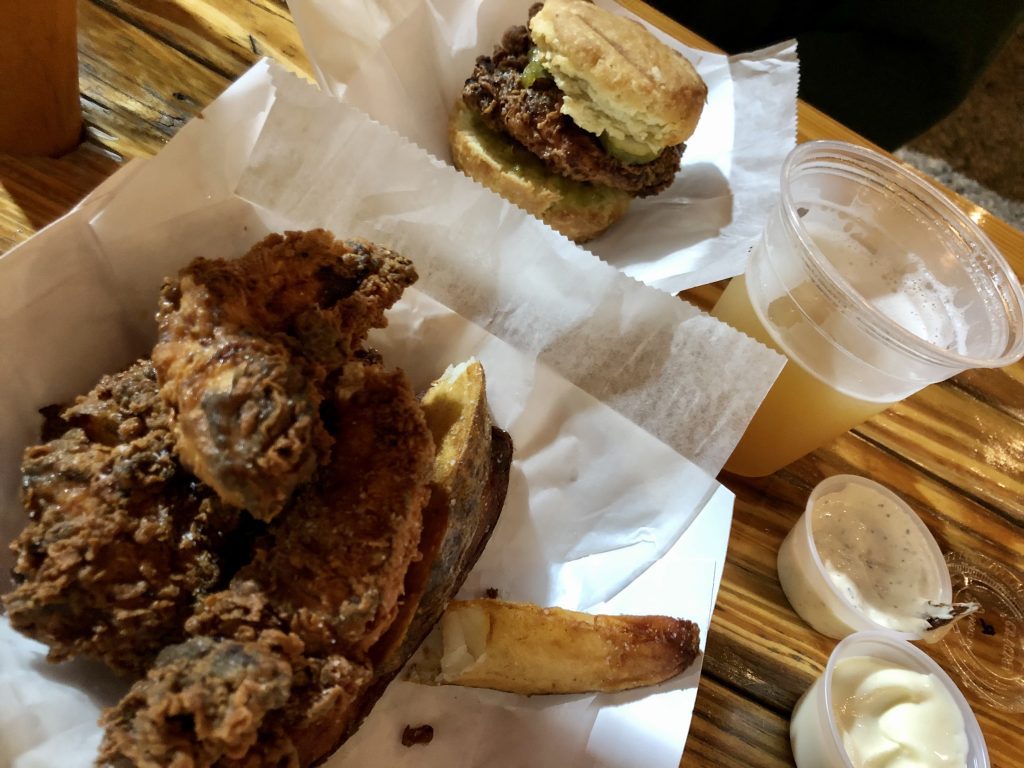 When Millie gave me that look, I couldn’t resist sharing a bit of my Craftbird chicken with her. 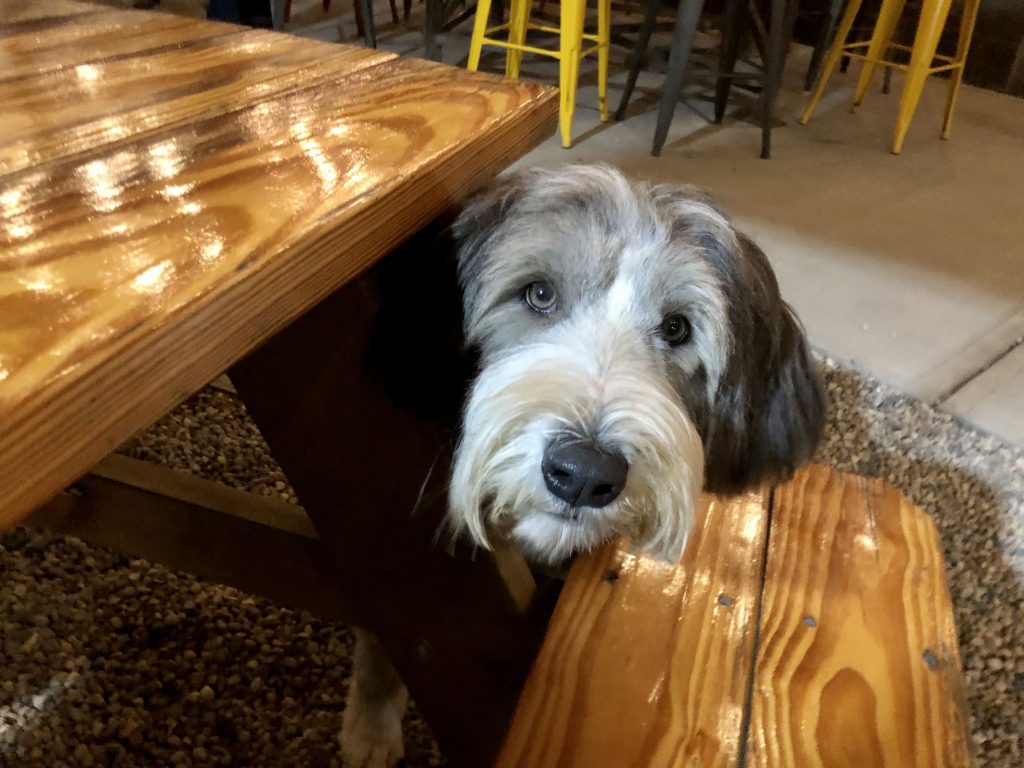 Millie was able to accompany us to GastroPark. Photo credit: Ronni Newton

I had a number of meals outside of the house last week (one of which was at Fuego Picante, see bullet point below), including meeting a friend for breakfast at DORO Marketplace. It’s a good thing my foot seems healed and I am back to running, which only partially makes up for what I have been eating lately! 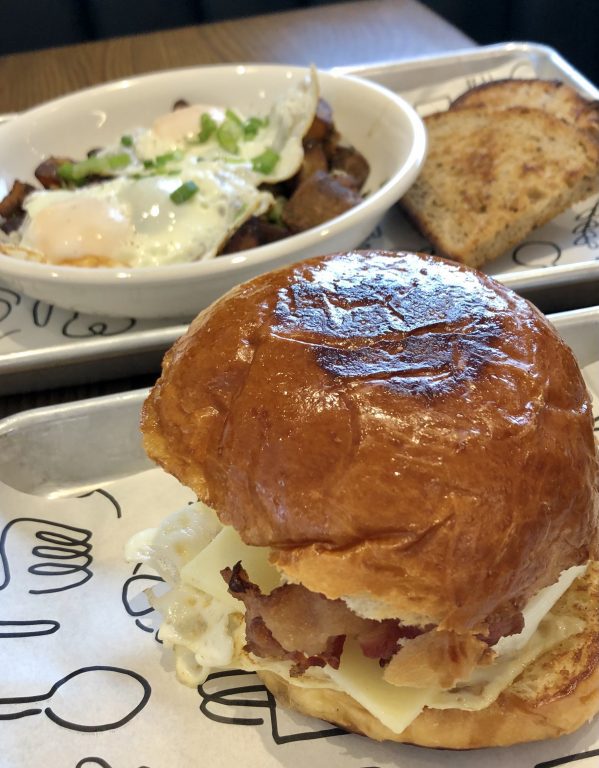 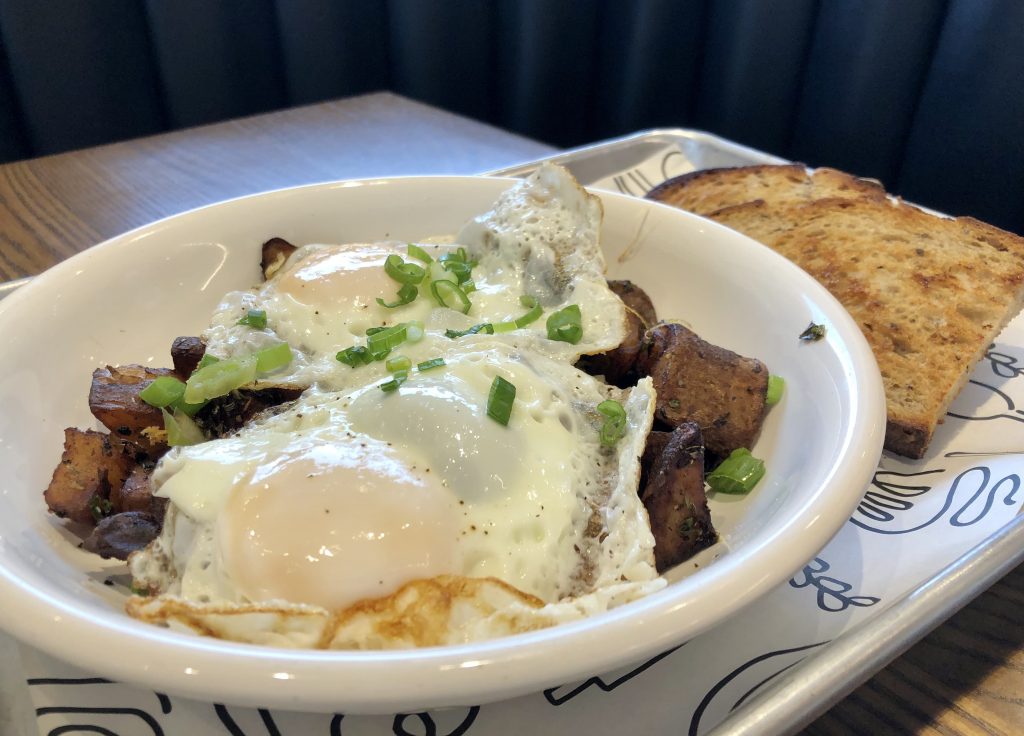 Please note asterisks are below between the intro and the bullet points in an attempt to provide more visual separation. From time-to-time I hear from readers that they really have no interest whatsoever in my life and that I shouldn’t bother writing this introduction, or I should put it at the end. (Others tell me they really enjoy reading it and that they enjoy the personal touch. Businesses also appreciate it, and I should add that Ted and I purchase our season subscription to Playhouse on Park with no discount, and we pay for all of the meals that get featured in this space.) If a majority want me to nix the introduction I’m fine with doing that, and please let me know.

I’m hoping that a clearer separation, however, will make it easier for those who just want to read the items included under the bullet points.

To all readers, please note that this is a column, and the writing style is intentionally more casual than it would be in an article. Much of it is also written in first-person – not just the intro, but also the information provided in the bullet points. The material contained in this column is gathered from a wide variety of sources, and clearly referenced (with a link if possible) if it’s based on a report from other media. I am fully aware that this column also often serves as an easy supply of story ideas for other media outlets (that very occasionally credit we-ha.com), and it’s also often is used to create leads for companies that are looking to provide services for new businesses. Sometimes I hesitate to put news in this column if it’s not yet a fully-developed story, but rarely do I actually hold things back (unless asked to by a business owner) because readers have come to count on learning something interesting from this column. 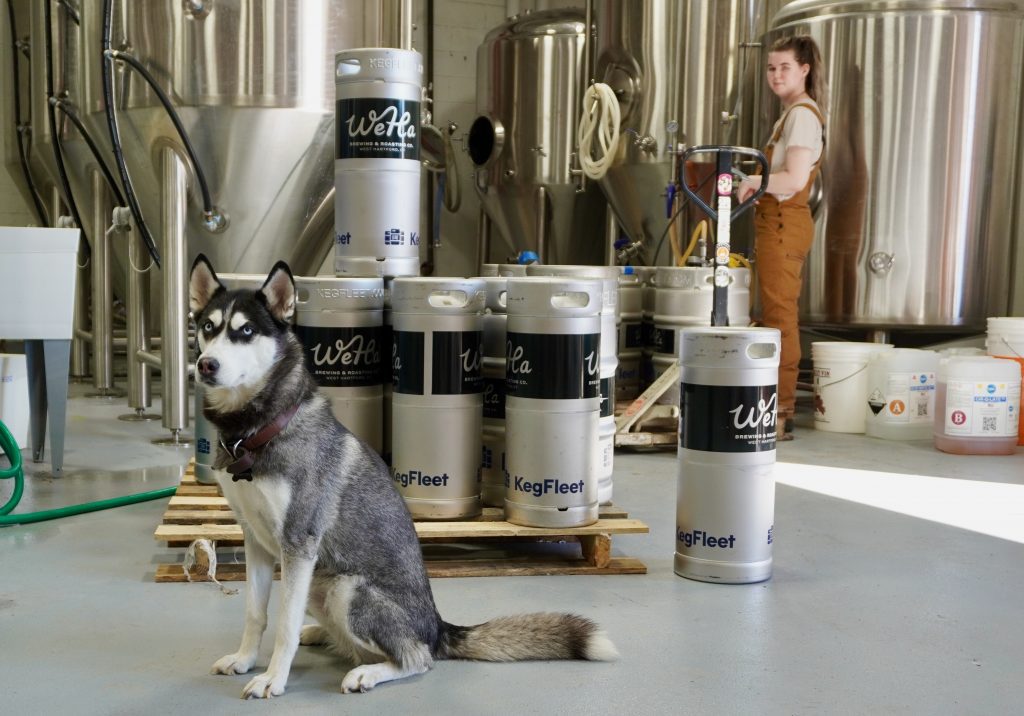 Mosaic, a husky owned by brewer Will Gorry, is one of the namesakes of the “Mo and Lo” New England IPA sold by WeHa Brewing & Roasting Co., opening soon at 141 Shield St. in West Hartford. Assistant brewer Taite Puhala is in the background. Photo credit: Ronni Newton 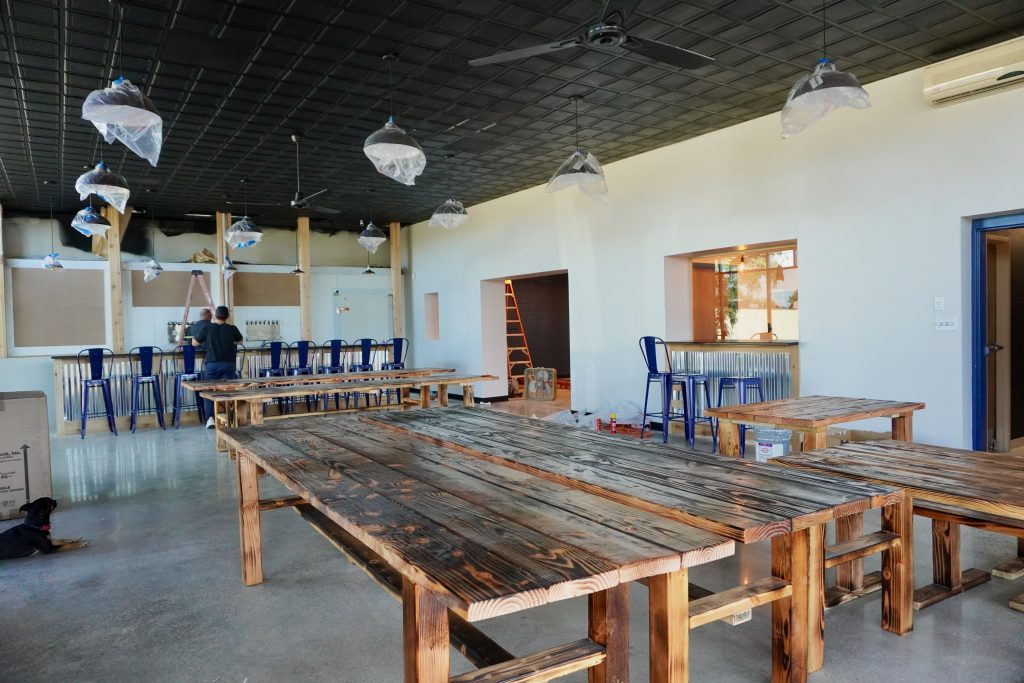 Beer hall tables have arrived and will be used for some of the 75 seats at WeHa Brewing & Roasting Co., which will be opening soon at 141 Shield St. in West Hartford. Photo credit: Ronni Newton 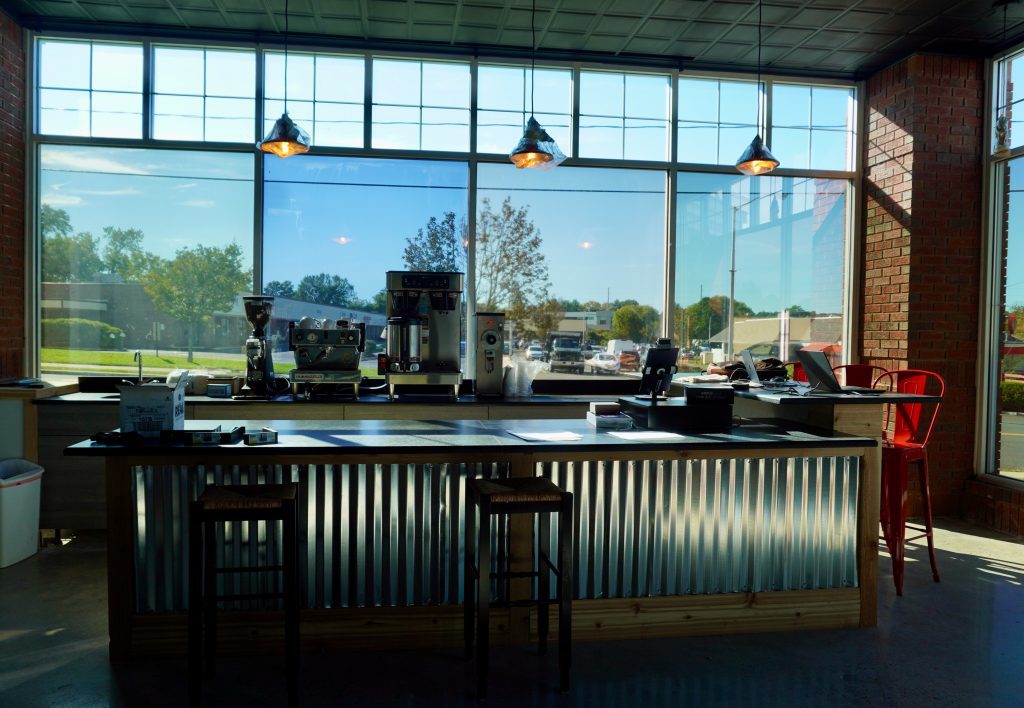 The coffee bar has a light-filled seating area at WeHa Brewing & Roasting Co., which will be opening soon at 141 Shield St. in West Hartford. Photo credit: Ronni Newton 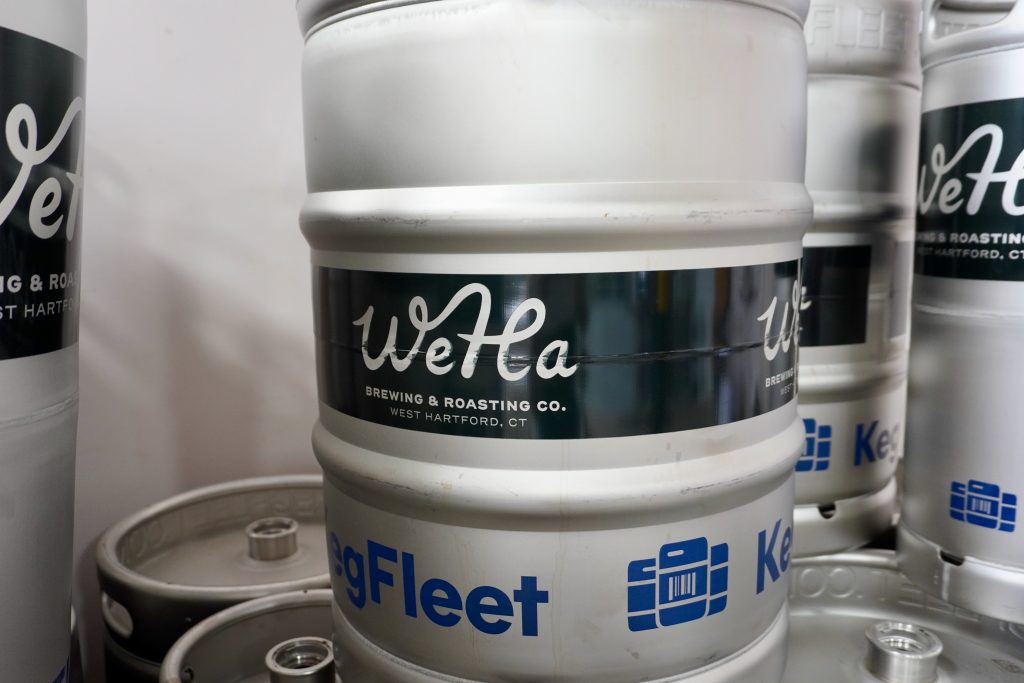 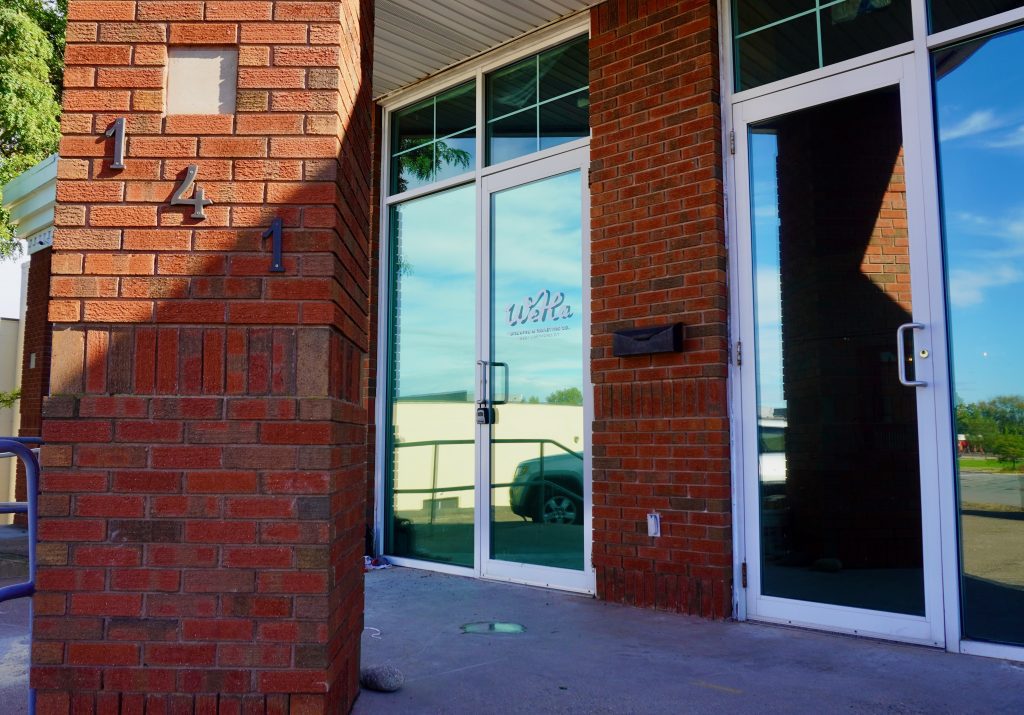 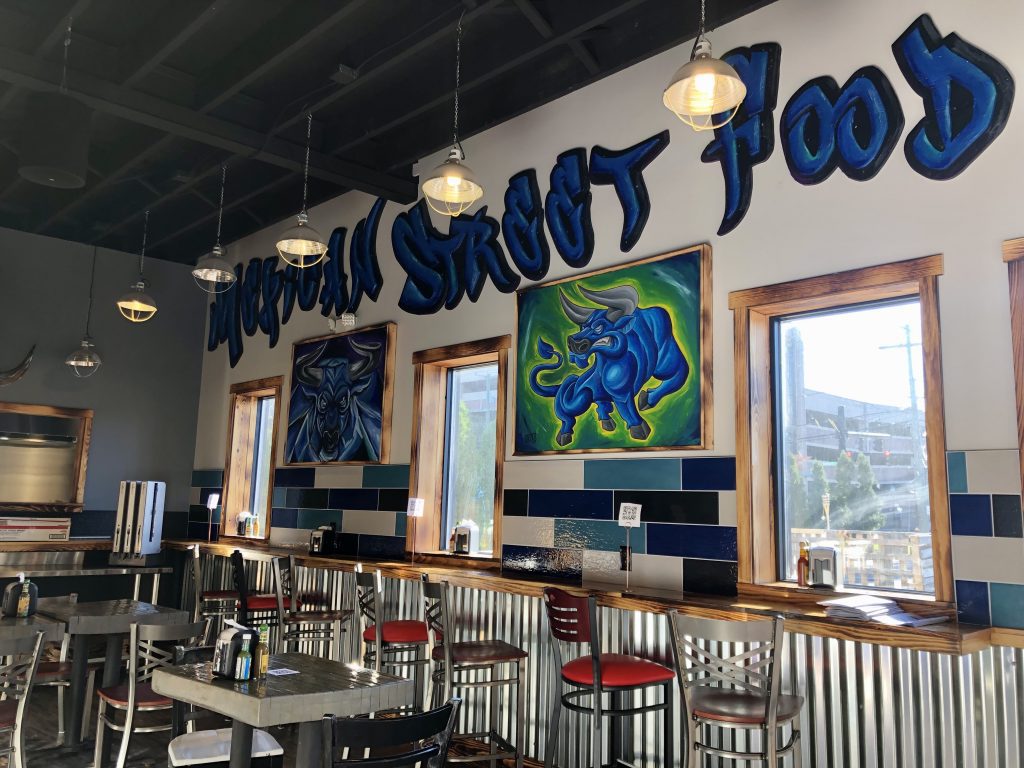 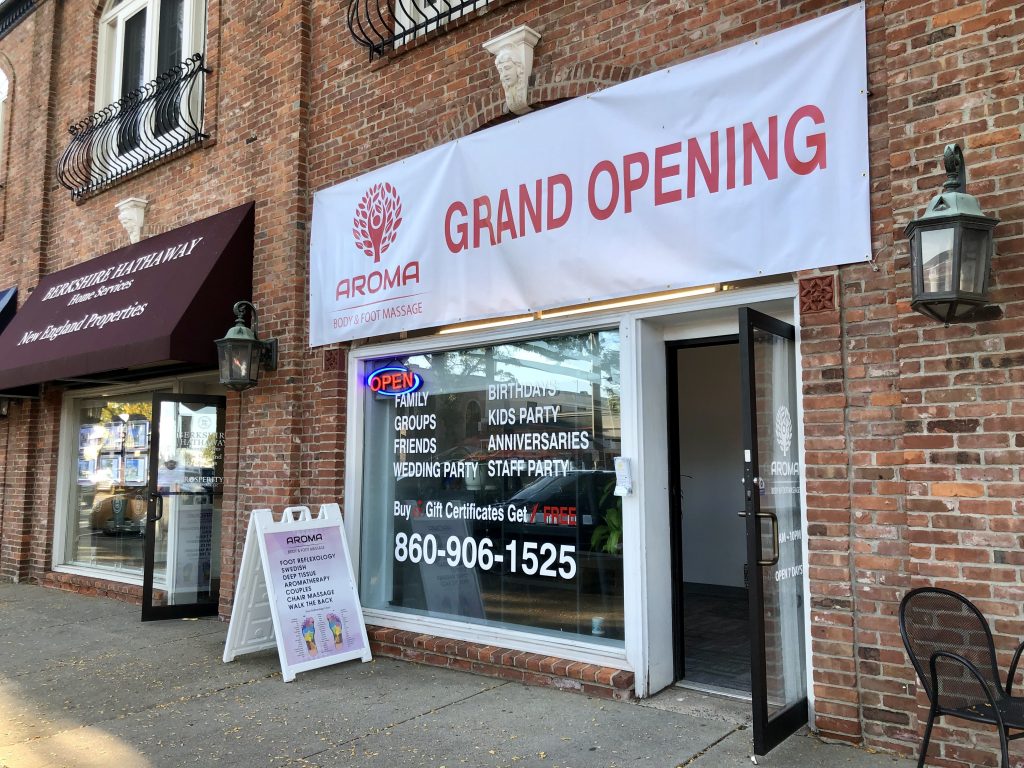 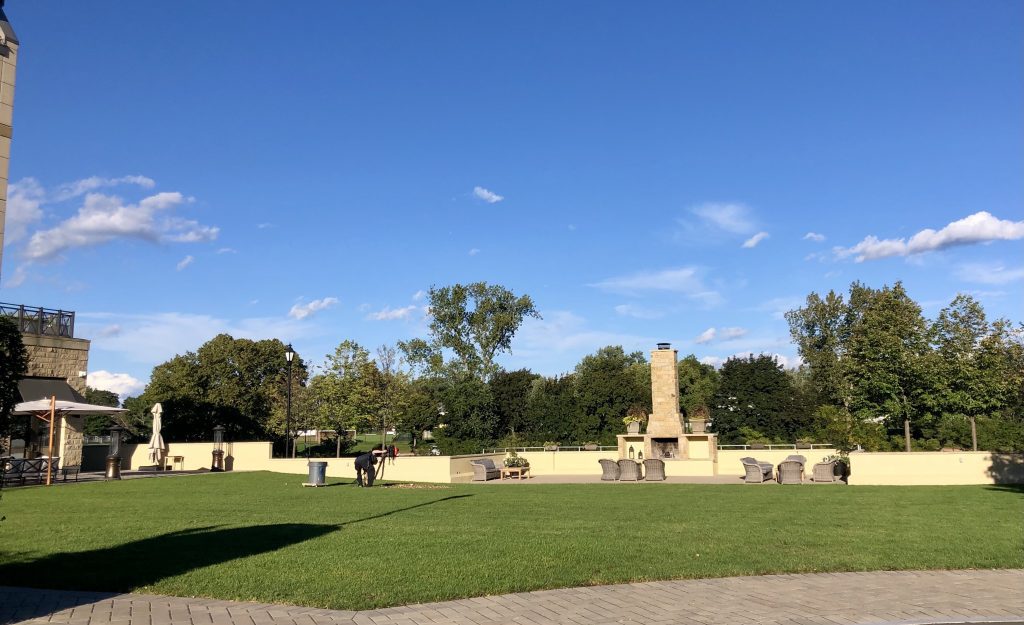 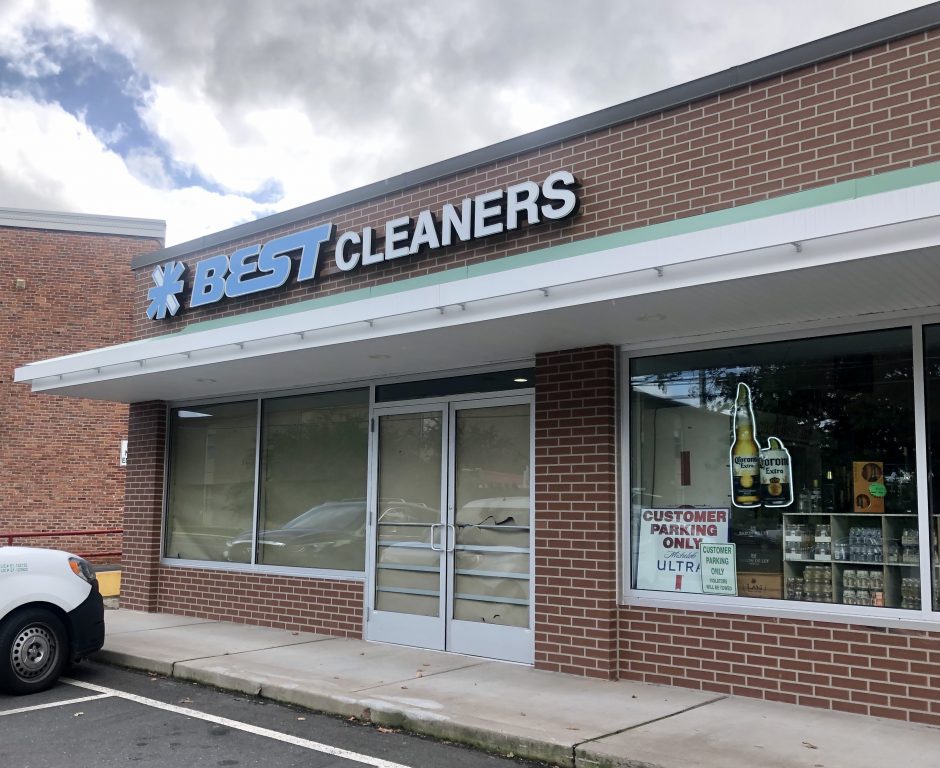 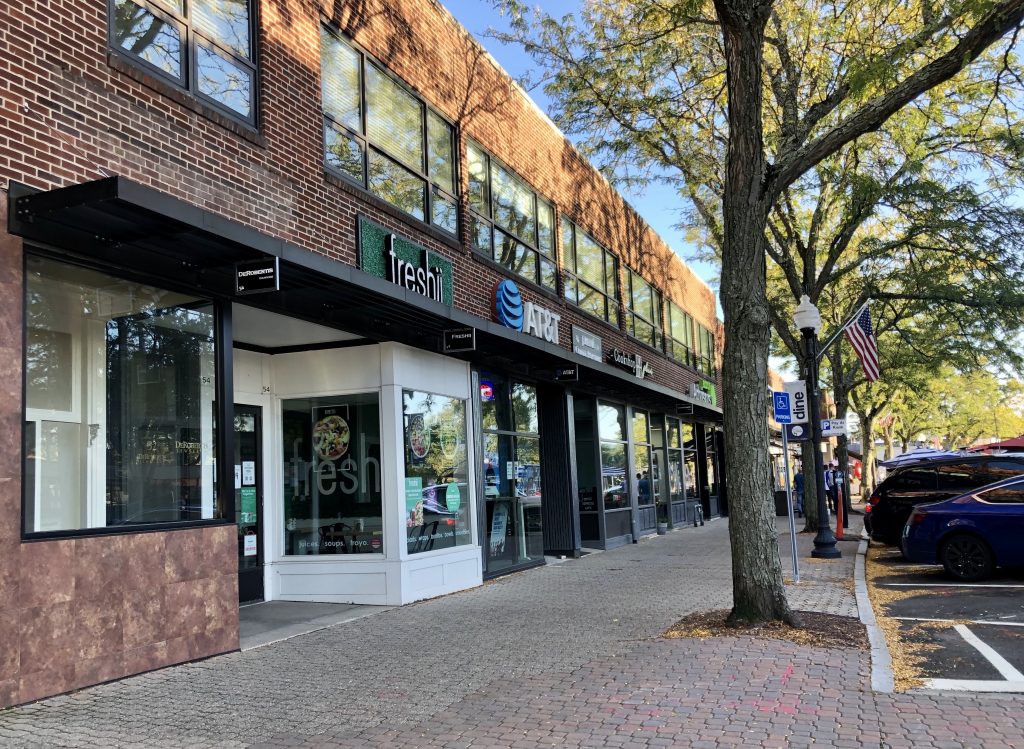 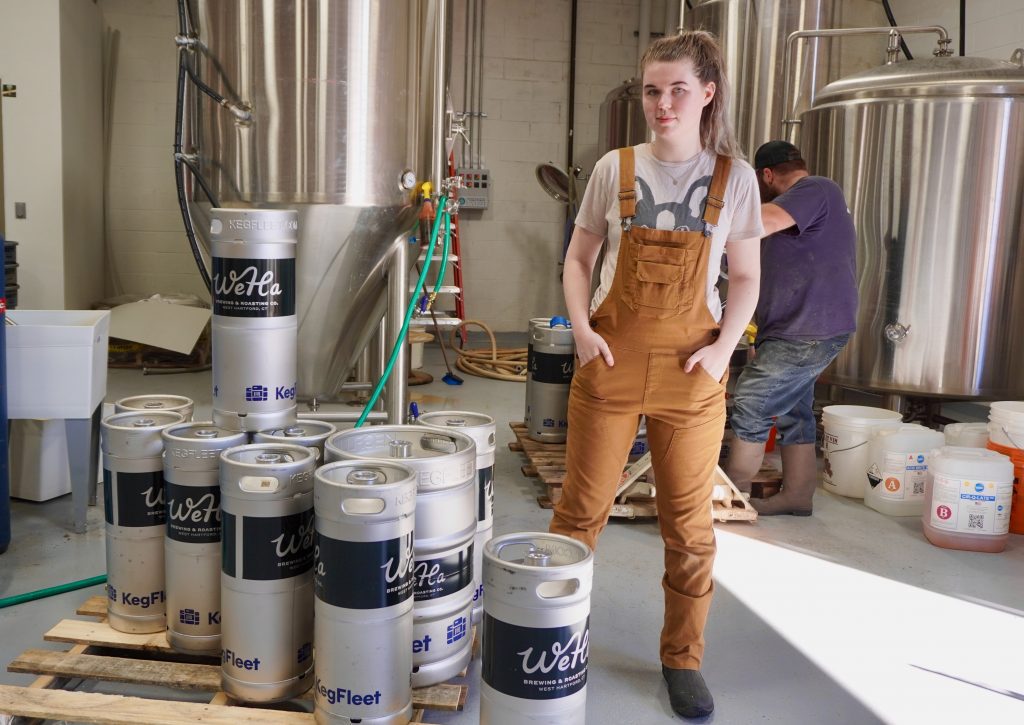 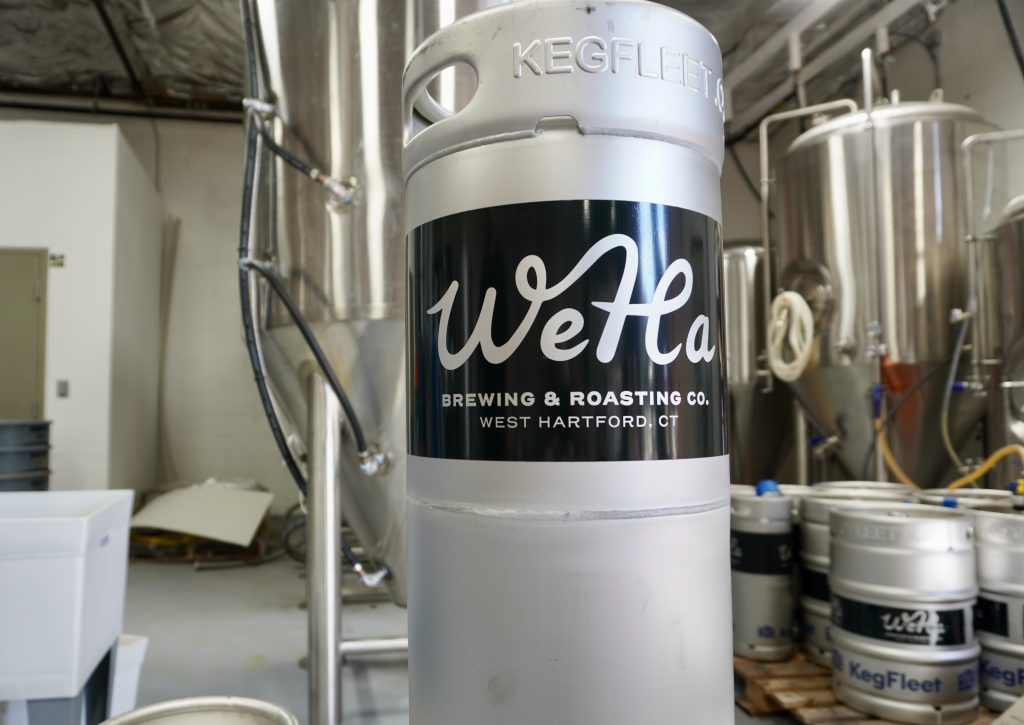 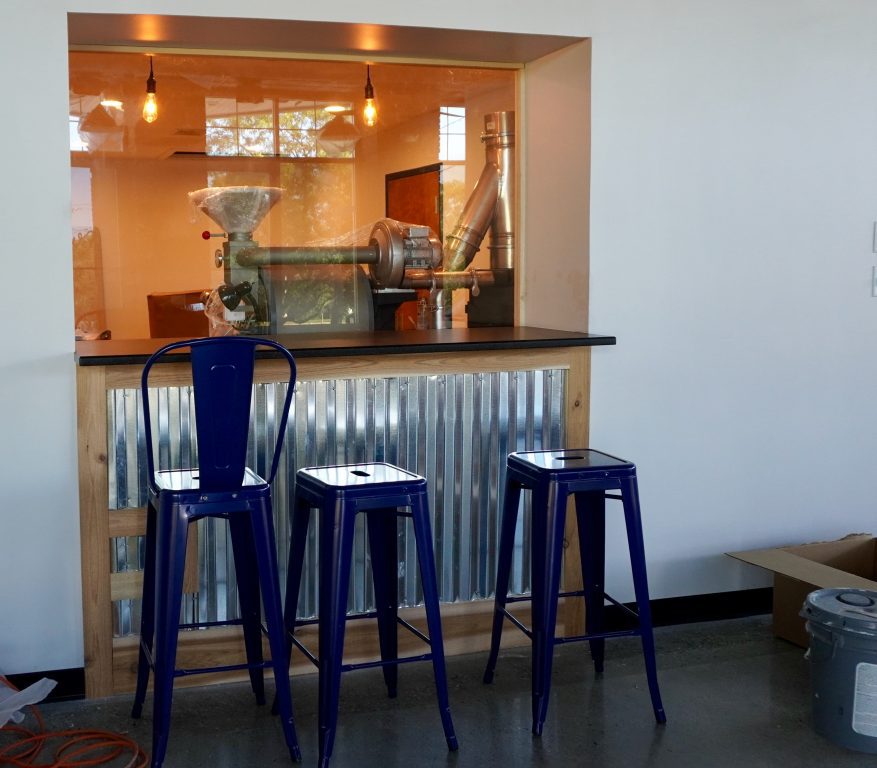 Seating is available with a view of the coffee roasting operation. WeHa Brewing & Roasting Co. will be opening soon at 141 Shield St. in West Hartford. Photo credit: Ronni Newton 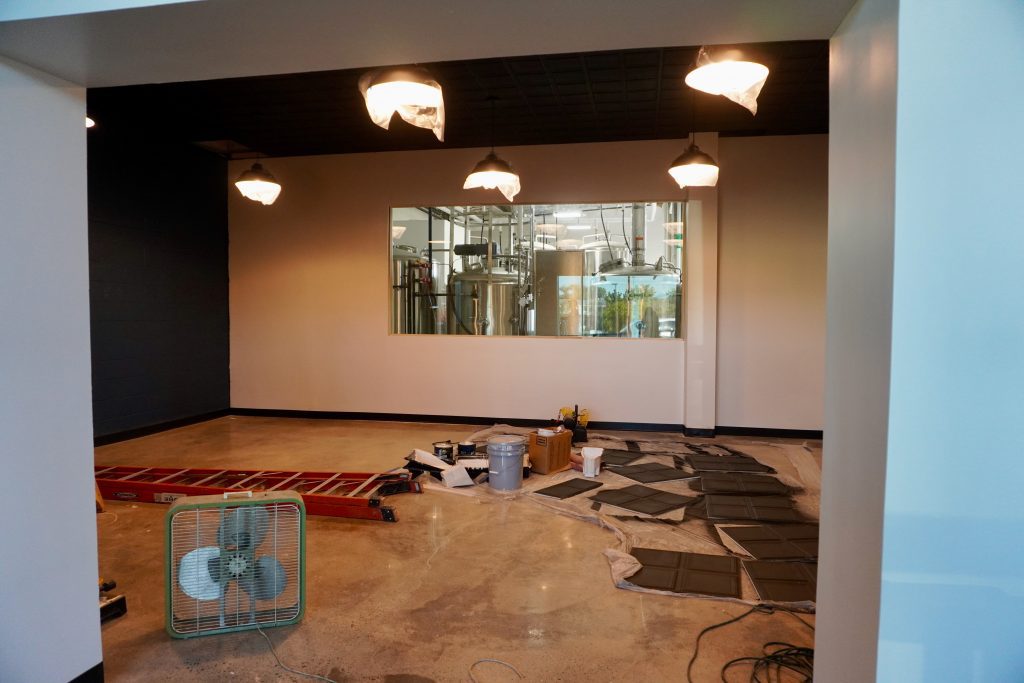 An event room can accommodate 25-30 people and when not reserved can be overflow seating, in addition to the 75 seats in the main room. WeHa Brewing & Roasting Co. will be opening soon at 141 Shield St. in West Hartford. Photo credit: Ronni Newton 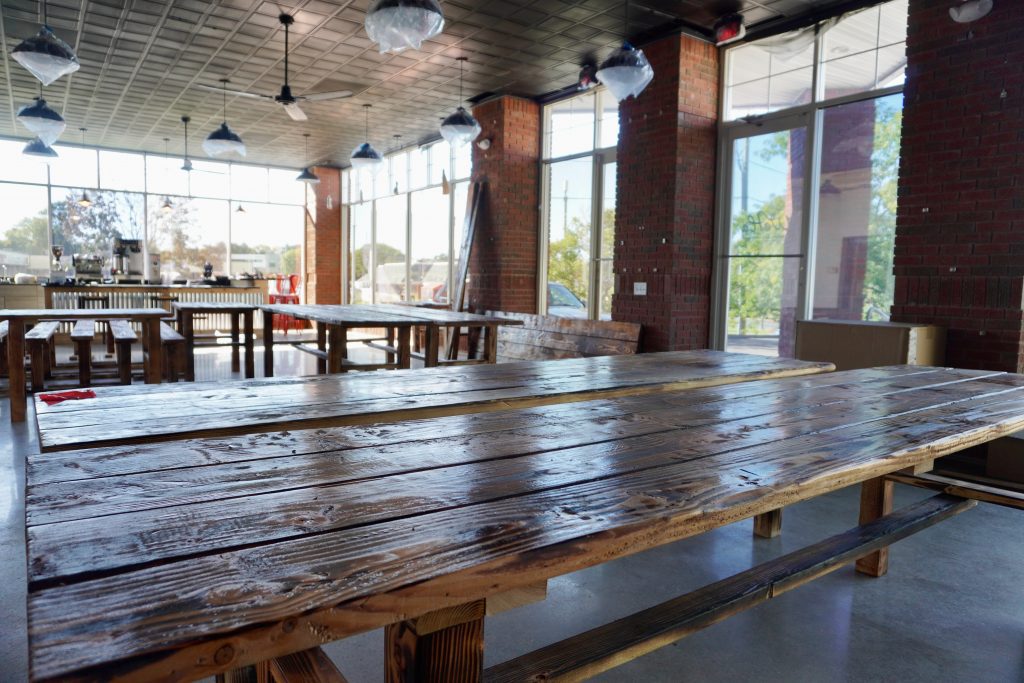 Beer hall tables will provide some of the seating at WeHa Brewing & Roasting Co., which will be opening soon at 141 Shield St. in West Hartford. Photo credit: Ronni Newton 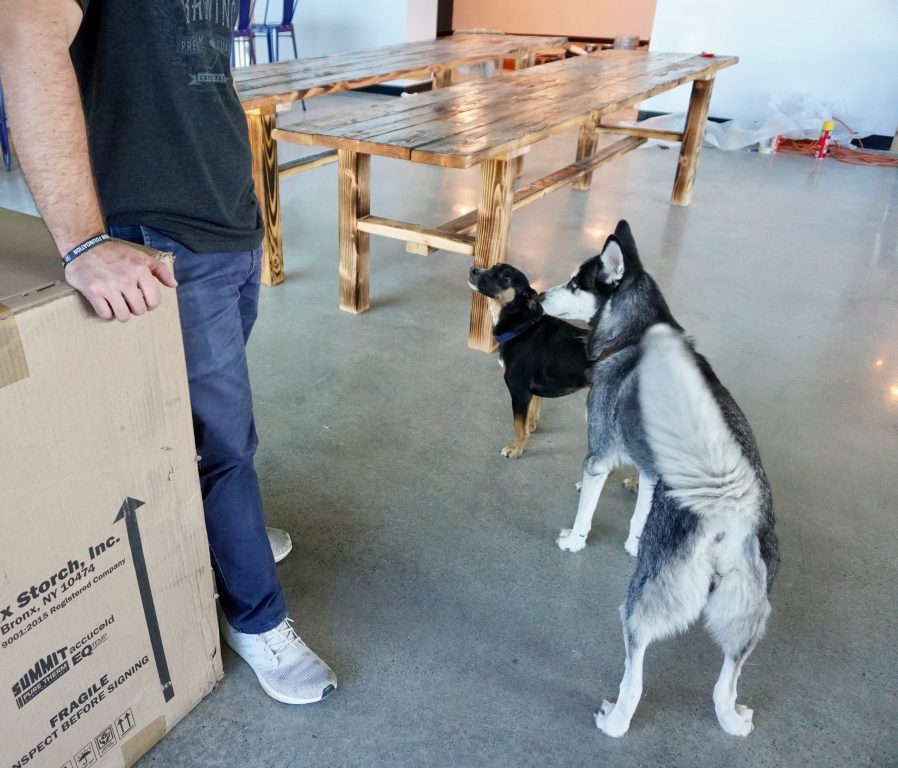 Logan and Mosaic – who are also the namesake of one of the IPAs– hang out with their owners who are preparing to open WeHa Brewing & Roasting Co. at 141 Shield St. in West Hartford. Photo credit: Ronni Newton 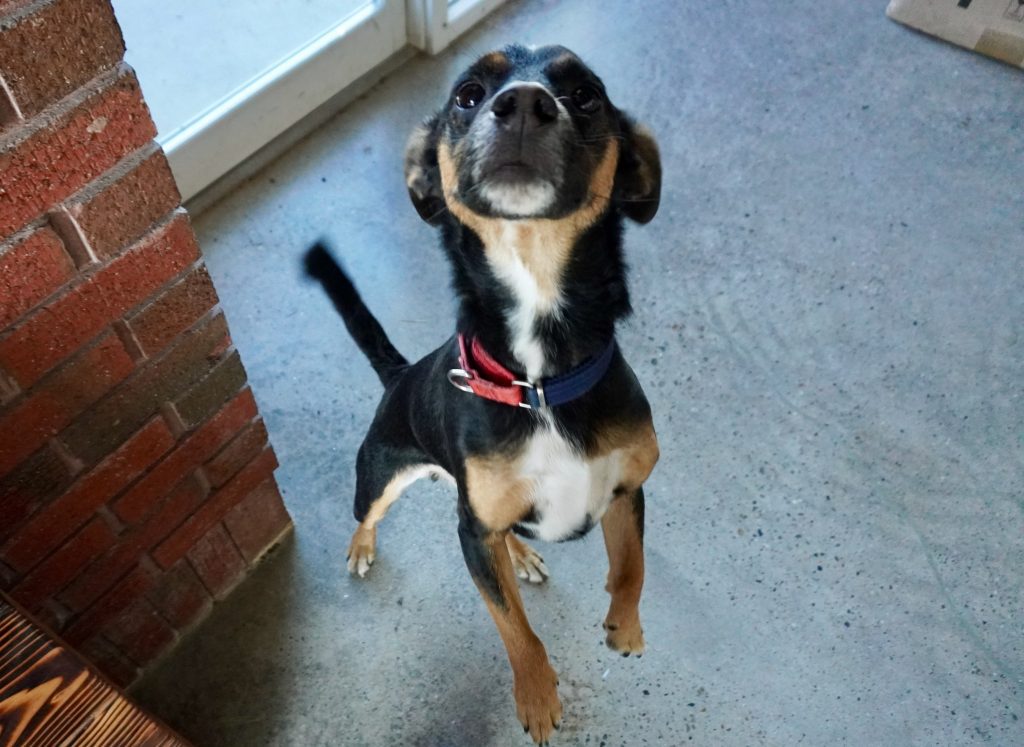 Cody McCormack’s dog, Logan, accompanies him to do some work at WeHa Brewing & Roasting Co., which will be opening soon at 141 Shield St. in West Hartford. Photo credit: Ronni Newton 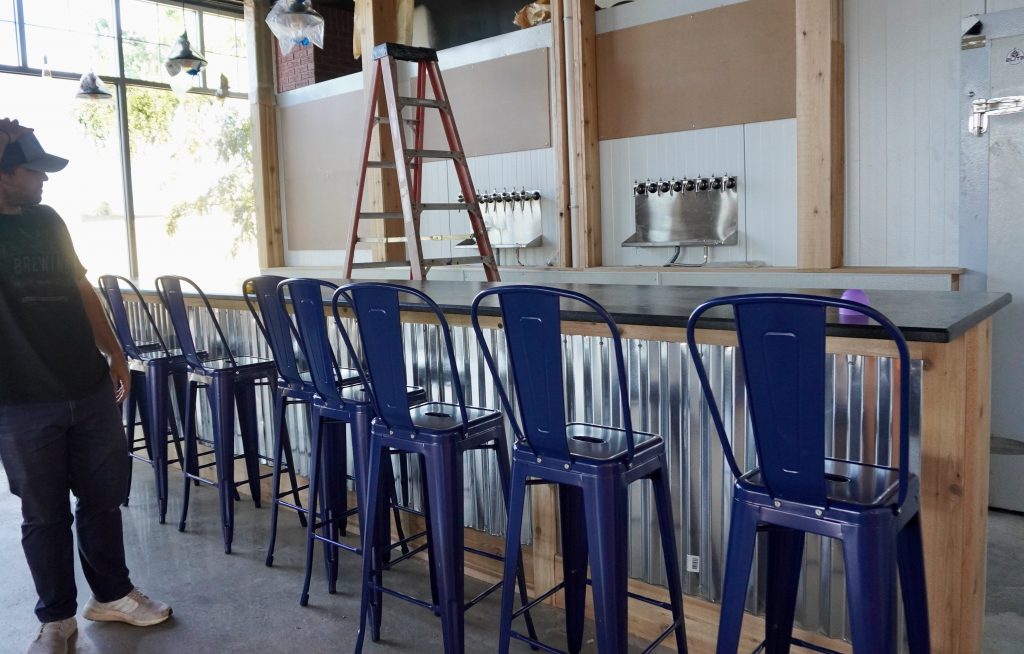 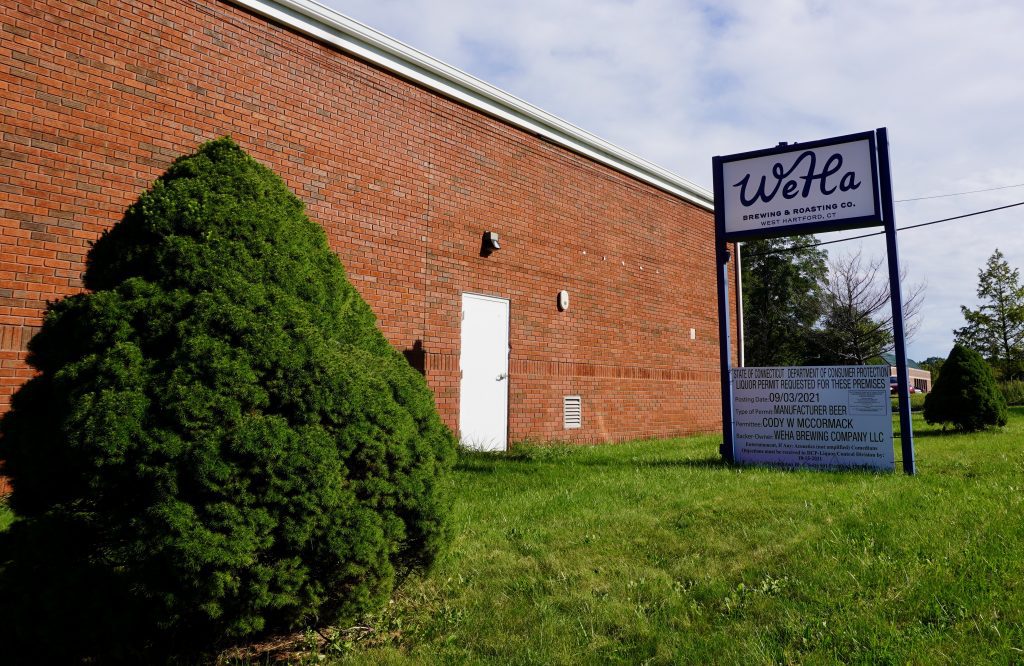