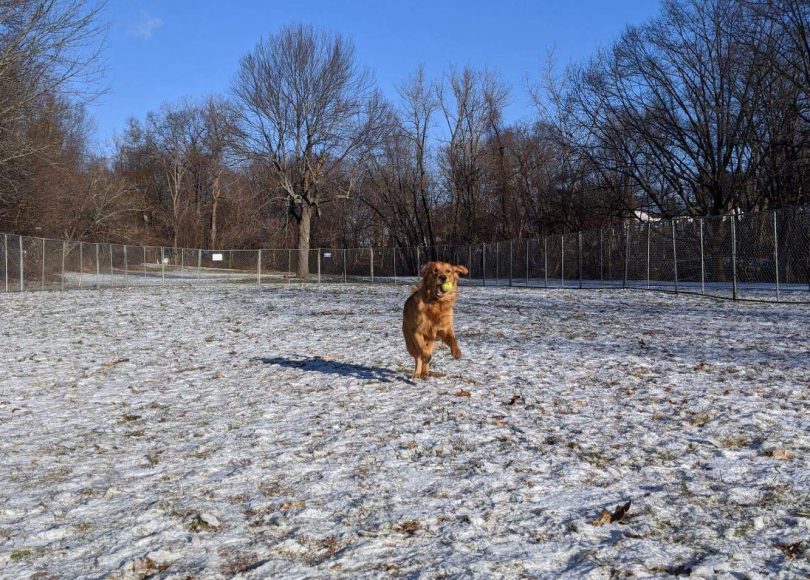 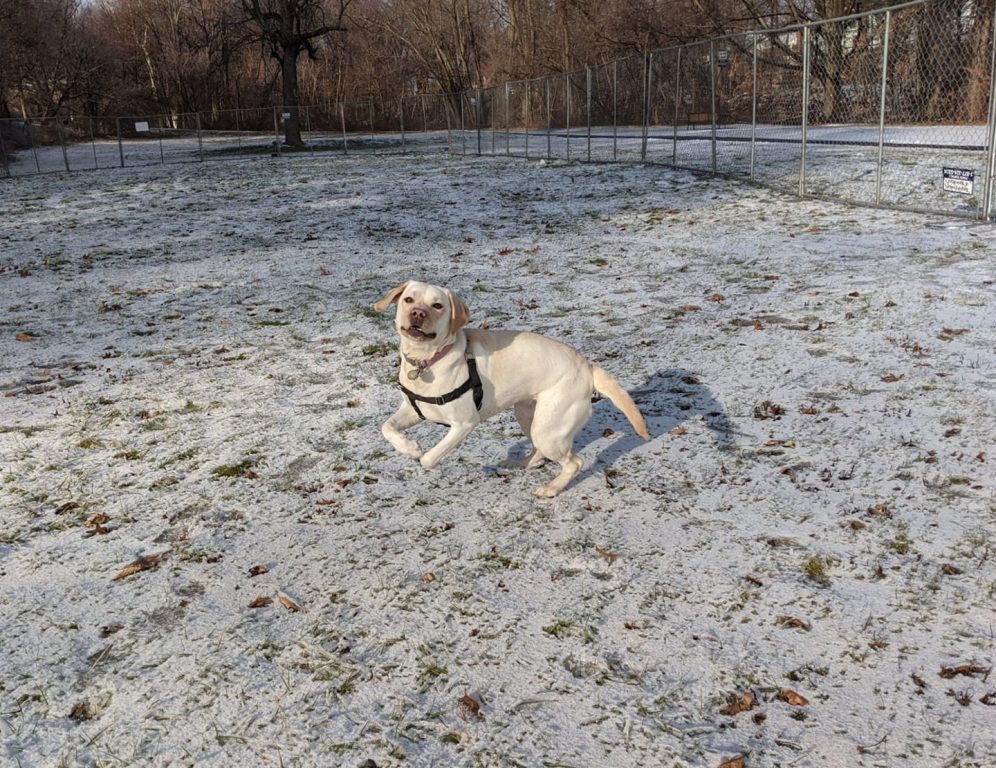 An ingaural romp in the West Hartford Dog Park. Courtesy of Phil Karlin

West Hartford’s dogs can now frolic together off-leash without leaving town, and do so legally – at least during a three-month period when a corner of Beachland Park is designated as the town’s first dog park.

The fencing was installed Wednesday morning, Dec. 18, and at 2 p.m., the dog park opened.

Despite cold weather and the snowy/icy ground, many owners brought their dogs over for an inaugural romp, celebrating the park that has been a long time coming.

There were hundreds of “Likes” when the news of the park’s long-awaited opening was announced on the West Hartford Dog Park Coalition’s (WHDPC) Facebook page Wednesday afternoon.

The Town Plan and Zoning Commission held a public hearing Nov. 6 and unanimously approved use of the far northeastern corner of Beachland Park as a temporary dog park, from Dec. 15, 2019-March 15, 2020, but due to the weather the fence installation was delayed by a few days.

The area, measuring about three quarters of an acre, is situated along Trout Brook in an area largely hidden from view, past the soccer field, and far from the playground at the top of the hill.

“I’m very excited, everyone involved with the West Hartford Dog Park Coalition is very excited,” said Phil Karlin, who chairs the organization that has been trying to bring a dog park to town for the past decade. 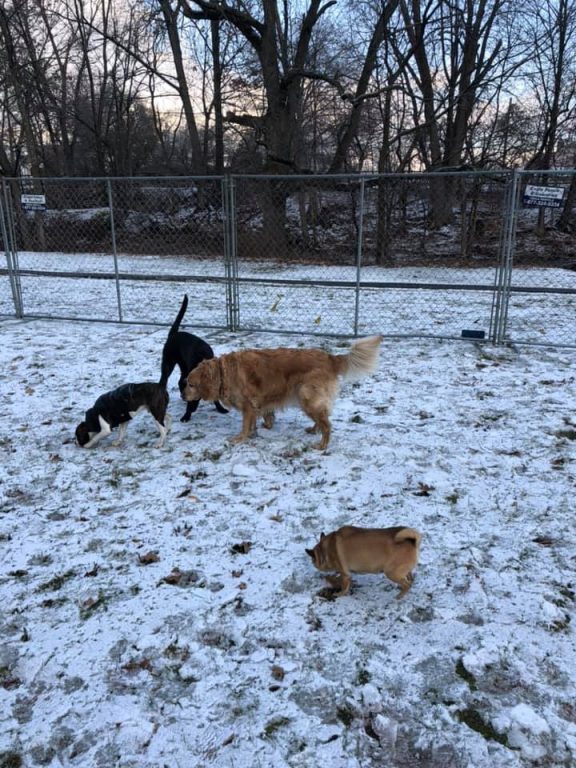 After numerous proposed locations for a dog park have been brought forward, studied, and dismissed for a variety of reasons, the town continues to work with the WHDPC on a permanent site, Karlin said, but that could still be a long way off.

After years of frustration and failed plans for other sites – Fernridge Park, land adjacent to the Home Depot parking lot, MDC Reservoir, and Trout Brook Drive near Whole Foods – the town worked with the WHDPC to develop site selection criteria.

Five years ago there was excitement among dog owners when a piece of land owned by the town, adjacent to Cornerstone Pool on a small slice of Buena Vista Golf Course, appeared to be an ideal dog park location. The idea was considered over the course of several months, but the Buena Vista Property Owners Association voiced strong objections, and hundreds of people signed petitions both against and in favor of the site.

“In the meantime, we’ve been doing 10 years of pooch plunges [as fundraisers for a dog park] and we have some money in the bank,” Karlin said. The funds were used to rent fencing for the temporary dog park, and will cover any other associated costs. 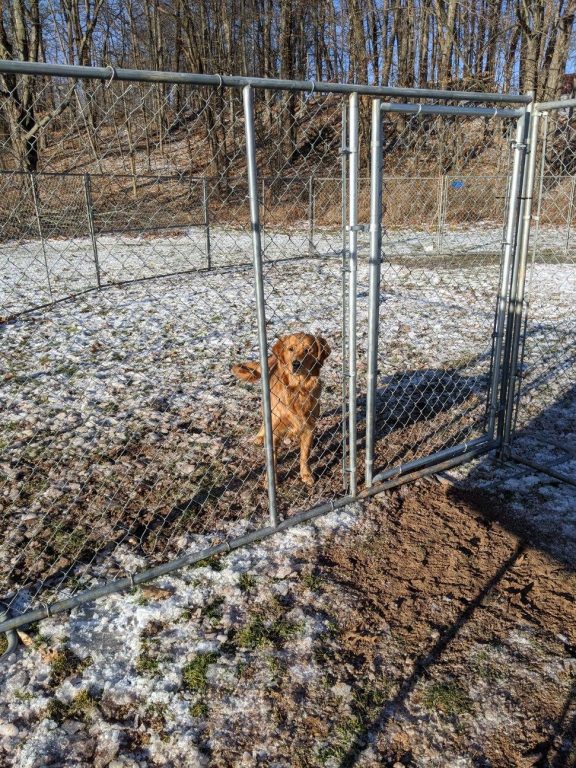 The Beachland Park site is not intended to be a permanent dog park, however, but is an ideal space during the winter months when the park is not otherwise very busy. And, said Karlin, it’s a spot that people often bring their dogs to play already.

“It will be fun, but also a chance for people to see what a dog park in action is like,” Karlin said after TPZ approved the plan. Within the town, the only example thus far has been the pop-up dog parks.

The application for the temporary dog park was filed by Leisure Services Manager Marc Blanchard, because it’s town-owned property, but he confirmed that would be essentially no impact to the town. The fencing will be removed “before the park needs to get set up for spring activities,” he said.

In 2016-17, the WHDPC held a series of pop-up dog parks on the ballfields of various town parks, and they were very successful from an attendance standpoint, but Blanchard said there was concern about damaging the fields. The upper part of Beachland was used for a pop-up dog park in February 2018, he said, but there weren’t any pop-ups last winter.

A three-month dog park should provide better data and a more realistic overview of what having a dog park in town will be like.

“We can talk to neighbors, ask them, ‘Is it horrible? Is it good?’” Karlin said. “The feedback will be based on reality, rather than fear. The town is thinking the same thing.”

“It will be a good learning opportunity for the town government as well as for residents to see how having a dog park for longer than a weekend works,” Blanchard said. “We know dog parks build community.”

In general, the town has been opposed to using existing parks like Beachland due to conflicts with sports, limited parking, and increased traffic. None of those problems exist in the winter, Karlin said.

“In the winter it’s low utilization of the parks and we know from doing the pop-ups that people will go,” said Karlin.

There are no expectations – on the part of the WHDPC or the town – that Beachland Park will become the site of a permanent dog park. “It’s an amenity, and we can try it out,” said Blanchard.

The site has a double-gate entry, a 6-foot fence, and a dispenser for extra “poop bags,” in case owners forget to bring their own, Karlin said. There are separate areas for large and small dogs.

The cost of renting the fence (which includes the installation and removal in March) is several thousand dollars, but all paid by the WHDPC, and other than perhaps emptying the trash barrel and doing some over-seeding of the grass in the spring, there will not be any additional costs incurred by the town.

As part of outreach efforts associated with the application, a mailing was sent to 35 abutting properties, and a meeting was held. No one attended, Karlin said. There were a few opinions shared at the TPZ hearing, and a few emails received with some mild objections, but nothing that prevented the unanimous approval.

The temporary dog park “would allow for maximum use out of our parks in town,” Blanchard said. There are about 50 parking spaces available at Beachland, and it’s far enough away from the playground so that should not be a concern for families, he said.

“Leisure Services feels strongly that maximizing the use of a town park in the winter months is a great option for this idea. This use will have little impact on other individuals who use the dog park during the winter months,” Blanchard said. 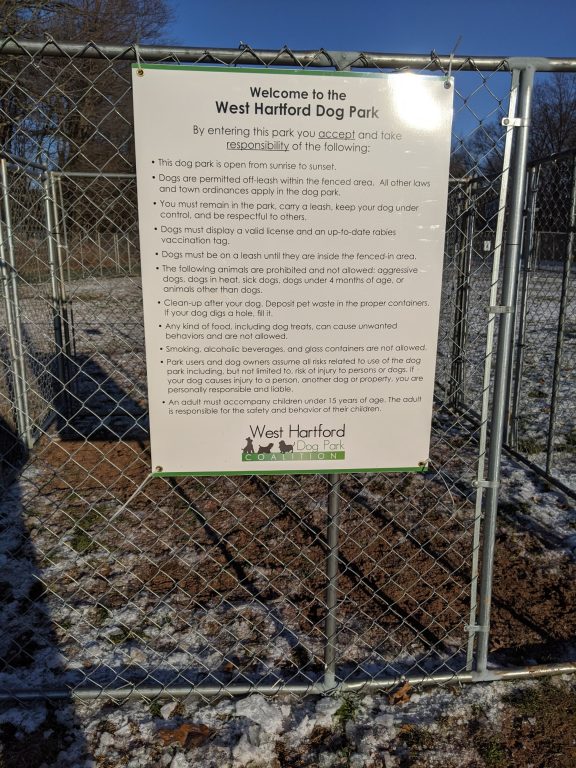 The dog park is now open from dawn to dusk. It will not be manned, but there is a sign indicating the rules – which are expected to be followed based on the honor system.

The rules include that dogs must be licensed and vaccinated for rabies, those who bring dogs to the park must remain with them and clean up after the dogs, food of any type is not permitted, and children under age 15 must be accompanied by an adult.

Dog Park users must park in designated parking areas, Blanchard said Wednesday, and should take care to dispose of trash in the centrally-located trash corrals.

TPZ set a limit that each adult user is limited to bringing three dogs to the park.

The parking situation, trash/recycling bins, and the condition of the fencing will be closely monitored during the duration of the park, Rubino-Turco said.

Rubino-Turco said that the duration of the temporary dog park is three months maximum, but the park could close earlier than March 15 depending on the weather. “If we need to remove it earlier we will, because it’s in a flood plain,” she said.

The town and the WHDPC are in agreement that while this is not a pilot, it will be an opportunity for all to learn what it will be like to have a dog park.

“This is something we can do in the meantime” while hoping that eventually a suitable site for a permanent dog park can be arranged, said Karlin.

“We really wanted to do something for the dogs of West Hartford,” Karlin said.