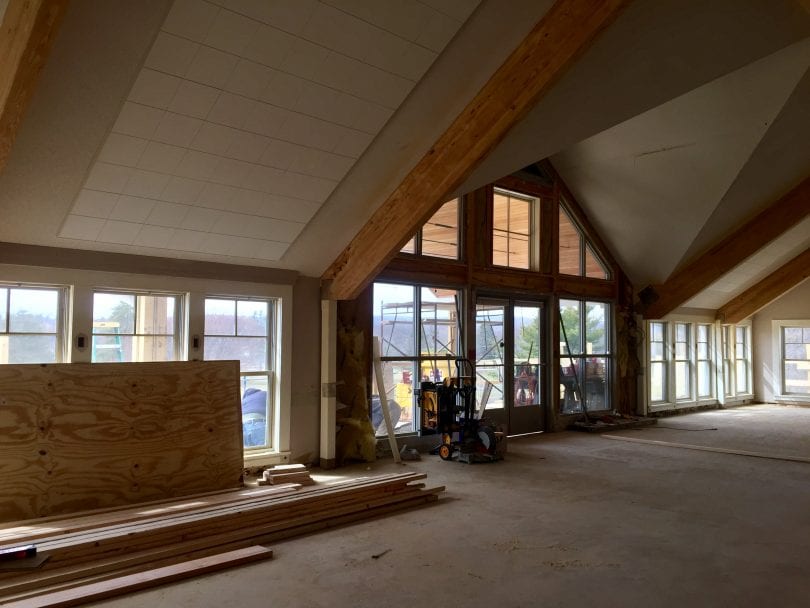 The West Hartford Town Council approved the lease for the new operator of the restaurant at Rockledge Golf  Club on Tuesday night, and renovation of the space is underway. 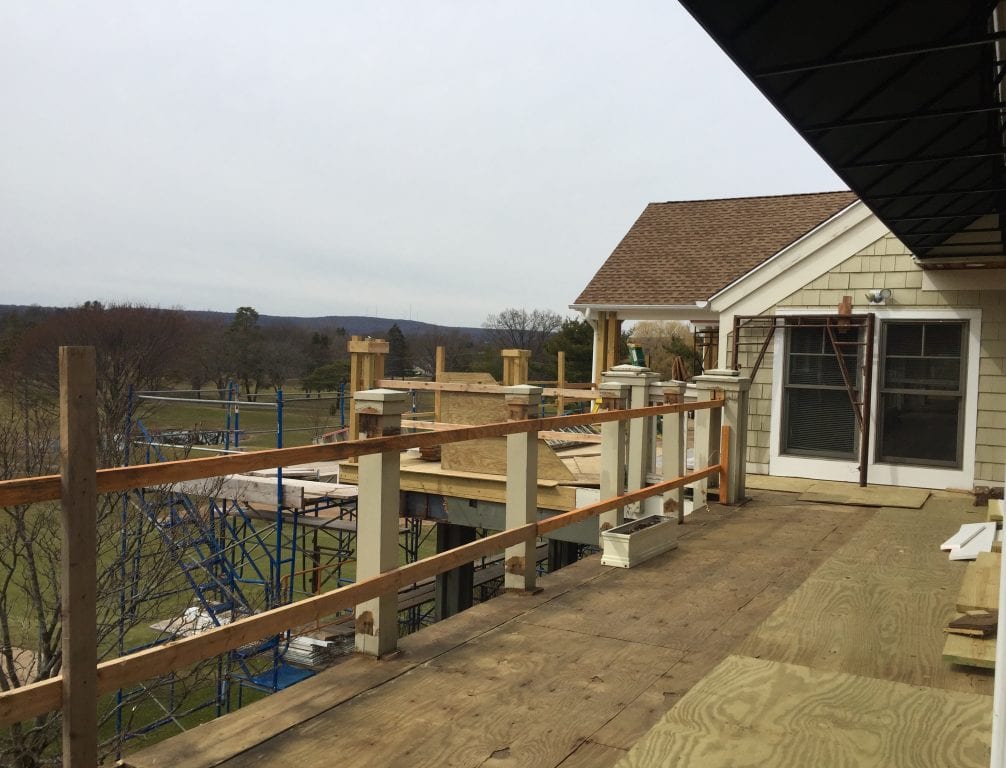 The deck of the restaurant at Rockledge Golf Club is being renovated and expanded. Photo credit: Ronni Newton

The new restaurant at Rockledge Golf Club, to be called the Rockledge Grille, will offer scratch-made casual American fare, served in the bright and airy dining room or on the expansive deck, both of which afford spectacular vistas of the golf course and the chance to witness spectacular sunsets.

If all goes according to schedule, Rockledge Grille will open on or around June 1, said Chip Kohn, owner of Beachland Group which has been awarded the contract to operate the restaurant as well as the snack bar and beer cart on the golf course. Kohn is also the owner of West Hartford’s popular Beachland Tavern on New Britain Avenue and Park Tavern on Park Road.

Kohn said that while the menu has not yet been set and must be approved by the town, the price point will be similar to Beachland Tavern and Park Tavern, as will be the scratch-cooking philosophy.

The interior is being completely renovated by Beachland Group, and work is already underway with the kitchen and dining area taken down to the studs. The airiness of the space is already apparent, after hours spent stripping paint to highlight the cedar cathedral ceilings and exposed beams in what was previously the main dining room as well as in the former tavern space.

The wall separating the rooms has been removed, opening up the space so it flows from one area to the other, but the space will remain flexible and able to be separated to accommodate private parties, Kohn said.

Rockledge Grille will also have a full bar.

Beachland Group is responsible for the interior renovations, which according to the lease are valued at $300,000, while the town is handling the renovations of the deck, Kohn said. Director of Leisure and Social Services Helen Rubino-Turco previously said that the renovation of the deck was required for safety and code reasons.

The deck, with a scenic view that will likely make it a prime place to dine on warm summer evenings, is being enlarged, and will have seating for 72 people, said Kohn. A portion will be enclosed, with a cedar ceiling the town has installed to match the style of the interior.

“We’re very excited to get this open,” Kohn said Tuesday. “We’re excited to have a good relationship with the golfers are well as the community.”

Because Rockledge Grille is located in a residential zone and operates under a special use permit, Kohn said that hours are somewhat more restrictive than restaurant hours in commercial zones. The deck will need to close by 9:30 p.m., and the restaurant will stop serving at 11 p.m. Any desired changes to those hours will need to be made through the zoning process, and will not be able to happen until next year at the earliest, Kohn said.

On Tuesday night, the Town Council formally approved the lease for the space, for an initial period running from Jan. 1, 2018, through Dec. 31, 2025, at a cost of $5,000 per month and increasing by $100 per month each January. There is an option for three additional five-year renewals.

In addition, the profit-sharing component of the agreement states that Beachland Group will pay the town the equivalent of 6 percent of net annual sales between $1 million and $2 million for the initial term of the lease.

Angelo’s on Main, the previous restaurant, closed on Dec. 23, 2017. The lease was up and owner Angelo Chirico retired and moved to South Carolina.

Following an RFP process, the bid was awarded to Beachland Group in late 2017. 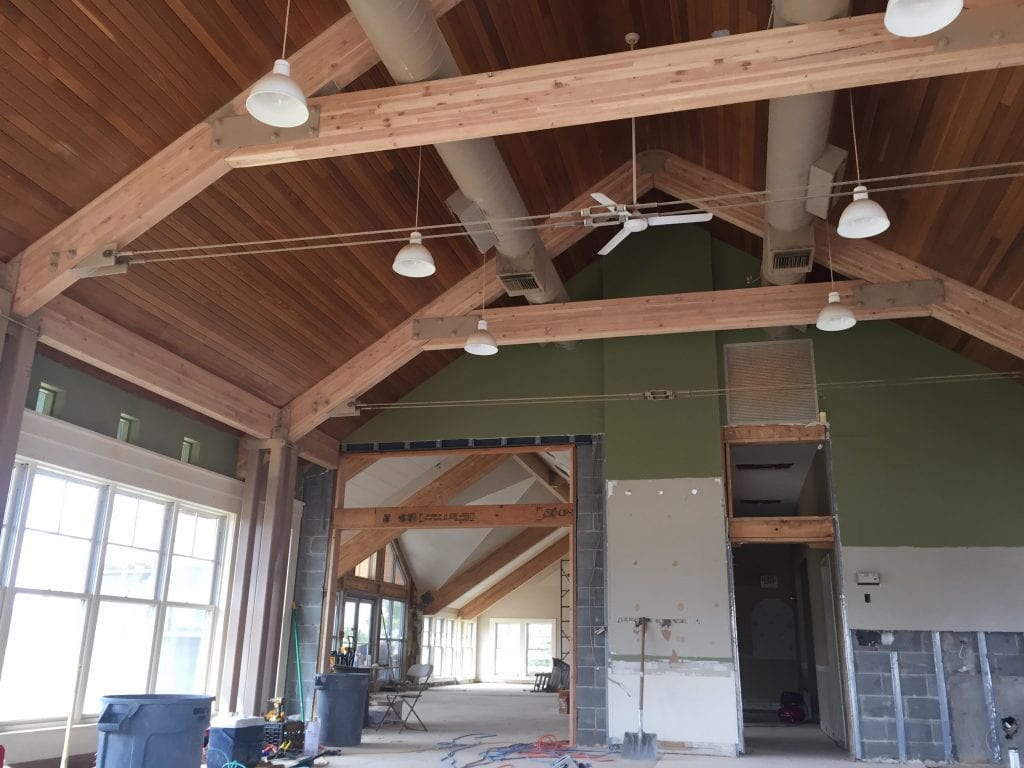 The paint has been stripped to expose the beams to expose the orignal wood, creating a light and airy feel. A wall leading to the main dining room has also been opened up. Photo credit: Ronni Newton 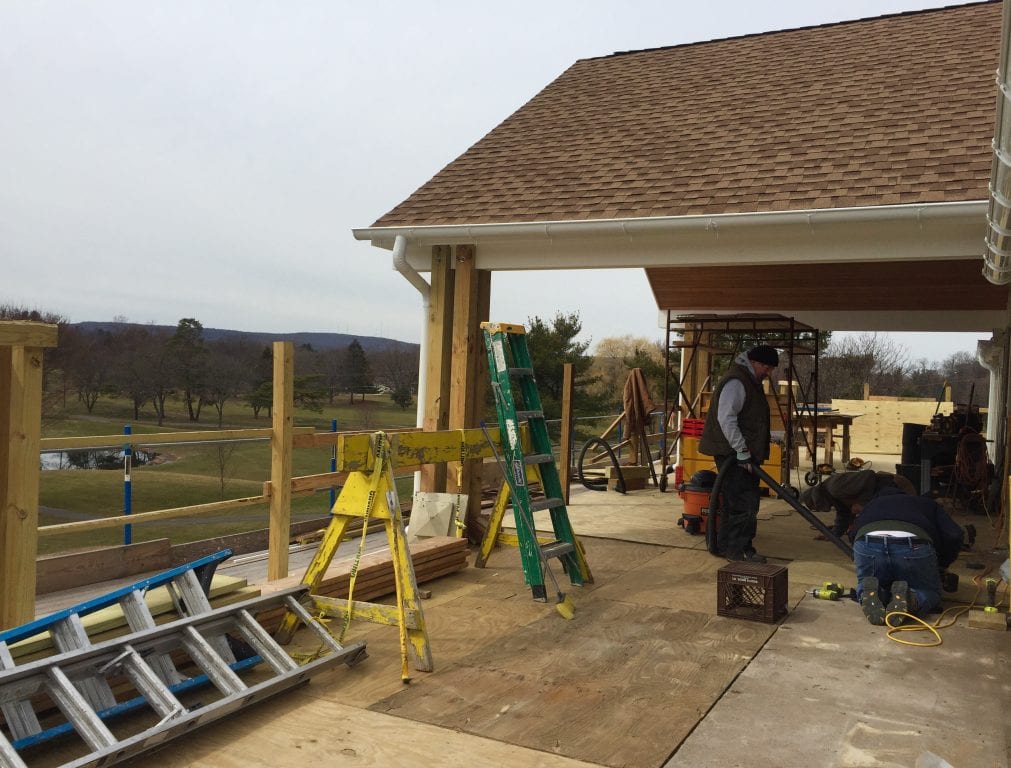 A portion of the deck at Rockledge Grille will be enclosed, and the overall deck space will seat 72 people. Photo credit: Ronni Newton 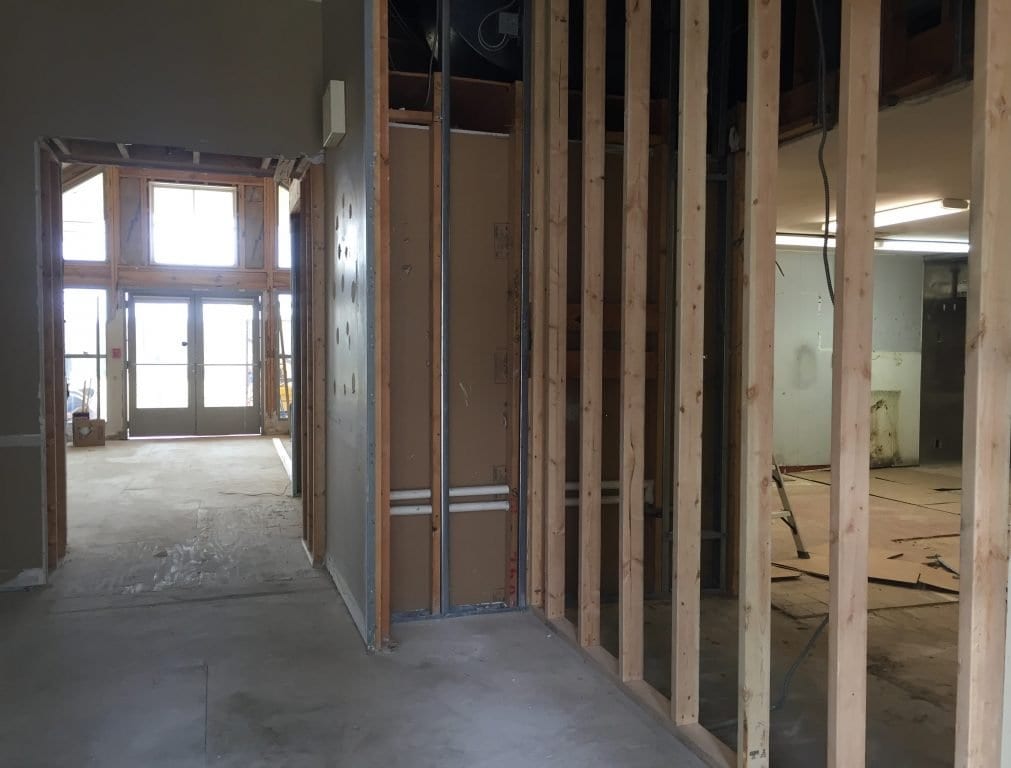 The space is gutted and renovations are underway at Rockledge Grille, the restaurant soon to open at Rockledge Golf Club. Photo credit: Ronni Newton