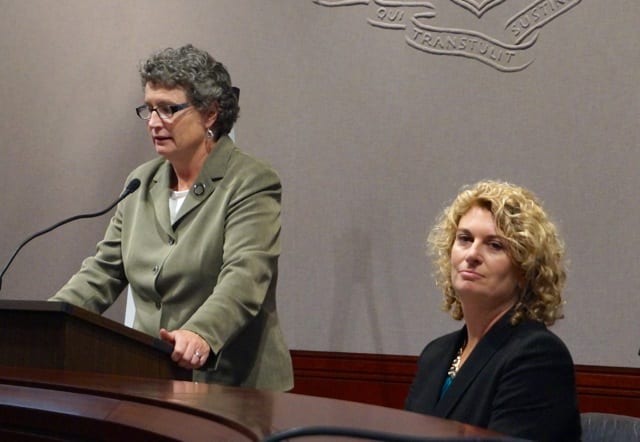 Officials from West Hartford, Stamford, and New Haven announced Monday that they have issued a joint Request for Qualifications (RFQ) to bring ultra-high-speed Gigabit networks to Connecticut. 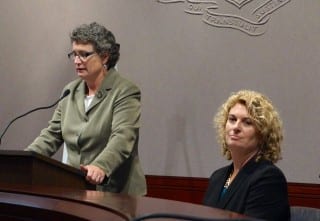 The three mayors have issued a joint RFQ to interested parties to “gather ideas and recommendations for developing, upgrading, and expanding broadband infrastructure and improving access to high-speed Internet across their communities.”

Most home and many business Internet connections currently operate at an average speed of 9 megabits per second (Mbps), but a Gig network can operate at speeds of up to 1,000 Mbps – more than 100 times faster.

“Inspiration doesn’t come 9 to 5. People want the ability to send and receive large packages of data; it’s an essential tool,” said Blair Levin, executive director of Gig.U and author of the National Broadband Plan. Levin, who advised Connecticut’s Office of Consumer Counsel in the development of this project, spoke at Monday’s announcement. “We want to eliminate broadband as a restraint to human innovation,” he said.

The Office of Consumer Counsel represents consumers on issues reated to energy, natural gas, water, and telecommunications. Consumer Counsel Katz, who is a West Hartford resident, has conducted focus groups in conjunction with the Connecticut Technology Council to determine interest in Gig networks. “What we found is that there is a need for cheaper, easier access to ultra-high-speed internet access,” she said.

Google Fiber held a competition in 2010 to develop a Gig network, and Kansas City was ultimately chosen as the winner, Katz said. (West Hartford was one of the municipalities that applied.) Since then several other cities have developed Gig networks, but none in Connecticut. The only high speed networks in New England are in Maine and Vermont.

“We want to put Connecticut on those maps,” she said. “Internet access is now a necessity; it’s like electricity.”

Mayor Harp said that ultra-high-speed Internet service is something we need to move forward, and once developed “transmission of so much information will glide almost effortlessly around Connecticut and beyond.”

Deputy Mayor Cantor said, “West Hartford is a thriving community that is comfortable being a leader in the state and the region. We understand that we need to pursue the highway of the future, high-speed Internet, to position our community and our state to compete nationally and globally and remain a top-ranked community to live, work, and play.”

Several business leaders from around the state also spoke at the announcement, expressing their enthusiasm for the proposal. Dr. Yu-Hui Rogers, site director for Jackson Laboratories in Farmington, said, “We would like to see the progress of science and medicine being limited only by our intellectual capacity and imagination, not by the speed and volume with which we exchange and share our data and ideas.”

Other business leaders said that they hope to achieve improved work/life balance for their employees through better and more reliable access to data and services from outside the office, as well as a reduction in the cost of Internet service.

State Sen. Bye said that Connecticut currently has one of the best regulatory environments to make this happen. Two years ago, she helped lead a legislative initiative to allow the municipal use of utility poles for purposes such as the construction of high-speed networks.

Following the announcement, West Hartford Town Manager Ron Van Winkle said, “This is the future – we know it’s the future.” 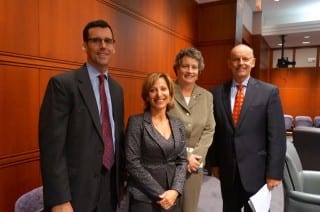 West Hartford is already wired with 35 miles of high-quality fiber optic cable acquired several years ago from Arnold Chase’s former cable business, and it is currently being used for municipal purposes. “We are hoping to leverage that to attract businesses,” Van Winkle said. Increased competition will also positively affect the cost of Internet service, he said.

This RFQ is unique in that it provides “open access,” allowing other municipalities to join, Katz said. The West Hartford, New Haven, and Stamford mayors hope other towns and cities will join the effort.

One of the primary goals of the RFQ is create a Gig network in “targeted commercial corridors – as well as in residential areas with demonstrated demand – in order to foster innovation, drive job creation and stimulate economic growth.”

Another major goal of the RFQ is to create competition and decrease the cost of Internet service.