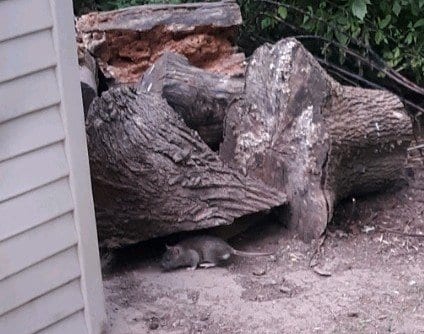 Linda Franco provided this photo of a rat in the backyard of her Fox Meadow Lane home in June. The playhouse and wood pile have since been removed. Courtesy photo

Residents of an area of West Hartford near Trout Brook have reported seeing rats in their yards and near the brook, prompting one U.S. Post Office carrier to refuse to deliver mail at the front doors, and a pest management company is now in the process of completing an investigation on behalf of the town. 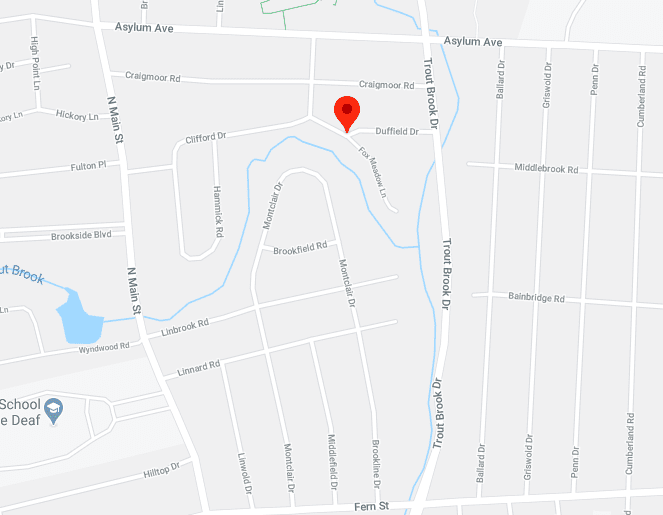 Map shows Trout Brook, and the streets surrounding it, east of North Main Street, south of Asylum Avenue, and west of Trout Brook Drive, where residents have reported rodent activity.

The West Hartford-Bloomfield Health District has continued to receive complaints of rodent activity in an area of town near Asylum Avenue, Trout Brook Drive, and North Main Street, and while evidence of rats was not found on the former UConn campus, a pest management company is conducting a thorough survey of areas where rats have reportedly been seen.

“We had received complaints of rodents, and a lot of people thought it was coming from [the former] UConn [campus], but we had two people inspect and they found no evidence of rats, no burrow holes,” Aimee Krauss, director of the West Hartford-Bloomfield Health District told We-Ha.com.

The grass on the former campus had grown very tall, and some residents thought perhaps it could be a habitat for rats and other vermin, but after negotiating a first right of refusal contract for the property with current owner Ideanomics/Fintech Village, West Hartford’s Department of Public Works had the property mowed by an outside contractor.

According to Town Manager Matt Hart, after the grass was cut there was still no visible evidence of rats.

The town has not denied the existence of the rats, and is actively trying to determine the source of the rodent problem both Hart and Krauss said.

The Health District and Engineering Departments are involved, and are taking a look at the construction projects in town, including the work nearby on the North Main Street Bridge that crosses Trout Brook, as well as Metropolitan District Commission projects in the area. Hart said they are anxious to hear what the report from the pest company investigation indicates.

In June, most of the complaints about rats were from residents in the Fox Meadow Lane area – across Asylum Avenue south of the former campus property – but recently many complaints are also coming from those who live on the other side of Trout Brook Drive, in the “horseshoe” neighborhood that includes Montclair Drive and Brookline Drive, streets which back up to Trout Brook.

On Fox Meadow Lane, some residents even received a letter from the U.S. Postal Service indicating that the carrier would not be delivering mail due to the “rodent issues within the area” unless their mailboxes, which are typically at the front door, were moved to the curb so the carrier can remain in the vehicle.

An employee at the Shield Street branch, which is West Hartford’s main post office, would not specify how many residences are impacted but confirmed that some people had been asked to put their mailboxes at the curb. Otherwise they would need to meet the carrier at the truck or pick up their mail at Shield Street, he said.

Several Fox Meadow Lane homes, near where the road dead ends at Trout Brook, now have placed their mailboxes at the curb. 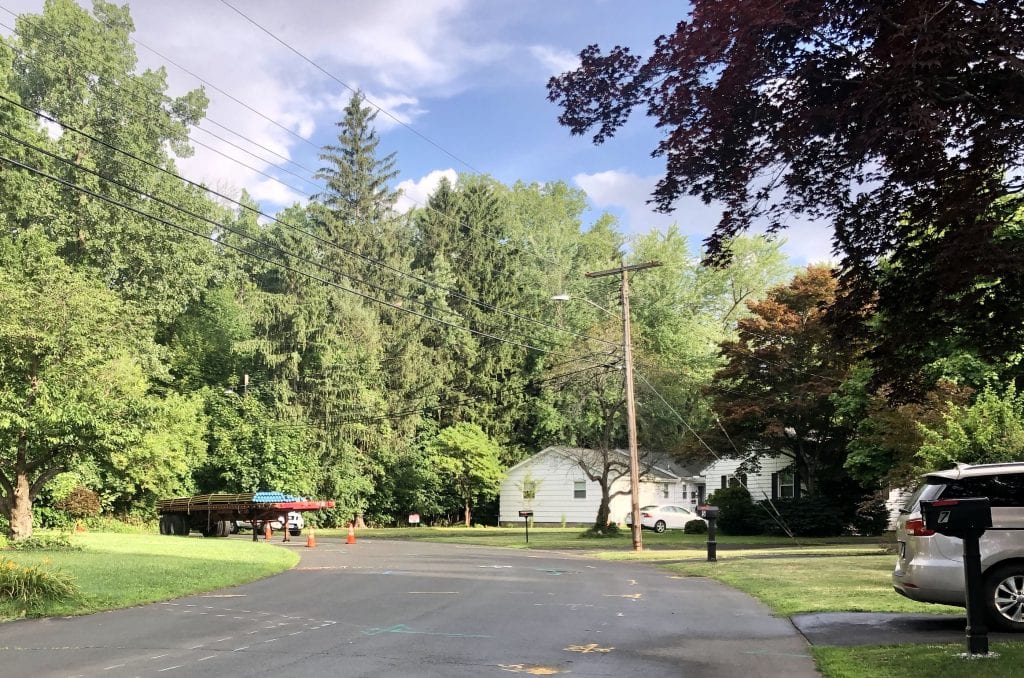 Mailboxes have been moved to posts at the curb at some Fox Meadow Lane homes, so residents can continue to get their mail delivered. Photo credit: Ronni Newton

“It comes down to the safety of our carriers,” the postal employee, who did not provide his name, told We-Ha.com.

“The town has become aware of this issue and we have actively engaged pest control experts to identify the source and potential remedies,” Mayor Shari Cantor said. “I recognize that this is a difficult and challenging situation and we are working together to assist in a solution.”

A resident of the horseshoe neighborhood, who did not want to be named, said some people have reported seeing rats, including some swimming in Trout Brook, and are “in a panic.”

Some Montclair Drive backyards are not very deep, and Trout Brook is clearly visible.

The horseshoe neighborhood residents said the health department has suggested the rats may have been there all along, but now that people are home more due to the pandemic they see them because they are spending more time in their yards.

Some residents think the rats could have relocated when the pond on Wyndwood Road, near the bridge construction, was recently drained.

Krauss said staff informed residents of some of the ways to determine the existence of rats: dark brownish-black droppings that are rice-shaped and measure roughly 1-inch by 1/4-inch, gnaw marks, running tracks, and burrows. Staff discussed mitigation strategies such as ensuring no garbage is left outside, food scraps are kept out of compost bins, and dog feces are picked up, and bird seed is removed.

Those who see rats on their property are also encouraged to hire a licensed pest removal contractor, she said.

A letter was sent last week to about 300 in the area, Krauss said, in order to reach out to a large circumference of the area and get an idea of the breadth of the issue.

Krauss said that the letter (see copy of sample letter in PDF form below) provides the following information: “We are encouraging residents if they observe rodent activity and feel that they have a rodent problem on their property to take the following rodent control measures: Keep all garbage in covered, tight fitting containers. Do not leave food out for rodents, do not feed the birds. Please do not add food wastes to compost piles and do not leave pet food outside in containers that can be chewed. If you have a pet please remove their waste as frequently as possible. Check to make sure your house, garage tool shed are rodent-proof. Seal deteriorated concrete gaps, holes etc. Use metal screening to protect vents or other openings. Remove any hiding places from your property by eliminating the clutter in your yard, garage, or shed. Remove fallen fruits or nuts from your yard. If you have a garden, remove vegetables as soon as they have ripened. Cut back any overgrown vegetation and keep shrubs trimmed along fences and your home.”

Krauss said that following an initial visit by Health District inspectors, some residents received notices of violation – conditions on their property that could attract rodents, such as food and shelter. Those residents are given a certain number of days to comply with requests to mitigate the conditions, and will be visited again by inspectors.

Those who do set their own traps are given a list of precautions.

Linda Franco lives on Fox Meadow Lane and had contacted the Health District in the spring when she saw at least 20 rats in her yard on a regular basis.

She said she received a letter from the town, with suggestions about mitigating the rat problem.

“I think people should look for an alternative to poison,” Franco said, and she purchased ultrasonic rat repellers from Cleanrth and also followed the company’s recommendation that she place cotton soaked in peppermint oil in the rat holes.

Some of her neighbors used poison to get rid of the rats, Franco said, and several weeks ago she said she saw a group of rats feasting in her neighbor’s yard on what she thought was another animal that had been poisoned. 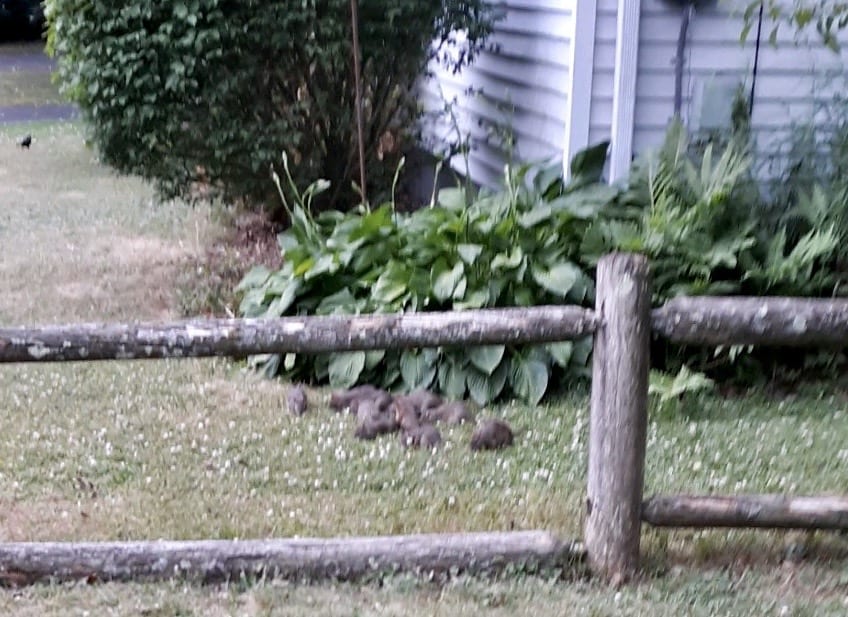 Rats huddled around what Fox Meadow Lane resident said was a dead animal in a neighbor’s yard. Photo courtesy of Linda Franco

“All of our rats here have completely disappeared,” Franco said. She personally credits the ultrasonic repeller and the other recommendations she received from Cleanrth. “I’m happy to get my yard back.”

Franco said that one time she walked out her door and stepped on a rat, and she was the person who suggested to the post office that residents in that area place their mailboxes at the road. 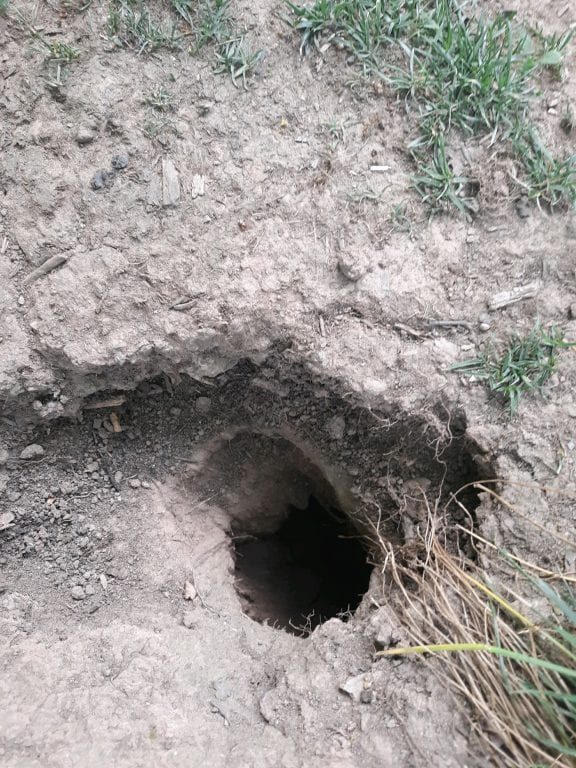 Linda Franco had multiple rat holes in her backyard, but the rats have now moved on, she said. Photo courtesy of Linda Franco

“I think it’s a combination of everything,” Krauss said of the increased sightings of rats, including the bridge construction, people being home more and generating more waste, and maybe even the mild winter.

Hart said the town has not received recent reports of rats being seen in other parts of town, but Minority Leader Lee Gold said that when he was campaigning late last summer and early in the fall, residents at the Alfred E. Plant development on Farmington Avenue at Whiting Lane told him that rats were “out and about” in their backyard, and it was one of their chief issues.

“I’m definitely concerned about the rodent issues and it needs to be addressed to protect the health and safety of West Hartford residents,” Gold said.

“The town will move forward based on the results,” Hart said of the pest company’s report. “Let’s see what the recommendations are. We want to be proactive.”