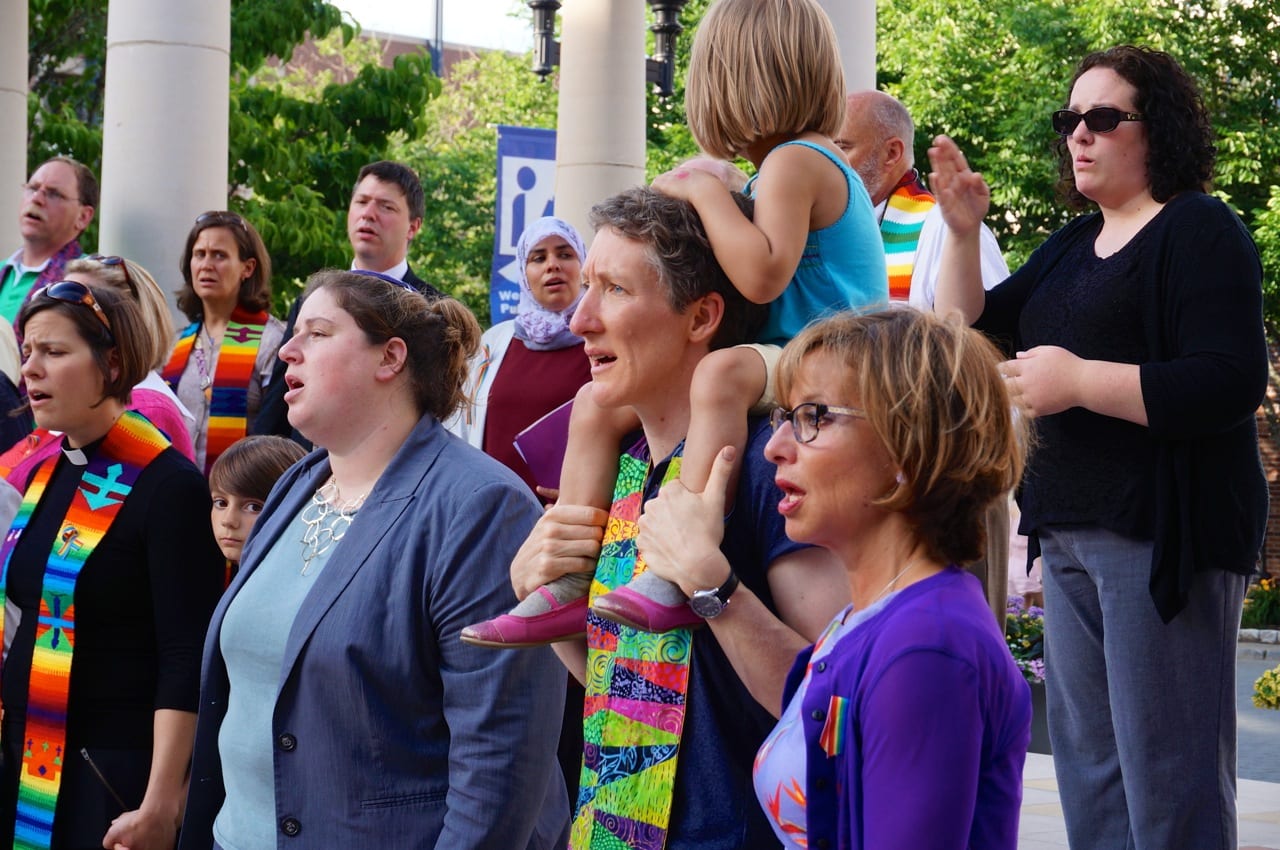 The West Hartford community held a vigil Wednesday evening in a show of solidarity for the victims of Sunday’s shooting in Orlando. 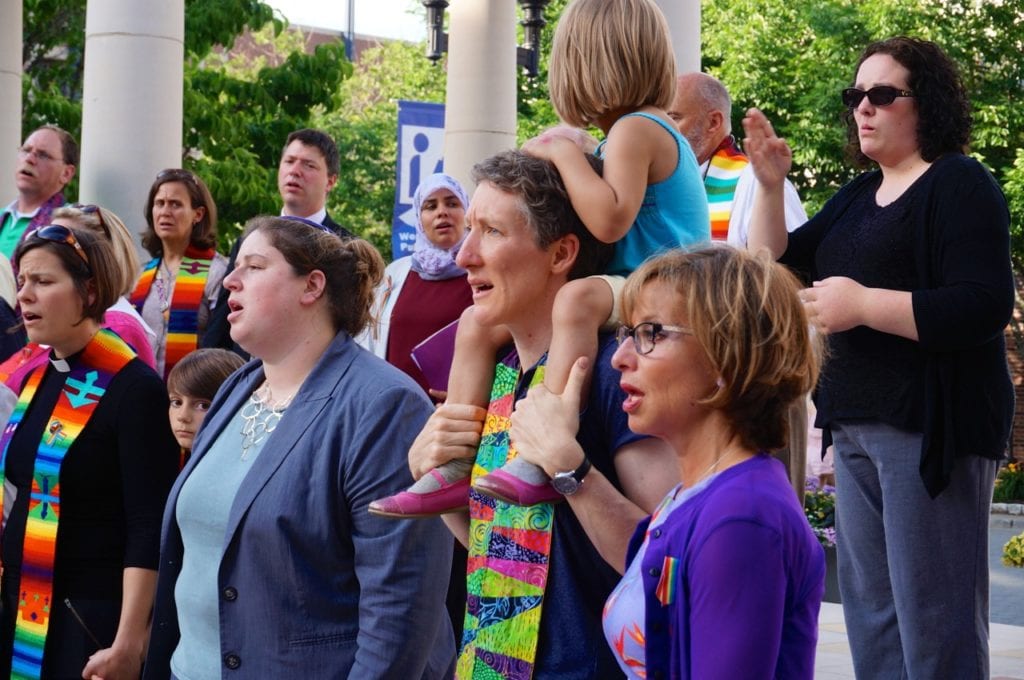 About 300 people, many with rainbow ribbons pinned to their shirts, gathered together in the courtyard of Blue Back Square Wednesday evening to listen, sing, and pray with a diverse group of area clergy representing Christians, Jews, and Muslims.

Young and old, gay and straight, the community reached out, took each others’ hands, exchanged hugs, and stood in solidarity to honor the 49 victims who lost their lives and those who were injured in the shooting at the Pulse nightclub in Orlando, and the LGBT community as a whole.

At 6 p.m., the somber beating of a drum immediately brought a hush to the crowd.

“I’m so sad for the tragic reason that we are gathering here,” Mayor Shari Cantor said. “We are here to mourn and to think about the worst attack on citizens since 9/11 and the deadliest single shooting in U.S. history.”

Cantor said that she was very grateful to the community and to the faith leaders, for organizing the vigil.

“We are inspired by the outreach and support throughout the Orlando community, the nation … from rainbow flags and mile-long lines to donate blood. We stand in solidarity with the LGBT community and we denounce hatred and bigotry,” Cantor said.

Rev. Stacy Emerson, of the First Baptist Church in West Hartford offered a prayer to express grief, and to stand with the victims, and for those in the LGBT community who are “living a nightmare too terrible to describe.”

Today’s raw emotions, Emerson said, must be transformed “into a caring that grinds hatred to a halt with a bold and daring justice.”

“The tragedy of Sunday is a reminder that we are not all together,” Rabbi Pincus said, “or at least there are some individuals in the world who strive to divide us.” But the presence of everyone at the vigil is an affirmation that we are together, he said. “Let us stand as one community across the nation that rejects senseless murder.”

Aida Monsoor, president of the Muslim Coalition of Connecticut, said, “Islam does not allow the killing of innocent civilians. We would like to express our sorrow and solidarity with all Americans, in particular with the LBGT community in mourning this tragic loss of life.”

“I pray that we continue to stand together and support one another … that our love and respect grow exponentially as we end bigotry and hatred with that love and respect,” Monsoor said.

Campbell asked those gathered to reach out and hold hands, as a moment of silence was observed.

Music was a large part of the vigil as well, as Rev. Mark Diters of Flagg Road Unitarian Universalist Church played the guitar and led the crowd in a group singing of Pete Seegar’s iconic folk song “Where Have All the Flowers Gone.”

“I’d like to do something a little bit risky right now,” Rev. Cathy Rion Starr of the Unitarian Society of Hartford said as she stepped down from the stage and joined the crowd in the courtyard. The openly-gay minister invited her “queer siblings, my gay siblings … however you might identify” to come on into the center, including kids who might not yet know what they are.

Dozens joined in a circle, held hands, and listened as she read the words of George Arnett, a young, black, gay writer. Starr said that the words – some of which were profane – are not the words she usually uses in public, but she felt they needed to be said. “Don’t let anyone tell you what to do right now or how to do it … terrorism is meant to keep you in fear and make you shrink away … heal as we’ve healed for generations.”

State Sen. Beth Bye took the stage next, thanking everyone for support. Asking the crowd once again to hold hands, she said there are gatherings like this going on throughout the state, throughout the country, “because we as a people are saying that love is stronger than hate.”

“Love is stronger than hate,” chanted the crowd several times.

What people should do, Bye suggested, is do what Beth Kerrigan did when gay people didn’t have the right to get married. “She put it all on the line for us,” Bye said. The Kerrigan v. Connecticut case legalized gay marriage in the state. “You need to take it to the courts, take it to the state capitol, take it to the U.S. capitol,” Bye said.

“That terrorist put terror in everyone,” Bye said. “Thank you, you’re amazing and thank you for being here tonight,” Bye told the crowd.

“We Shall Overcome,” sang the crowd.

“Hang out and visit, hug, touch, but commit yourselves for a new tomorrow,” Campbell said as the vigil concluded.

“When I heard about this, I just knew I had to be here and show support,” said 17-year-old Paige Pierce, a rising senior at Conard High School who is part of the Unitarian Universalist Church’s Social Justice team.

“We have made so much progress,” Pierce said, but then something like Orlando happens. “It’s like taking one step forward and 10 steps back,” she said.

“I needed to be here,” said West Hartford resident Kim Green, who was born and raised in Orlando. “It’s so terrible for our kids to experience, that there’s nothing safe.”

“We have an amazing community,” Cantor said after the vigil. The gathering she said, was “all about support, helping each other heal.” 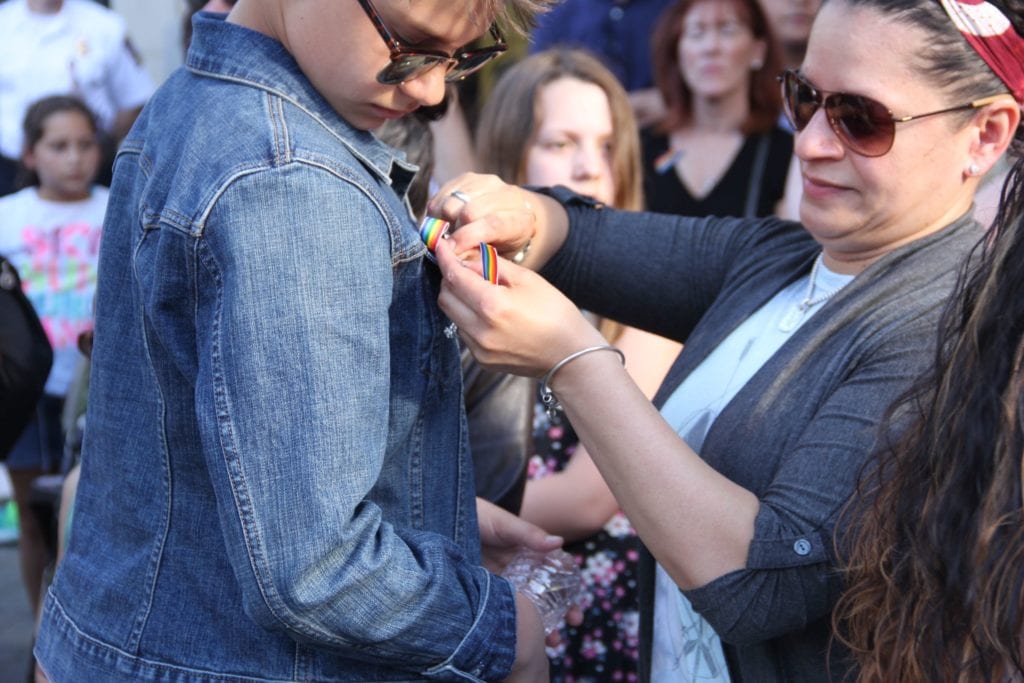 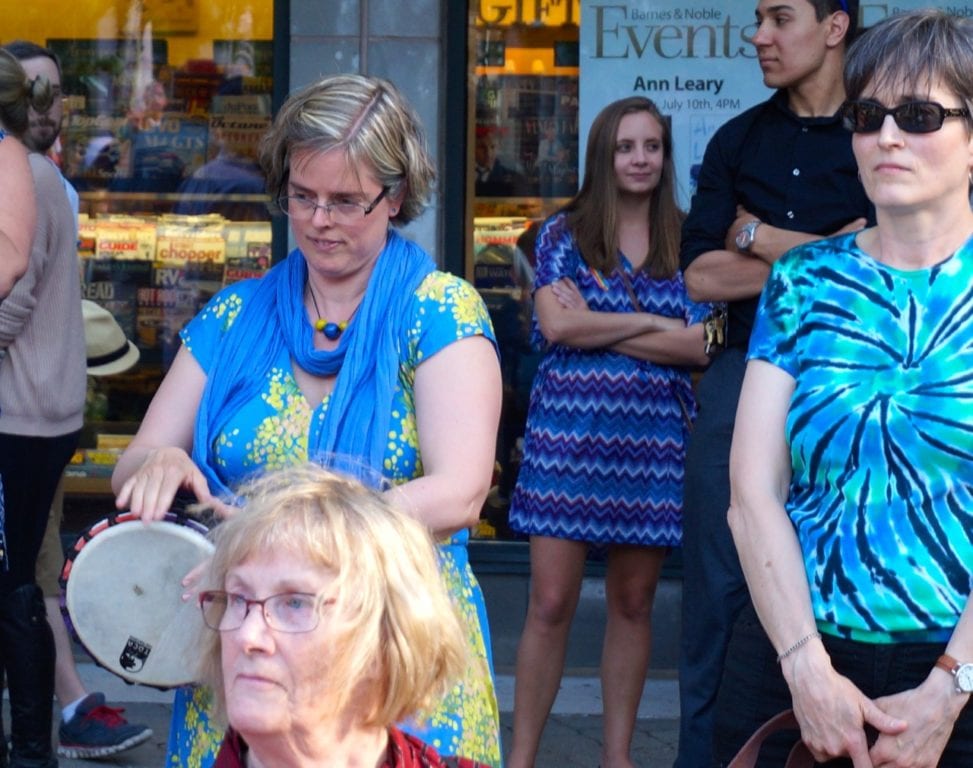 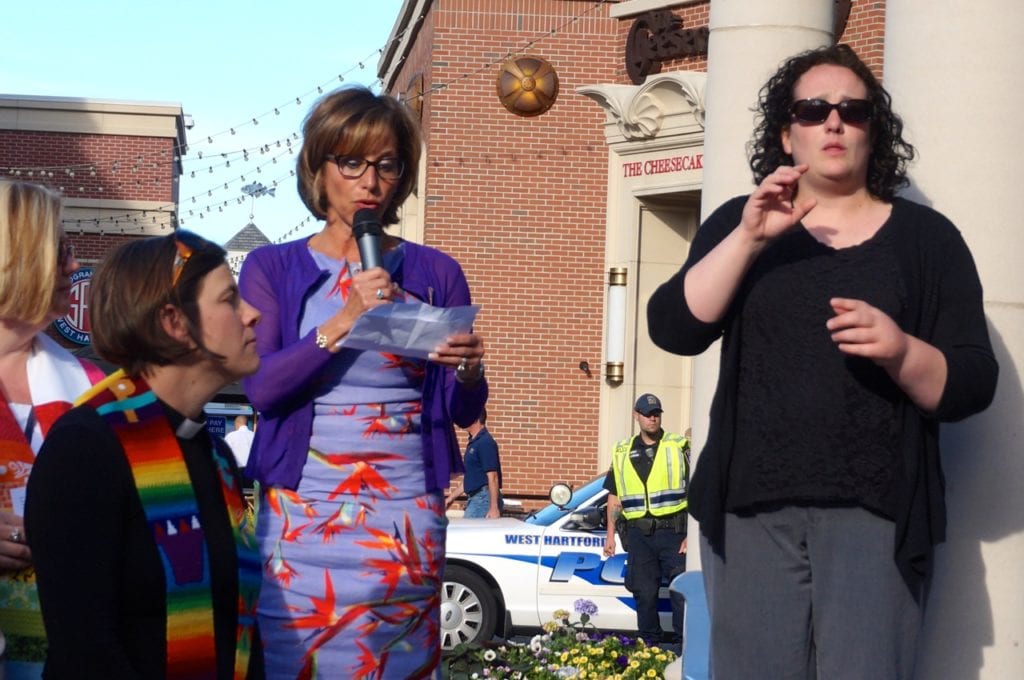 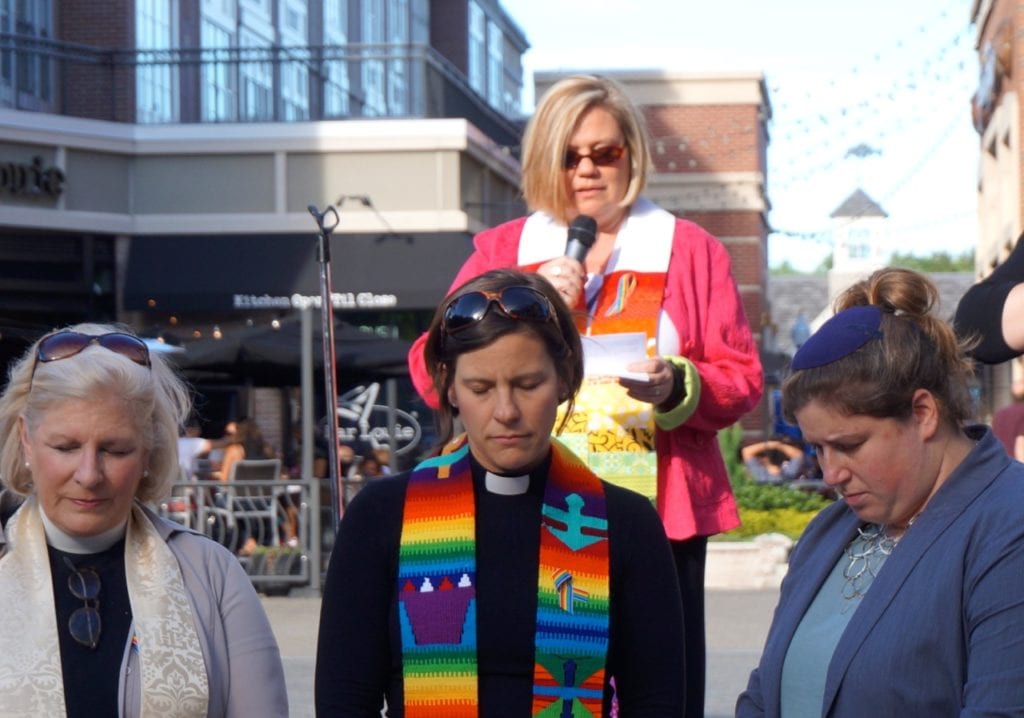 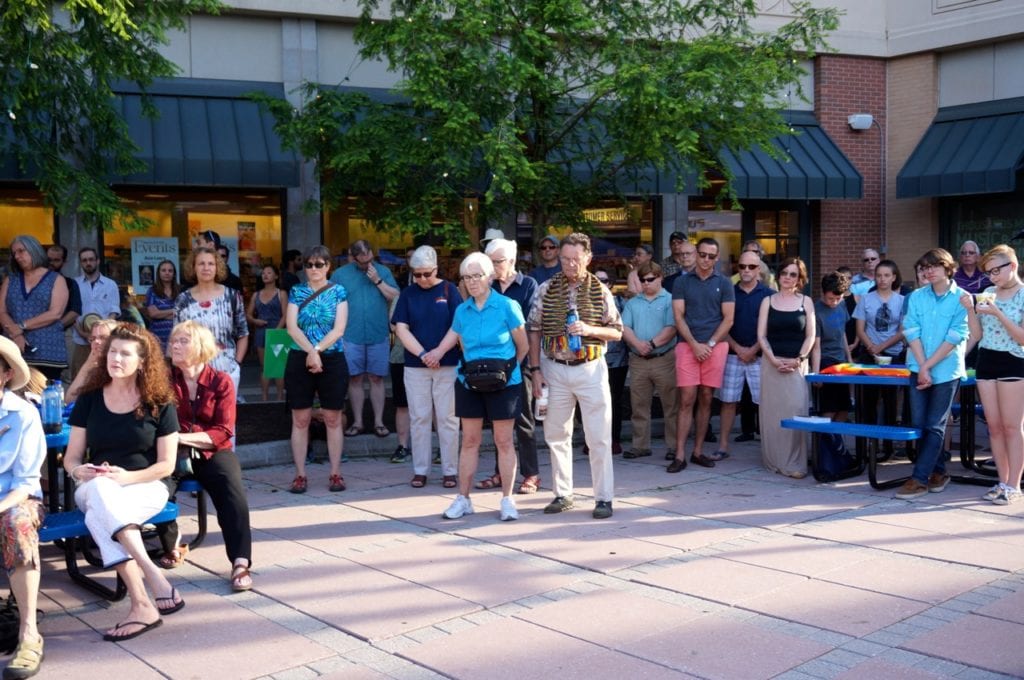 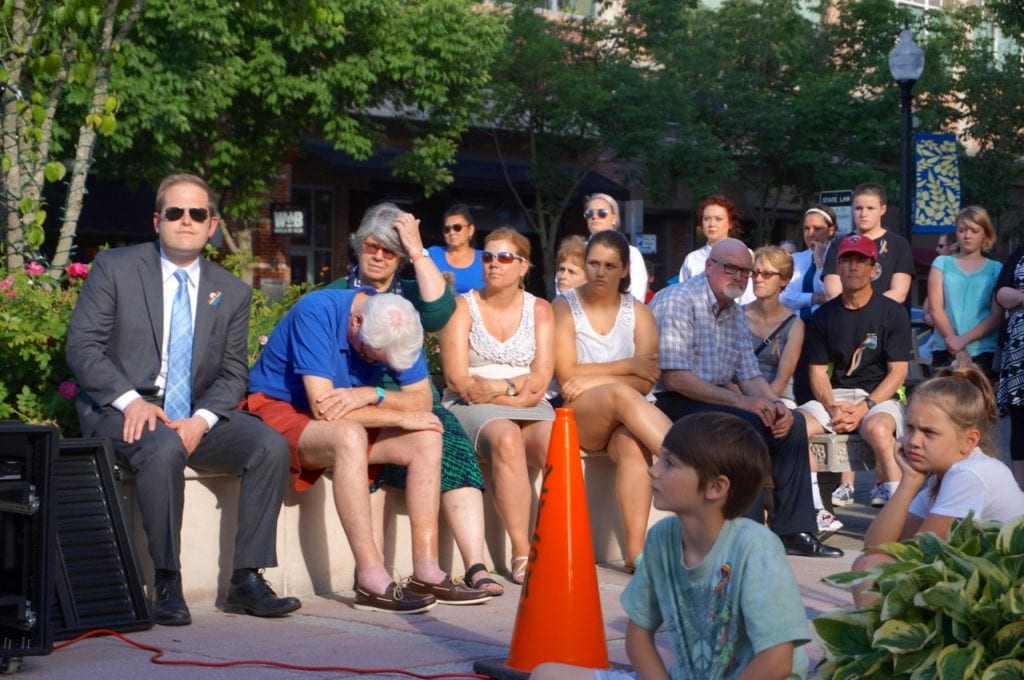 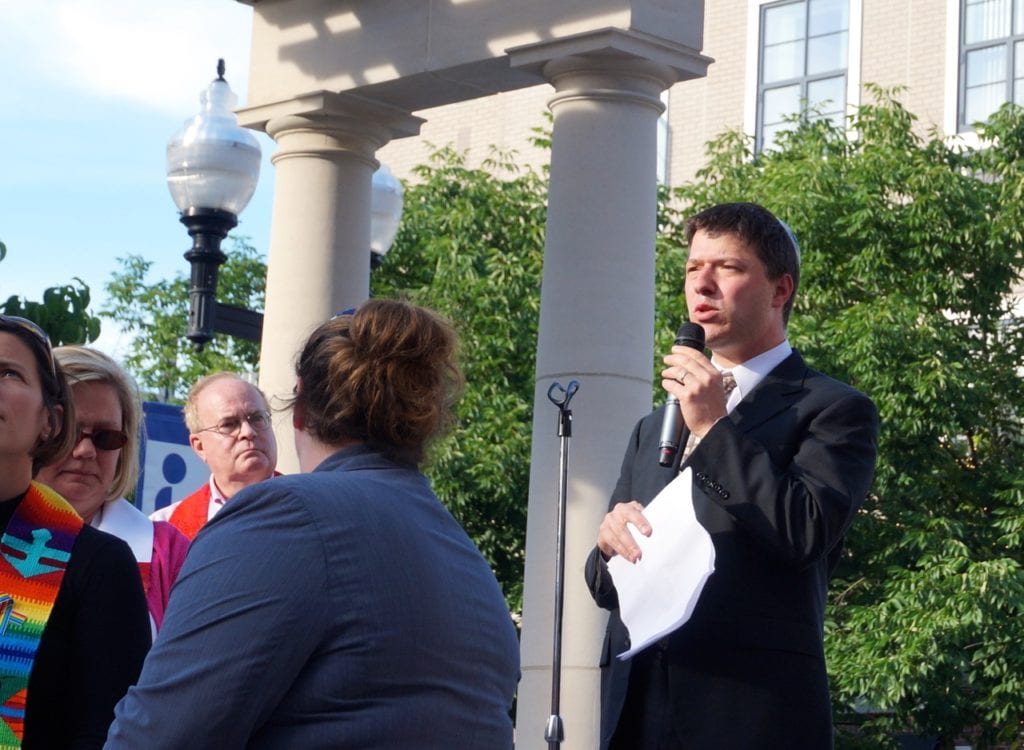 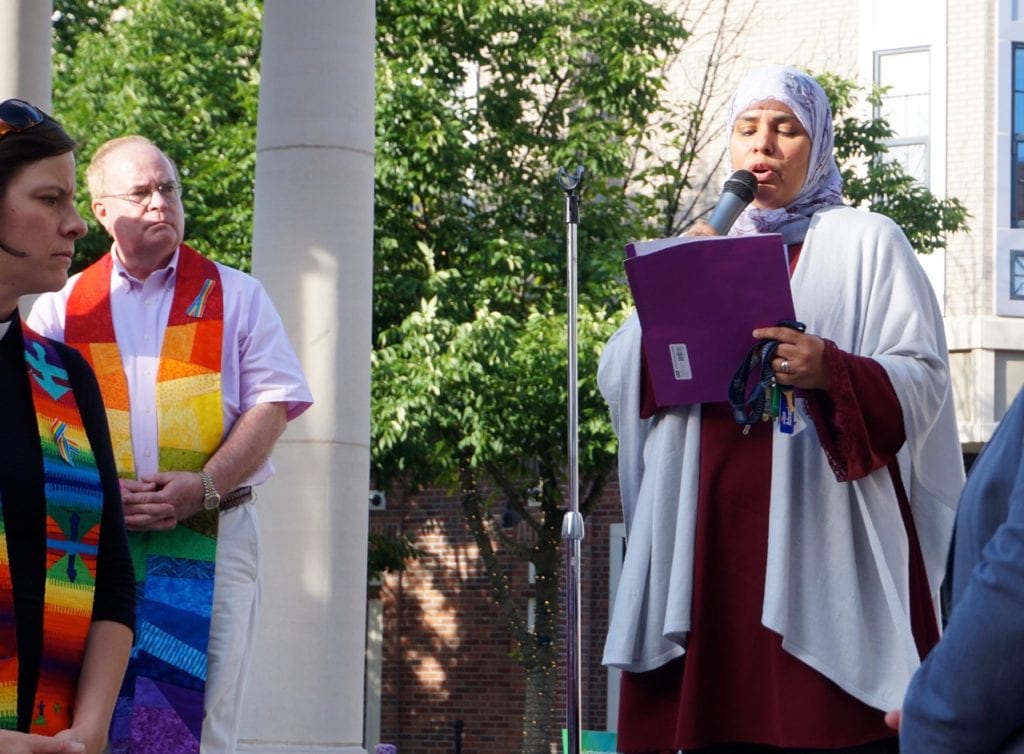 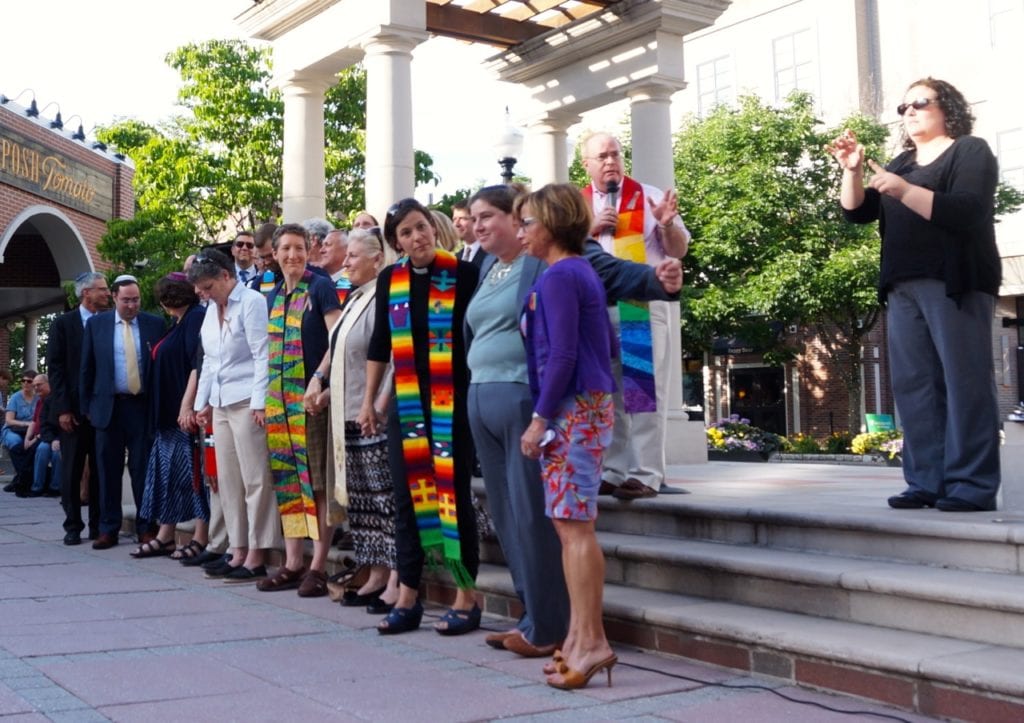 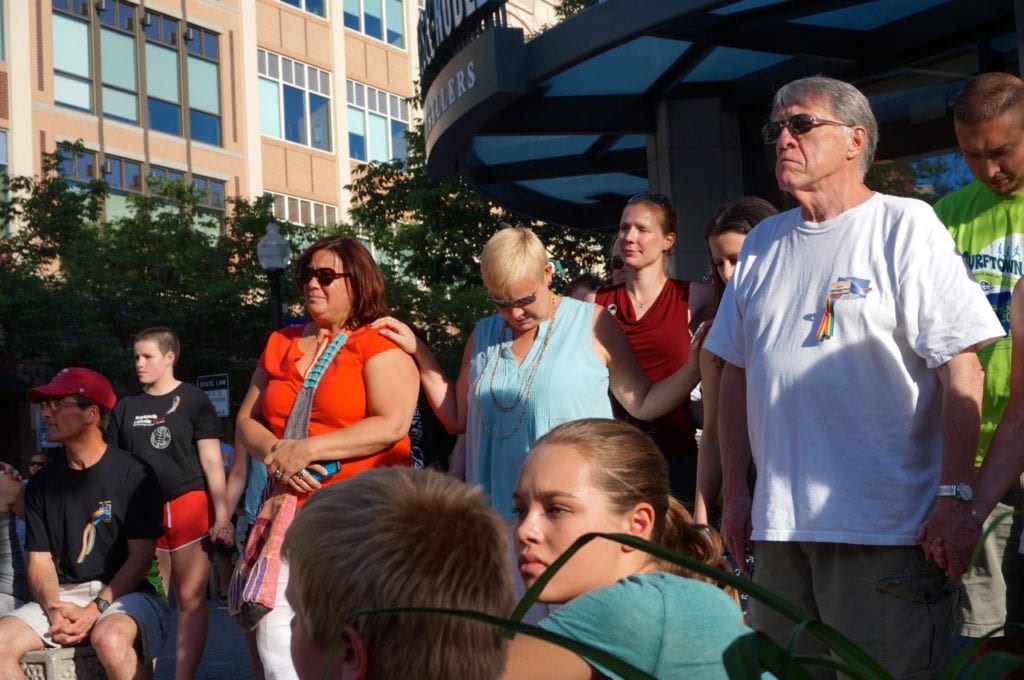 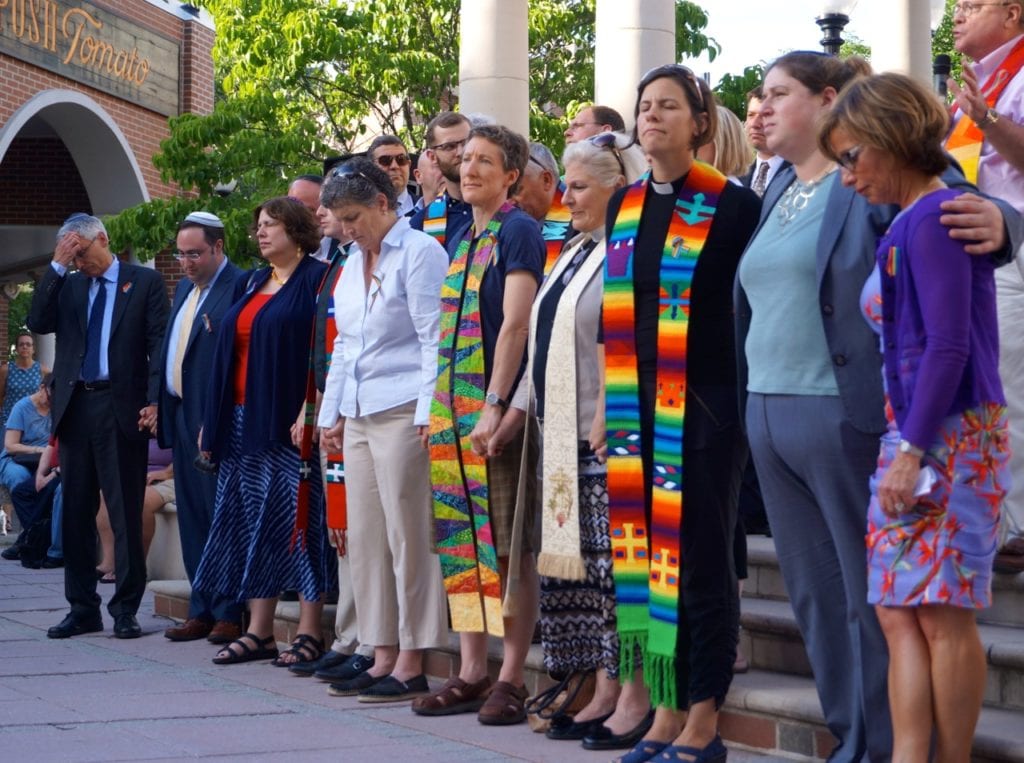 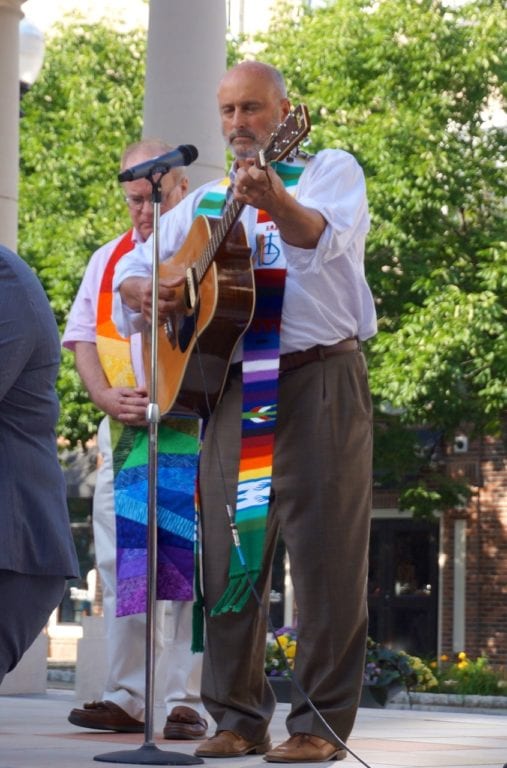 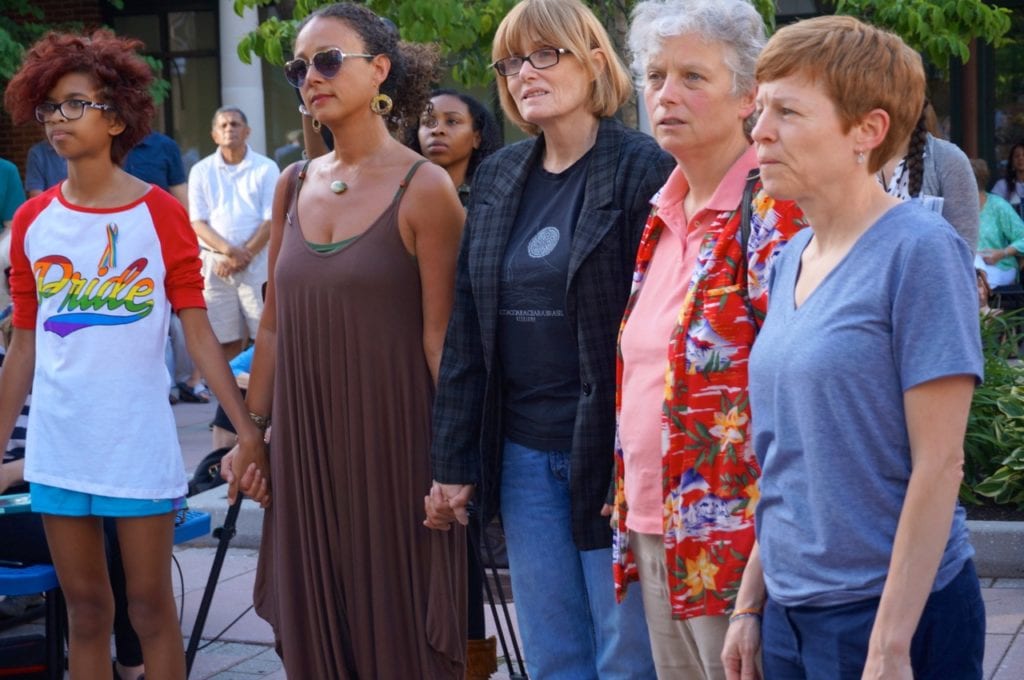 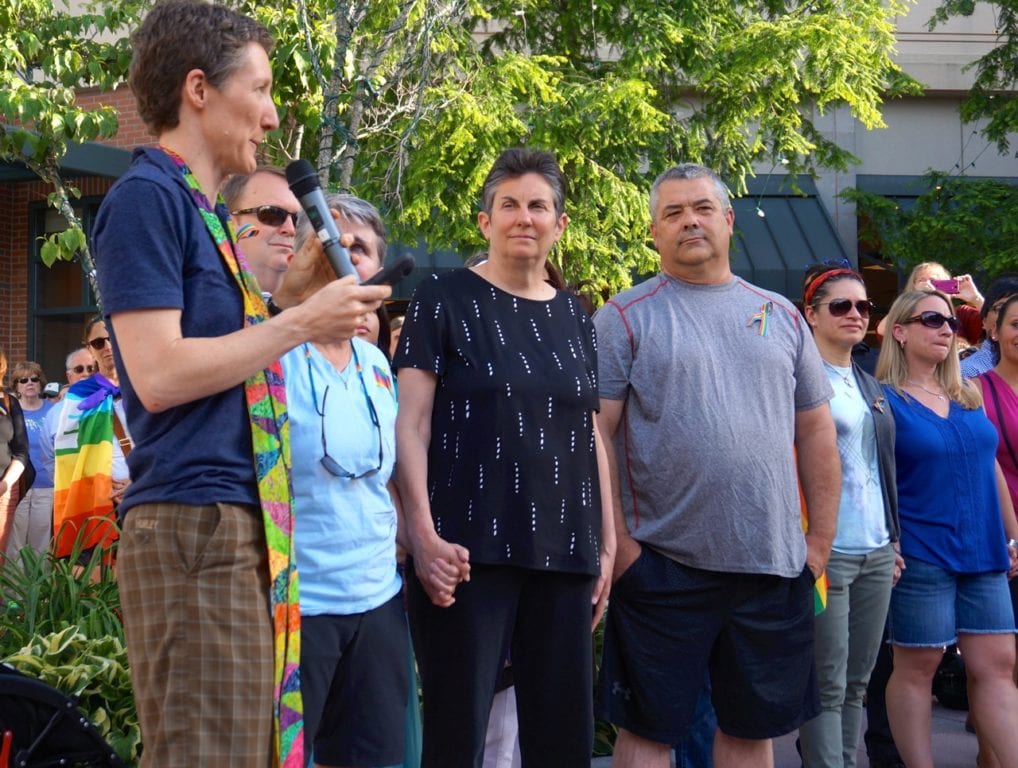 Cathy Rion Starr (left) of the Unitarian Society of Hartford speaks directly to those who came forward as members of the LGBT community. Vigil, June 15, 2016. Photo credit: Ronni Newton 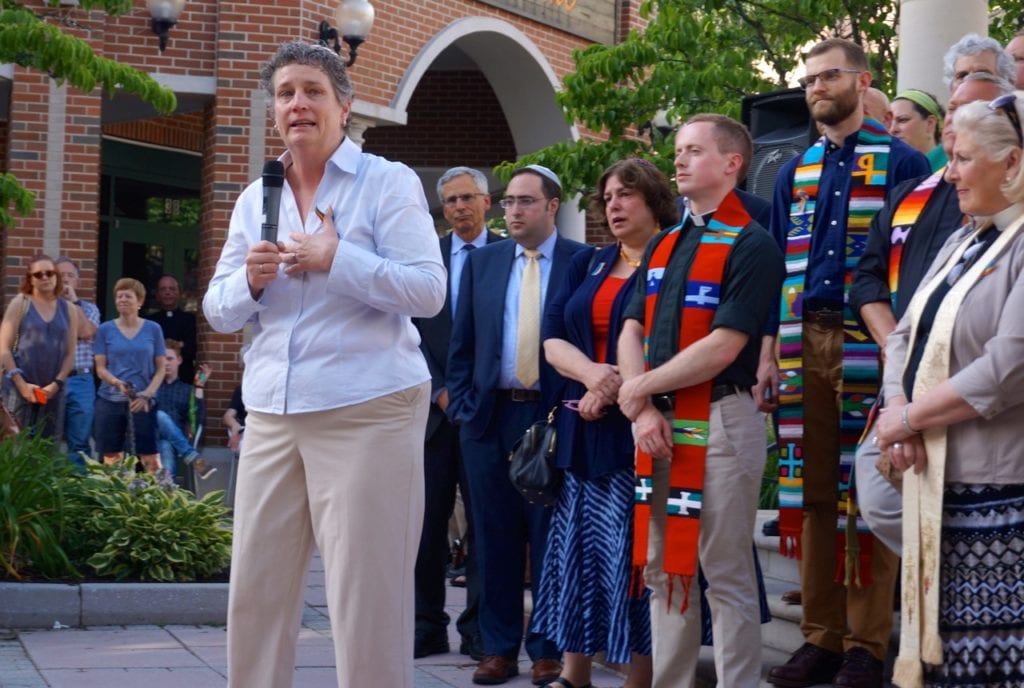 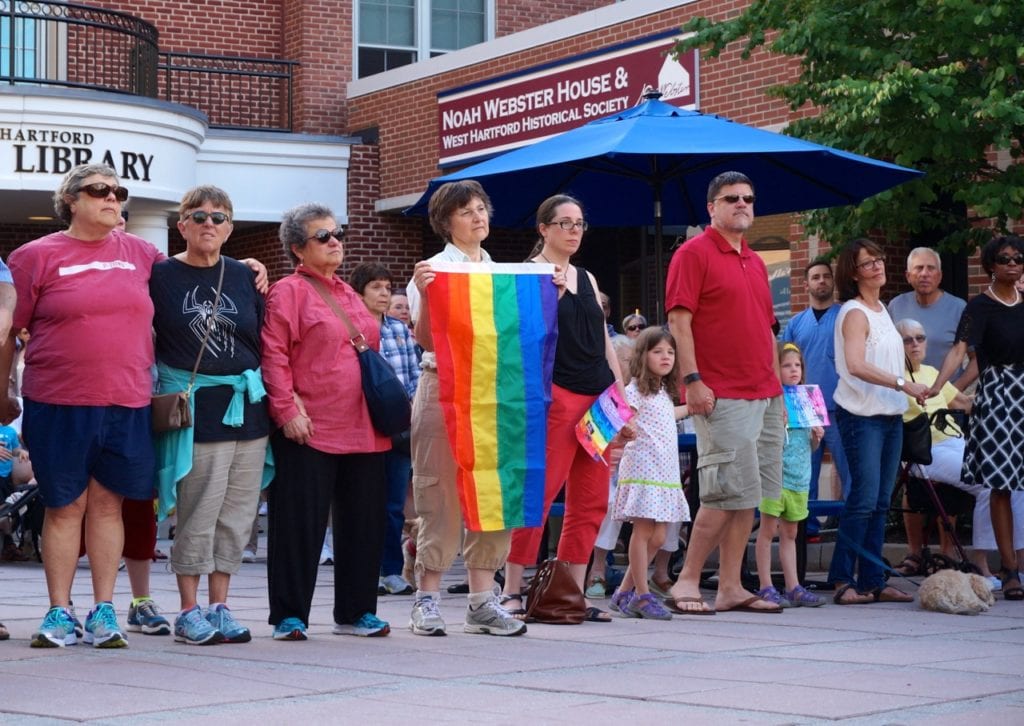 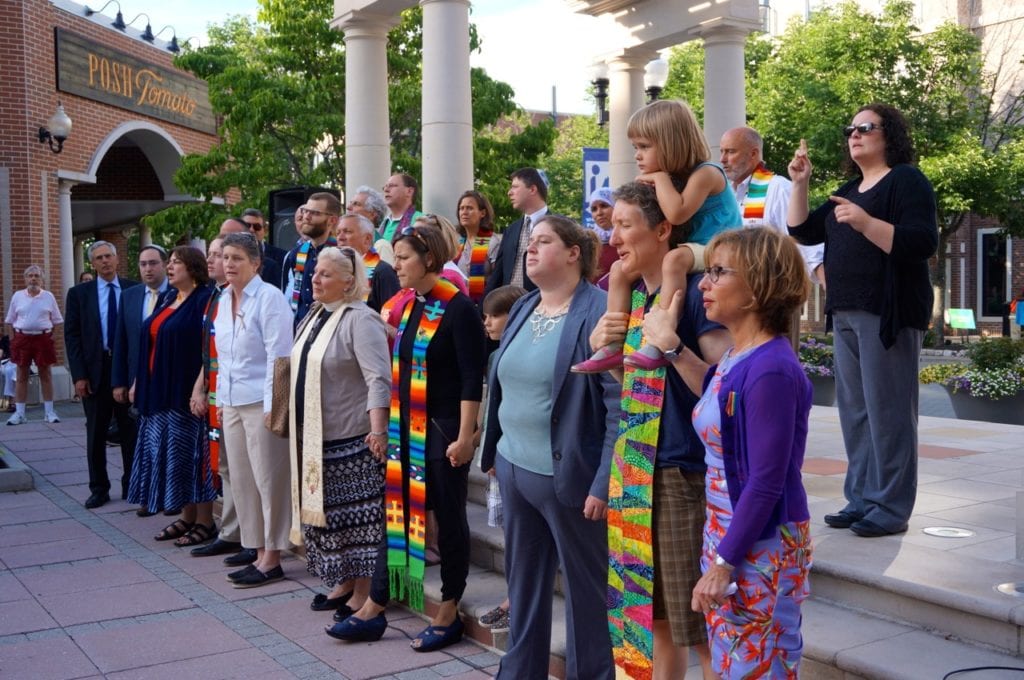 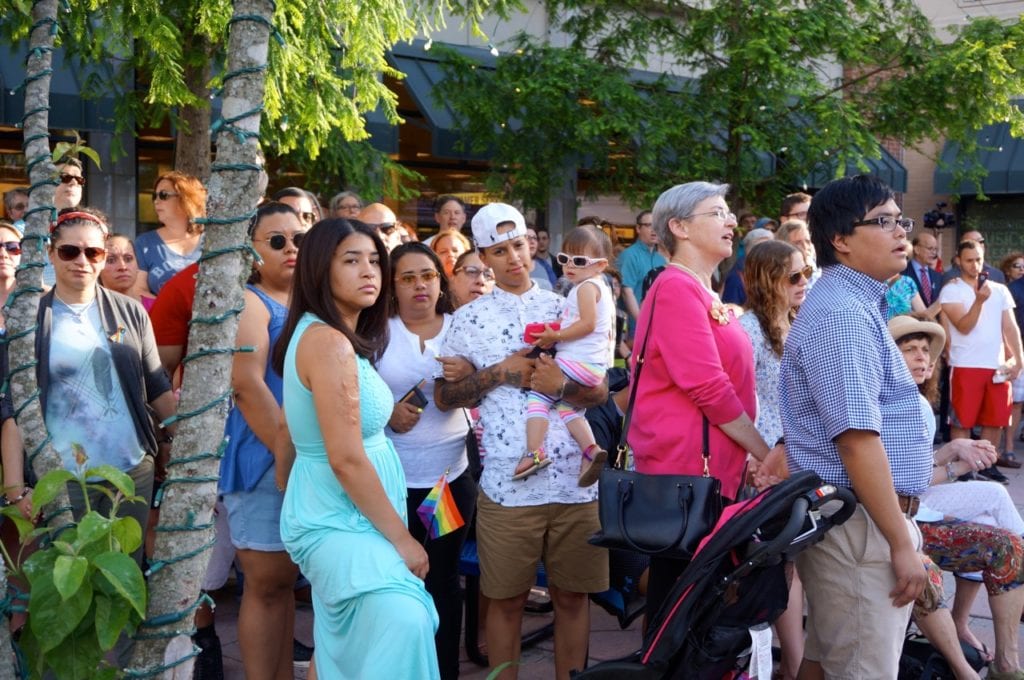 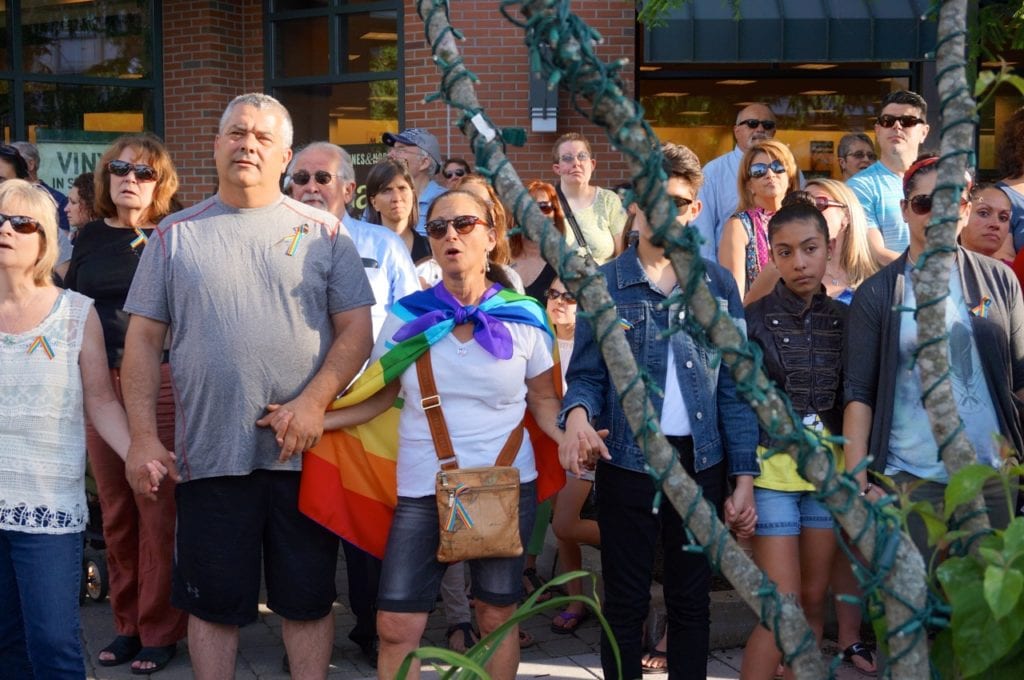 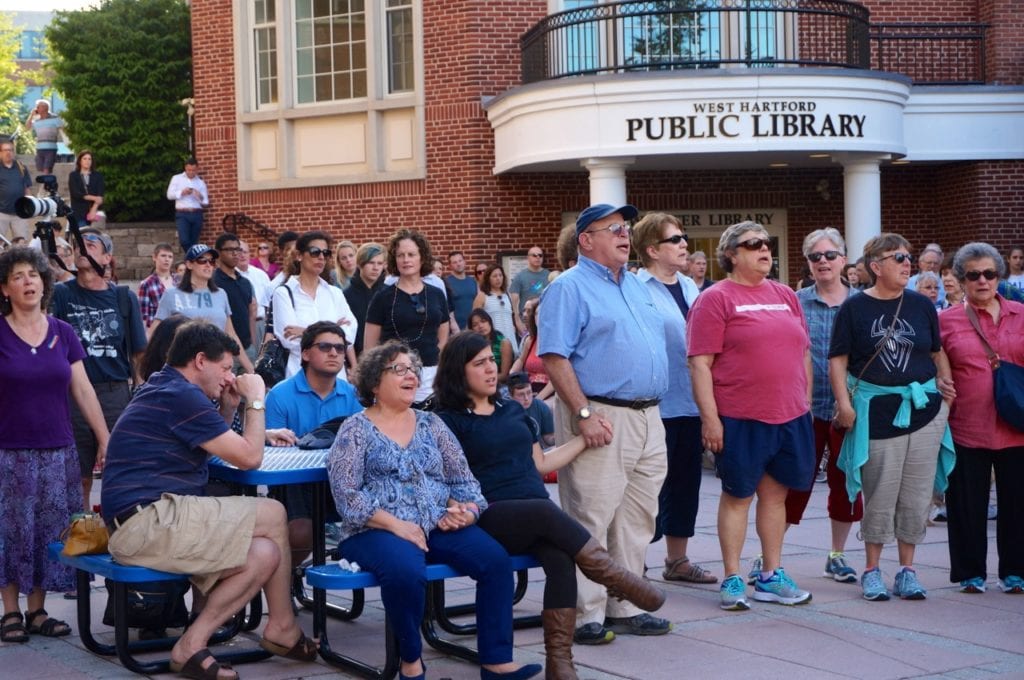 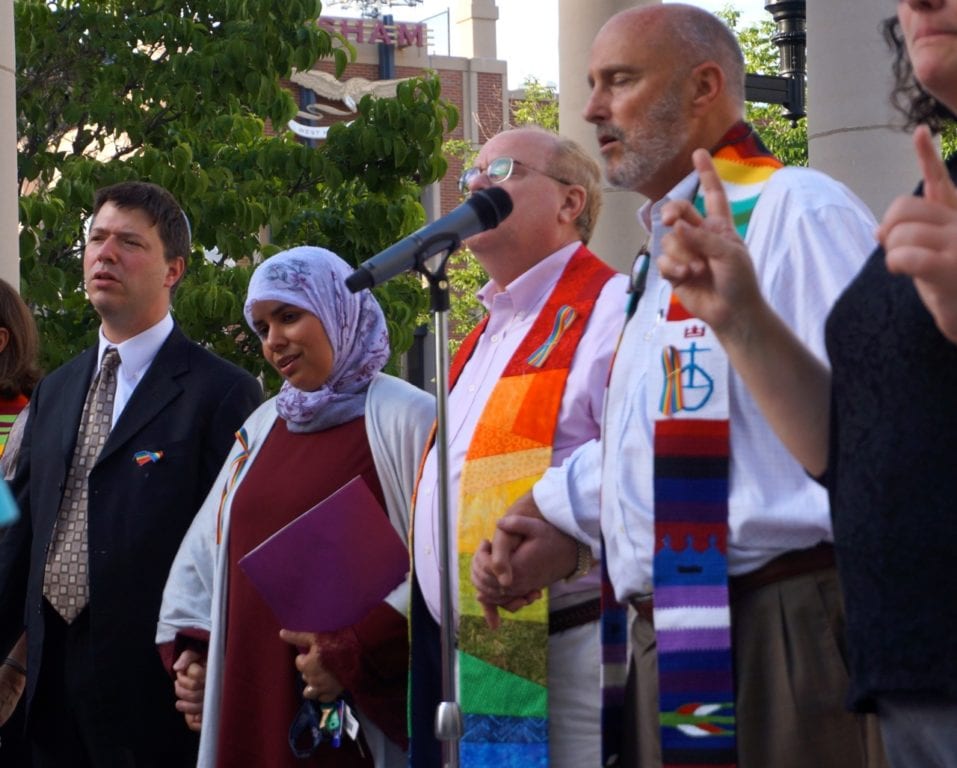 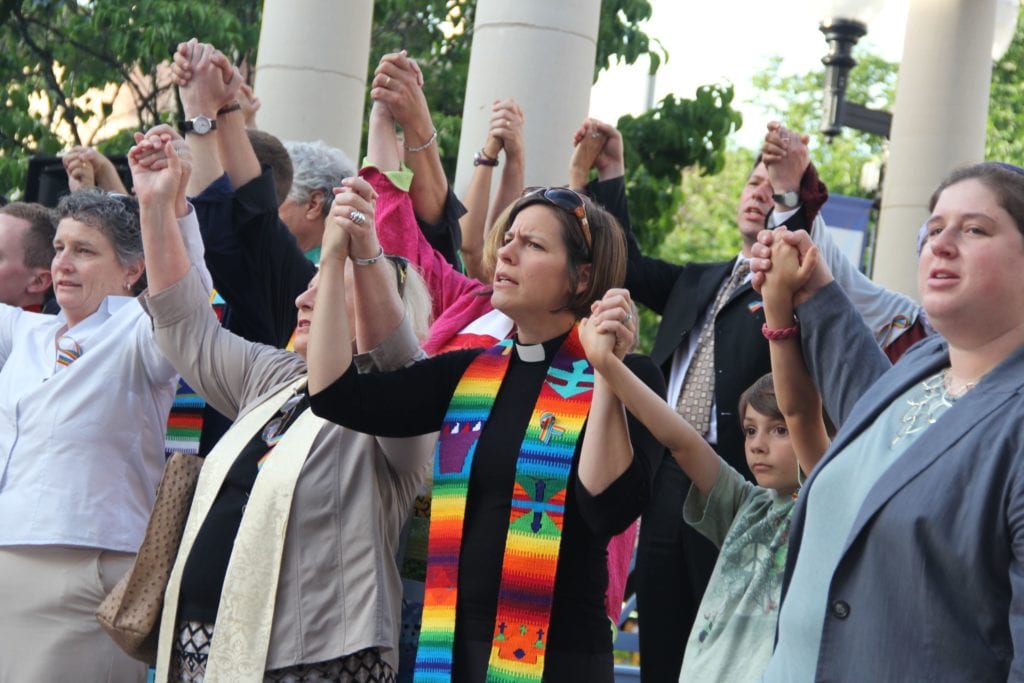 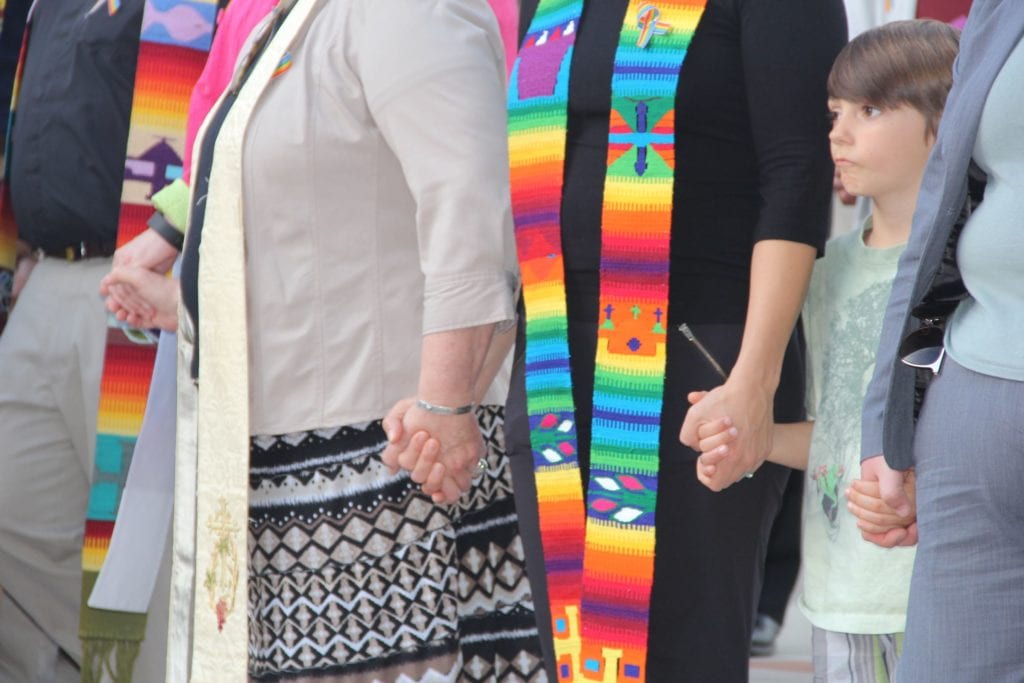