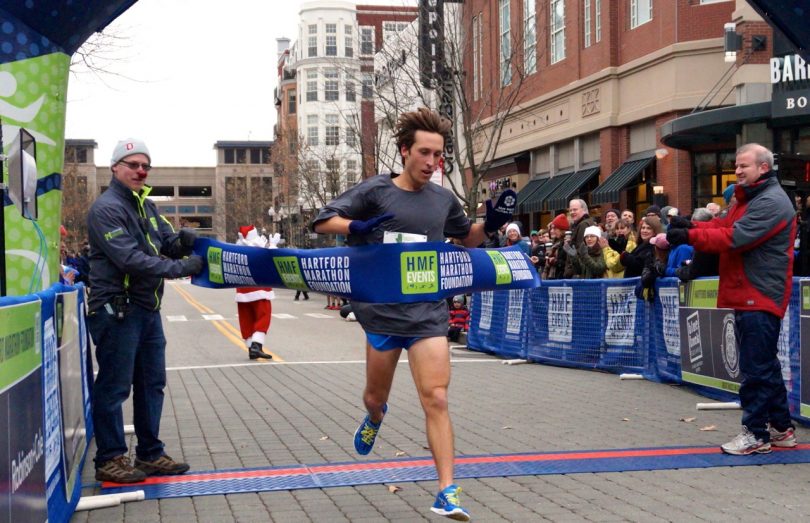 West Hartford native Everett Hackett has run – and won – a lot of races over the years, and said he had trained well and felt good heading into Sunday’s California International Marathon (CIM) in Sacramento.

“I felt very good going into the race (taper time!) and very good in the early miles, but having run six marathons before this one, I knew not to be tricked into thinking that it would last because I knew what was coming down the road,” Hackett, 29, told We-Ha.com. What was coming down the road he said, adding a “haha,” was “lots and lots of pain.”

To qualify, Hackett had to run a sub-2:19 race, and his fastest marathon previously was 2:20.23 – at this year’s Hartford Marathon on Oct. 12, where he finished in third place overall.

For a bit of extra perspective, the pace needed to run 26.2 miles in 2 hours and 19 minutes is an average pace of 5:18 per mile. Most people can’t run even close to that pace for just one mile or a fraction of a mile, and he had to do it for 26.2.

“With many of his friends, athletes, and fans following along on the race’s ‘tracker website,’ Everett clicked off mile after mile right on pace, before falling a few seconds off pace from miles 20-25,” Jeff Billing, also a track and cross country coach at Hall and coach of the local running club Hartbeat, said in an email. “We could all see his projected time changing from 2:18:50 to 2:19:10 as we waited for the final update to come over the internet with his finishing time. And – then it came – he ran the last mile in 5:14, just enough to cross the line in 2:18:53, a mere 7 seconds under the time needed. He did it!!!”

OTQ!!!! Everett Hackett has qualified for the Olympic Trials marathon with a time of 2:18:57. On to Atlanta! pic.twitter.com/mBXWyspdbM

This is not the first time Hackett has qualified for the Olympic Marathon Trials. The 2008 Hall graduate, who ran at George Mason University, qualified in 2016 with a 1:04:34 time in the Jacksonville Half Marathon. On Feb. 13, 2016, he exceeded his expectations when he finished in 87th place in the trials, with a time of 2:35.08, on a scorching 80-plus-degree day in Los Angeles. 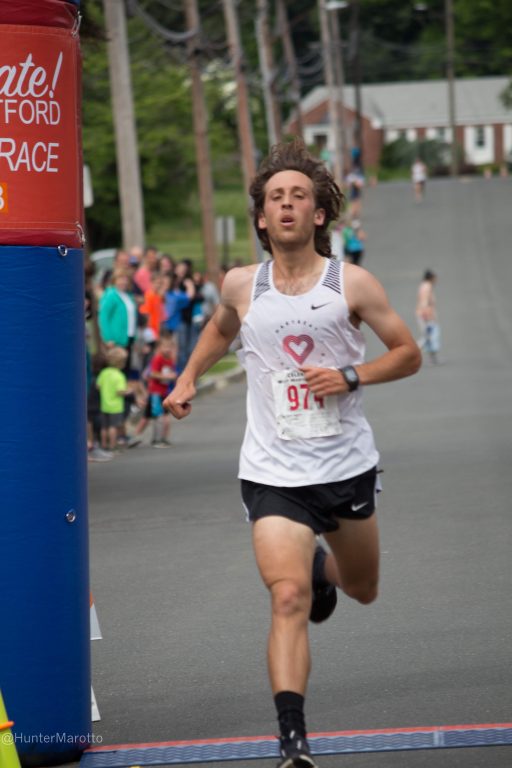 Since then Hackett has been racing very well at many distances, including in local races. He holds the overall course record in West Hartford’s Blue Back Mitten Run (15:28 on Dec. 3, 2017) and holds the record (15:04) set in the Celebrate West Hartford 5K, a race which he also won in 2018 with a time of 15:07.

He won the Fairfield Half Marathon in June 2017, in a time of 1:07.16, the first American male to win that race in more than a decade, and finished in 16th place among a very competitive field in this year’s Manchester Road Race.

“My training was the best it’s ever been going into CIM,” Hackett said. “This whole fall has been awesome for me which I attribute to really good consistency in workouts and mileage, and also just running more mileage in general. In all my other marathons I went in running not enough miles. This time around going into Hartford and CIM I made sure I was running enough miles and doing longer workouts.”

Hackett said his weekly mileage varies, but in preparation for CIM there were weeks when he logged 100-plus miles.

Hackett said his short-term goal now is to see how well he can do at the Trials, where he will run with roughly 200 other qualifiers.

“I’m gonna get back to work after my body recovers and try to put together a really good consistent training block,” Hackett said of his preparation for the Olympic Trials. He’s hoping to improve on what he did in 2016, but noted that the Atlanta course is hilly, “so I better be running some hills in the coming weeks!”

Long-term, Hackett said, “I want to continue to train with my teams (Hall cross country and Hartbeat Track Club) and help them accomplish some team goals!”