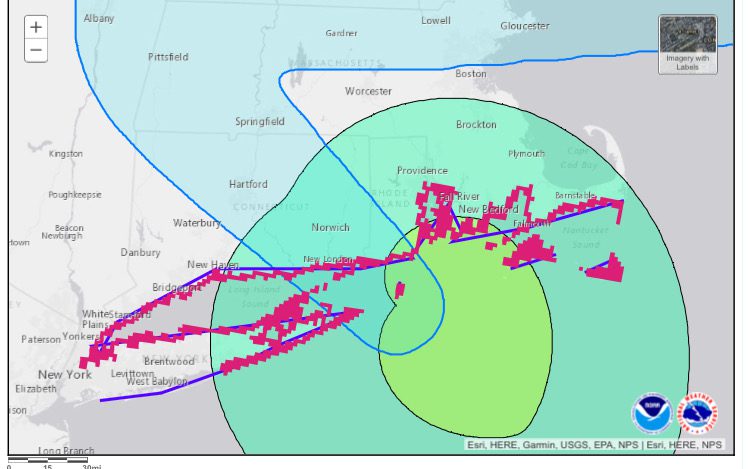 The track of Henri, which was a hurricane Sunday morning but later downgraded to a tropical storm, is still likely to have a significant impact on West Hartford. 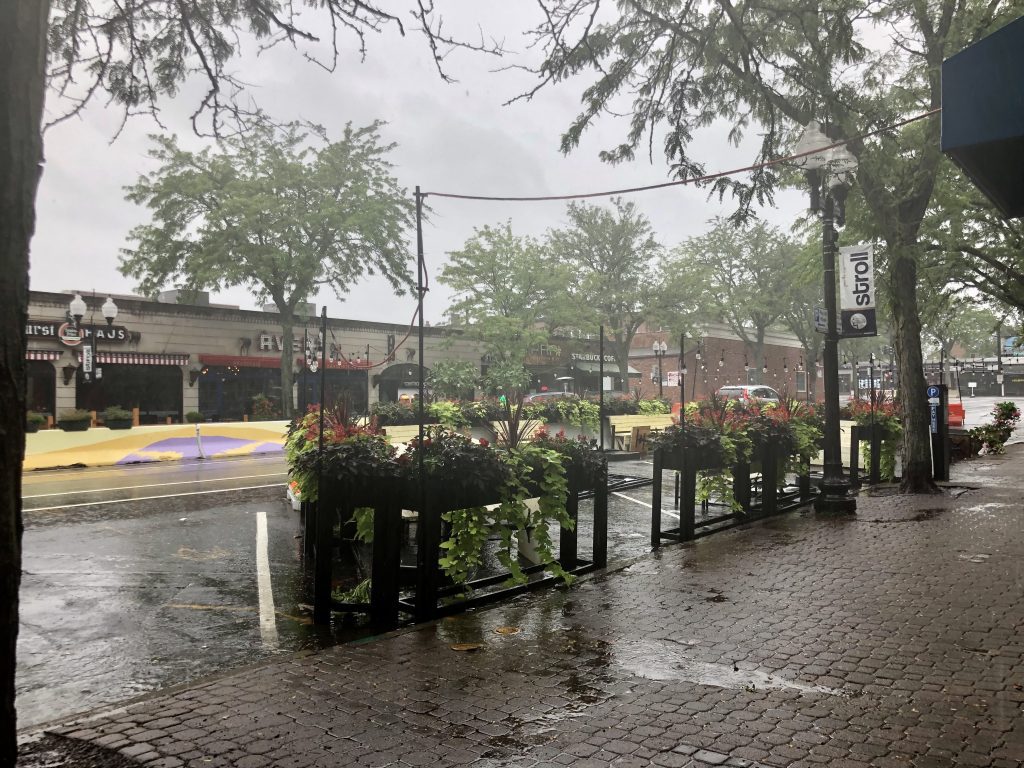 West Hartford Center was empty Sunday, as many businesses closed for the day and emptied their outdoor dining areas of furniture and umbrellas. Photo credit: Ronni Newton

Sunday dawned with tropical humidity and a breeze, and although a few squally showers passed through they were followed by an hour-long dry spell with a brightening sky, leading some to think that West Hartford and the surrounding area had been spared the brunt of Henri, which also was downgraded from a hurricane to a tropical storm.

Then the storm changed track and shifted to the west, and suddenly West Hartford was back in the cone, closer to the most potent part of the storm.

Just after 1 p.m. Sunday afternoon, after meeting in the town’s Emergency Operations Center and following a call with state officials, West Hartford Mayor Shari Cantor declared a state of emergency for the town (see PDF below), which will remain in effect until terminated.

Under the state of emergency, and pursuant to the town charter and  state statute, Town Manager Matt Hart is authorized to make emergency appropriations up to $100,000 and to take all other steps necessary to mitigate the effects of the emergency. The town manager is authorized to issue curfews, stay at home orders, or evacuations, if needed, by issuing an executive order.

“This is a long event,” she said. The combination of rain, wind, and more rain could lead to significant damage she said, particularly since it’s coming on the heels of last Thursday’s storm which dumped 5 inches of rain on the town and flooded roadways and basements.

“Because the ground is so saturated we’re not draining,” she said, which could lead to more street flooding. 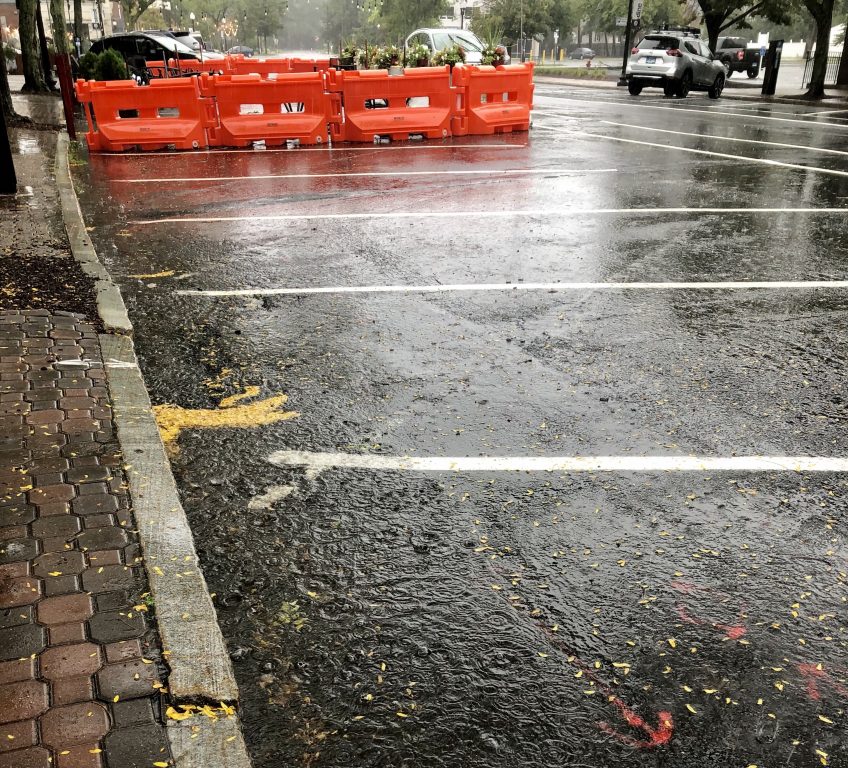 According to the National Weather Service, West Hartford is forecast to received another 2-4 inches of rain through Monday with winds steady at 20-25 mph and gusts around 50 mph.

Many area businesses announced through emails and social media that they would be closed for the day on Sunday, including Westfarms shopping center.

LaSalle Road, normally bustling on a weekend, looked like a ghost town, with most of the outdoor dining corrals emptied of their furnishings and umbrellas in advance of the storm.

Department of Public Works crews have staff deployed in three areas of town – Town Hall Parking Lot, the former UConn parking lot on Trout Brook Drive, and the Public Works facility on Brixton Street – to ensure they are ready to respond to issues that arise. 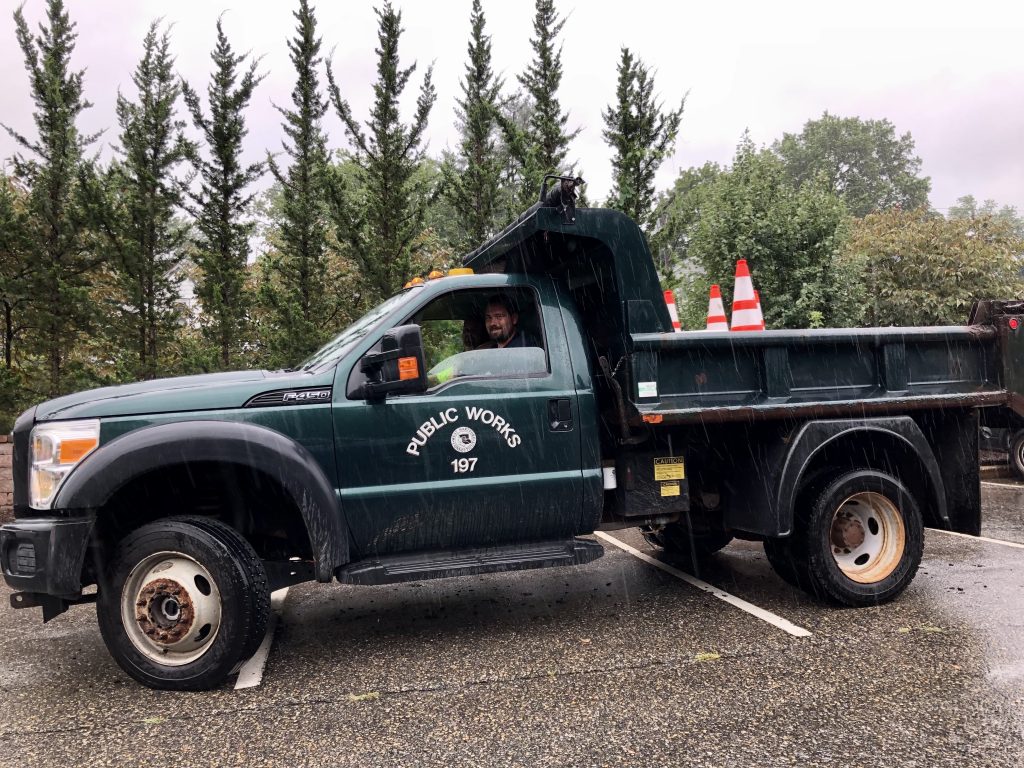 Utility companies have deployed additional resources in preparation for Henri. “We’ve got twice as much as we’ve ever had before,” Lamont said, in comparison to Tropical Storm Isaias last summer, where it took days to even get assessments completed.

The storm, which churned ashore early Sunday afternoon in the Watch Hill, Rhode Island area, will impact all corners of the state.

Lamont’s Chief of Staff Paul Mounds said residents of several nursing homes on the shoreline had been temporarily moved to other facilities due to evacuation orders in those areas.

The president signed a pre-landfall declaration of emergency on Saturday, Lamont said, and municipalities will be asked to quantify the extent of any damages.

We-Ha.com hosted a Facebook Live event with Cantor and Hart at noon Sunday, and watch for notifications of future updates on Facebook. The video of the event can be seen below.

The town is ready to assist the community during and after the storm, and residents are urged to use the non-emergency line, 860-523-5203 if there are any concerns and reserve the use of 911 for life-threatening emergencies only.