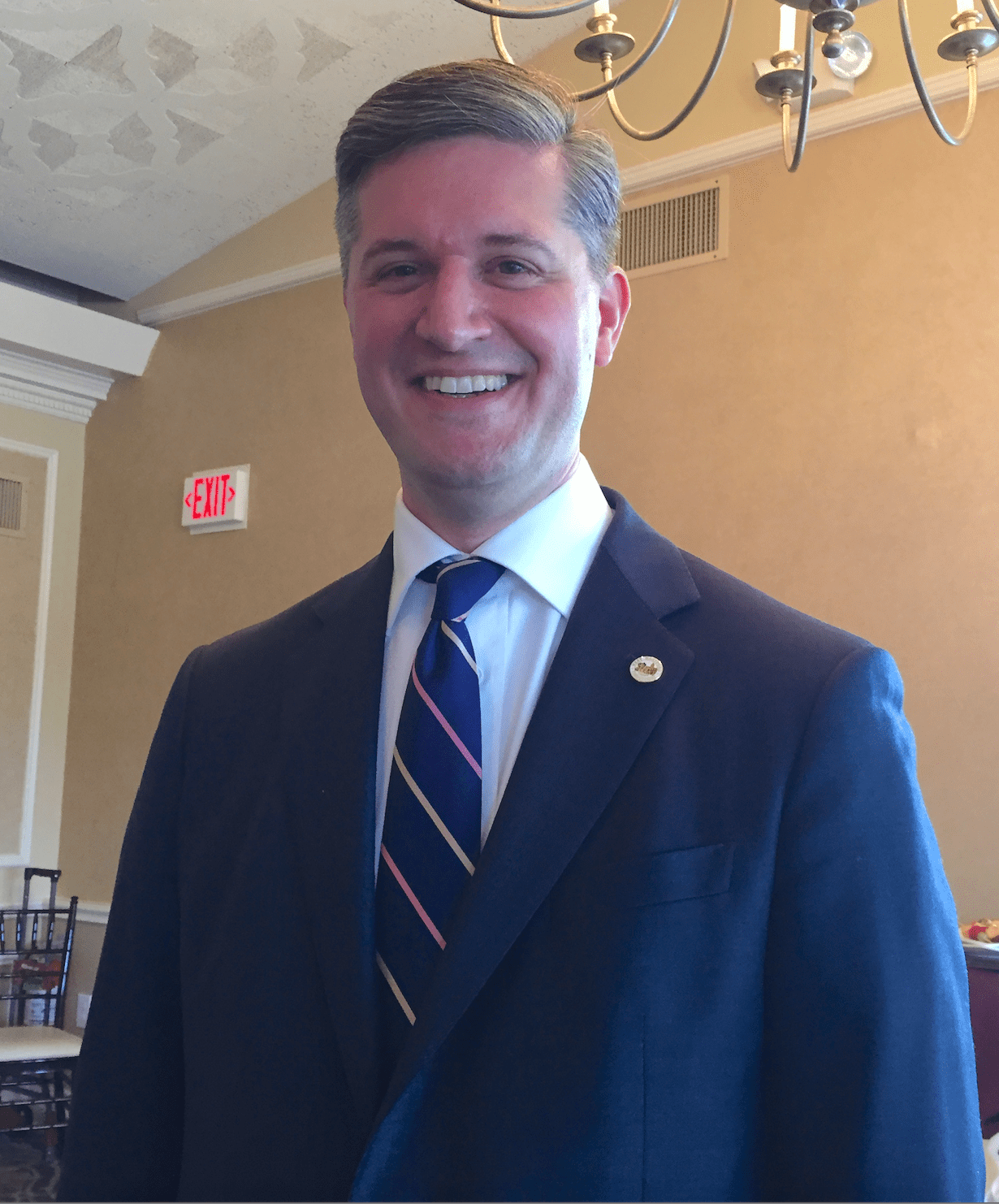 West Hartford Mayor Scott Slifka made the surprise announcement Thursday at his annual State of the Town address that he will step down after the town’s budget has been finalized. 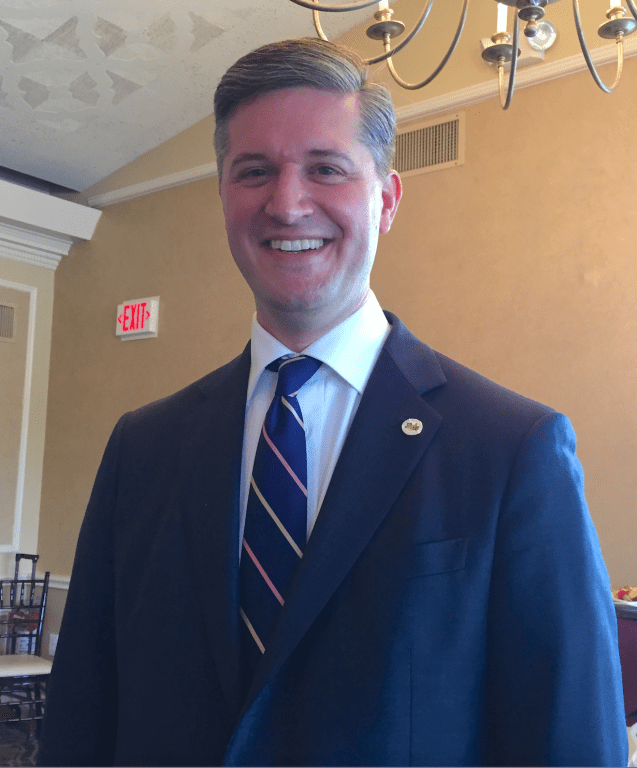 West Hartford Mayor Scott Slifka announced Thursday that he will be resigning as mayor at the conclusion of the budget season after accepting a new position with the LEGO Group. Photo credit: Ronni Newton

West Hartford Mayor Scott Slifka concluded his annual State of the Town address Thursday with an announcement that shocked nearly every single person in the room: He will be stepping down as mayor.

“My time as your mayor will soon come to an end,” Slifka said to the capacity crowd that attended the annual Chamber of Commerce luncheon at Wamponoag Country Club.

Slifka has accepted a new position with his employer, the LEGO Group, and effective Monday, Feb. 1, 2016, will become the company’s deputy general counsel, a global position that reports to the general counsel in Denmark.

“It’s a global role, not a local one,” Slifka said. He will oversee a team of lawyers in Denmark, London, and Asia.

“As exciting as the role may be, I expect that it will also be very demanding and I have concluded that it won’t be compatible with running a similarly-demanding city in one’s spare time, along with trying to be a good husband and a father,” Slifka said.

“And the current mayoral salary as you know doesn’t make it much of a debate,” he said with a laugh. In West Hartford, the mayor and Town Council members are all volunteers.

A collective gasp filled the room when Slifka made his announcement.

The news came as a complete surprise to everyone in the room other than Slifka’s wife Noelle, his parents, and Chuck Coursey who was tasked with sending out a news release as soon as the announcement was made. Even Slifka’s brother Jonathan and Deputy Mayor Shari Cantor did not learn of his decision until just before the speech.

Slifka said that he does not have an official resignation date and will remain as mayor through the end of the budget process, and perhaps into May. The Town Council will adopt the next budget at the end of April.

“I will work with my collegues, and particularly [Deputy Mayor Shari] Cantor to ensure a seamless transition,” he said.

Slifka also said that he will not be going anywhere, and will remain living in West Hartford. He did leave the door open for a future return to politics, however, and said he has a lot to contribute at the state level.

“I suspect that in the coming years my state and particularly my party may benefit from someone with my skills, perspective, and voice,” Slifka said. “And I leave with pride in knowing that I helped make a great community even better and the firm belief that my record is as strong as anyone’s,” added Slifka.

Slifka said that the decision was “extremely bittersweet.” He said that he learned about the new job around Christmastime and just finalized the terms. 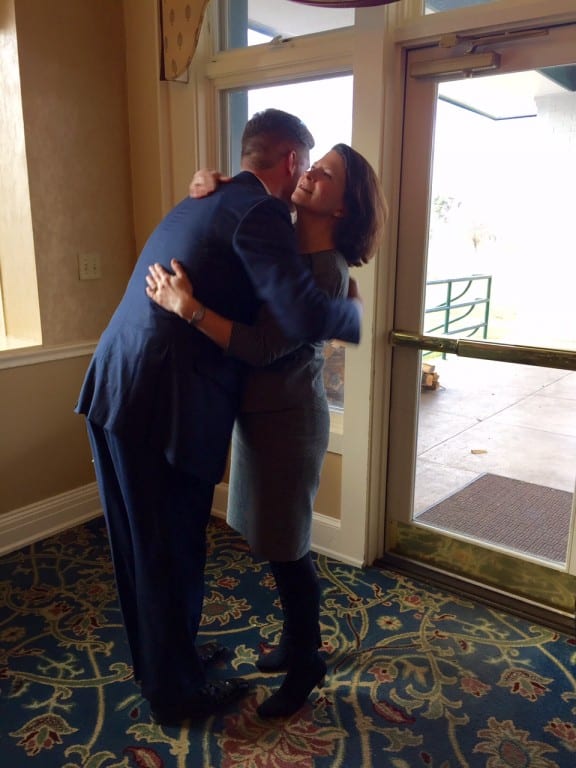 Mayor Scott Slifka hugs his wife, Noelle, after making the announcement that he will resign this spring. Photo credit: Ronni Newton

LEGO did not tell him that he needed to step down, Slifka said, but he feels like he needs to be able to still be a husband and father and meet the demands of the new job as well.

“There are too many nights like Tuesday,” Slifka said, referring to the Town Council meeting that ended at 11 p.m., which he attended straight after a full day at work and after being up most of the previous night with sick family members. “You have to be sharp at both roles,” he said.

“It’s nice to be able to do this in a positive way, and to leave the town in excellent hands,” said Slifka. He said he would be “shocked and disappointed” if Cantor is not elected mayor, but her role as deputy mayor does not make it automatic. The Town Council will elect the new mayor after he resigns, as it did when he was elected in 2004. The corporation counsel’s office is in the process of confirming the exact process and expects to issue a ruling on Friday.

After he resigns, Slifka said he will not be involved in town politics. “I think it’s appropriate to step off the town stage,” he said.

Cantor said she learned about Slifka’s plans when he pulled her aside right after she arrived for Thursday’s luncheon. She thought he was going to speak with her about an issue.

“He told me then that he had gotten this job, and he said he supports me and would be there for me,” she said. 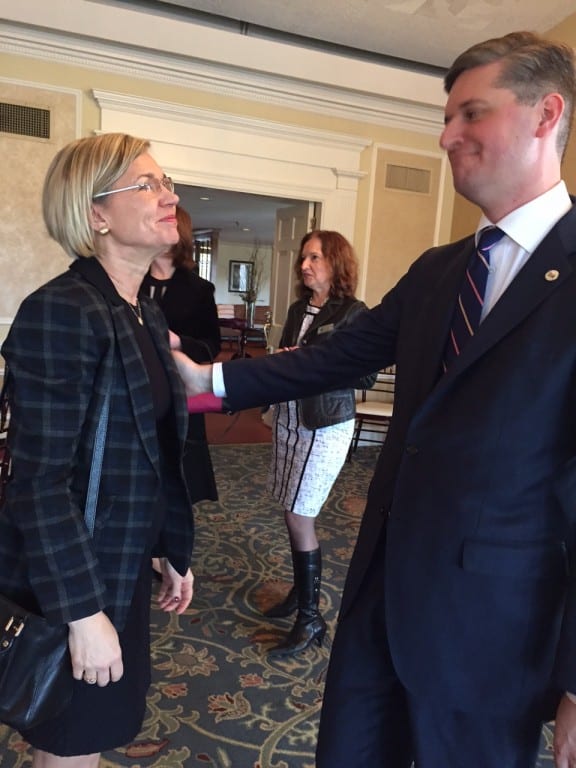 Cantor said she was “verklempt,” and a little bit in shock. “I’m so happy for him, but I also know he really loved being mayor.”

Slifka was first elected to the Town Council in 2001, became deputy mayor in 2002, and took over as mayor when Jonathan Harris resigned to become a state senator in 2004. He was the youngest mayor ever elected in West Hartford, and has been the town’s longest standing mayor.

Slifka was elected 10 days before his marriage and his 7-year-old daughter Betsy has always known him as mayor. He said that when he asked how she would feel if he was no longer mayor. “To my surprise, she cried,” he said.

Others expressed sadness as well. “I’m shocked, totally shocked, and I’m sad,” said newly-elected Town Council member Beth Kerrigan. She said she didn’t see it coming and had hoped to learn a lot from Slifka. “To me it’s a real loss of a wealth of knowledge and a loss for the town as well. You can’t replace that.”

“It will be like the end of era,” Minority Leader Denise Hall said. She has served in her position since 2009, always with Slifka, and said their families are longtime friends so it was easy to start working with him.

“While we haven’t always agreed, we’ve always been able to disagree respectfully. Our good working relationship is a model which I wish were more prevalent in the state and in the country,” Hall said.

“He brings an incredible institutional knowledge to bear on his job as mayor and that will be missed greatly,” said Hall. Slifka has been at the helm of West Hartford during a very transformative time, and is going out at the top, she said..

Although it is not a given, Cantor said she very much wants to be mayor and would be humbled and honored to have the support of the Council.

“I’ve worked really hard for years side-by-side with Scott,” she said. In addition to serving as deputy mayor, Cantor has chaired the Town Council’s finance committee, is a lifelong resident, and cares deeply about the community.

“I would do my best to be as a good a mayor as possible,” said Cantor, adding that Slifka is a hard act to follow. “He’s a fabulous leader and a good friend, a wonderful gentleman, humble, respectful, and an honorable man who always has the right intentions. I see him as my little brother and mentor all rolled into one,” she said.

“Of course I would!” replied Cantor when asked if she would provide nightly recorded messages to residents in the event of a catastrophic event like the October 2011 snowstorm. Residents still fondly remember Slifka’s “good night” phone calls.

Coursey said that Slifka is “very lucky to be able to step down on his own terms.”

“I’m happy for him, but sad for the town. There are some great folks to pick up where he left off,” Coursey said.