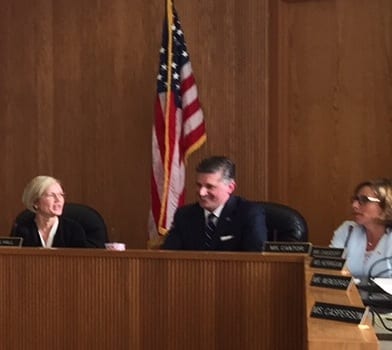 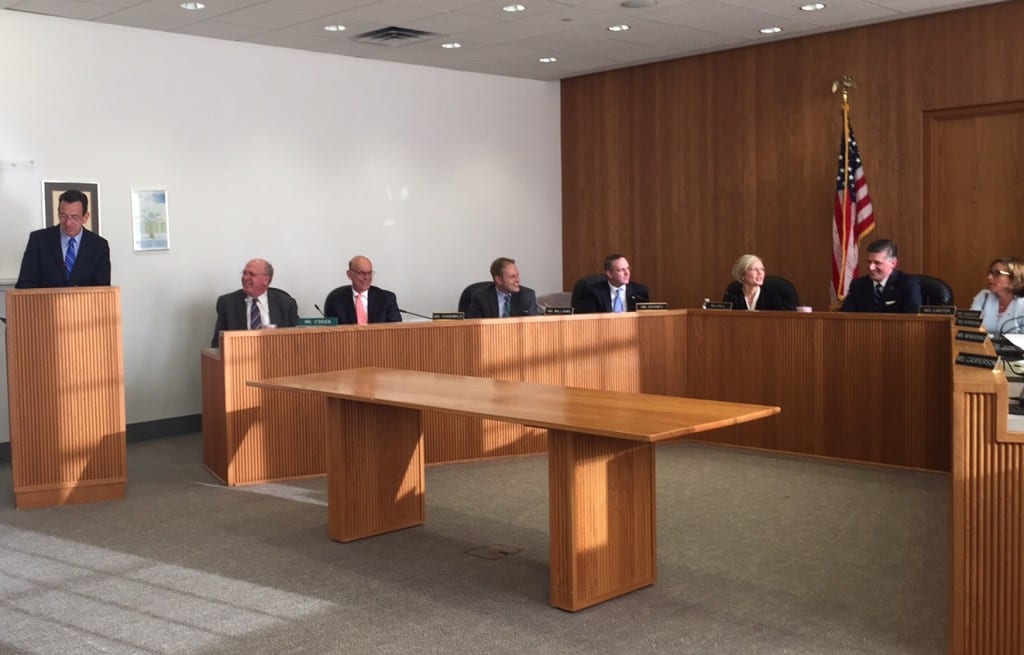 An overflow crowd of family, friends, current and former politicians, and town administrators and staff arrived at West Hartford Town Council Chambers Monday night for the official resignation and send-off of Mayor Scott Slifka, who was West Hartford’s youngest mayor at age 30 when elected in 2004, and also has the distinction of being the town’s longest-serving mayor.

Slifka, who recently accepted a promotion to deputy counsel of the LEGO Group, first announced his resignation at the State of the Town Address in January.

Gov. Dannel P. Malloy slipped into the room and then took the podium, delivering one of many tributes to Slifka and acknowledging that the event was a “bittersweet moment for many folks.” There were several proclamations read, including Malloy’s which declared May 16, 2016, “Mayor Scott Slifka Appreciation Day in whole of state of Connecticut, not just in West Hartford.” Lt. Gov. Nancy Wyman was also in the audience.

Slifka was presented with a Certificate of Public Leadership from the office of State Treasurer Denise Merrill, an official thank you from local veterans organizations delivered by American Legion Post 96 Commander Moe Fradette, a proclamation from U.S. Rep. John Larson, and a citation from the town’s entire legislative delegation. The Noah Webster House and West Hartford Historical Society presented him with a framed “Excellence in Office” certificate and a historical map of the town. He also received a chair from the Town Council, the customary gift commemorating retirement of Council members.

The presentation of proclamations and gifts was only one small part of the evening, which included heartfelt thanks and tributes by all Town Council members prior to the business of electing a new mayor and deputy mayor. Myriad waves of rousing applause and standing ovations followed the statements. 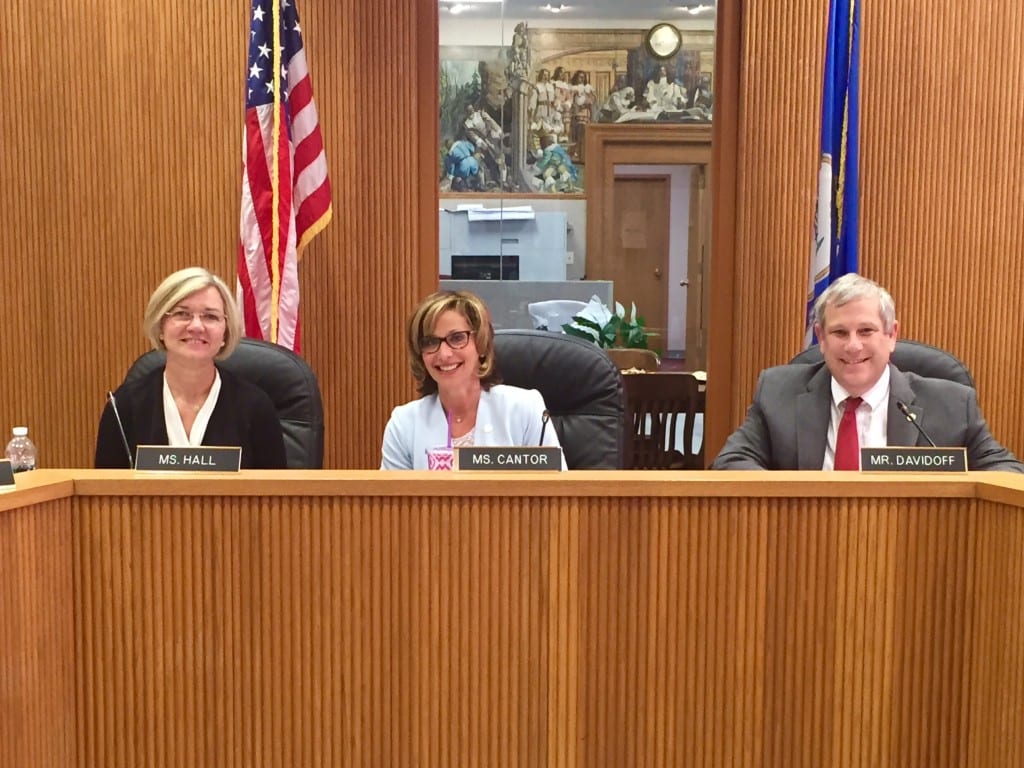 Shari Cantor, who later in the evening was elected president of the Town Council and mayor of West Hartford, was audibly choked up as she paid tribute to her good friend and political mentor. As she recited a lengthy list, Cantor said Slifka’s legacy will remain in the countless activities and decisions the Town Council has considered since he was first elected in 2001, ranging from Blue Back Square, to changes in leaf pick-up, to outdoor dining, to more recent discussions of Niagara Water Company and the UConn West Hartford campus.

Among the most notable were the strength and leadership Slifka exhibited during the epic October snowstorm and resulting power outage in 2011, Cantor said. Many residents will never forget Slifka’s nightly phone calls during that crisis, reassuring them of understanding and support from the town government and administration.

“It has been such an honor and pleasure to be with him and serve with him,” Cantor said. She said that Slifka’s years as mayor have exemplified “leadership, hard work, commitment to values, and common sense.” Slifka led West Hartford with civility, something residents expect and will probably now demand.

Minority Leader Denise Hall noted Slifka’s “infinite patience.” Although they have not always agreed on specific issues, Hall said that she will miss his institutional knowledge.

Slifka “excelled at the ability to deal with every situation, to defuse the heated moment … to find a way to move forward,” Hall said.

“I am most grateful for his assistance over the years with veterans projects,” said Hall, including participation in Veteran’s Day and Memorial Day programs. She emotionally announced that she and her mother, Marion Berard, have decided that they will still hold a flag-planting on the Saturday before Memorial Day (May 28) but will no longer hold the program that always followed it. Hall’s father Jean Berard, who passed away in 2014, and Slifka were an integral part of the program and it seems the right time to move on, she said.

Ben Wenograd, who has only had the opportunity to serve with Slifka since November 2015, said that he had no idea the impact serving on the Council could have on someone’s life until he heard Slifka pay tribute to three Council members who retired last fall.

Wenograd praised Slifka’s “fierce intellect and passion for the issues” and said that although he had been looking forward to a long period of serving with him, he is thankful for what he has been able to learn. “I am truly grateful for having had my turn … to learn from such an awesome public servant.”

Council member Chris Williams said he has greatly appreciated how Slika has always been “a good ambassador for our town.”

Although they belong to different political parties, they’ve been able to have some great conversation, Williams said, and like Wenograd he is disappointed that not to be able to serve together for a longer period of time. “[I’ve] most appreciated your experiences. Thank you for your service, you’ve done it for so long and so well,” Williams said.

Beth Kerrigan, also newly-elected last fall, said she feels like she is losing a lot by not having more time to serve on the Town Council with Slifka. However, she joked, “You came in as the youngest and stayed the longest meaning that you came in too early and stayed too long.”

“Thank you for your years of service and all the smart decisions you’ve made … Thank you for service, leadership, and dreaming big,” said Kerrigan.

Noting the huge crowd and recognition Slifka received Monday night from high-level politicians, Council member Chris Barnes joked that he was waiting for Pres. Obama to show up. He said that Slifka has seemed to be everywhere during his tenure. “The mayor has taken this concept of community service to a whole new level,” said Barnes.

Slifka was always willing to give a speech and share his time, and it was “remarkable,” Barnes said, adding his thanks.

Judy Casperson remarked on how West Hartford has grown over the past 15 years since Slifka first joined the Town Council. She praised Slifka’s talents as a community leader and negotiator. “You’ve led with a clear, calm presence,” she said, especially during disasters.

“I know you’ll treasure the fact that you have led West Hartford to many accolades,” said Casperson, noting the awards West Hartford has received for the “best town” in a variety of categories including safety, and top rankings for its high schools. “Thank you for sharing that treasure of time and talents. Thank you for sharing your family with us. I wish you the best in the future, and am feeling like to keep you here much longer would be selfish.”

“I think that one of your greatest attributes is the way you govern, your sense of respect, ability to build consensus and support” across the political aisle, said Leon Davidoff, who later in the meeting was unanimously elected deputy mayor.

Davidoff said he appreciated how Slifka has always been honest and maintained a sense of civility, style, and grace. “I wish you all the best – it won’t be goodbye, it will be until you serve again,” said Davidoff.

Town Clerk Essie Labrot was given a rare opportunity to speak during the Council meeting, and recited some of the facts of Slifka’s tenure, including the 282 Town Council meetings, 323 public hearings, and hundreds of subcommittee meetings which he has attended. He has received more than 10,000 pieces of mail and more than 20,000 emails, she said. The topics have ranged from dog parks to chickens and parking tickets, adding that the mayor cannot fix parking tickets.

Slifka has given so much of himself that people are often surprised to realize that he has another job. “You never looked tired! There’s not a bad photograph of you out there,” said Labrot, adding that she is “looking forward to seeing what your next adventure might be.”

Slifka himself spoke last. He said he was “keenly aware that this is as much as about getting on with the new and out with the old.”

He gave sincere thanks to his entire family. Slifka and his wife Noelle were married just 10 days after his election to Town Council in 2001 and he even had to reschedule his swearing in because he was on his honeymoon. His daughter, Betsy, was born in 2008 and has only known her father as the mayor.

Slifka’s parents, Janeace and Robert, his brother Jonathan and sister-in-law Andrea, have all been great role models and a fantastic support system, he said.

Slifka remarked at how fast it has all been, beginning with his first political service when as a 17-year-old Hall High School student he served as Board of Education representative. He has served the town for part of his teens, part of his 20s, all of his 30s, and part of his 40s, he said. In more than 4,000 days as mayor he has served with 29 Council members, four deputy mayors, three town managers, two town clerks, and one corporation council. “I was blessed to be invited into every school and house of worship,” he said.

On Sunday night, as he cleaned out his office and drafted his resignation letter, Slifka said he walked the halls of Town Hall, looked at the pictures on the walls, and re-read four different histories of West Hartford. “It’s something that made me feel good about the town, gave me sense that I was part of something historic and just a small part of the timeline,” he said.

“I leave very comfortable now knowing the town is in great hands with Shari [Cantor] at the helm,” said Slifka.

“I will miss getting to wake up each morning to do something good for someone in need,” said Slifka. He said he will miss the relationships and the small part he has played in making a great town even better. “I’m most proud that we combined economic success and social responsibility,” he said.

Slifka concluded with three quotes, joking that they all came from Republicans.

Former Town Council member and Deputy Mayor Kevin Connors once told Slifka after a vote to “remember something – you’re going to live here a lot longer than you’re going to govern here,” adding that it is imporant to get past petty squabbles because these are your neighbors.

Slifka said he always remembers these words from Peggy Noonan: “It’s practical to do what you think is right and keep talking about it … they can tell when you’re sincere and led by principle.”

If the standing ovation and lengthy round of applause Slifka received was any indication, he has certainly done just that.

Before taking a break so guests could enjoy a celebratory cake, the Town Council also swore in new member Dallas Dodge.

“I will work hard. I will listen. I will always choose the path that is in the best longterm interest of West Hartford,” said Cantor. “I am excited and humbled to serve as mayor of West Hartford.”

To learn more about Cantor’s background, click here for a profile.