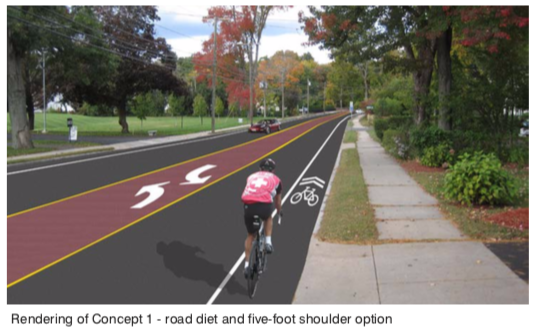 Some residents had requested that a road diet trial be conducted during the rehabilitation of the North Main Street bridge, but West Hartford’s town manager and staff are recommending that some work take place in advance with the physical trial to be conducted immediately after the bridge work has been completed.

Traffic on a stretch of West Hartford’s North Main Street will be impacted beginning this spring by lane closures due to rehabilitation of a deteriorating bridge in the Wyndwood Road area, and once that is completed there will likely be a different traffic pattern shift, as a long-discussed trial for a road diet gets underway.

Town Manager Matt Hart told told the Town Council’s Community Planning and Physical Services Committee Wednesday morning that approximately $314,000 will be included in the capital improvement section of the budget he will present in March, to be used for a road diet trial on North Main Street.

A group of residents have been strongly advocating commencing the road diet trial as soon as possible. At a meeting of the Community Planning and Physical Services Committee on Dec. 5, 2018, town staff had been asked to vet the option of implementing the trial during the bridge construction, and to consider modifying the entire section of North Main Street between Fern and Asylum, before and during the bridge project, so that there will be one travel lane in each direction with wide shoulders similar to the section of South Main Street south of Webster Hill Boulevard.

“We don’t think it is feasible or would make the most sense,” Hart told the committee on Wednesday, due in part to the need to make lane modifications and signal changes both north and south of that stretch of the roadway. The lack of a center turn lane on North Main Street will also be problematic.

Hart also reiterated that town staff does not think it makes sense to conduct a road diet trial when typical traffic flow is also impacted by the bridge project.

“If the trial were to be conducted concurrently with the bridge rehabilitation, it would not function as a true trial and demonstrate the real benefits, or detriments, that a road diet would have on North Main Street and the surrounding roadway network. Questions and concerns would most certainly remain,” Hart wrote in a memo to the committee. He anticipates more traffic will be diverted to Mountain Road and Trout Brook Drive as a result of the bridge work, which will include narrowing to one lane in each direction for the approximately 18-month duration of the project, with four shifts in traffic patterns as the work progresses.

Hart told the committee on Wednesday that in order to accomplish objectives in 2016 study, “I am recommending that the town conduct a comprehensive trial of the road diet and to do that following the completion of the bridge project itself.”

The entire road diet trial would not need to wait for the bridge work to be completed, however. Hart said that the contractor the town will hire will be able to do preliminary work, such as the concept plan, “so that ideally once the bridge project is complete we can launch directly and try the road diet.”

Hart said that the town hopes that a contractor can be selected and funding finalized so that bridge rehabilitation work will begin this spring. He said he would like to begin a road diet trial, lasting four to six months, as soon as the bridge work is complete, which is scheduled to be in the fall of 2020.

“Ideally we want to be able to commence this trial coming out of the bridge project so that transition is seamless,” Hart said, although that will be somewhat dependent on the weather due to the durability of temporary road markers.

If the road diet trial is successful, there would not be much outstanding work needed to implement it on a permanent basis, Hart said.

A possible road diet for North Main Street has been in discussion for more than three years. A study was funded by a grant, and undertaken by the Capital Region Council of Governments (CRCOG) in 2015. Among the goals of the original study were determining ways to provide better accommodations for bicycles and a buffer for pedestrians.

Following the completion of the grant-funded study, a draft report was presented by CRCOG to the town in June 2016. Four different options for a road diet were presented along with several possible add-ons, with the most basic – and least costly – option including re-striping of a portion of the existing roadway so that there would be one travel lane in either direction, and a turning lane in the middle, with wider shoulders that could accommodate bicycle traffic and keep vehicle traffic further away from the sidewalks.

That basic option, known as “Concept No. 1” in the study that is attached in PDF form below, envisions three 10-foot-wide vehicle lanes on North Main Street  – one for northbound traffic, one for southbound traffic, and a two-way center lane that would convert to an exclusive left-turn lane at high volume intersections, Town Engineer Duane Martin said. 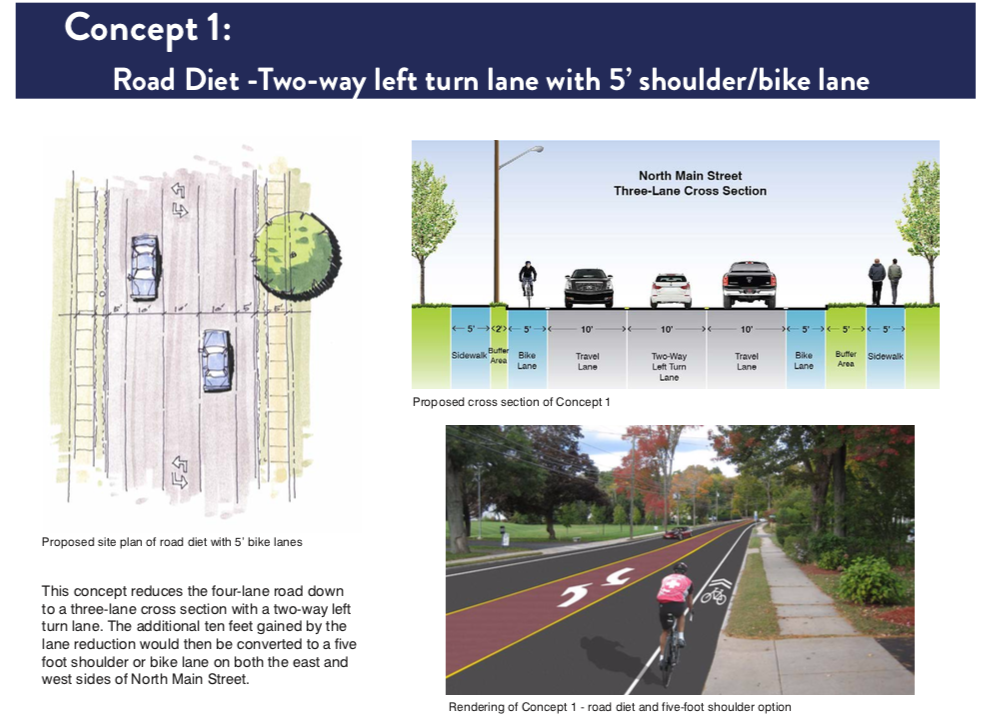 Shoulders on either side of the roadway will be 5 feet wide, and while somewhat narrow for a busy roadway, can be considered bicycle lanes, Martin said.

“All of the other alternatives provide three lanes, but have variations on the roadway shoulders, sidewalks and/or pathways,” Martin said in an email to We-Ha.com. He said that the CRCOG study did not recommend any particular alternative, but based on outreach and town staff feedback, Concept No. 1 will be used as the basis for the trial.

Martin said that during the bridge rehabilitation work, the contractor selected to assist the town with the road diet will be able to compile some traffic count information as well as vehicle crash history. An implementation plan for marking the roadway will also be developed, and public outreach will be coordinated by town staff and take place in advance of the road diet trial.

The Town Council will receive an update on those efforts, Martin said.

Following the bridge work, once the road diet trial is underway, there will be field observation and queue analysis, said Martin.

Once the trial is completed, there will be a survey and updates to the Town Council. He said the consultant may recommend required work at other impacted intersections.

Emily Hultquist from CRCOG attended Wednesday morning’s meeting. She said that a road diet of the scale being considered for North Main Street is “probably a first for our region, and that would be very exciting.”

“I’m very excited about the potential of this project,” Hart told the committee. He said that conducting the trial after the bridge work is complete would provide the opportunity to obtain and throughly vet the concept plan. “And, I think this is very important, we will be able to provide full notice to the community,” he added.

Council member Ben Wenograd, who chairs the Community Planning and Physical Services Committee, asked Hart to iterate why he thinks it’s important to utilize a consultant to conduct the road diet trial. Hart said that comprehensive road projects come at some expense, and he believes that there would be return on investment.

As a permanent solution, possible benefits and reasons for a road diet include a reduction in the frequency of crashes, increased safety for bicyclists and pedestrians, traffic calming through speed reduction, and an improvement in neighborhood aesthetics.

Minority Leader Chris Barnes asked about the Town Council’s involvement in the process, and Hart said the committee, and the Council as a whole, will be kept very much engaged. Deliverables will include a report from the consultant which may recommend making the road diet permanent, and much of the work done during the trial will facilitate the ease of doing that.

“We have every reason to believe that the trial will be successful,” Hart said.

“I think this is a worthy project and we should certainly consider moving it along, Wenograd said.

“I think this is a worthwhile endeavor,” Council member Dallas Dodge said, and added that since none of the Council members are trained engineers, it’s important to rely on the opinion of experts.

Dodge said that his initial gut feeling was that the road diet was not a good idea, but he has come around and also agrees that it makes sense to do the trial after the bridge project is completed.

The committee was not tasked with voting on the plan, but provided the consensus approval that Hart was seeking.