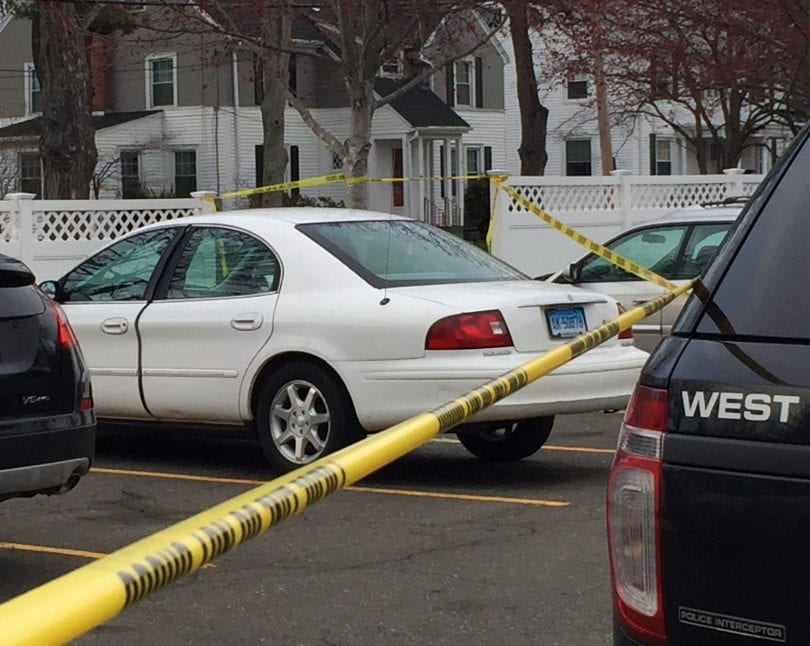 The deceased man who was found behind the wheel of this white car in the Brace Road parking lot in West Hartford Center has been identified as Andrew Carbone, 23, of South Glastonbury. Photo credit: Ronni Newton

Passersby contacted police at approximately 5:50 p.m. Saturday when they saw a man behind the wheel of his car who appeared to be sleeping.

According to police, officers reported to the scene and noticed the man was not breathing. They broke a window of the car to gain entry, and determined that the victim, now identified as Carbone, was deceased.

The Medical Examiner has not yet issued a report indicating the cause of death, Perruccio said in his email.

An obituary for Carbone has been published on the website for D’Esopo Funeral Chapel.

The obituary notes that Carbone worked long hours at physically-demanding jobs, but also played hard. “Unfortunately for Andrew, playing hard lead to a struggle to stay sober. He faced that struggle head on. He went to treatment, he fought for sobriety. He knew that he had much to look forward to; he was building a great and generous life. But he lost his fight on April 7, 2018 at the age of 23. And so we lost a man whom we loved, a man who knew so much about making the world better for all those blessed to know him,” the obituary reads.

A memorial service for Carbone will be held on Sunday, April 15, at 4 p.m., at the D’Esopo Funeral Chapel, 277 Folly Brook Blvd., Wethersfield, CT. Calling hours will take place in the funeral chapel from noon until 4 p.m. on Sunday.

The family requests that in lieu of flowers, donations in Andrew Carbone’s name be made to the Cherish the Children Foundation, P.O. Box 128, Glastonbury, CT 06033, and those donations will be dedicated to helping others struggling for sobriety.

For more information, or to express condolences online, visit www.desopo.com.