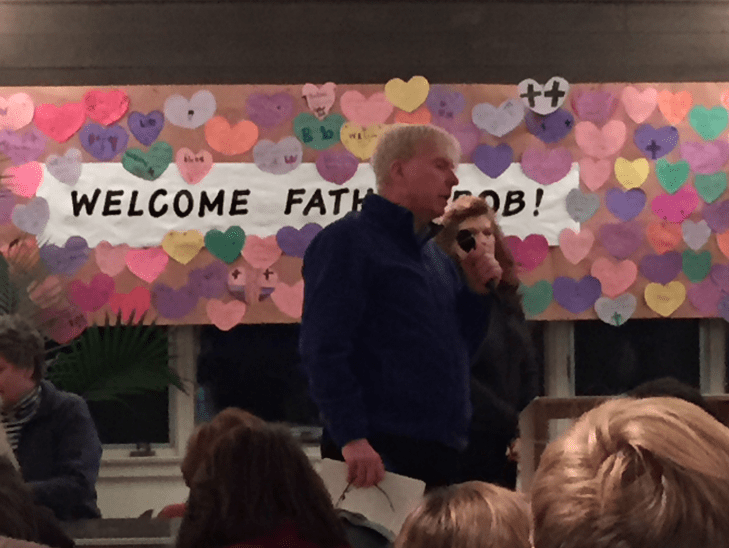 MDC District Counsel Bart Halloran answers questions at an informational meeting about the MDC's deal with Niagara Bottling Company on Monday night at St. Peter Claver Church. Behind him is Kim Green, who organized the meeting. Photo credit: Ronni Newton

Approximately 80 people attended a meeting Monday night in West Hartford to discuss the MDC’s plans to sell as much as 1.8 million gallons of water per day to Niagara Bottling Company.

MDC District Counsel Bart Halloran answers questions at an informational meeting about the MDC’s deal with Niagara Bottling Company on Monday night at St. Peter Claver Church. Behind him is Kim Green, who organized the meeting. Photo credit: Ronni Newton

A crowd of West Hartford residents, as well as some people Bloomfield, braved the icy cold and snow to attend an informational meeting Monday night at St. Peter Claver Church in West Hartford because they had questions, and concerns, about the Metropolitan District Commission’s (MDC) plans to sell a large amount of water to Niagara Bottling Company at a discounted rate.

The meeting was organized by West Hartford resident Kim Green, who reached out to members of the West Hartford Town Council and wrote a letter to the editor last week after learning of the MDC’s plans. She realized that many residents had no idea that the MDC planned to sell a large volume of the area’s water supply to a company that would mix it with trucked-in spring water, bottle it in plastic, and sell it throughout the country.

Not only would Niagara receive water at a discounted rate, but it also would not be subjected to the same restrictions as residential and other non-industrial users in the event of a drought, Green said.

Members of “Bloomfield Citizens,” which has galvanized itself into a grassroots organization through its Facebook group, provided background and their perspective on the proposed 443,000 square foot Woodland Avenue plant and the sale of water by the MDC.

Jane Nadel-Klein, a longtime Bloomfield resident who is originally from West Hartford, said that the deal has been surrounded by a “shroud of secrecy” from the very beginning, and Bloomfield residents were given no advance opportunity for public input by either the MDC or their town council.

Nadel-Klein, a professor of Anthropology at Trinity College, said that the Bloomfield town manager approved a $4.1 million tax abatement for a developer on Dec. 7, 2015, but Niagara’s name or involvement was not even mentioned publicly until the Town Council approved the abatement on Dec. 14.

Bloomfield residents were not given a forum to voice their concerns until Jan. 11, 2016.

Niagara had previously been involved in negotiations to build a plant in Bloomfield, but had abandoned those plans to building one in Ulster, NY. According to an article in the Hartford Courant, Niagara “re-engaged” with Bloomfield after the New York deal was thwarted by “a group of residents concerned about the number of gallons needed from the local water supply” as well as an inability to secure state tax breaks.

In addition to the concern about the plant, residents of Bloomfield – which like West Hartford is an MDC member town – voiced concern about the volume of water that Niagara would be purchasing at a discount. Bloomfield resident Brad Klein called it the “commodification of a resource that has become a profitable industry.”

The volume of water, and that it will be sold at a discount, is also of major concern to West Hartford residents who attended Monday night’s meeting, as is the apparent lack of transparency on the part of the MDC who seemingly did not inform its member towns of its plans with Niagara.

Deputy Mayor Shari Cantor and Minority Leader Denise Hall, neither of whom could attend Monday night, emailed Green in advance. Cantor said she was “very concerned about a lack of communication about this plan” and added that Town Manager Ron Van Winkle still had not received information he requested from the MDC. Van Winkle did receive the requested information on Tuesday.

Hall told Green she was very concerned about MDC’s statement that the deal was a “staff decision,” rather than one made by the agency’s Board of Commissioners.

Bloomfield resident Mark Saunders said that everything about the deal was “legally done but with the barest minimum of public notification” – and done so intentionally. He said that MDC CEO Scott Jellison told residents in January that the agency needs to sell more water because “conservation of water was the problem.”

According to the MDC’s Water Supply Facts, “over the last 30 years drinking water consumption in the MDC’s service area has decreased by over 27 percent, and as a result of the recurring costs associated with providing drinking water are distributed over a decreasing amount of water sold.”

MDC District Counsel Bart Halloran, who is a West Hartford resident, voluntarily attended the meeting and responded to questions from the audience. He said that the water to the Niagara plant would flow through an exiting pipeline that had sufficient capacity to fulfill Niagara’s needs of anywhere between 250,000 gallons and 450,000 gallons per day, depending on how many lines they decide to run in the process.

Halloran also said that the MDC’s total available water supply – originating from the Barkhamsted and Nepaug reservoirs – is 40 billion gallons. The reservoir is currently at 87-88 percent of its capacity.

“No matter who writes in asking for water, that’s the process,” Halloran said. The MDC is tasked with running and managing a water system. “The MDC cannot pick and choose between water users,” he said.

State Sen. Beth Bye, whose district includes West Hartford and Bloomfield, as well as Burlington and Farmington, also addressed the audience. “We’re all here because it’s 2016 and we all know water is a precious resource.”

Bye said she plans to introduce a bill to address future situations that may impact the state’s water supply. “We shouldn’t be giving a discount, and taking infrastructure we’ve invested in, and selling it for a profit,” she said.

In addition, Bye would like the bill to address restrictions that do not apply to industrial users in the event of a drought until reservoir levels are extremely low. Transparency issues should also be addressed in the bill, Bye said. “If there’s this kind of proposed development, the town needs to give notice to its residents,” Bye said.

According to Halloran, the MDC does have discounted rates that apply to major users. Other water companies do the same thing, he said. The MDC’s discounted rate of 18 percent would apply to any user of more than 450,000 gallons per day. No current customers meet that threshold as of now, Halloran said.

According to Halloran, the sale of 1.8 million gallons of water per day to Niagara would result in a decrease to other customers of approximately $0.10 per ccf. That works out to approximately $10 per year for the average residential user.

Halloran also clarified the drought trigger levels, set in conjunction with the Department of Public Health (DPH) and other state agencies, that would require water restrictions. At 75 percent reservoir capacity, municipal users are requested to cut back on non-essential operations, at 53 percent lawn sprinkling is banned between 7 a.m. and 8 p.m., at 40 percent large and unusual consumption is monitored through special meter readings, and at 27 percent cutbacks for industrial operations are planned in conjunction with the DPH and local chambers of commerce. At 10 percent capacity, designated industrial operations are cut back.

According to MDC documents, the worst drought in recent history was in 1965 when reservoir levels fell to 42 percent capacity. Halloran said that the MDC’s calculations do not take the potential impact of climate change into account.

The MDC’s document “Water Supply Facts,” which contains the calculations Halloran quoted and was distributed at Monday night’s meeting, is available by clicking here and included as a PDF below.

Several members of the West Hartford Town Council, including Beth Kerrigan, Ben Wenograd, and Chris Williams also attended Monday night’s meeting. All expressed interest in fact-finding. “The issue in fact is that there’s been no notice – no opportunity for meaningful deliberation,” Williams said.

The plan has not been finalized, Green said. “The land has not been sold to Niagara as of now. There’s still time,” Green told the audience, adding that Niagara has backed out of other deals because of public outcry.

Green wrote to all who had supplied email addresses Monday night informing them that there is an MDC District Board meeting on Wednesday evening at 5:30 p.m. at 555 Main St., Hartford. The public is permitted to comment on the agenda item regarding the renewal of the CEO’s contract, and she and others are planning to attend and request that the board not renew Jellison’s contract or at least hold off on a “decision until the Niagara issue is reviewed in detail.”

[Editor’s Note: The potential cost saving to an average residential customer if the MDC sells water to Niagara was originally stated at $7.00 per user, and has been updated to $10.00 per user.]