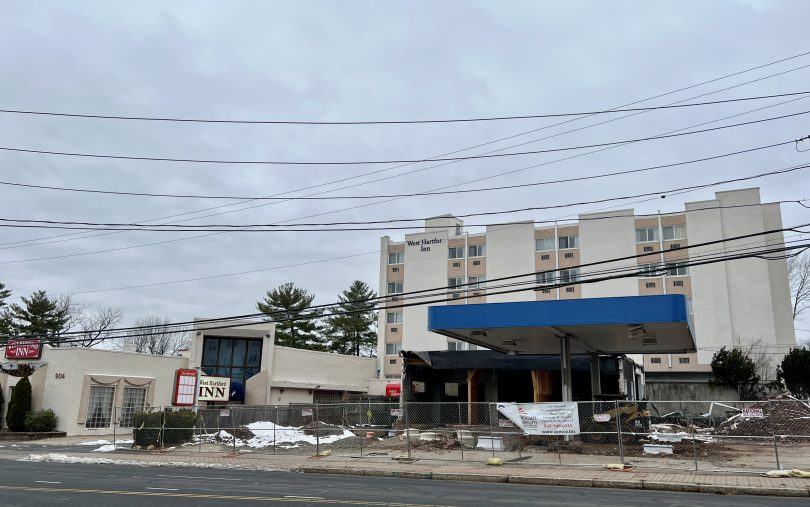 The renovation of 900 Farmington Avenue into affordable housing would be an example of the type of project to which the grant funds would apply. Photo credit: Ronni Newton

The West Hartford Town Council voted unanimously in favor of using $6 million of the town’s American Rescue Plan Act (ARPA) funds to a program that will support the construction of more affordable housing.

The Town of West Hartford is looking to increase its stock of affordable housing, and last week the Town Council unanimously approved the allocation of $6 million in American Rescue Plan Act (ARPA) funds to support that goal.

“The Council has asked us to continue appropriating the funds in ways that will have positive impact for years to come,” Town Manager Rick Ledwith said. The town has been directly allocated roughly $25 million in ARPA funds – plus $12 million as a share of Hartford County funds – and until now has committed $14.4 million, Ledwith said.

ARPA funds must be obligated for eligible uses by Dec. 31, 2024, uses that include: “a municipality’s response to the public health emergency or its negative economic impacts, including expenses related to the mitigation and prevention of COVID-19; improvements to public outdoor recreational spaces; increase affordable housing options; and investments in water, sewer or broadband infrastructure.”

Municipalities are being encouraged to use ARPA funds for rehabilitating affordable housing, Ledwith said. Statewide, only about 1% have been allocated for that purpose, but in approving the resolution, West Hartford will be using 16% of its funds to support affordable housing.

“We are and should be an example for the rest of the state,” said Councilor Ben Wenograd, who along with Mayor Shari Cantor has been a strong supporter of the resolution to create an Affordable Housing Support Plan. “Everybody talks about it. We’re actually doing something,” he said.

West Hartford’s 2020-2030 Plan of Conservation and Development recommends increasing the availability of affordable housing – which currently totals 7.8% of the town’s housing stock. To reach 10%, which is the goal of the town as well as the state, an additional 600 affordable housing units must be created.

The 540 New Park mixed use development, nearly completed at 540 New Park Avenue, has 41 of its 52 designated for those who earn no more than 60% of the AMI. The transit-oriented development is a project being developed by Trout Brook Reality, and will be managed by the West Hartford Housing Authority.

The proposal by the Arapahoe Group, which the Town Council will consider on Wednesday, will set aside four of the 25 apartments at 75 LaSalle, deed-restricting them for 40 years for those with incomes at 80% AMI. According to the most recent data produced by the Connecticut Housing Finance Authority (CFHA), 80% AMI translates to an annual salary of $63,120 for one person, $72,160 for two people, $81,200 for three people, and $90,160 for a household of four people.

Ledwith said the $6 million in affordable housing funds will be rolled out similar to the town’s nonprofit and small business grant program, which also uses ARPA funds, and will be available as a grant or a loan. The latter would allow the program to have impact farther into the future. Any one project could be eligible to receive up to 50% of available program funds – up to $3 million.

To be eligible for the program, at least 20% of the units in a new project must be deemed affordable. As applications are considered, preference will be given to projects that include a greater percentage of affordable housing, those that specify a greater affordability level, and the number of years the deed restriction lasts. Cantor suggested adding “energy efficiency” to the criteria.

Most of the projects that have been constructed recently in West Hartford specify affordable housing at 80% AMI – which many call “workforce housing”  – but this program will encourage a base of 65% of AMI. The program will also consider whether or not units are designated specifically for seniors, veterans, and the disabled, as well the proximity to transportation, schools, and other facilities.

Connecticut law 8-30g, which was adopted in 1990, pushes municipalities to have 10% of their housing be affordable by allowing developers to bypass certain local zoning requirements if a proposed project has more than 30% of its units deed-restricted as affordable. Thus far, there have not been any development applications in West Hartford that have used the 8-30g law, but it has been used extensively in Fairfield County towns like Greenwich.

Deputy Mayor Liam Sweeney said he is “particularly excited about the loan provision that would push this further forward,” as well as including housing vouchers as a part of the program. “This is one of the best pieces of policy that I have been able to vote on.”

“Affordable housing is very important for me, and to have diverse housing options … I know so many people who could benefit from this,” Council member Alberto Cortes said.

“I’m certain that we this will be another reason that West Hartford will be at the top of the list when we review this in a decade,” Councilor Leon Davidoff said.

The town is in the process of reviewing a site plan application by WHI Camelot LLC to transform the property at 900-904 Farmington Avenue – the West Hartford Inn and the former Los Imperios restaurant – into 44 units, 80% of which would be at some level of affordability.

“The town’s designation of a portion of their unused ARPA funds to support affordable housing is an important step to helping solve or create new affordable housing,” Lewis Brown, principal of WHI Camelot LLC, told We-Ha.com.

The town allocating $6 million in funding is very much welcomed by Brown, who is the founding member and managing partner of Honeycomb Real Estate Developers, which focuses on developing affordable and mixed income housing. “As a developer of affordable housing, Honeycomb can participate in the use of these funds,” he said. The 900-904 Farmington Avenue project could qualify as eligible for the program.

The town also learned last week that its application for a $998,000 brownfield grant to remediate environmental contamination on the Farmington Avenue property had been accepted.