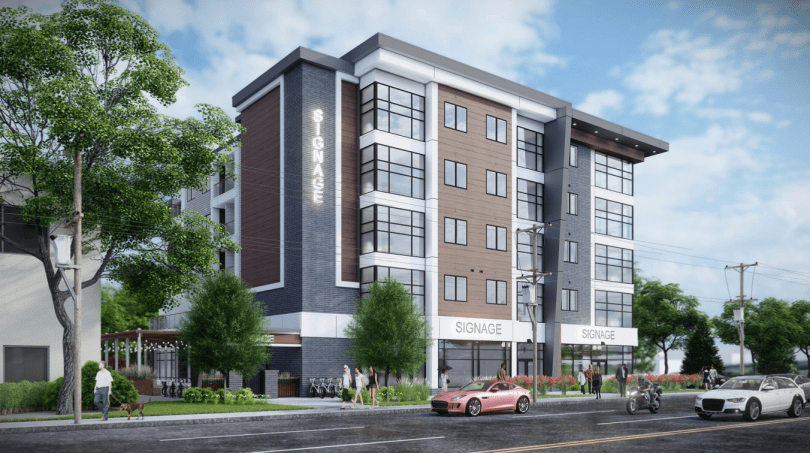 A proposal by Farmington Avenue Acquisitions LLC for 920 and 924 Farmington Ave. received unanimous approval from the West Hartford Town Council Tuesday night, and work on the site will begin this winter. 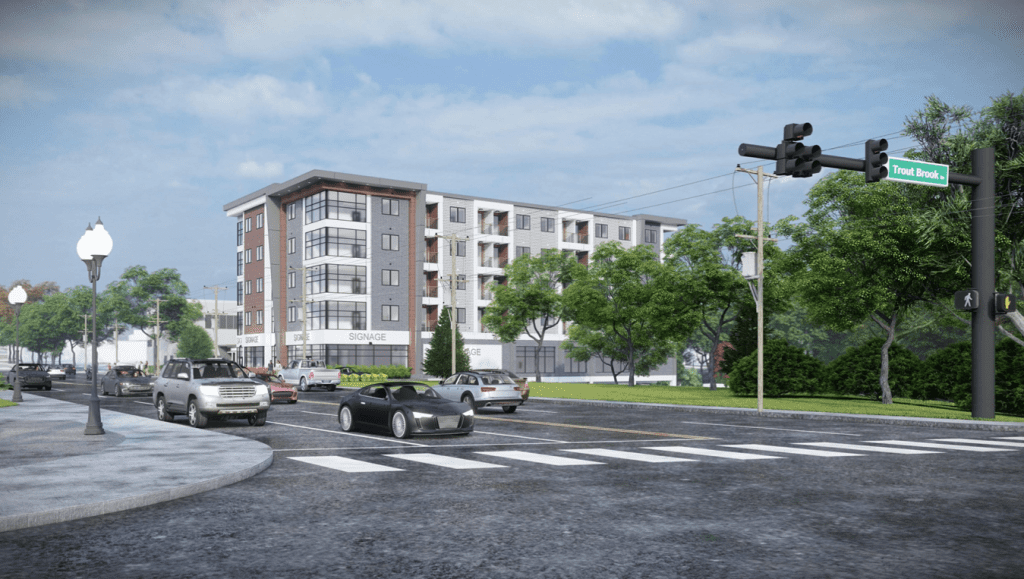 The West Hartford Town Council gave a unanimous vote of approval to a project that will transform a key corner at the gateway to West Hartford Center, replacing two outdated and functionally obsolete office buildings with a mixed-use residential and commercial building that will will include 48 apartments and support the concept of “new urbanism.”

Brian Zelman and Avner Krohn, two of the principals of Farmington Avenue Acquisitions, said Wednesday morning that the existing buildings on the site are already vacant and they are excited for the construction to commence. 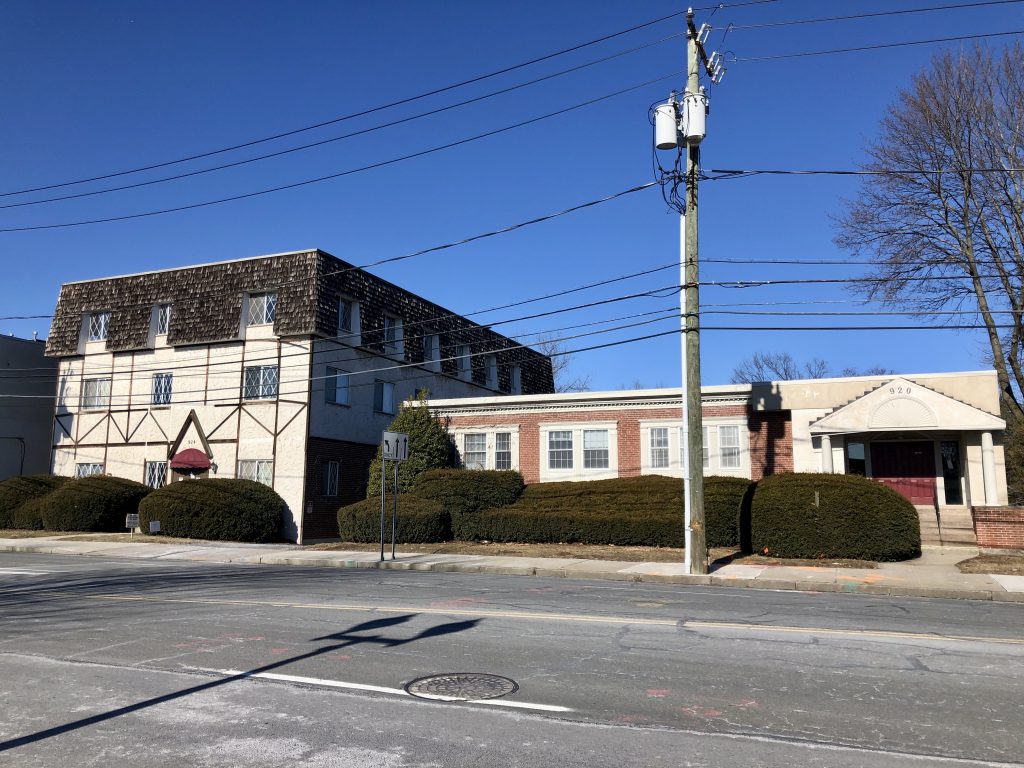 “We will start with asbestos removal in a few weeks,” Krohn said. “We have already filed with the state.” While the remediation is underway, they plan to file for demolition permits with the goal of beginning full-out construction by June or July. The goal is to have the building ready for occupancy by 2023.

Zelman said the branding for the project, including the name of the building, is being finalized and will be announced in the next few weeks.

The project will add to West Hartford’s grand list. When complete, the development is estimated to generate $300,000 of annual tax revenue to the town, as compared to the roughly $60,000 the existing property has been generating.

“This is a very, very exciting application,” Mayor Shari Cantor said prior to the vote on the proposal. “I am really happy to be at this point. This has been a long time in progress,” she said, thanking all who have been involved in the process.

“This is truly a new urbanism development,” she said, making use of existing amenities in the neighborhood, with accessibility to Trout Brook Trail, and will be a gateway to the Center.

“We really want people to populate and walk, and be a part of the community,” she said, and the project is a big step in that direction and will provide West Hartford with additional housing options.

While this project will be primarily market-rate, two units that will have a 20-year deed-restricted commitment to workforce housing, reserved for those earning no more than 80% of the Area Mean Income (ARI).

“We tried very hard to do as much as possible … which ended up being the 2 units,” Zelman said, noting the economic challenge and feasibility when dealing with a property that is less than an acre.

“One way for more affordability is to add inventory,” Cantor said. 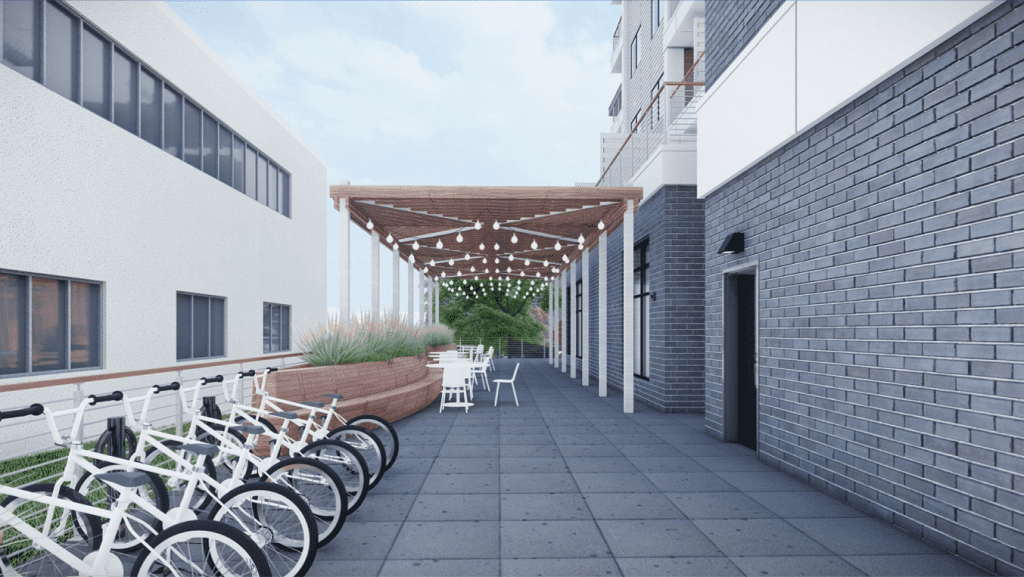 Other Council members also voiced their strong support for the project before voting.

“This is really encouraging to see,” said Deputy Mayor Liam Sweeney, noting there is about to be a “spurt in development in that area.” Earlier Tuesday, Kingswood Oxford announced their plans to sell the property currently occupied by the Children’s Museum to Continental Properties, which plans to construct a luxury rental development on the site.

Sweeney also commending the developer for taking what’s not a huge step in adding affordable housing, but is still a step with the including of the workforce units.

Democratic Council member Carol Anderson Blanks said she’s excited that there is development all over town, that several of the development partners in this project are residents with “some real skin in the game,” and that there is some element of affordable housing included.

She also commended the project’s accessibility to the Trout Brook Trail and bus routes, and providing outdoor space on the patio and balconies. “I just think this is a home run, and quite a benchmark for all the developments that come after this … this is a true collaborative effort,” Blanks said. 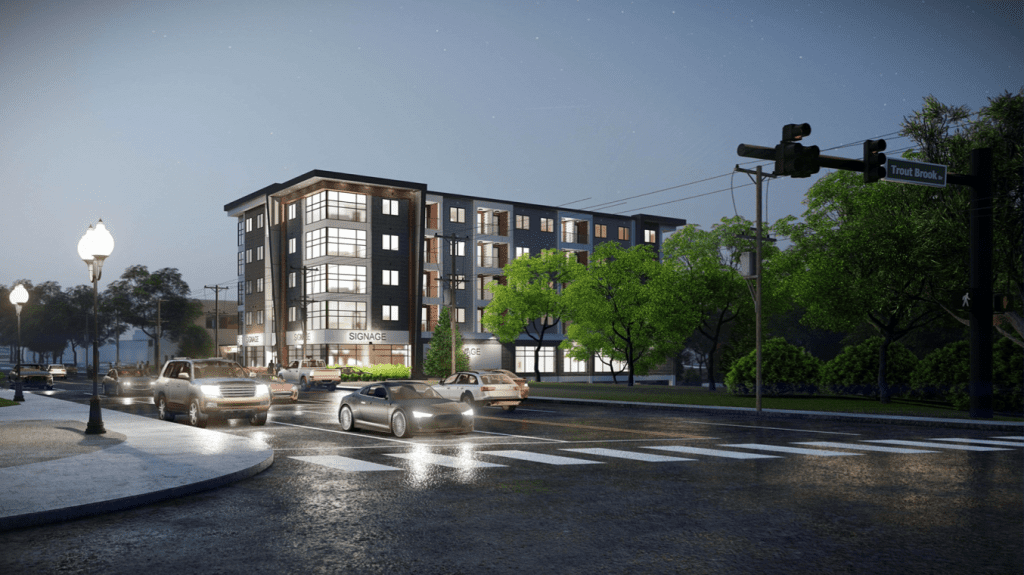 “This is what we need, we need to see more projects like this,” said Republican Al Cortes. “This is the perfect corner for this project.” Cortes said the only negatives he sees are that “workforce is not quite affordable,” and also that some of the parking is offsite.

“I hope that this is the first of many housing projects to come into our central business district,” said Democrat Leon Davidoff. “This is probably going to be a catalyst,” he said, noting the Kingswood project announced earlier in the day.

“As fully developed community, the only option we have is redevelopment,” said Davidoff. The existing buildings are “tired and obsolete,” he said, and this project is designed for the 21st century, not the past.

“I think this will be a landmark property,” Davidoff said, one that will be used as waypoint for directions. He noted that there was no request for tax abatement either.

The development, Democrat Ben Wenograd said, is “going to give us a great landmark.” He said he is excited that the developers are working to create the types of projects the town has envisioned.

The rental rates for this property have not been set, but regarding comments on social media regarding rental costs of other properties, Wenograd said “supply and demand actually works,” and adding to the inventory will control costs.

“This is not gentrification, it is adding to our housing stock,” he said, and will help our town grow and maintain affordability. 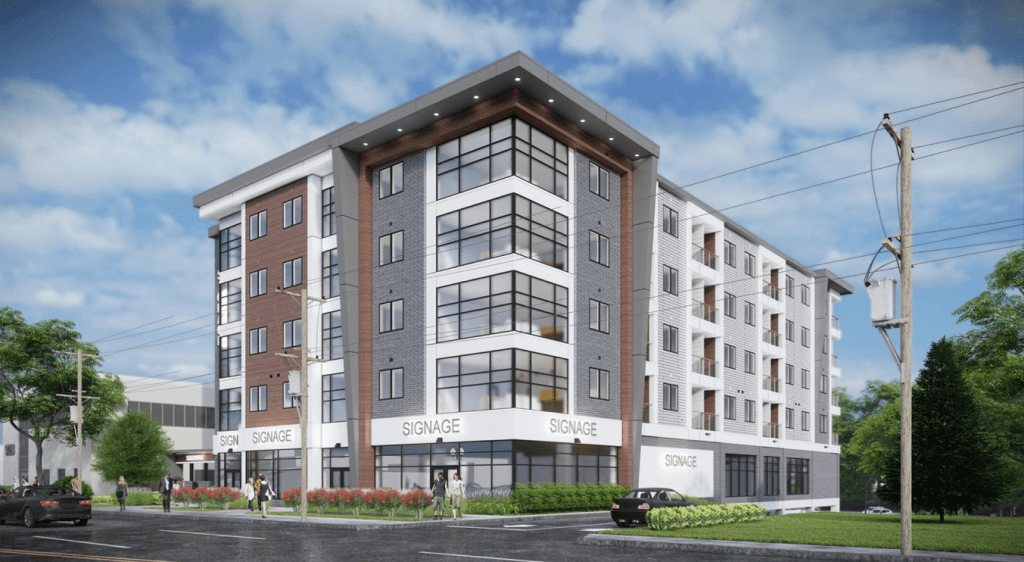 Farmington Avenue Acquisitions LLC purchased the two parcels, which total 0.98 acres, in the fall of 2020, and have been consulting with West Hartford’s Design Review and Advisory Commission for nearly two years as the project design has been underway.

Farmington Avenue Acquisitions is a partnership between Krohn and Zelman as well as Richard Korris, who is a West Hartford resident, and Zach Korris.

The team provided a detailed overview of the plans during a public hearing held prior to the Town Council meeting and vote.

“Adding more residential units to this area will promote an urban walkable environment,” said Zelman, who is a West Hartford resident and has an office in the Center. The location adjacent to the Trout Brook Trail, he said, is key, and the project is “the epitome of new urbanism” and supports the town’s 2020-2030 Plan of Conservation and Development goals of encouraging “infill development on vacant or underutilized lots,” mixed-use development, and projects that enhance walkability.

“My partners and I are committed to building something that will stand the test of time,” Zelman said during Tuesday night’s Town Council public hearing. The project has been designed based on the “anticipated needs of 2030,” and while they said there is not sufficient available space on the roof for installation of solar panels, there is a commitment to energy efficiency and state-of-the-art security. Eight charging stations for electric vehicles will be installed, and there will also be bike racks.

The building, which was designed by by Phase Zero Design, will include five stories, plus an underground level where there will be 21 covered parking spaces. The entrance and exit to and from all onsite parking will be accessible from a driveway on the east side (closest to Trout Brook Drive). In addition to the underground spaces, the remainder of the 57 onsite parking spaces will be in a surface lot, and the developer has also contracted with the town for reserved parking spaces in the nearby Isham Garage in Blue Back Square. Specific spaces will be assigned through the leasing process with a likely cost saving for residents who park offsite. 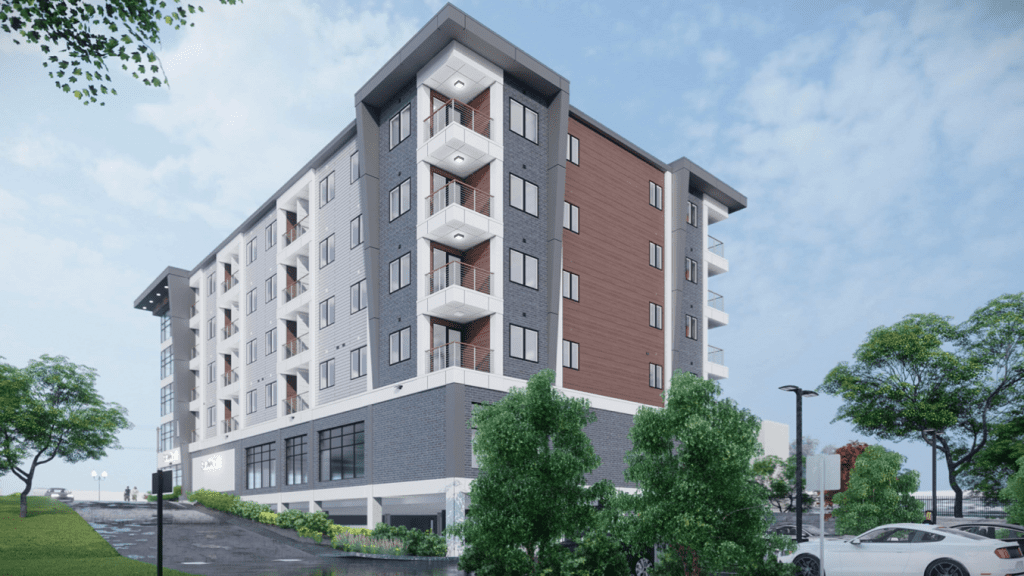 The goal, said architect Chris Milliard of Phase Zero Design, was to “design a building that reflects the excitement of West Hartford.”

The ground floor will include roughly 10,000 square feet of commercial space – and while the occupancy has not been  secured the developers said it will not be a restaurant, and the four residential floors will have identical layouts with a total of 48 apartments. Thirty-six of the units will be one-bedroom, and 12 will be two-bedrooms. There are balconies for all but the eight units that face Farmington Avenue, and a 2,000 square foot patio for use by the residential and commercial tenants along the west side of the building.

Avner, who has a number of projects under development throughout the Greater Hartford area, noted that this is a “high-end boutique building.” There is an extensive amount of steel being used, with expensive finishes on both the exterior and interior.

“Hearing the comments really reaffirms why we developed the project to be what was proposed and approved,” Zelman said Wednesday morning. “It’s the best project for the center of town,” what’s best for the location and the community and not just to satisfy a developer’s goal. 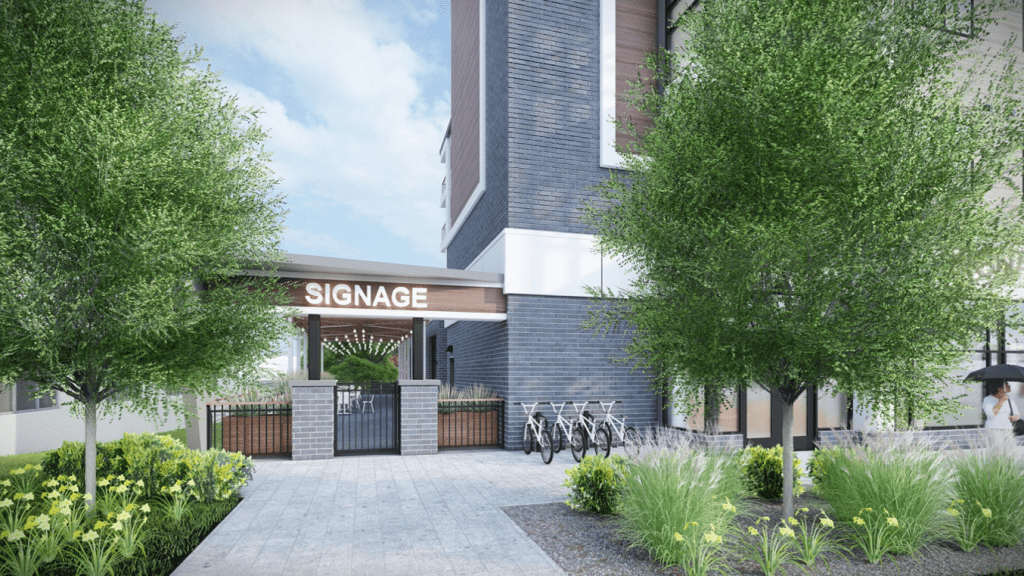 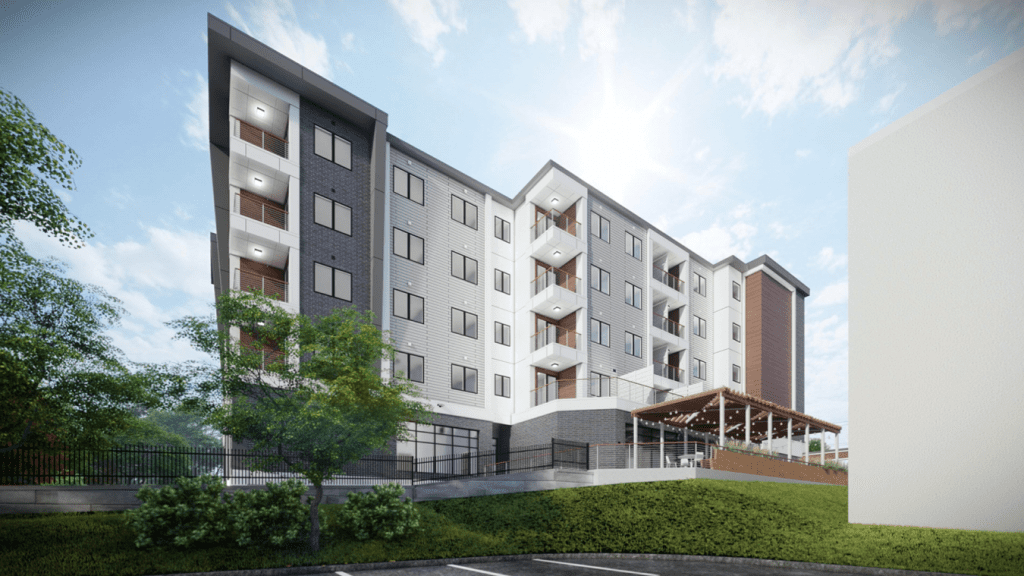 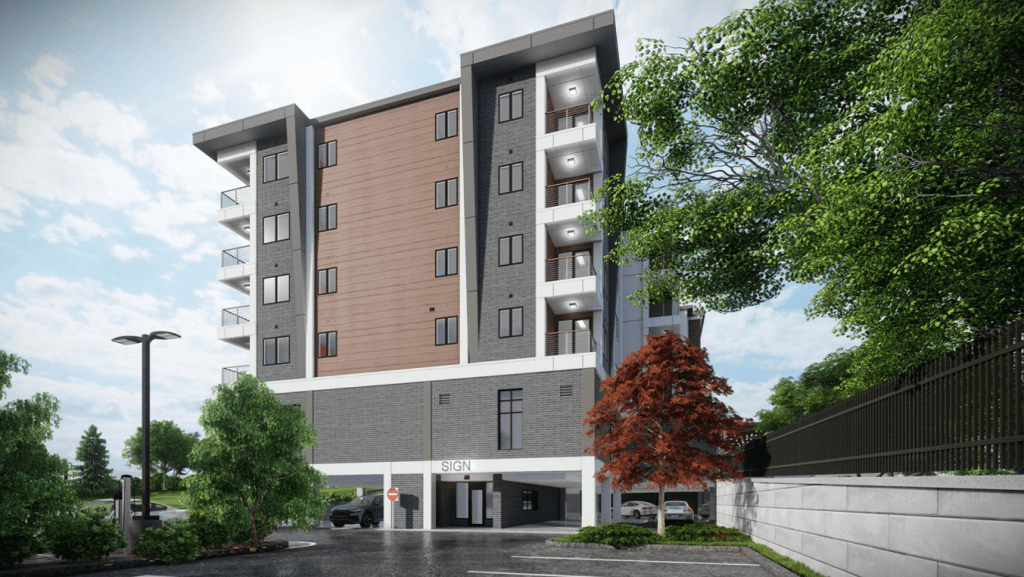