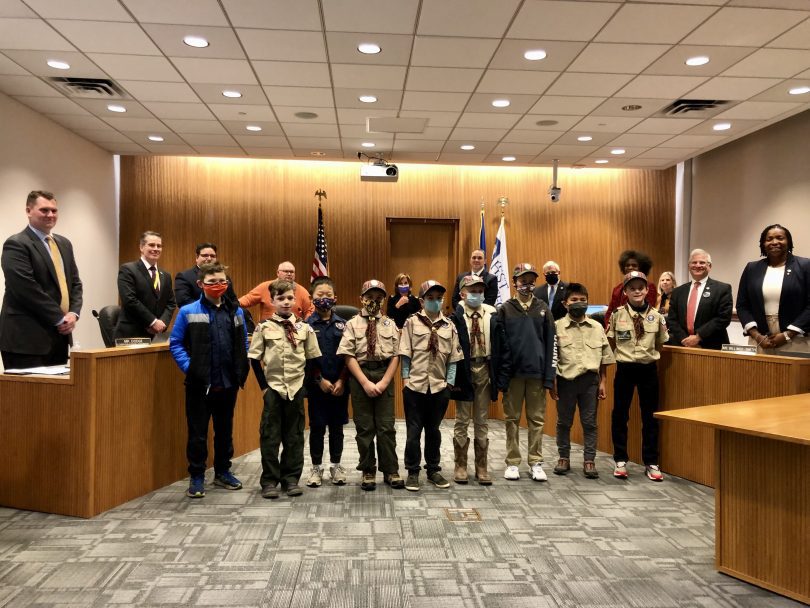 Webelos from Pack 145 pose with Town Council members after leading the Pledge of Allegiance on Dec. 14. Photo credit: Ronni Newton

A large portion of the funds to be used right away will be for flood mitigation improvement, police body cameras, and other public safety equipment.

The West Hartford Town Council voted unanimously Tuesday night to appropriate more than $6 million in American Rescue Plan Act Funds for a variety of items that will enhance quality of life in town as well as provide funds for projects that the town would otherwise be funding through taxpayer money.

At a meeting in late September, the Council’s Finance and Administration Committee began a discussion of recommendations made by Town Manager Matt Hart and town staff for possible use of the funds. As a whole, West Hartford will receive more than $37 million in ARPA funds – roughly $25 million for the town itself plus $12 million of a county allocation – plus West Hartford Public Schools is getting $10 million.

Current discussions by the Finance and Administration Committee focus on the $25 million grant to the town, half of which has already been received. At their most recent meeting, on Dec. 13, the committee agreed the items included in the $6,267,971 figure were ready to move forward and should be brought to the Council for a vote.

“Eligible uses are categorized in responding to the public health emergency or its negative economic impacts, premium pay for essential workers, reduction in revenue and investments in water, sewer or broadband infrastructure,” Hart said as background to the proposal he presented to the full Council Tuesday night.

Overall, the funds approved Tuesday will be used for projects that enhance cyber security and fund important public safety investments such as the purchase of body cameras for the police department, a mobile command vehicle ($375,000), and surveillance cameras ($500,000).

The body cameras for the police department were to have been purchased incrementally through the town’s Capital Non-Recurring Expenditure (CNRE) account, but instead the ARPA funds will cover the full $1,060,971 expense for the cameras and storage expenses over a five-year period. Police Chief Vernon Riddick told the Finance and Administration Committee that the surveillance cameras will be a “force multiplier” – something that will give police important information should an unfortunate event occur.

Some other uses of funds will be to provide public access to the internet in town parks as well as in the Center and Blue Back Square ($100,000), renovate the Buena Vista pickleball/tennis courts ($51,000), upgrade equipment at Veterans Memorial Skating Rink ($100,000), install self-service kiosks ($50,000), and pay for the expenses incurred by West Hartford Community Interactive in providing virtual meetings ($30,000).

The biggest ticket item is $3,200,000 for flood mitigation infrastructure improvements. That money will be used to begin the design, permit, and planning work for an extensive and critical multi-year project that will address flooding issues throughout town. According to Director of Finance Peter Privitera, the engineering firm the town has engaged to work on this project said it was important to begin as soon as possible to be able to utilize ARPA funds during the window that they are available.

A complete list of projects is included as a PDF below.

“These are items that we need to get moving right away,” Deputy Mayor Liam Sweeney said. Regarding spending for storm water and investment in public safety, he said, “this is a really strong way to get things moving with these funds” and to protect the community.

He also said he appreciated the bipartisan support for moving up the schedule to replace the Eisenhower Park pool.

The Council also unanimously approved an accelerated plan to replace the pool and bath house at Eisenhower Park. The cost will be paid with $2,500,000 from the town’s Capital Improvement Plan, financed through bonds. Funds that were originally included in the CIP for the flood mitigation project – now being funded through ARPA – will provide an offset to the cost for the pool and the bathhouse.

The pool failed this past summer and was not able to be used, and while planned replacement was a few years out in the CIP, staff would like to get the pool and bathhouse back online as soon as possible. Work will begin as soon as possible with plans to have the mew facilities ready for use by the 2023 season.

“I’m happy and pleased to see how we’re appropriating this money especially because we’re still in the middle of the pandemic,” Council member Carol Anderson Blanks said, noting that the plan is a really good use of the resources.

“All of these projects are shovel ready,” Council member Leon Davidoff said. Going forward communities across the country will be judged on how they use American Rescue Plan Act funds – either for long-term investment or to fix a budget shortfall, and he’s pleased that West Hartford falls into the former.

Funding for WHCi, which “serves a very important role in our community,” is important, he said. And town surveillance cameras “would be another tool for our police department to utilize.”

“There is a significant responsibility on how we spend – invest – these ARPA funds,” Mayor Shari Cantor said. “We really want to make it easy to engage in public space” and internet access and self-serve kiosks will help, she said.

She noted that the mobile command vehicle – which is not a “tank” but rather a vehicle that will serve as a base for responders at an incident site – will be useful in emergencies and along with the surveillance cameras will make the community safer.

Before the Council approached the core business of the meeting, they also hosted the Webelos of Cub Scout Pack 145, who led the pledge of allegiance. 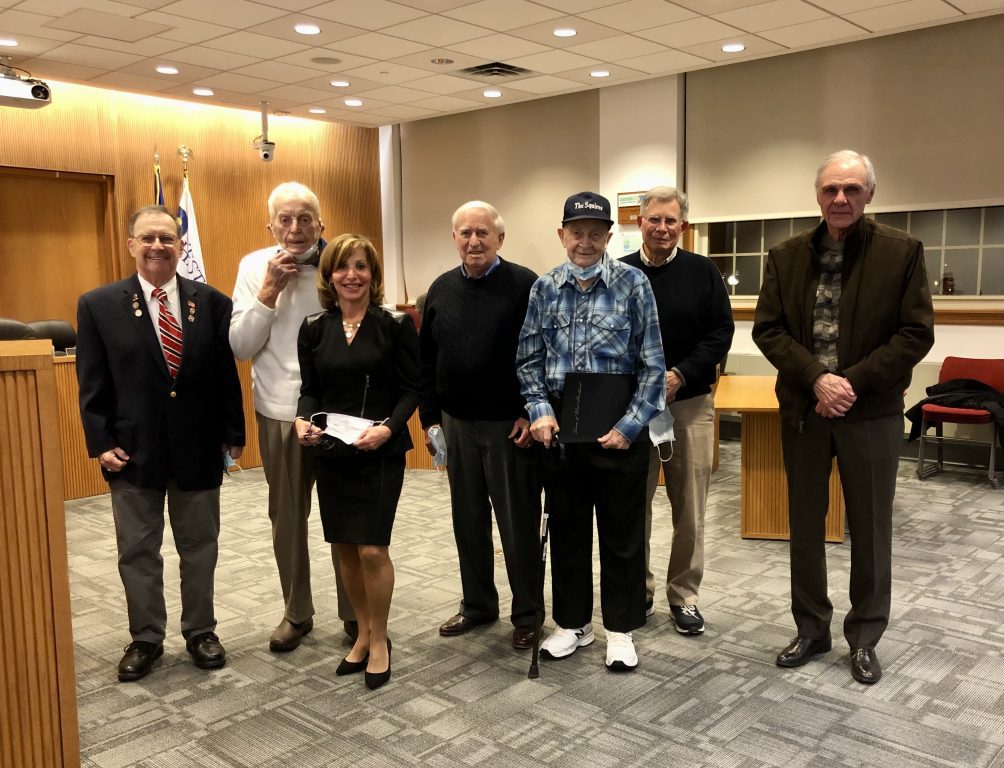 West Hartford Mayor Shari Cantor read a proclamation honoring the Squires who are ceasing operations at the end of the year and donated their remaining treasuring funds, more than $7,000, to the Town That Cares Fund. Photo credit: Ronni Newton

After more than 50 years in existence, the Squires, one of three social clubs for retired men in West Hartford, will be ceasing operations at the end of 2021. The remaining funds from their treasury, totaling $7,868.79, have been donated to the Town That Cares Fund, member Jeffrey Cole said.

The Council also received a new flag, that will be on display in Council chambers. Davidoff led the initiative to obtain a flag with the town’s current logo, and a second flag has been procured to be used at events. 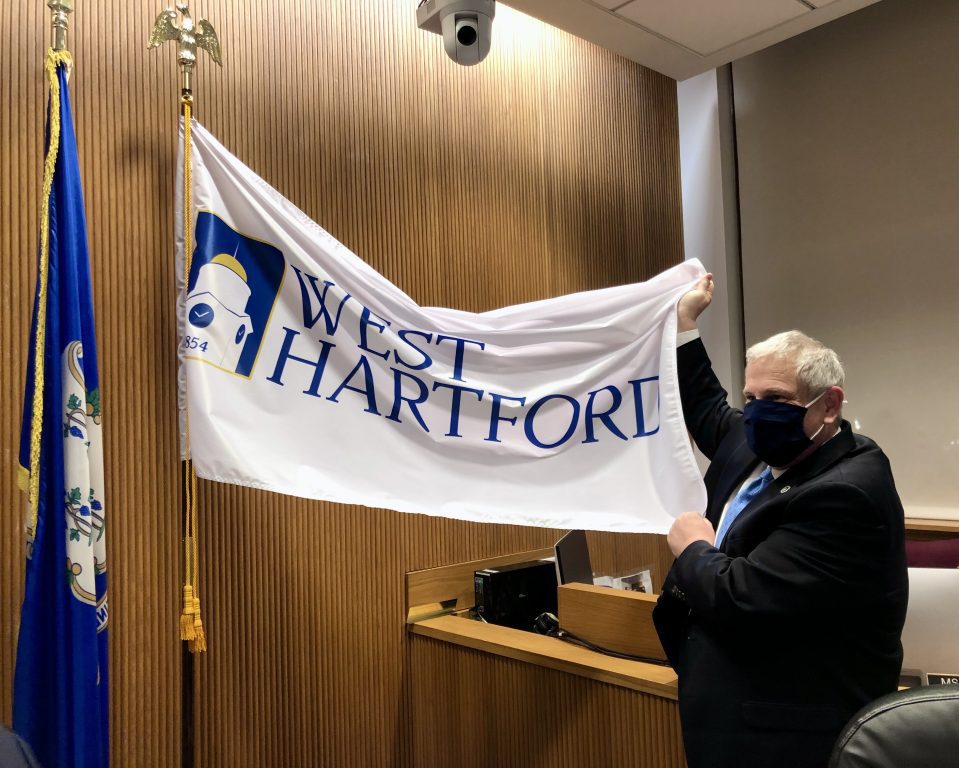