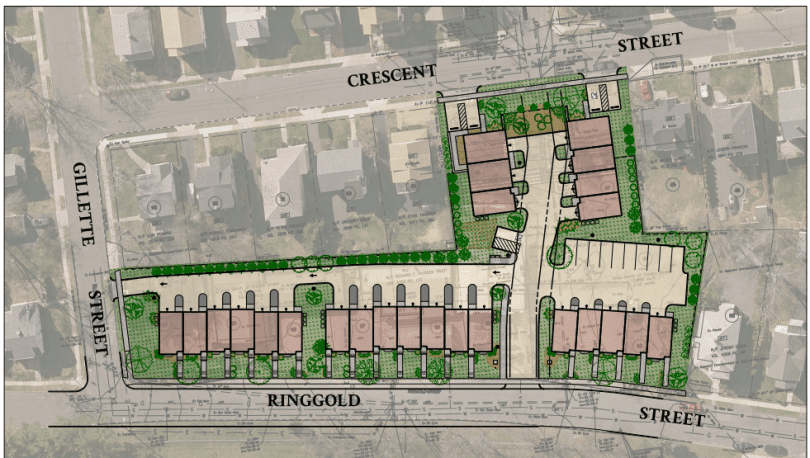 The 25-unit ‘Townhomes at Ringgold Estates’ development will be built on the former Patrissi Nursery property on Ringgold and Crescent streets. 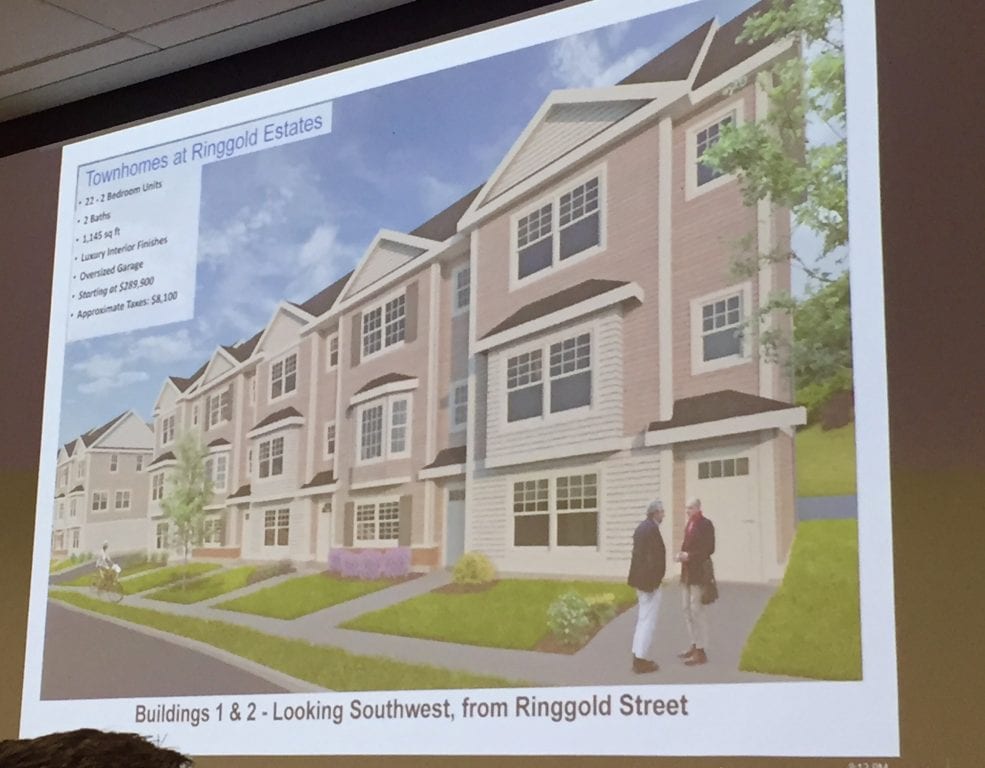 Townhomes at Ringgold Estates rendering of buildings no. 1 and 2. Photo credit: Ronni Newton

The West Hartford Town Council voted 7-2 on Tuesday night to approve a Special Development District (SDD) application from Ringgold Crescent Partners LLC to construct a 25-unit townhouse condominium development on the 1.33-acre parcel in the Park Road neighborhood that was formerly occupied by Patrissi Nursery.

The nursery closed for the season at the end of 2015 and never reopened the following spring, and the property has remained vacant.

The Townhomes at Ringgold Estates will incorporate parcels at 35 Ringgold St. and 34 Crescent St., with an entrance and exit on Ringgold Street. There will be an exit-only driveway onto Gillette Street on the south side of the property. 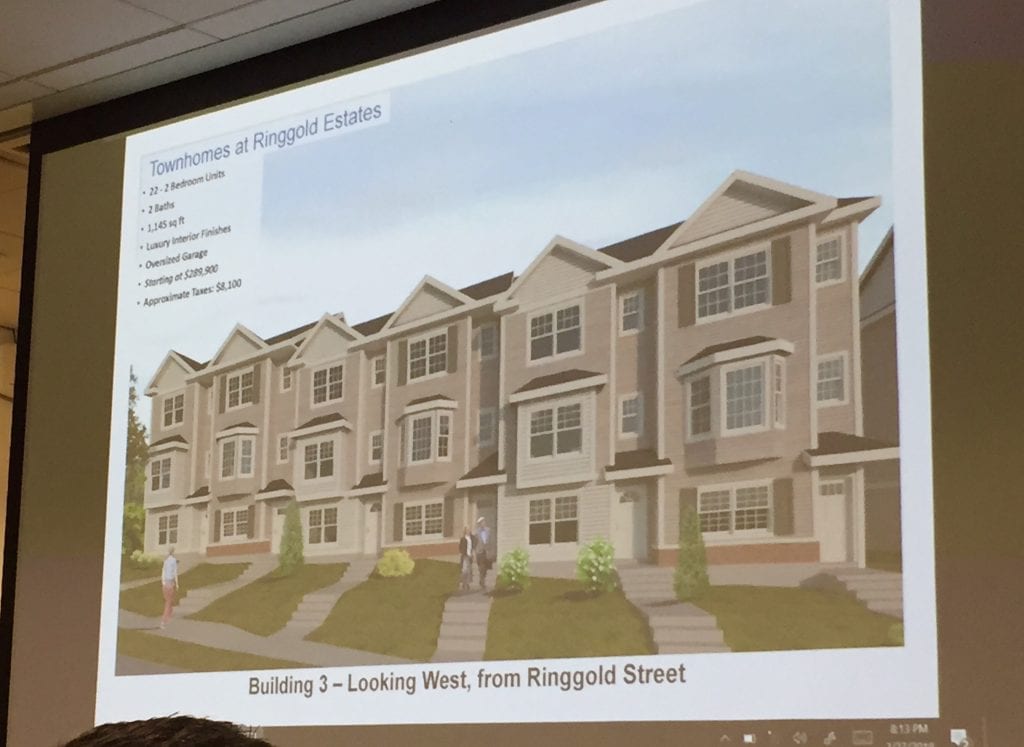 Most of the 25 units in the development will be 1,145 square feet with two bedrooms and two bathrooms, on two levels, but three handicapped accessible units will be 1,410 square feet with three bedrooms and two bathrooms. Each unit will have a 32-foot deep garage underneath it, and a total of 40 parking spaces are part of the proposal, not including driveway space in front of each unit’s garage.

Townhomes at Ringgold Estates rendering of buildings no. 4 and 5, which include the three larger handicapped accessible units. Photo credit: Ronni Newton

Patrissi Nursery was a commercial occupancy, but was a non-conforming use of the property that had been in place before the zoning codes were developed. Multifamily housing could have been built on the site without applying for an SDD, Attorney Robin Pearson, who represented the applicant, told Town Council members at a public hearing that preceded the meeting and vote.

“Frankly I think you might want to keep this in mind as you consider this,” Pearson said at the public hearing. She said that the project has been approached as an SDD because of the “desire to create a better development” or it “could have been approved ‘as of right’ by the town planner.”

“Their intent is to bring forth a development that is worthy of West Hartford, a high quality residential development,” Pearson said of the developers, and one which will be a significant investment in the town that is in harmony with the area.

Brandon Handfield from Yantic River Consultants outlined the changes in standards being request of the Town Council, one of which was a reduction of the setback from 23 feet to 17 feet along Ringgold Street. He said that the shift to be closer to Ringgold Street was a suggestion of the Design Review Advisory Committee (DRAC) to be more consistent with the setback of existing residences on the street.

Other requested changes include a reduction of the setback of side yard on the north side of the of the development from 16.7 feet to 14.2 feet, and another minor side yard reduction from 15.6 feet to 15.5 feet.

The minimum distance between buildings, according to town ordinance, is 50-75 feet, but the distance between buildings no. 2 and no. 3, which front Ringgold Street, will be just 18 feet. The developers originally considered having just one long building in that space, but broke it up on DRAC’s recommendations for more “air and space” between them.

The application also requested a sign setback of just 10 feet, rather than the required 15 feet, and two brick pillars on either side of the driveway entrance on Ringgold Street. Although there will be two signs rather than the zone’s permitted single sign, the total area will be less than what zoning allows for a single sign.

A more significant change requested was to the open space requirement, which is 5,000 square feet, and was a topic of concern to several of the Town Council members.

The proposal outlined by Handfield stated that as open space for the development Ringgold Estates would include a paver patio, with a fire pit and grill area, measuring 550 square feet. The intent is to use Kennedy Park, which is in close proximity and can be accessed from the end of Ringgold Street, to satisfy the remainder of the open space requirement. The developer will build new sidewalk and pedestrian access to the park.

Following discussion and at the urging of Council members, Lovely said that he would be willing to remove the fire pit which was of concern to several parties, including Crescent Street resident Ryan Tangney who spoke at the hearing and said it would be essentially right in his backyard. The fire pit was also one of the concerns that others had voiced to Chuck Coursey, who did outreach to property owners and residents within 500 feet of the parcel on behalf of the developer.

Lovely also agreed to Council request to not only provide sidewalk access to Kennedy Park, but also provide landscaping and perhaps a stone pathway to improve the entrance to the park, subject to Town Planning and Zoning approval.

As part of the application, the Ringgold Street roadway will be narrowed by five feet and a four foot-wide sidewalk will be constructed on the west side leading to Gillette Street, connecting to 20 extra feet of sidewalk that the developer will add on to Gillette.

The open space requirement could perhaps have been satisfied within the complex by adding vestibules or porches, Lovely said, but that would have invited clutter in those spaces and would not have overall been as attractive.

In all 10 residents spoke at the lengthy and detailed public hearing that preceded the meeting, and many raised concerns about addition traffic that would be generated by the 25 units.

Anne Hess said she has lived on Gillette street for 25 years, and said there is already concern about traffic flow and the traffic pattern of people using Gillette as a cut-through from Oakwood Avenue to avoid traffic on Park Road. “That’s a concern, it’s an ongoing concern. I think with increased traffic from the development it’s going to be exacerbated,” Hess said. She also expressed concern that the “no parking” signs on the south side of Gillette are already ignored, and wondered what might happen if the units don’t sell for the price point set by the developer.

Sarah Kieffer, who lives on Ringgold Street, noted that the intersection of Rinngold and Park Road is already difficult for drivers, and she avoids exiting there, as do many others.

“This, at 25 units, is going to be a very minor generator of traffic,” Pearson told the Council. She presented the traffic report on behalf of Bubaris Traffic Associates, which conducted the study but could not attend the hearing. “The amount of traffic that is going to be generated by this is significantly less than what we had with the Patrissi nursery for 70 years,” Pearson said.

John Paindiris, owner of Effie’s Place at 91 Park Rd., spoke at the hearing strongly in favor of the project. “It’s my opinion that they have designed a nice residential area without pushing density to its limits,” he said. The development will have access to restaurants, a bus line, and entertainment, all within walking distance.

“We are looking forward to foot traffic on our part of the street,” said Paindiris, speaking as a business owner as well as the co-president of the Park Road Business Association which will benefit overall by residual improvements to other properties. He added that the late Richard Patrissi, who was a longtime friend, was looking forward to having the property developed in the future and would likely approve of the proposal.

Patrissi, whose family owned and operated Patrissi Nursery for decades, was unofficially known as the “Mayor of Park Road,” founded the Park Road Parade, and was always looking to improve the neighborhood. He passed away at the age 76 in March 2013, and the clock that stands in front of A.C. Petersen’s and Playhouse on Park was dedicated in his honor in October 2014.

Williams said that he wasn’t concerned about what could have been built on the property “as of right,” but rather that there were concerns with parking and traffic that could not be compared to a now-defunct seasonal business.

“This vote is a close call for me but at the end of the day what I heard is concern from adjacent neighbors of some factors that would be exacerbated by this development … I do not find the project to be in harmony with the overall neighborhood.”

Fay said that while she liked many things about the project, including the attractive design, she was concerned with the number of zoning exceptions that had been requested.

Deputy Mayor Beth Kerrigan voiced her support for the project, but she added that Council and town staff need to look into residents’ concerns about traffic and parking on Gillette and Ringgold streets.

“On a strictly zoning basis, I think everything adds up for this proposal,” Democrat Leon Davidoff said. Right now the site contains a very rundown nursery property that is non-conforming to the zone.

“Is it the best application that could possibly happen there? I don’t know that,” Davidoff said, but while a project could have been built on the site “as of right,” it would be a different type of project and greater density “would not make people happier.”

Davidoff said he was happy that the developer was willing to remove the fire pit from the application, and “has met their burden this evening of what they’re required to do with this zoning application.” He said he is confident that town staff will be able to address residents’ concerns about issues like parking, and that having the property as an SDD will protect the neighborhood because any changes to plans will have to be approved by the Town Council.

Democrat Ben Wenograd also voiced his support for the project, and was not concerned that it would increase traffic. “We’re talking about 25 units. Logic is that’s not going to have a large impact on the traffic,” he said.

Democrat Liam Sweeney said he was pleased that the whole community will benefit from changes the developer was willing to make to access to Kennedy Park.

Kate Farrar, a zoning alternate voting in place of Dallas Dodge who was absent, said had some concerns about the open space, but voted in favor of the application.

Minority leader Chris Barnes said the vote was a tough call, with valid concerns that had been voiced about traffic as well as the number of exceptions requested, and he waited to make his decision until after other Council members had expressed their thoughts. Ultimately he voted in favor of the proposal.

Mayor Shari Cantor voted in favor of the project, but said she appreciated the residents who came out and voiced their heartfelt concerns.

“Richard Patrissi would love this development and what he would love is the foot traffic on Park Road,” Cantor said. The waivers that had been requested mostly design changes prompted by DRAC to make the project more aligned with the streetscape.

To see the detailed plans for The Townhomes at Ringgold Estates, click here. 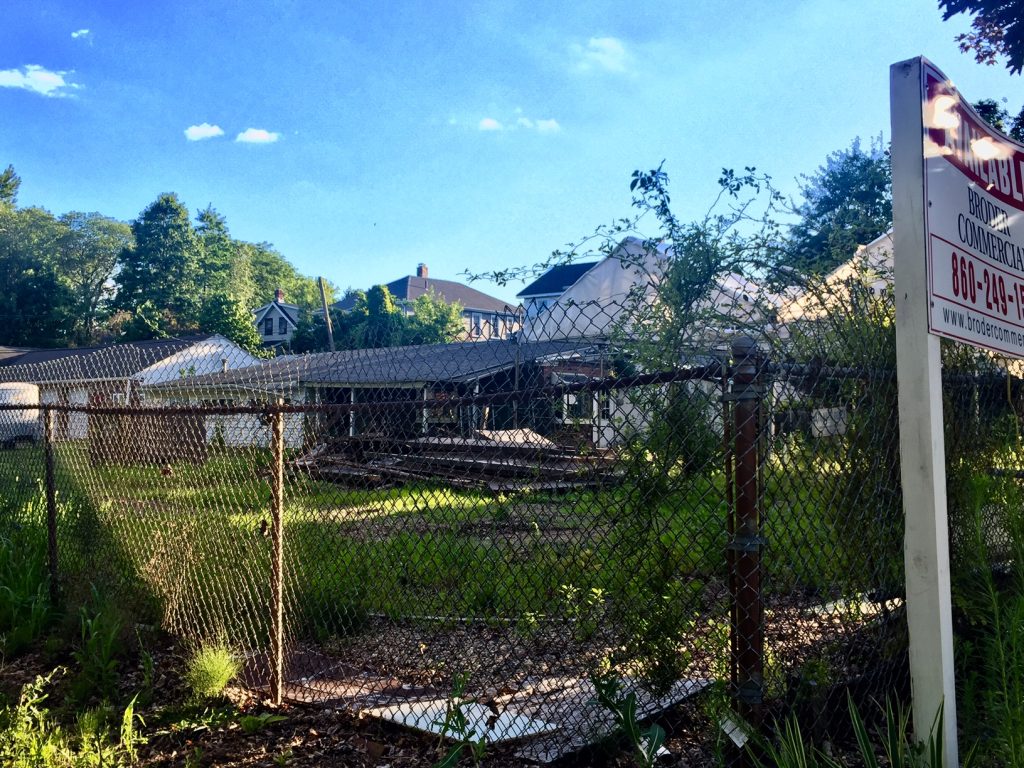