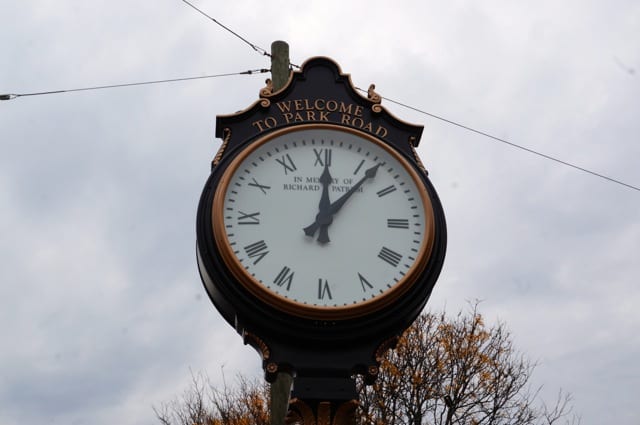 The stately clock, funded by donations from family, friends, businesses, and organizations throughout West Hartford, was unveiled Saturday following the Park Road Parade as a fitting tribute to the ‘Mayor of Park Road.’ 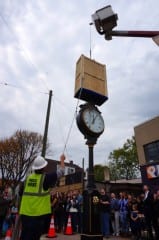 The cover is lifted off, revealing the face of the Richard Patrissi Memorial Clock. Photo credit: Ronni Newton.

At least 200 people gathered after Saturday’s 17th Annual Park Road Parade for the unveiling and dedication of a striking clock that will serve as a permanent memorial to Richard Patrissi – a man who gave so much of himself to improving the Park Road neighborhood as well as to the rest of the West Hartford community.

Johnny Pandiris, who is now owner of Effie’s Place, recalled first meeting Patrissi nearly a quarter century ago when he was 17 years old and working in what was then his father’s restaurant. Paindiris said Patrissi took him under his wing, and for years they worked together with many others to help build the area into the vibrant neighborhood it is today.

“He always wanted to have this clock. He talked about the presence it would create, but he never got there,” Paindiris said at the dedication.

Patrissi, who was known throughout West Hartford as the “Mayor of Park Road,” passed away at age 76 on March 7, 2013.

“It’s a little ironic and appropriate that I was introduced as the mayor, because Richard’s been kind enough to let me rent the title for a while,” said West Hartford Mayor Scott Slifka. “We all know that the real mayor, of Park Road and perhaps of the whole town, at least spiritually, has been Richard.”

Slifka said that when Patrissi passed away, countless people and organizations from throughout town immediately contacted him, wondering what could be done to honor a man who had given so much of himself, who rather than running for political office made it his priority to “stay on the street” and remain a “friend to all.”

The difficulty was finding the right tribute to Patrissi – one that wasn’t “about him,” Slifka said, but rather about the place that he believed in. “The lasting legacy of this won’t just be the clock, it will be all of us enjoying everthing that goes on on both sides of it because that’s the thing that will probably keep him happiest,” Slifka said.

Angelo Faenza was not only Patrissi’s partner in creating and leading the Park Road Business Association, but he was also a lifelong friend. Faenza could not hide the emotion in his voice as he told that crowd that he’s sure “[Patrissi] is looking down on us, and we’re following his dreams.”

A committee that formed just last spring was able to raise $25,000 in five months, from family, friends, businesses, and other organizations, to purchase the 15½-foot-tall Howard Two Dial 1890s Replica Street Clock. It is permanently situated at the crosswalk on Park Road in front of the Playhouse on Park and A.C. Petersen’s Restaurant. The clock has a 36-inch LED backlit dial, GPS satellite synchronization, and is constructed in black cast aluminum with gold accents. On Saturday it also sported a large gold bow.

The Park Road Parade was an event Patrissi started 17 years ago, and the committee chose parade day as the best time to dedicate the clock. 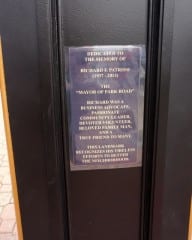 Director of Human and Leisure Services Helen Rubino-Turco read aloud the wording of the two plaques that are installed on on either side of the clock. (Wording is visible in the photos below.) One side includes the phrase: “We can hear him say ‘Meet me at the clock!'”

As members of the Patrissi family gathered in front of the clock and watched along with the rest of the crowd, a West Hartford Public Works crew used a boom to lift off the large wooden box that covered the clock.

Just a short while later, Mayor Slifka’s young daughter Betsy circled around the base playing with her grandfather, as if the clock had always been there.

Late Saturday evening, following a performance of “Angels in America” at Playhouse in Park, a theater-goer leaned casually against the clock, as if it had always been there.

Patrissi would no doubt be happy with West Hartford’s thank you gift.