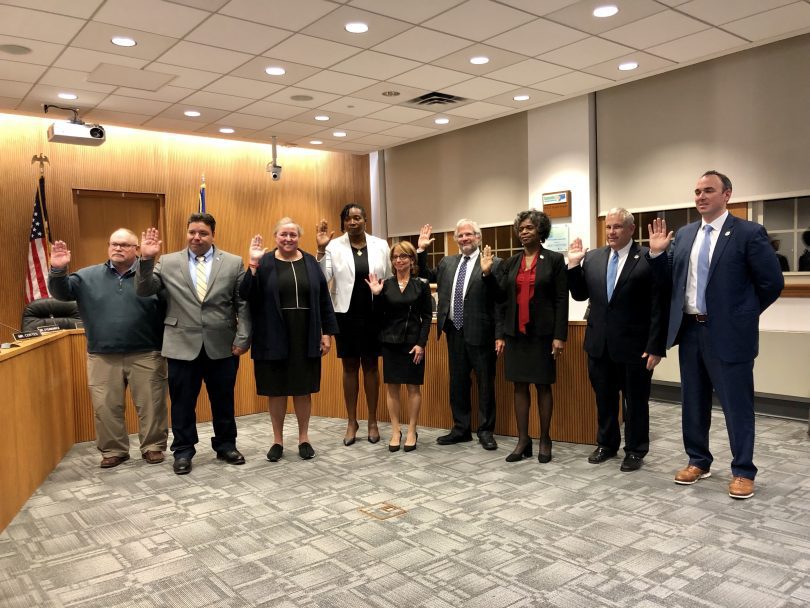 The West Hartford Town Council meet Tuesday night and re-elected Shari Cantor as mayor, while Liam Sweeney will be the next deputy mayor. 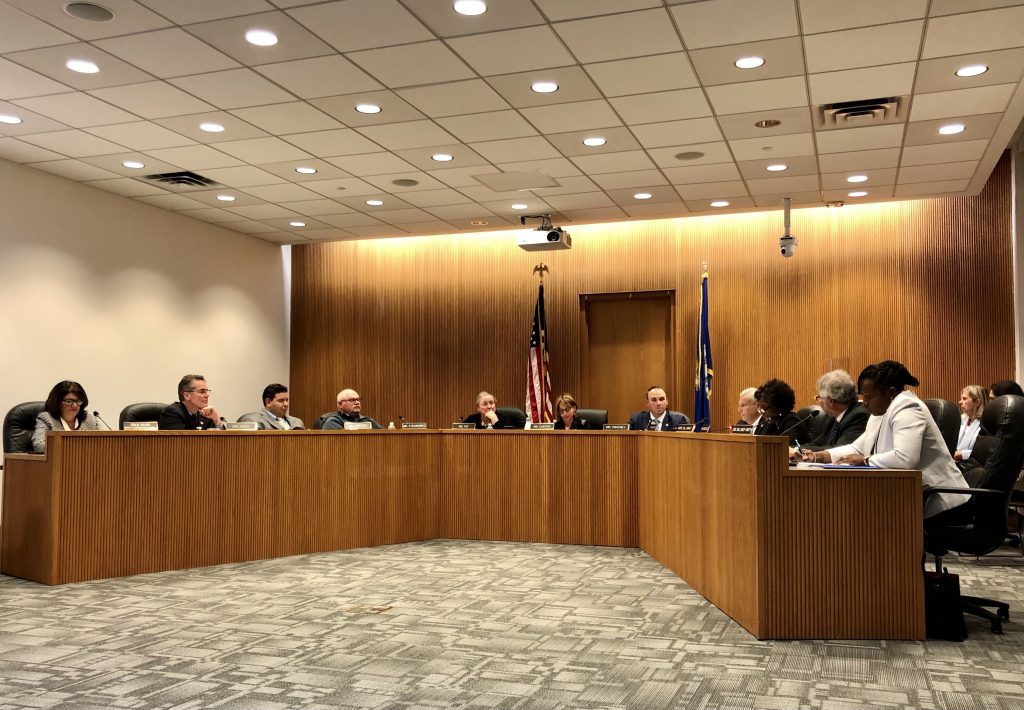 The agenda for the West Hartford Town Council’s Tuesday night meeting covered internal business only –  the election of its new officers and a swearing in – and prior to that members “roasted” their colleagues who did not seek re-election this fall, offering positive and heartfelt comments about their service to the community.

With unanimous support, Shari Cantor was re-elected president of the Town Council and retains the role of mayor for the 2021-2023 term.

Leon Davidoff, who has served as deputy mayor for the past two years, nominated Cantor on Tuesday night, and also nominated Liam Sweeney as vice president of the Council and West Hartford’s next deputy mayor.

The Council’s charter does not not mention anything about using vote totals in the election of its president and vice president, but Sweeney, who was first elected in 2017, received the second-highest number of votes from among the 15 candidates who ran this fall. Cantor received the most votes of any of the candidates.

Essie Labrot was reappointed as clerk of the Council.

Tuesday night’s agenda did not include any official business other than swearing in new members, electing officers, and announcing committee assignments. 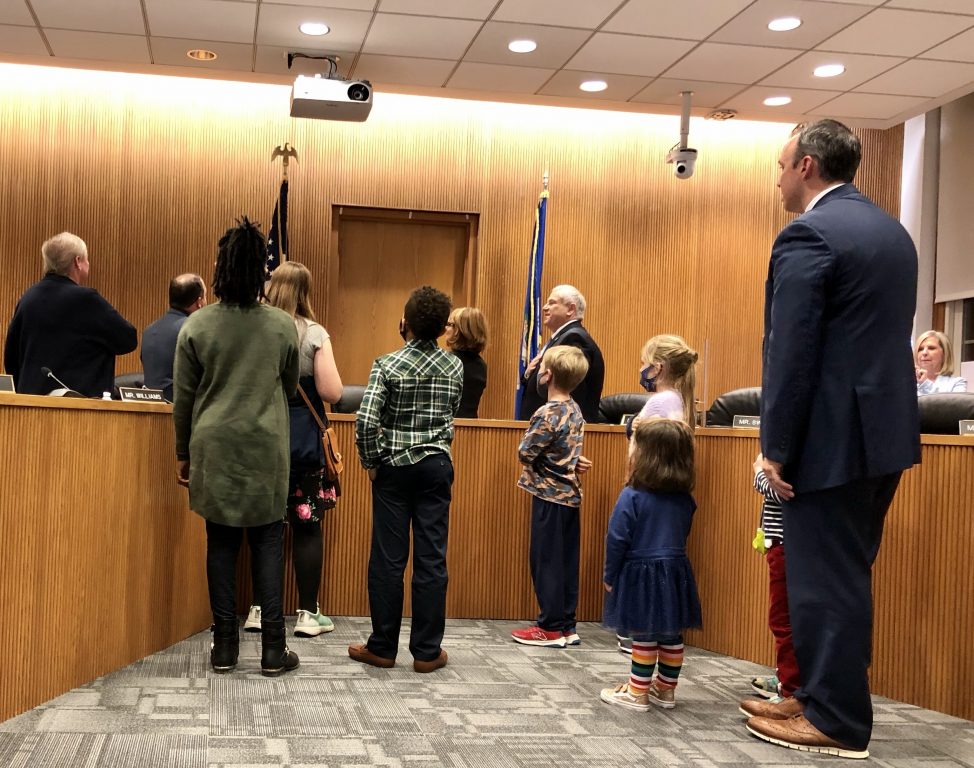 “A special welcome to our first Latino Council member, Alberto Cortes,” Cantor said as she accepted her re-appointment as mayor. “You’re making history.”

Cantor also noted that Zydanowicz, who has served for nine years on West Hartford’s Board of Education, is a “seasoned public official,” and Billings-Smith, while new to holding office, is not new to being a community leader and has been involved in many town activities including serving on the Human Rights Commission and founding Concerned Parents of Color. Both Cortes and Billings-Smith had been chosen as members of the newly-formed Civilian Police Review Board, but had to resigned those positions after being elected. 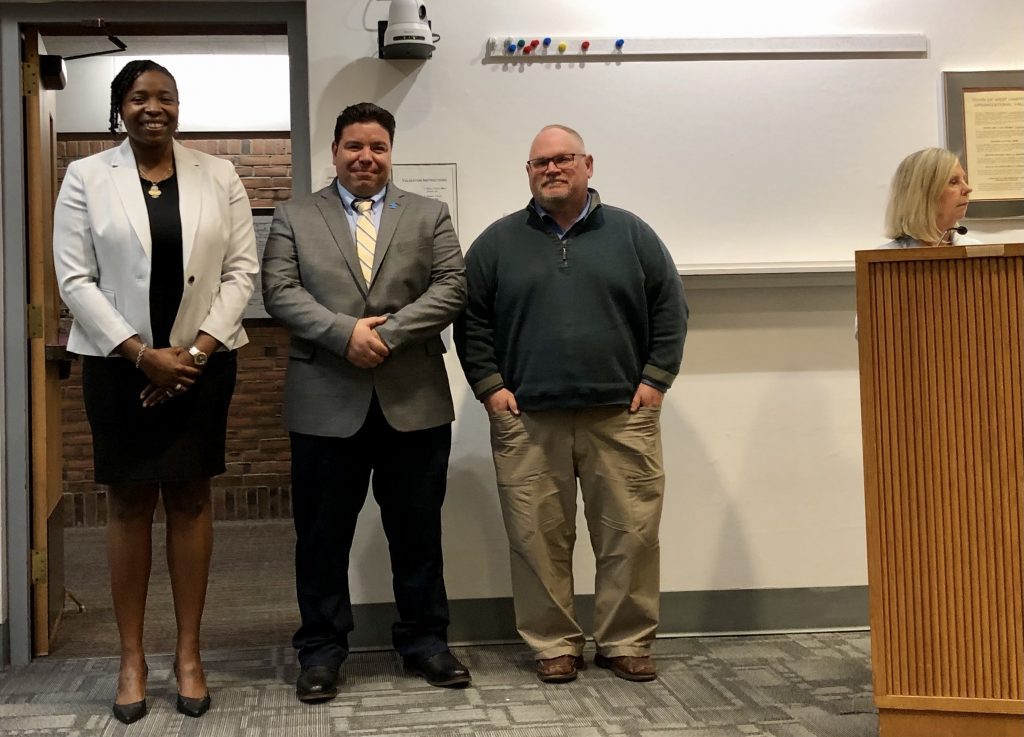 During the first part of Tuesday’s meeting, councilors Chris Williams and Lee Gold took their seats at the table for the last time, and received praise – as well as a bit of ribbing – from other Council members. Beth Kerrigan, who did not seek re-election, was not at the meeting.

“It was really a pleasure serving with you the past two years … a strange time to serve,” Wenograd said to Gold, who ran for the Town Council as part of a four-person slate of candidates representing A Connecticut Party, but did not win. “You did something brave this term. One of the greatest things an elected official can do is sacrifice based on a moral thing, your ethics,” Wenograd said. “That’s what public service is about.”

“Most of your term was during COVID, but what I appreciated about you is that you came to every meeting and you were prepared,” Sweeney told Gold. “Everyone appreciated your professionalism,” he said, and the ideas you had.

Although they both served as Republicans, Williams and Gold did not always agree, but “would agree to disagree and we would vet the issues,” he said. He praised Gold for how seriously he took the position, and his level of preparation and attention to detail. “You were the only person to ever correct meeting minutes,” Williams said.

“Lee and I are neighbors, and even though we won’t be colleagues this term we will still be neighbors, and friends,” Davidoff said. “I admire your willingness to stand up for your values,” he said. “I have a feeling tonight won’t be the end of your public service to the community.”

Cantor said Gold doesn’t only listen, he hears, and is always thinking about how to make things better. “He’s inspired by the opportunities in our community,” she said. “I am so really inspired by your courage to make a stand … and one that really wasn’t politically expedient to you.”

Gold told Williams that he has always appreciated Williams’ commitment to making West Hartford better for everyone, his appreciation for the town, and his convictions. “It’s truly an honor to be able to serve with you,” he said.

Davidoff said he has really enjoyed serving with Williams, who has distinguished himself as a logical thinker, and someone who has been considerate and kind. “While we often disagreed … our disagreement was professional, not personal,” Davidoff said. The highlight of their work together, he said, was crafting revisions to the drive-through ordinance that was approved unanimously.

“It’s tough to see you go,” said Sweeney, who has known Williams since they both played youth basketball in middle school.

“This is hard,” Fay said, her voice breaking. “If it wasn’t for Chris I don’t know if I would have made it through the first campaign. … You’re a great mentor and a role model.”

Blanks said she always appreciated that Williams “wanted to be sure we were good stewards.”

Wenograd said he and Williams were both elected six years ago, and bonded over hearing people refer to them as newbies. “We had a lot of fun with the fact that we disagreed about a lot of issues,” Wenograd said, joking that Williams was always wrong “and remarkably I was always right.” But he said in all seriousness that appreciated that Williams wasn’t grandstanding, but always presented facts which made the Council stronger for everyone.

“Thank you for being an example to a lot of people,” Cantor said. “You truly believe that what you stand for is in the best interest of the town … even if I didn’t agree with you I always respected you,” she said.

While Kerrigan was not present at the meeting, Cantor read a statement thanking her for her service. “Beth was a tireless advocate, fighting for the marginalized,” she said. Kerrigan and her wife, Jody Mock, led the fight for marriage equality in Connecticut, which was achieved in 2008.

“It has certainly been an interesting couple of years,” Gold said, thanking his family, other Council members, and town officials.

“I didn’t think I’d be getting a chair this soon,” he said, noting the commemorative wooden chairs given to outgoing Town Council and Board of Education members.

Gold said while he didn’t anticipate not getting re-elected, he will continue to keep his focus on the town, and also thanked West Hartford residents for their trust. “We have begun, and continue to fight hate in all of its forms,” he said, and noted that he was proud that through a fair and free election, A Connecticut Party has been legitimized in West Hartford.

“I really respect and appreciate everyone’s words, especially with my kids in the audience,” Williams said, noting that he wants to his children, who are 9 and 6, to remember their dad serving.

“But what I really want to emphasize is how much my service on this Town Council has made me love the United States of America,” Williams said. The Town Council makes the decisions that have the most impact on people’s everyday life, he said, and he is proud that despite his father being born into poverty, he was able to be elected to serve in West Hartford.

“I’m pleased that this seat, the people’s seat, will now be occupied by you,” he said to Cortes, the first Latino to serve on the Town Council.

“I want to thank the residents and my fellow councilors for their support, trust, and confidence in all of us. I promise to do my best to honor the privilege and respect I have been given.”

She specifically thanked Sweeney for stepping up to the deputy mayor role, and said she would be relying on him.

She thanked Davidoff for his service in the role over the past term. “You are a statesman,” she said, and said she has been able to do a better job as mayor because of his guidance and advice, and steady presence. “I know you weren’t in the role for the title, but for the work and the contributions. You, my friend, are a class act,” Cantor said.

She congratulated all of the Council members, and their families.

“Each term brings new challenges and opportunities, some larger than others,” Cantor said. This past term was full of extraordinary challenges, but she said is proud of the team and how they met and exceeded the obstacles faced.

“As we come out on the other side of the pandemic we are tasked with moving forward to be better, healthier, more just, stronger, more resilient, more sustainable, more innovative, collaborative and creative and seize upon the new opportunities ahead,” Cantor said.

The following are the committee assignments for the 2021-2023 Council:

The committee shall have cognizance of all matters related to planning and zoning; code enforcement; economic development; and engineering.

The committee shall have cognizance of all matters related to the operational budget and capital improvement program; appropriations to Board of Education, auditing and financial oversight; and general government operations (Assessment, Human resources, information technology, town clerk, registrar of voters, corporation counsel); and approval of the settlement of tax appeals negotiated by legal counsel and staff.

The committee shall have cognizance of all matters related to leisure and social services; community development and federal/state block grant allocation; housing initiatives; library services; public health; and historic preservation.