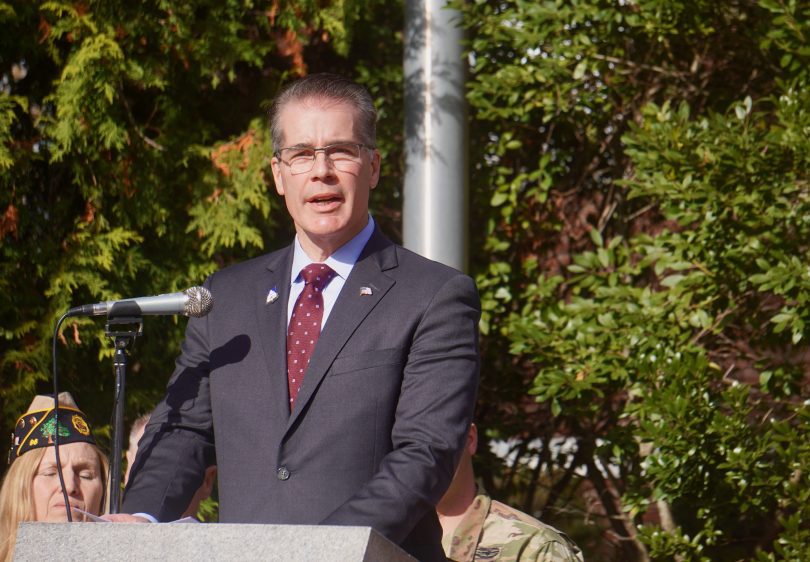 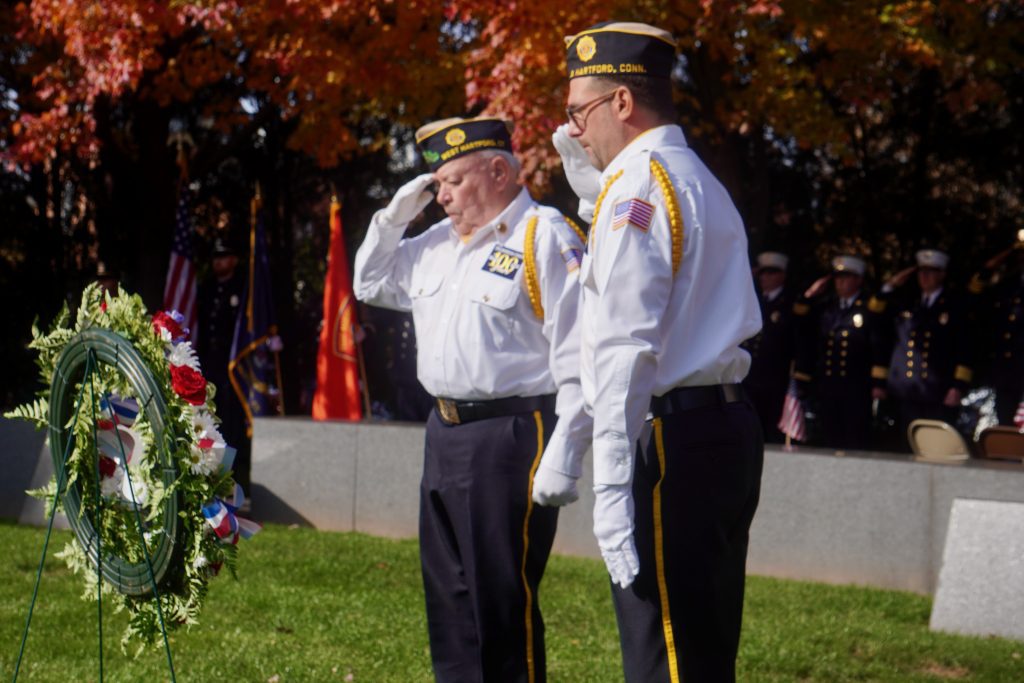 Long before he had finalized his career goals, West Hartford Town Manager Matt Hart enlisted in the Army, out of a sense of duty and adventure, and for the future assistance of the Army College Fund, he said.

Thursday, addressing the community not in his current role as town manager but as the keynote speaker at West Hartford’s annual Veterans Day ceremony, Hart made an emotional plea for services for veterans.

He dedicated his remarks to Army Master Sergeant Marshall Lowery, one of his friends from his time in the Army, a quiet man who was a physically fit former high school athlete, who was found dead just a week ago, just a few days past his 53rd birthday, alone other than with his service dog.

Hart had lost contact with his friend for about 20 years but said thanks to Facebook he recently re-connected with him and many of his other fellow servicemen. While Hart – who also served in the Army National Guard in New York – used that college fund to finish his undergraduate education and earn his master’s and law degrees and never saw combat, Lowery served two tours in Afghanistan.  There he was significantly injured by a roadside bomb. He suffered from PTSD, but continued to be active in the veterans community.

“His friends and the members of his veterans network are shocked, and are grieving his loss, as he played such a significant role in their lives,” Hart said.

“Marshall’s story is not unique,” he said. “Sadly, this scenario, a younger veteran dying before his or her time, has become all too common.”

Suicide, struggles with health issues, with substance abuse, with the ability to hold a job in the civilian workforce, are far too prevalent situations in the veteran community, Hart said. “I think the systemic causes behind the challenges faced by our veterans community are much more complex,” he said. 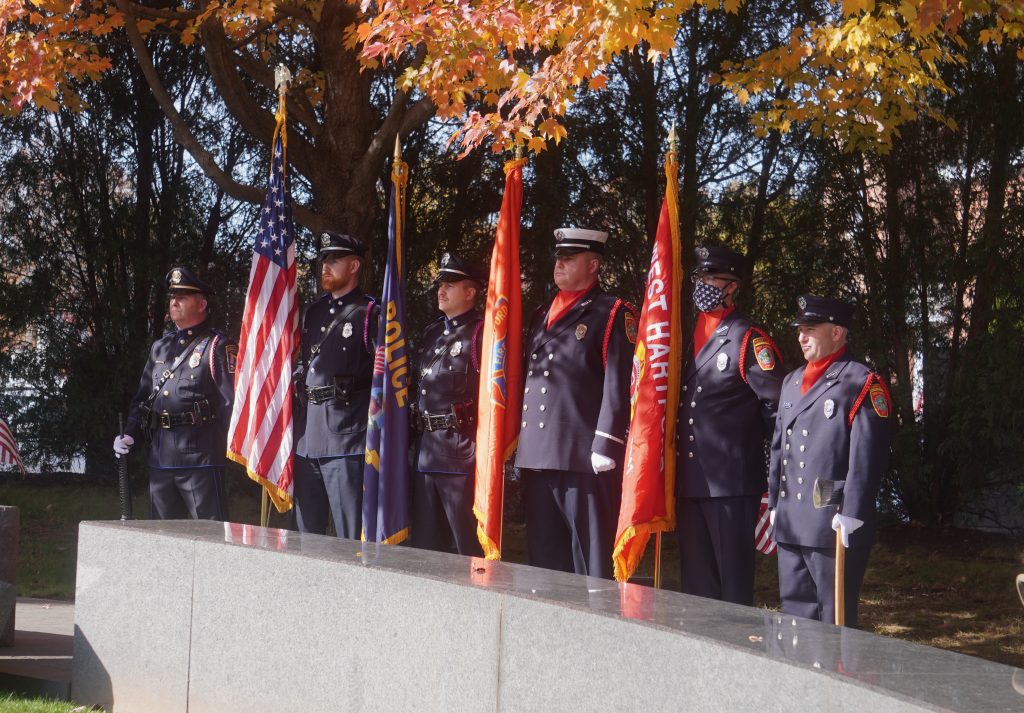 While he doesn’t have all the answers, Hart stressed the importance of encouraging not necessarily more funding, but better allocation of resources, to “continue to support and enhance veterans services for those who need it most.” Critical is expanding VA benefits to the those who may have been exposed to toxic substances – like Blue Water Navy veterans from the Vietnam era and veterans from the wars in Iraq and Afghanistan – and to those who received less than an honorable discharge because of behavior caused by PTSD, to those who were dismissed because of sexual orientation before the Pentagon changed its polity, and to those who serve in the National Guard but may not have served on active duty long enough to qualify.

“It’s important to lend a veteran a helping hand,” Hart said, and to have patience. Quoting Sen. Jon Tester of Montana, Hart said, “We do a great job making civilians into warriors, but we don’t do as good a job making warriors into civilians.”

Hart said he appreciates when he is thanked for his service, and will appreciate help for others in their transition to civilian life. 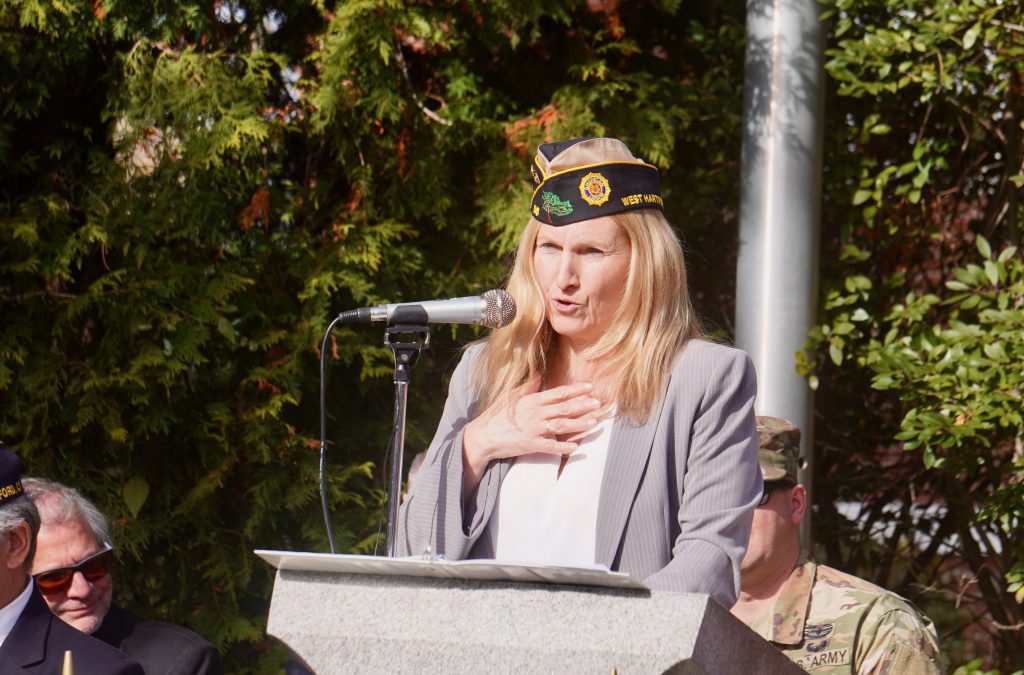 Those lessons include dedication to each other. Service, Slap said, involves a “high level of communal purpose.” 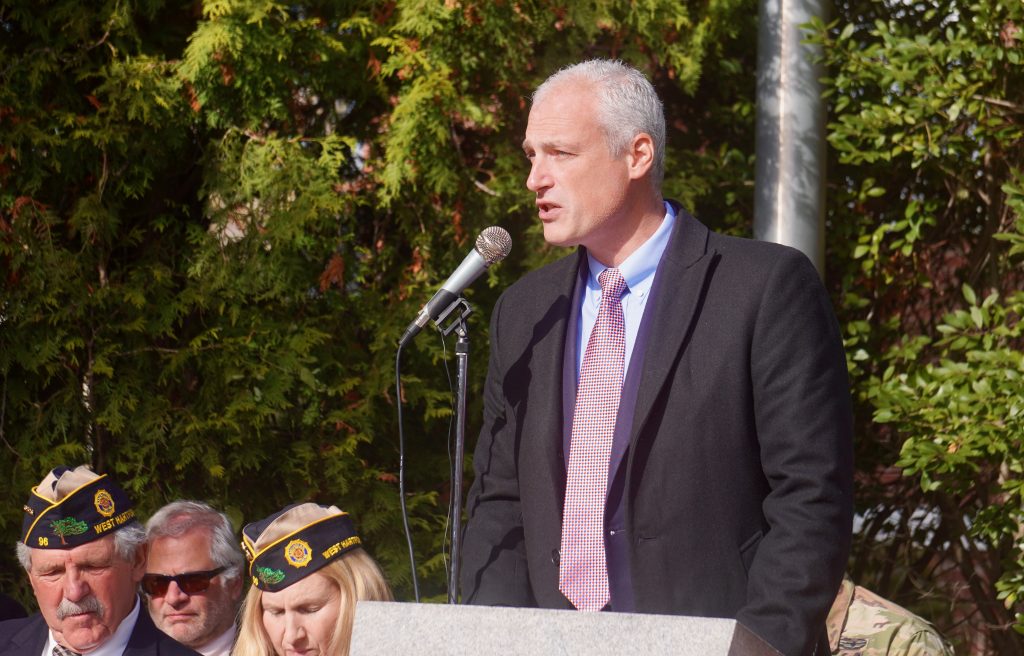 The ability to change is another lesson that can be learned. “Change is different, and we have all been through a lot of change recently,” Slap said. Veterans have learned resilience, and how to build strength through change.

“Oftentimes they have a perspective that can transcend the banality of civilian life,” Slap said. That third lesson is one he personally learned through a neighbor, a veteran who has become one of his best friends.

“We should also ask them, ‘What lessons do you have for me?'” Slap said. “And I think we should be open to learning from our veterans, especially now.” 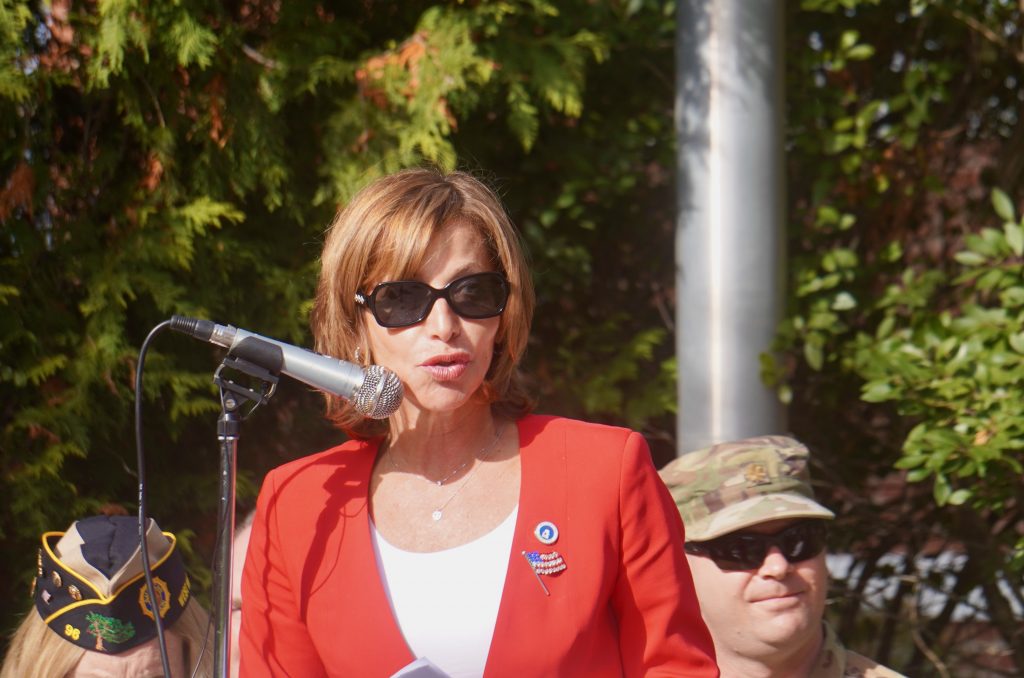 Mayor Shari Cantor shared some thoughts about the significance of the veterans memorial, constructed in 2006, where the annual ceremony is held.

“When I walk into this space … I’m always struck by the symbolism of all its features,” Cantor said. “I immediately feel that we’ve entered a sacred space.”

The memorial incorporates the circular wall of peace, “a timeline that is broken when our armed forces went into conflict, and the names of the West Hartford residents who gave their lives during that conflict are engraved on that section.” 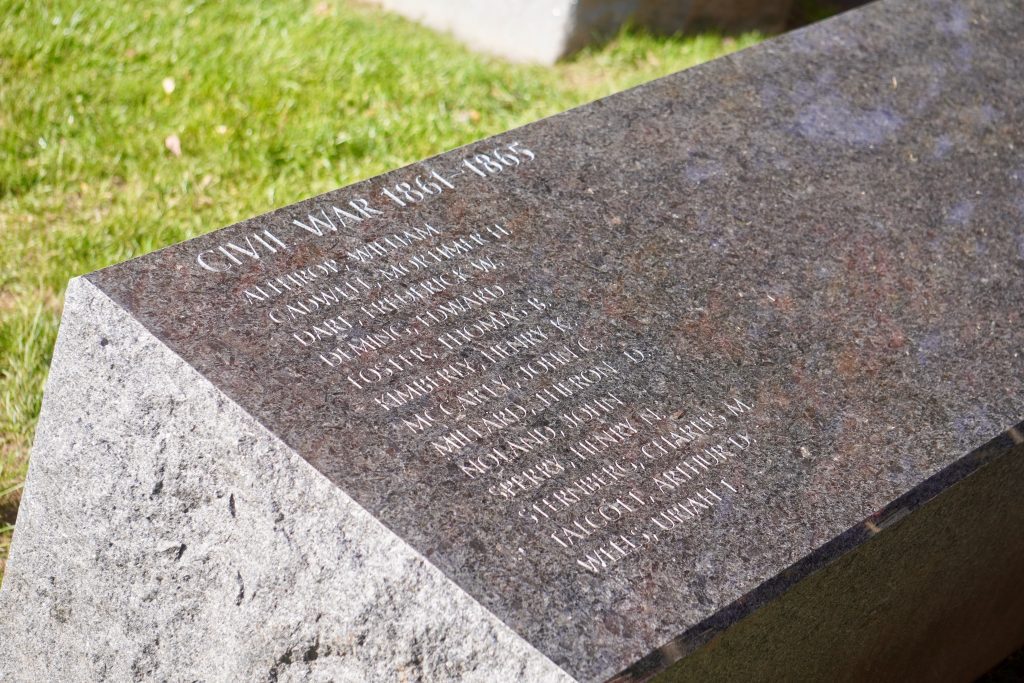 Commemorative bricks line the walkway and include names of those who served in any branch of service, from anywhere in the country. “This memorial is a place that welcomes everyone,” she said.

The open center space, Cantor said, contains “soils from all battlefields, cemeteries, and prisoner of war camps from around the world, and waters from seven oceans were combined with our Connecticut earth to bind the past forever with the present.”

Cantor said the memorial is a special tribute to the “spirit, sacrifice, and commitment of the American people to the common defense of our nation and the greater good of world peace and freedom. We all owe them our gratitude.”

There’s still more to learn, Cantor said, noting that several years ago the name of Prut, a former enslaved man, was added to the Revolutionary War stone following research through the Witness Stones Project.

Cantor also asked the community to take the time to truly listen to veterans’ stories, their stories of struggle as well as service, and to continue to support and appreciate their families. “I hope this happens more than one day or two days per year,” she said. 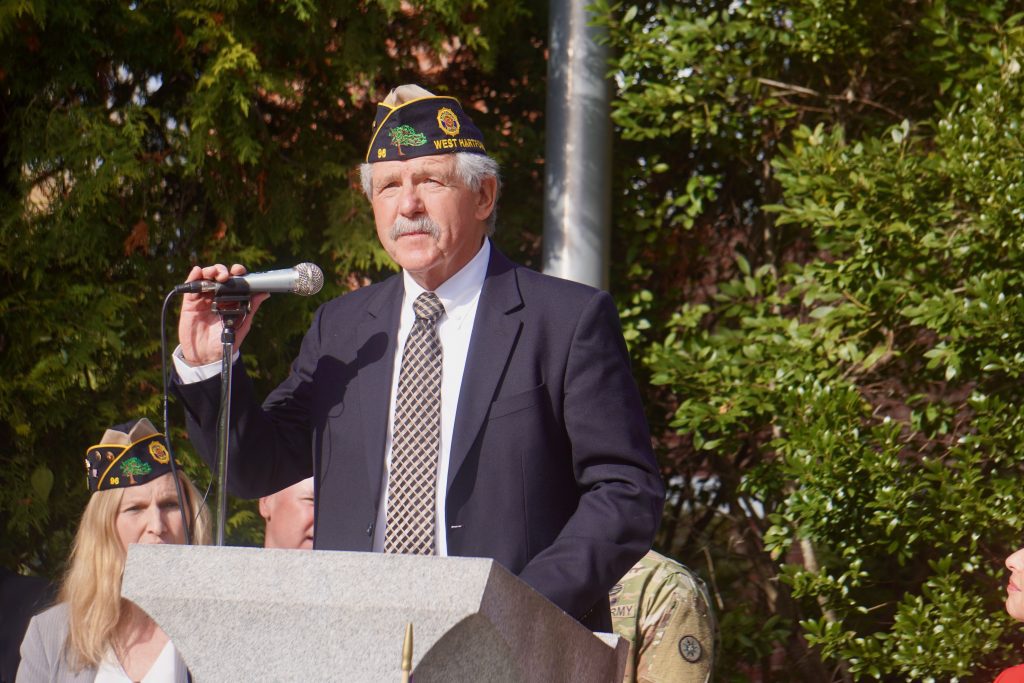 Post 96 Commander Patrick Harrell said that this Veterans Day serves as the official launch of the post’s “march to 100,” commemorating the 100th anniversary in 2022. He noted the namesakes of Hayes-Velhage Post 96 – Waldo Hayes and Frank Velhage – both gave their lives while serving during World War II, but in very different ways. Hayes died as a result of enemy action, while Velhage – the first World War II fatality from West Hartford – died in a shipboard accident in Philadelphia. 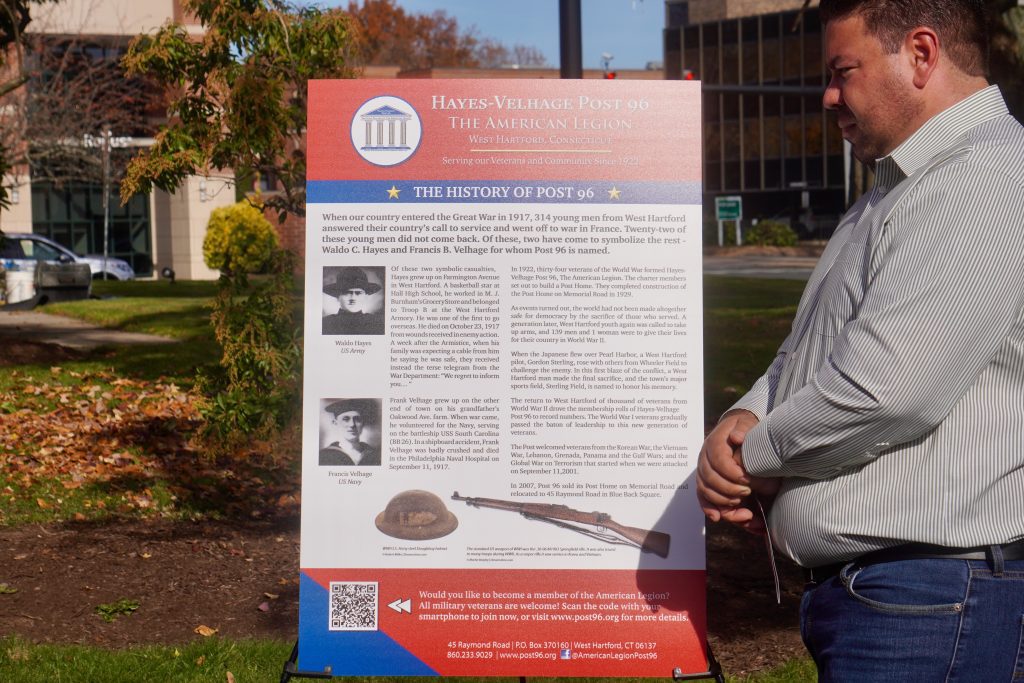 “While Waldo lost his life on the battlefield, the life that was given by Francis was no less significant,” Harrell said.

The ceremony included the placement of a memorial wreath.

Sean Nolan, a U.S. Army veteran and member of Calvary Fellowship gave the invocation and benediction. 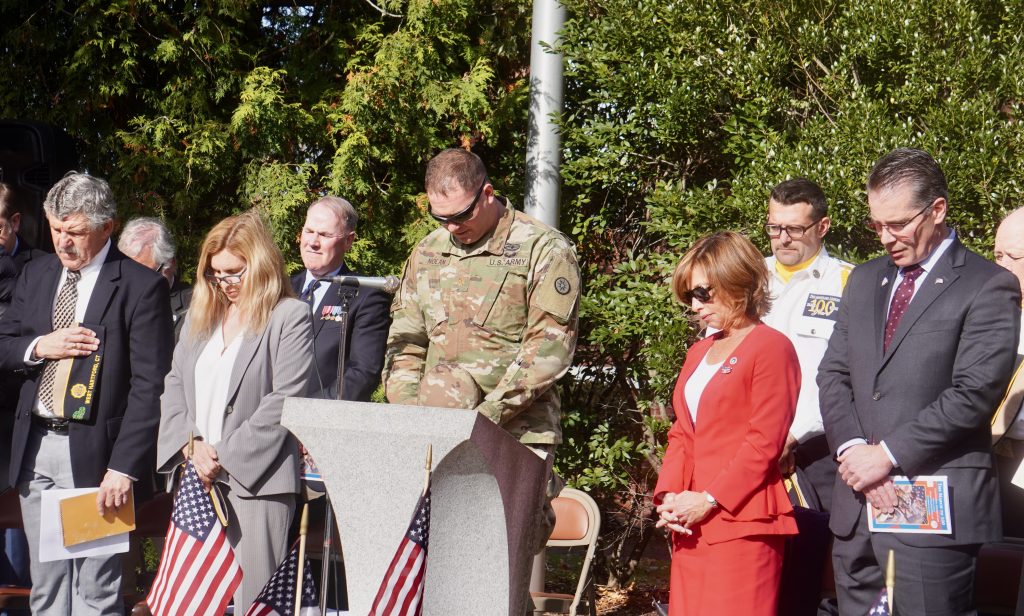 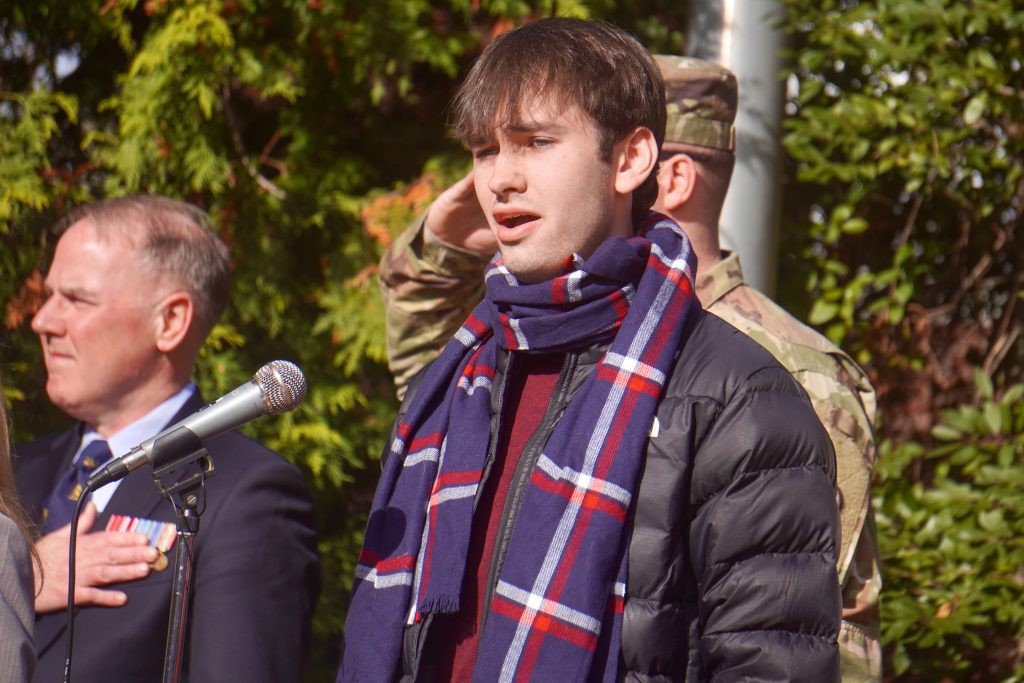 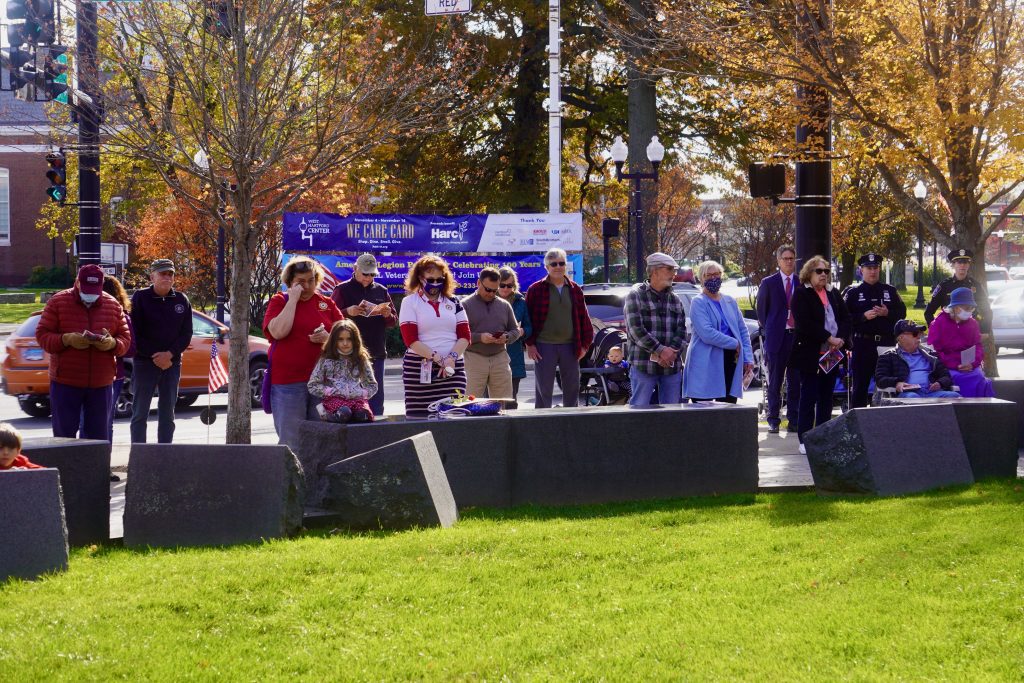 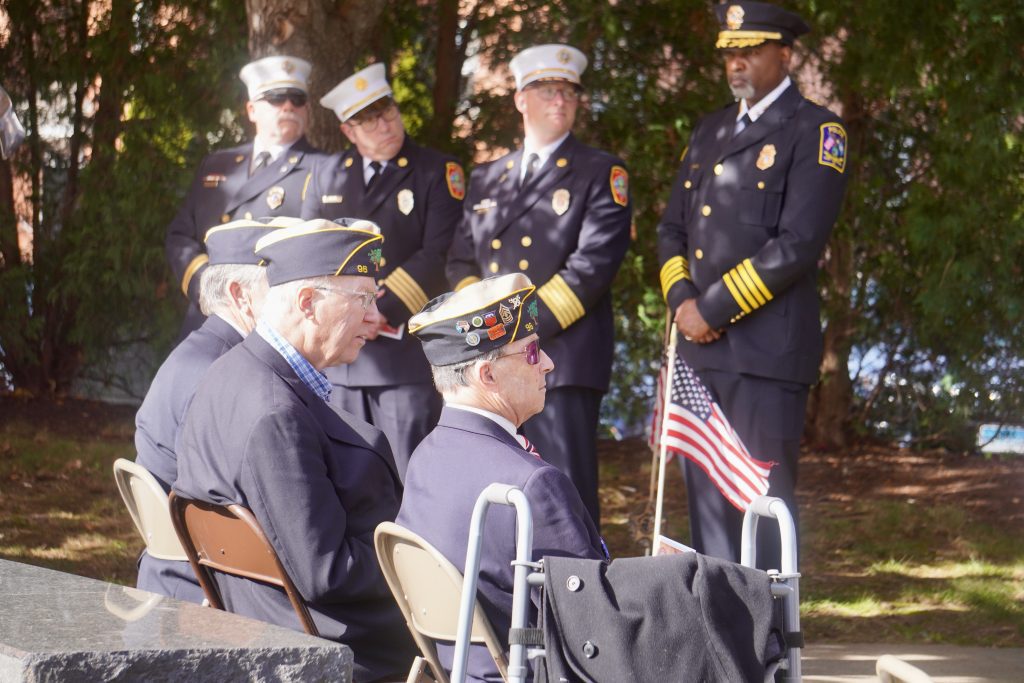 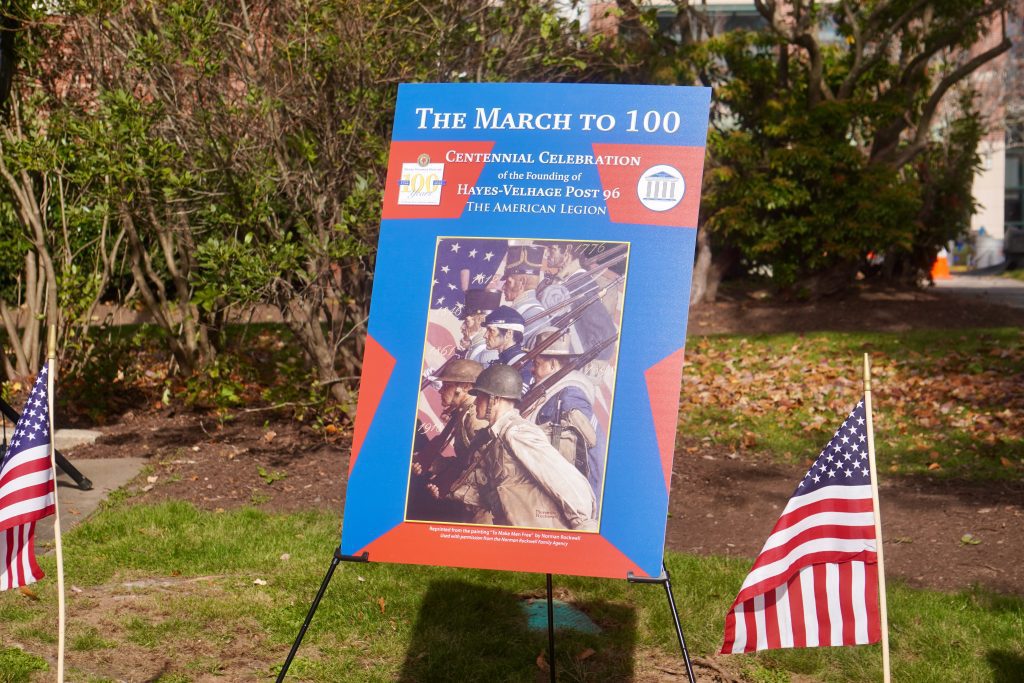 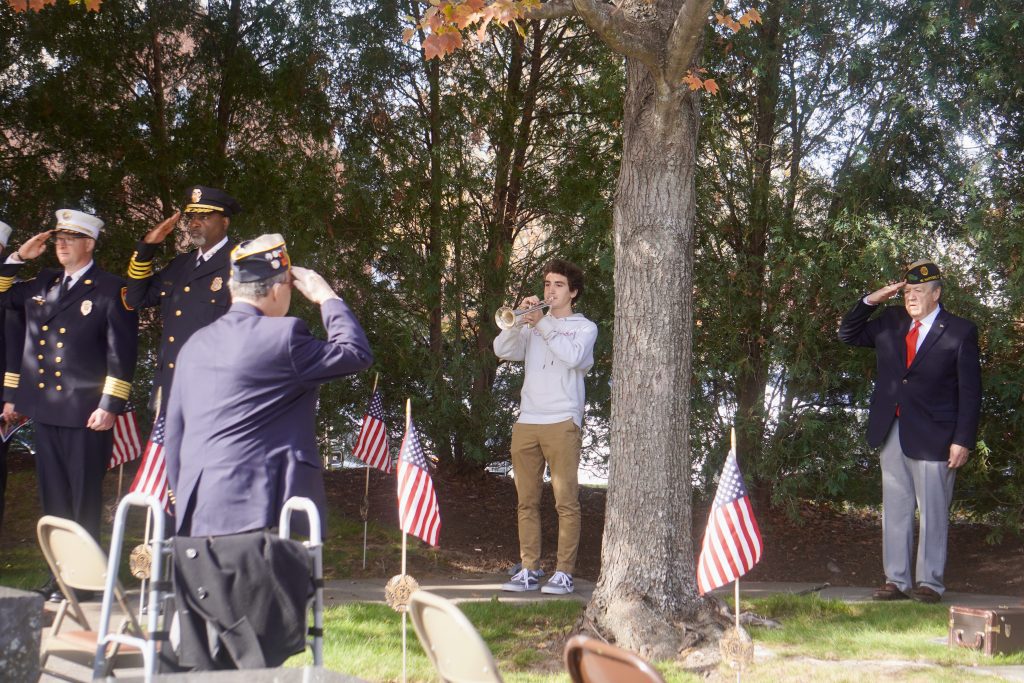 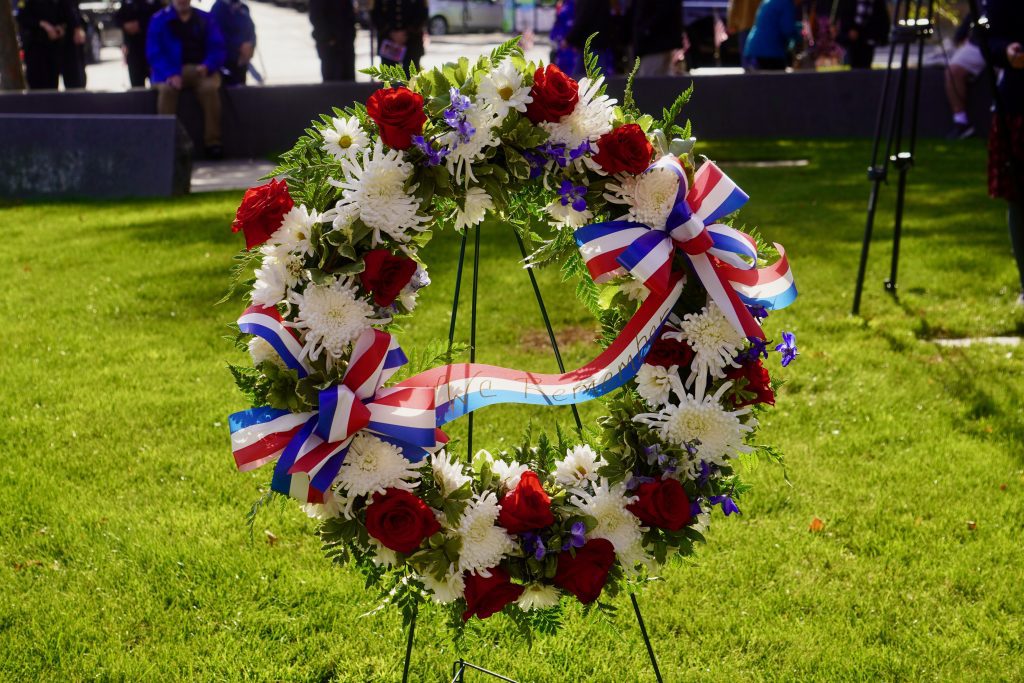