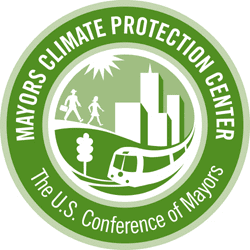 West Hartford Mayor Shari has been invited to speak at the U.S. Conference of Mayors 88th Annual Meeting, held virtually on Dec. 18 – and it was officially announced Friday morning that the town has won top honors in the 14th Annual Climate Protection Award competition in the category of small cities (population under 100,000).

Hartford Mayor Luke Bronin will be recognized for the City of Hartford winning honorable mention in the large cities category.

Now in its 14th year, the mayors’ award program, an initiative sponsored by The U.S. Conference of Mayors and Walmart, recognizes the nation’s mayors for their successful and innovative energy and climate protection efforts.

West Hartford is being recognized for its Solar Virtual Net Metering program, while Hartford’s honorable mention recognizes its efforts in promoting energy justice.

The first place award comes with a $15,000 donation from Walmart to a local sustainability nonprofit organization, and that will be presented in January.

West Hartford’s Virtual Net Metering program harnesses renewable, solar energy produced off-site (50 miles away in Thompson, CT) and “virtually” net meters against eight of the town’s buildings or schools, which serve as “beneficial accounts” for the credits associated with the solar generation.

In FY2020, the 2.4 MW project produced 2.8 Million kWh of solar electricity, reducing greenhouse gas emissions by the equivalent of nearly 2,000 metric tons of CO2. The development of this project supports local renewable generation, jobs, and economic benefits in the region. In addition, the financial savings that accrue to the town allow the town to make a separate Renewable Energy Credit (REC) purchase based on the town’s total municipal electricity use.

“In West Hartford, we strive to employ forward thinking and best practices to improve the quality of life for our residents; this includes accelerating the development of locally-based renewable energy,” Cantor said. “When we started, ‘Virtual Net Metering’ was a new concept to us, but we learned quickly about its many benefits and we embraced it. We are saving money, cutting carbon emissions, and hopefully providing a ‘best practice’ for others in supporting their local climate action.”

The City of Hartford won Honorable Mention in the Large City category for its efforts to promote energy justice. Harford created an Office of Sustainability in 2017, and it has led a number of initiatives to make the city greener and more equitable. For example, Hartford replaced more than 90% of its streetlights with high-efficiency bulbs, designed an Energy Equity Challenge to reduce energy costs for residents, participated in the Solar for All campaign to increase access to solar energy in Hartford, and distributed nearly 1,000 rain barrels to improve stormwater management for residents.

“We’re proud of our work to make Hartford a cleaner, greener, more equitable community, and we know there’s a lot more work to do,” said Mayor Luke Bronin. “This recognition is a tribute to our Office of Sustainability and the work they’ve done to directly involve residents in our climate stewardship work, and to make city government more energy efficient. I also want to congratulate West Hartford for winning the first-place prize nationally in their category. Our joint commitment sends a strong message about how seriously our region takes our responsibility to build healthier communities.”

“Connecticut won two of 12 awards among all the applicants nationwide, and, together with the recent appointment of Rep. DeLauro to chair House Appropriations Committee, demonstrates strong leadership and support for locally-based climate solutions our small state,” the Town of West Hartford and City of Hartford said in a joint news release.

Pittsburgh is the winner of the large city category.

Cantor will address the small cities portion of the conference at 2 p.m. on Dec. 18 via Zoom (register here), and Pittsburgh Mayor William Peduto will address the larger city portion at noon to speak about their award-winning initiatives.

“Mayors Peduto and Cantor show us how local leadership is delivering cost-effective solutions to the growing climate challenges before our cities, our nation and the world,” said USCM President Louisville Mayor Greg Fischer in a statement. “The innovation and creativity of these mayors and the other award winners will hopefully inspire other mayors, as well as all our federal partners, to join us in taking climate action.”

Full descriptions of the 2020 Mayors’ Climate Protection Award winning programs can be found here, as well as in the PDF below.

“President-elect Biden has rightly pledged to make climate protection a top priority of his new administration, and mayors stand ready to join with him to meet the climate challenges before all of us,” Tom Cochran, USCM CEO and executive director, said in a statement. “Mayors have a record of success in taking climate action at the local level and have urged greater federal engagement and commitments on climate protection to bolster and expand upon what mayors are already doing.

“The really exciting part of the Western Pennsylvania Energy Consortium is that it has brought together a critical mass of energy users to reshape our region’s energy future,” Pittsburgh Mayor William Peduto said in a statement. “This broad partnership saves money for our taxpayers, creates local clean energy jobs and reduces our carbon use, today and into the future.”

The Protection Awards Initiative is sponsored by The U.S. Conference of Mayors as well as Walmart.

“We commend these mayors and all of the awardees for sustaining their climate efforts and commitments during this most challenging year,” Amy Hill, Senior Director for Walmart, said in the announcement. “Amidst this pandemic and all of its disruption and varied impacts, the successful efforts of these mayors are even more impressive given the many challenges before their cities, including climate protection.”