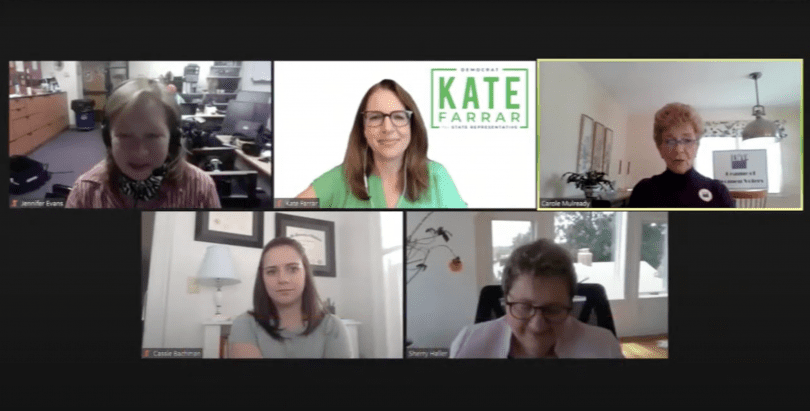 A debate between Democrats running in the 20th District State Representative primary on Aug. 11 was held on July 16.

The League of Women Voters of Greater Hartford and West Hartford Community Interactive held an online debate Thursday for prospective candidates Sherry Haller and Kate Farrar in advance of the Aug. 11 primary for the State Representative seat in the 20th District of Connecticut.

Both candidates were given time to share their stances on issues facing the West Hartford community such as police accountability, absentee ballots and voting in November, money, and taxes for the state and town.

In addition, community participation was also highly encouraged by the online audience. The candidates were faced with a variety of question topics such as health disparities, health care, zoning regulations and restrictions, schools, environmental concerns, gun control, and second amendment rights.

The first debate topic was police accountability, specifically centering in on the proposal coming before the legislature in the upcoming weeks.

“It is long past due that we address systemic racism, not just in policing but in health care and education and our housing,” said Farrar.

“We have to focus on African American communities where in fact fundamental change around police behavior and training has to take place and that includes re-shifting or shifting the money that police get for the services that communities need,” said Haller.

Moving forward, both candidates showed support for an expansion of the ability to vote by absentee ballot in the upcoming November election.

Community members asked how the prospective candidates would work to create access to high-quality, affordable health care to address the longstanding inequalities in our health care system.

Farrar said that she hopes to expand insurance coverage to residents of all income levels as well as undocumented residents. In addition to this, Farrar said she believes creating access to affordable healthcare by investing in community health workers is one way to address disparities in healthcare.

Haller agreed with Farrar and emphasized the importance of investing in community health centers that will provide communities with ample support.

Another audience question touched upon calling for a change of zoning regulations and restrictions within the town – an issue widely cited in recent reports as a barrier to equity.

Haller believes it is important to communicate with colleagues and figure out the most important aspect of zoning reform that will benefit people who want to move into the West Hartford community but also benefit communities throughout the state.

Farrar touched upon the importance of having affordable housing for families and seniors to live and thrive. She said she aims to create diverse housing and business opportunity by working together with the community.

Furthering the debate, the topic moved toward money, budget, and taxes with respect to COVID-19 and taxes at the state level to help municipalities.

“Creating a fairer tax system in the state, that means making sure that middle-income families are not bearing the burden and wealthier families are paying a fairer share because we need to build our budget and close the inequality gap in our state,” said Farrar.

Haller said she is in support of a progressive state income tax and believes we must focus on small businesses and working families in this time of uncertainty.

One major topic asked from the community audience was regarding strengthening schools and how to create a safe reopening plan.

Haller spoke first on this topic. She applauded the state Department of Education for their approach, asking boards of education to create three plans as options: reopening, hybrid, and virtual as a way to prepare for the uncertain future.

Additionally, Haller focused on the support children are receiving across the state. She noted how in the midst of these difficult times we are facing the state Department of Education has been feeding students multiple meals a day and this type of support should and will be continued, including a new initiative to provide dinner as well.

Finally, Haller wants to include teacher participation in the conversation of creating a safe reopening plan as a way to understand what is realistic and safe for the upcoming academic year.

Farrar said this issue is “front and center.”  A core part of the reopening strategy would be to create equitable learning from home for all students.

She said it is important to “address disparities moving forward” and critical to focus on the needs of students with intellectual and developmental disabilities as well, to pay attention to the needs of all students.

Haller added that she thinks the ECS formula needs to change to reflect West Hartford’s diversity and Farrar said the early childhood education is also critically important in considering “all of working families’ needs.”

Another audience question asked the prospective candidates how they would plan to balance gun control with second amendment rights.

Both Farrar and Haller believed that we must promote gun safety as a way to reduce violence within the communities.

Another community audience member asked the candidates to respond to climate change and investment in a green economy.

Haller believes that addressing the environmental crisis goes hand in hand with job development. She believes that creating a green plan will bring more young people into the workforce with proper training in place.

Moving forward, the candidates were asked to share what their first priority would be if elected.

Farrar spoke first, sharing that in the age of COVID-19, “expanding affordable health care, controlling prescription drug costs, and addressing healthcare disparities during this crisis” would be her first priority. She aims to pass proper legislation and listen to constituents and the community on these issues.

Haller shares that her first priority would be “the opportunity for our educational system to be one that strengthens and supports even further those students who are not college-bound.” She hopes to work and provide students with the proper opportunities to not only pursue a job after high school but find a career path.

The final question of the debate brought smiles to both candidates as they were asked to recall an event during the last year where they learned something new about West Hartford.

Haller spoke first and shared her love for local restaurants and eateries. She continued by sharing how it is important to make sure the district residents are involved in town discussions.

Farrar followed by sharing how in light of social distancing regulations and COVID-19, how the West Hartford community has been able to come together and show solidarity.

The debate can be viewed in its entirely on WHCI’s YouTube channel below.