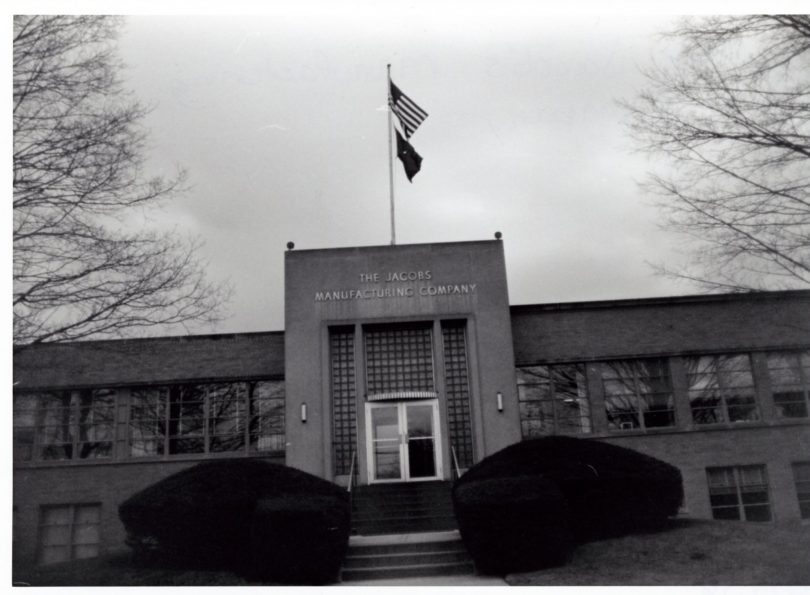 This Monday Memory plan seems to be working out better for me than Throwback Thursday, so we will continue on this course – at least for now! 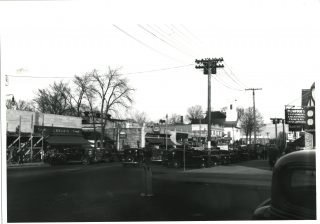 Last week’s image (at right and in larger size below) was of a pretty obvious location, but it was fun to see how many of the businesses in the photo people could identify, as well as how many people noted had been in those locations over the years.

“That’s an easy one. I think the giveaway is Plimpton’s on the corner of LaSalle and Farmington Ave.,” was the first comment, courtesy of Lucien Grillo.

A long list of details came from Derek Pariseault: “Good one this week: intersection of LaSalle Road and Farmington Ave. The West Hartford Diner, the First National Market on the right ( which became Hammarlunds 5&10, then CVS ) Kresge’s on the left which became Pfau’s and now Larsen’s Hardware. East on Farmington Ave there was Powers Clothing, an alley, then Dougherty’s Drug store ( can you imagine that today a drug store), the Central Theater, the Clark Building and the Baptist Church ( that may be where Maxwell Drugs was). On the corner where Plimpton’s is Bennett’s card store moved in after Plimpton’s moved further west. Who can forget Krohner’s Bakery and Hilliard’s Candy stores. That photo brings back a lot of good memories. Saturday mornings at the Central: cartoons, westerns, Duncan yoyo contests, the center has changed.”

Derek also added a second comment, with the following: “A) picture is from early 30’s B) I believe Cosi’s is in the old Dougherty Drug Store because it’s on the east corner of the alley and Powers was on the west corner C) where I figured Maxwell Drug Store was is now a bank.”

“That is Farmington Ave in West Hartford Center. The picture was taken from the south side facing northeast. You can see part of the Central Theater sign, and the First National is where Cosi is currently. The cars look to be from the 20’s, so I’d guess this picture was taken sometime in the late 20’s to early 30’s,” added Pat McCarthy.

Kris Hanko provided some detail about the church: “The church in the photo is First Baptist Church, which is now at 90 No. Main Street. FBC moved to its current location in 1937. Early in 1937 an offer of $70,000 was made for the church’s property on Farmington Avenue. Our current church site was purchased from Charles A. Griswold, a senior member of our church at that time.”

Liz Gillette added some more interesting details: “Just a tid-bit. The restaurant that became the Edelwiess, then Puerto Vallarta, then Treva, was indeed the West Hartford Diner, and it WAS a diner. The restaurants were built, expanded and updated around the diner itself – kind of like ‘Mike Mulligan’s Steamshovel.’ Though most of the remnants are gone now, the bowed ceiling comes from that same diner.”

“It looks like Plimptons is where Bennett’s used to be. I think this was taken looking east on Farmington Ave from the corner of LaSalle Rd. I love the neon signs which are no longer allowed. The church is still on the left side of Farmington so I’m guessing this is the 1940s,” wrote Lisa Petersen.

John Maloney wondered what had happened to the church that’s visible in the photo. He said that while working on the Veteran’s Memorial, remnants from what had stood there were found in the ground.

Olden Pedals provided a link to this story from 2011 in the West Hartford News, which provided details of the fire that claimed the Greystone Church in January 1942, but that’s not the church in this photo. The church in the photo is the First Baptist Church, which stood at the northwest corner of the intersection of Farmington Avenue and South Main Street until 1936, when (according to the “Celebrate! West Hartford Illustrated History, by Miriam Butterworth, Ellsworth Grant, and Richard Woodworth) due to its “wobbly spire” and other repair needs, was rebuilt in the same exact style on North Main Street, where it stands today.

“William F. Powers clothing…my mom’s employer!. on south side of Farmington Avenue next to what I think was the 5 & 10!” recalled Joanne Smith.

Debbie Grinold said that her first job, when she was 16, was at Hammerlund’s 5 & 10. She also added that the “West Hartford diner which later became Edelweiss is there behind the first tree on the north side of Farmington Ave.”

Anna Smith Shostak commented, “This is the corner of LaSalle and Farmington, looking east. 1930s or 40s. My memories of the corner on the right are Bennett’s, Hilliard’s and Record Express – miss them all! You can see the CBT building off in the distance, now Bank of America.” To which Kara Sheehan added, “I seriously miss Hilliard’s butter crunch.”

There’s no exact date provided for this image, but it was labeled as the 1930s, and because the First Baptist Church was taken down in 1936, it was sometime before then. 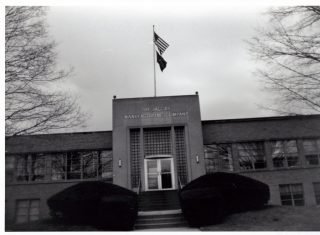 The location for this week’s Monday Memory image (at right and in larger size below as well as at the top of this column) is not quite as obvious, but some of our West Hartford history buffs will likely figure it out.

Where was this building located?

Is it still there today?

If not, what’s in its place? 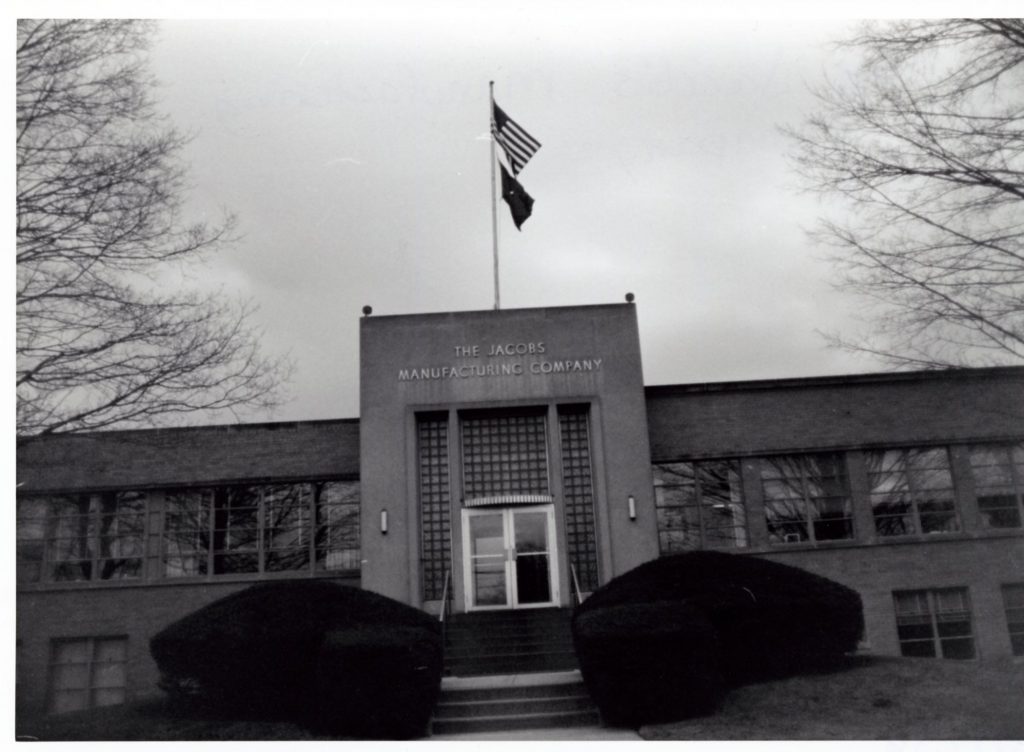 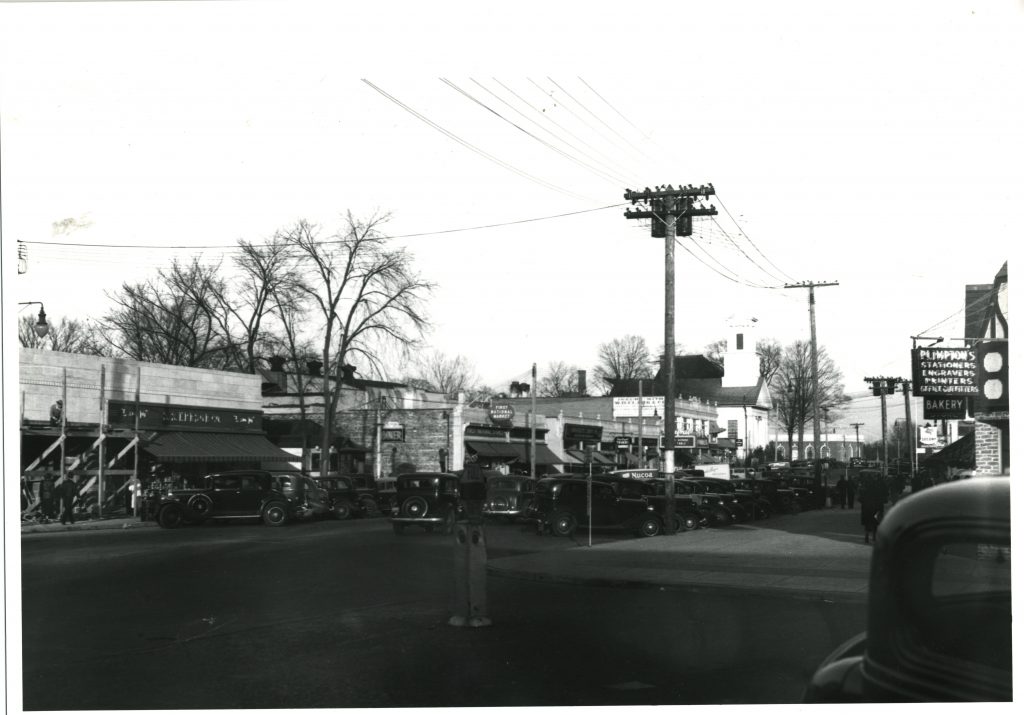