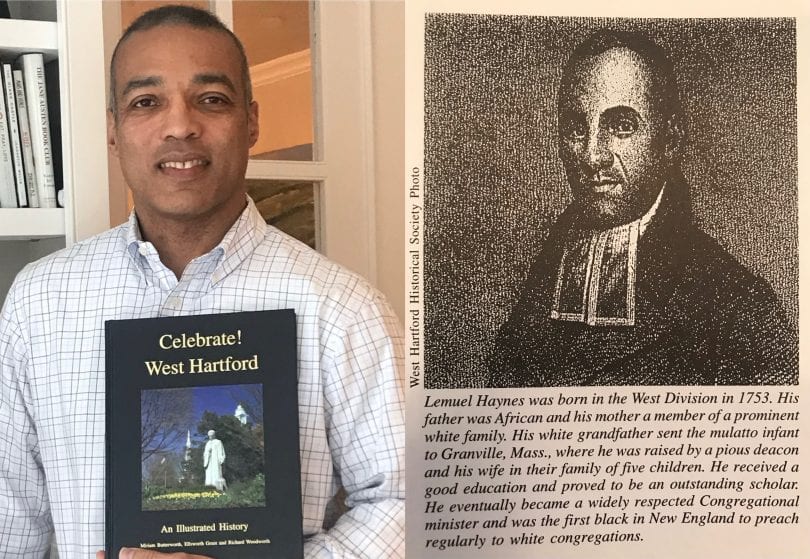 Earl Exum (left), president of WHAASCO, holds the Celebrate! West Hartford history book. On the right is the picture of Lemuel Haynes from page 4 of the book. Courtesy image

Lemuel Haynes was born in what was then called the West District – now West Hartford – in 1753, and went on to become the first African American ordained as a minister to lead predominantly white congregations as part of the mainstream Congregational church in New England in the late 1700s and early 1800s.

“We think it is important that West Hartford residents learn more about many great African American historical figures from Connecticut – especially Haynes, who was born in our town,” said WHAASCO President Earl Exum. “We hope a physical memorial will be part of the Unity Green space in West Hartford Center. It would have particular significance since the green is owned by a Congregational Church.”

The book “Celebrate! West Hartford, an illustrated history of the town published in 2001 and written as a collaboration between Miriam “Mims” Butterworth, Ellsworth Grant, and Richard Woodworth, notes that Haynes’ father was Black and his mother was white. He was sent by his white grandfather to be raised by a deacon and his family in Granville, MA.

Haynes served as a member of the militia during the Revolutionary War.

PBS.org notes that Haynes had the opportunity to attend Dartmouth College after the war, but instead studied Greek and Latin with clergy in Connecticut and was ordained as a Congregational minister in 1785, becoming pastor of an all white congregation in Torrington, CT.

Haynes became the first African American to receive a degree from an American college, receiving an honorary Masters of Arts from Middlebury College in 1804.

According to Exum, throughout his life Haynes led predominantly white congregations in New England while slavery and racism were prolific in the United States. Haynes became internationally known for his writing about freedom and Republicanism.

For more information about plans for the memorial, email [email protected].

WHAASCO is a community membership organization that holds as its mission the facilitation of fair and equitable participation in the civic, political, economic, and cultural activities within the West Hartford community.

The Beta Iota Boulé Foundation is a West Hartford, CT based 501(c)(3) non-profit organization that focuses on supporting the African American community and initiatives in the areas of education, youth development, arts and culture, health and human services, recreation, and civics.