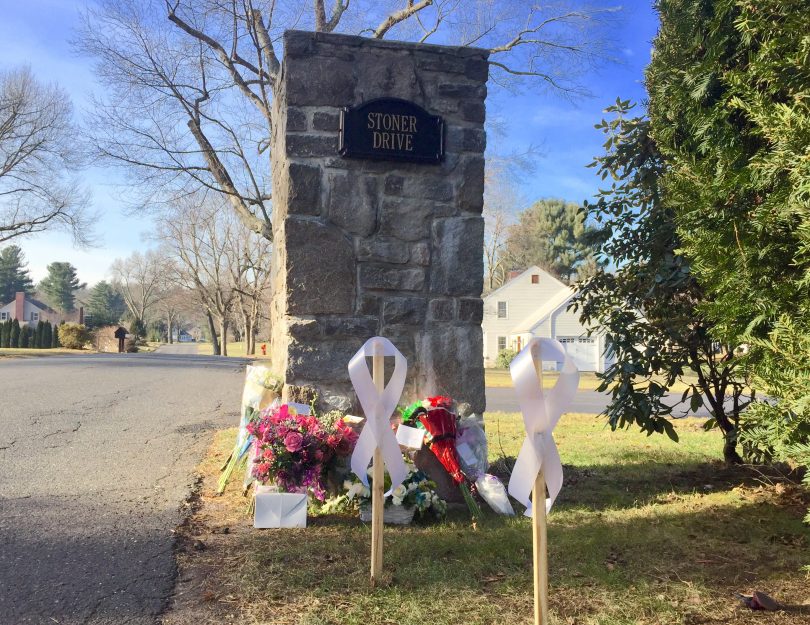 White ribbons are posted at the entrance to Stoner Drive in West Hartford, where people have also left bouquets of flowers as a memorial to a 12-year-old resident who was killed Monday. Photo credit: Ronni Newton (we-ha.com file photo)

A prayer service was held at St. Patrick-St. Anthony Church in Hartford on Thursday for the West Hartford family at the center of a tragic stabbing earlier in the week, as counseling continues in the schools and the community posts white ribbons to show support.

A feeling of heavy sadness hangs over the West Hartford community, as adults and children continue to grieve and try to make sense of Monday’s tragic incident in which a 12-year old boy fatally stabbed his twin sister and seriously injured their mother.

Many have turned to prayer, and are wearing white ribbons and placing large white bows in front of their homes as a show of support for the family at the center of this tragedy. Counseling continues to be offered for children and adults.

“We need to keep holding each other up and support each other. That’s what a true community does,” Mayor Shari Cantor said Thursday evening, as she returned from a prayer service at St. Patrick-St. Anthony Church in Hartford – the parish that the impacted family has attended for years and the place where the twins were baptized.

“Tragedy can happen in every community, but what defines us is how we react, how we help each other, how we show strength, and love,” said Cantor.

Hundreds attended the prayer service, which was not open to members of the media. Cantor said that the large church was packed, and the service included prayer, blessings, singing of “The First Noel,” and a candlelight procession. A meal was offered next door following the emotional and peaceful service.

“It definitely gave people comfort to be together,” Cantor said.

Father Thomas Gallagher read a statement on behalf of the father of the children, who did not attend Thursday’s service:

“Words cannot express the sorry our family is feeling. We are comforted and so deeply touched by the overwhelming support we have received from the St. Patrick-St. Anthony parish community, our friends, neighbors, and community, and for that we will be forever grateful. Please continue to keep my family in your prayers and thank you for your compassion and support.”

At the entrance to Stoner Drive, where the family’s home is located and where the tragedy took place Monday afternoon, white ribbons have been posted and bouquets of flowers have been left in memoriam for the 12-year-old girl who did not survive her injuries. The large white ribbons, fastened to posts, stand in front of nearly every home from one end of the road to the other.

Jennifer Bugai, the floral manager at Stop & Shop at 1235 Farmington Ave., heard about the white ribbons on Stoner Drive and thought it would be nice to offer ribbons to anyone who wanted to wear them or place them outside their homes. On Thursday morning she began handing them out, and early Thursday evening she said she had given away more than 100 of the large bows and at least 50 ribbons.

“Everyone wants to know what they can do,” said Bugai, who grew up in West Hartford. The white ribbons are a simple gesture, but a visible way to honor the family.

She ran out of ribbon late Thursday, but posted on Facebook that she would have more ready by Friday morning at 8 a.m.

Bugai said she also spoke with Barbara Roberts in West Hartford’s Department of Social Services, and has offered to donate food or other items that might be needed.

Extra counselors have been deployed to West Hartford schools throughout the week, particularly at Sedgwick Middle School where the twins were in seventh grade, as well as at Duffy, their former elementary school. Superintendent Tom Moore said that staff has been reaching out to students and families to ensure that resources are available, and will continue to be available in the new year.

Sedgwick Principal Andrew Clapsaddle sent a letter home to families on Thursday, making sure they know how to find support at any time during school break next week. The 211 support line is available at any time, and The Bridge Family Center (860-521-8035) will have counselors available from Dec. 26-28.

“I want to take a moment and thank our school community for the positive comments, messages, and support that we have received over the last two days,” Clapsaddle wrote in his message. “As everyone navigates through this difficult time, those acts of kindness just reinforce what I already know … we are a generous and supportive family.”

Clapsaddle said he was impressed by the students having the courage to seek help, and thanked the dedicated clinicians from West Hartford Public Schools as well as from The Bridge who have come to the aid of those who have needed them this week.

Sedgwick and Duffy staff have been particularly impacted, and Cantor wanted to personally acknowledge them, and the town’s first responders, for what they have done this week.

She ordered pizza to be delivered to the police and firefighters on Thursday, and when she arrived to pick up the pizzas and pay for them, the owner of Harry’s Pizza on South Main Street said it was on him, and there was no way he would let her pay. On Friday, pizza will be delivered to the staff at Duffy and Sedgwick.

West Hartford’s first responders have had a very challenging week, including a fatal pedestrian crash on Sunday night, a house fire on Monday morning, and Monday afternoon’s tragic double stabbing.

“It’s so important to have a dedicated, professional group of first responders,” said Cantor. “I’m so grateful for their supreme empathy and their kindness and understanding.”

Cantor said she remains in regular touch with spokespeople for the father of the children, who has been spending much of his time at St. Francis Hospital where his wife remains in stable condition.

“There’s tremendous support at the hospital by family and friends, and they’re surrounded by a lot of love,” said Cantor.

The son has been charged with one count of murder with special circumstances due to the victim being under age 16, and one count of first-degree assault. He was arraigned Tuesday and is now in the custody of judicial marshals.

There’s no roadmap for how to deal with a situation like this, and Cantor said she is so impressed with the way the community, the schools, and first responders have reacted with strength, and with love.

There are no plans for a town-sponsored service at this time, said Cantor, but she said that smaller, private gatherings are very strongly encouraged.

“I wish everybody peace,” said Cantor.

[Editor’s note: We-Ha.com is not publishing the names of the any of the family members involved in this incident.]