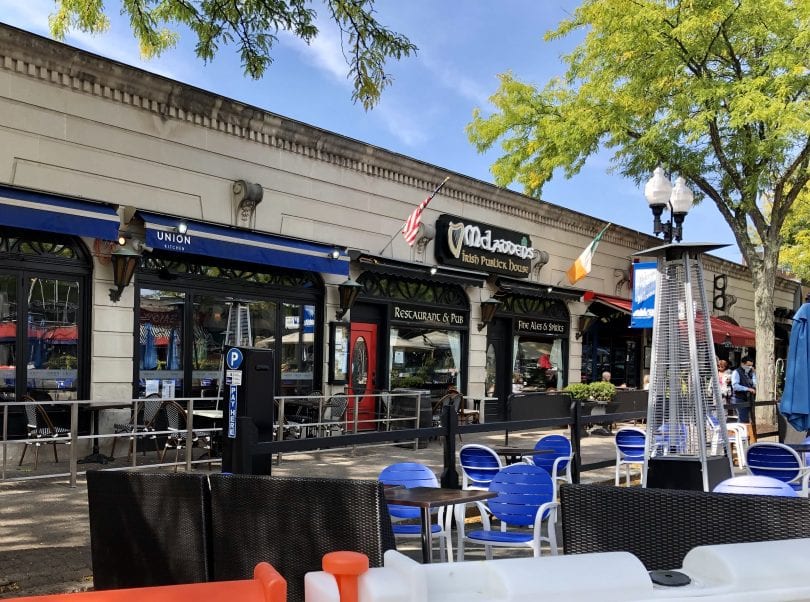 Bean Restaurant Group is planning to transform the McLadden’s space into Wurst Haus, a concept that is already very popular in Massachusetts.

West Hartford has a diversity of restaurants, but missing from the mix has been German food.

That will change as soon as the end of October, when the former Irish pub, McLadden’s, is transformed by Bean Restaurant Group into Wurst Haus, with Chef/Partner Zachary Shuman at the helm.

The Yee family’s Massachusetts-based Bean Restaurant Group, in partnership with Peter Picknelly, CEO of Peter Pan Bus Lines, made its first foray into Connecticut when it purchased the former Noble & Co. at 43 Lasalle Rd. – now Union Kitchen – and the McLadden’s locations from Mike Ladden in 2018.

Shuman, a West Hartford native who was already with Bean Restaurant Group, returned to his hometown as executive chef and partner at Union Kitchen.

Like all restaurants and bars, McLadden’s was shuttered when one of Gov. Ned Lamont’s earliest COVID-19 executive orders prohibited on-premises dining in bars and restaurants as of March 16.

Unlike Union Kitchen and most other establishments in West Hartford, McLadden’s never reopened. Early this week, a dusty shamrock still hung over the bar, a sad memento of the St. Patrick’s Day celebration that never quite happened. 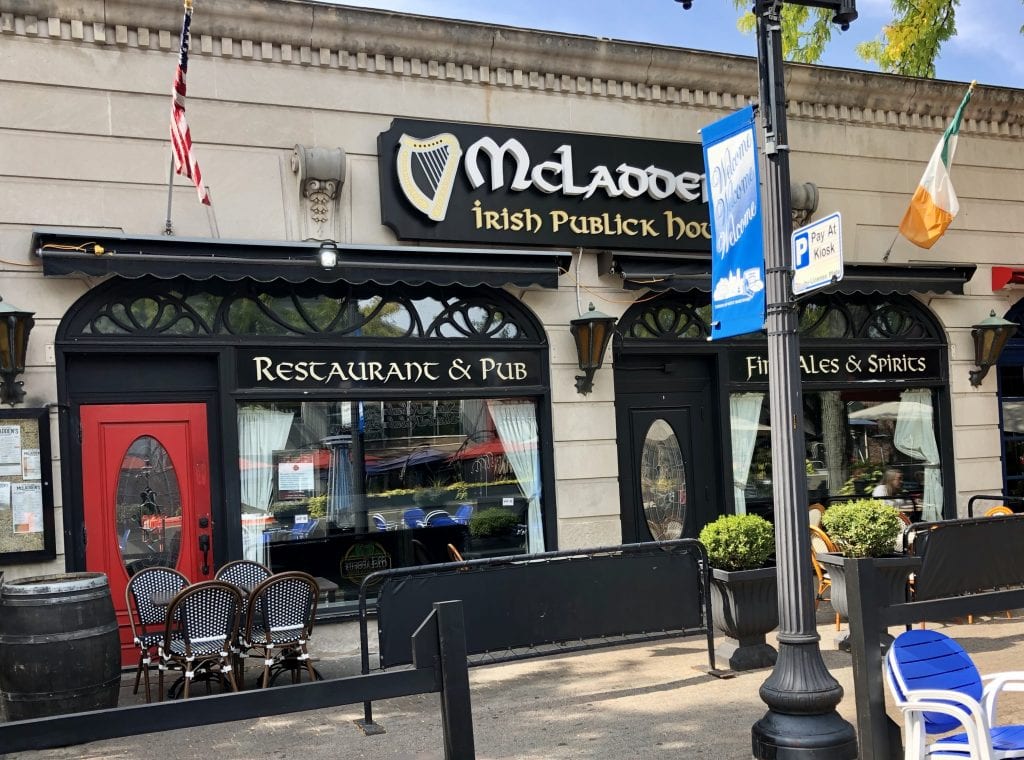 “We knew it was technically a restaurant,” Shuman said of McLadden’s, but it had such a bar vibe and food was never the focus. Although the Simsbury McLadden’s reopened, Bean Restaurant Group made the decision not to bring back West Hartford until bars could open.

At the same time, Bean Restaurant Group had long had an interest in opening a Wurst Haus in West Hartford. “It was always in our minds. ‘When’ was the question,” Shuman said.

Last winter, Bean Restaurant Group converted the Northampton, MA, McLadden’s into the Wurst Haus, and it opened with great fanfare. While like all restaurants in the region it also closed due to COVID-19, Wurst Haus has since reopened, as have the group’s other restaurants. 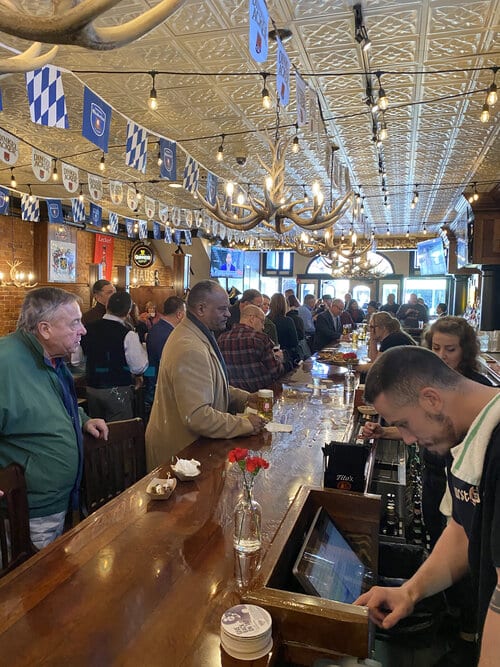 With McLadden’s closed, it made sense to do the transformation. “This is a better fit for our restaurant group,” said Shuman, who will also remain chef and partner at Union Kitchen.

In addition to the new Wurst Haus in Northampton, and a Wurst Haus which in most years operates at the Big E, Student Prince, the iconic German-themed restaurant in Springfield, aka “The Fort,” is a Bean Restaurant Group flagship.

The work has already started on remodeling McLadden’s. The beer lines have been pulled out to be relocated to the back of the bar, and the wall that ran down the center of the space has been removed. The ceiling is being painted, floors are being refinished, and Shuman said they are aiming to open by the end of October. 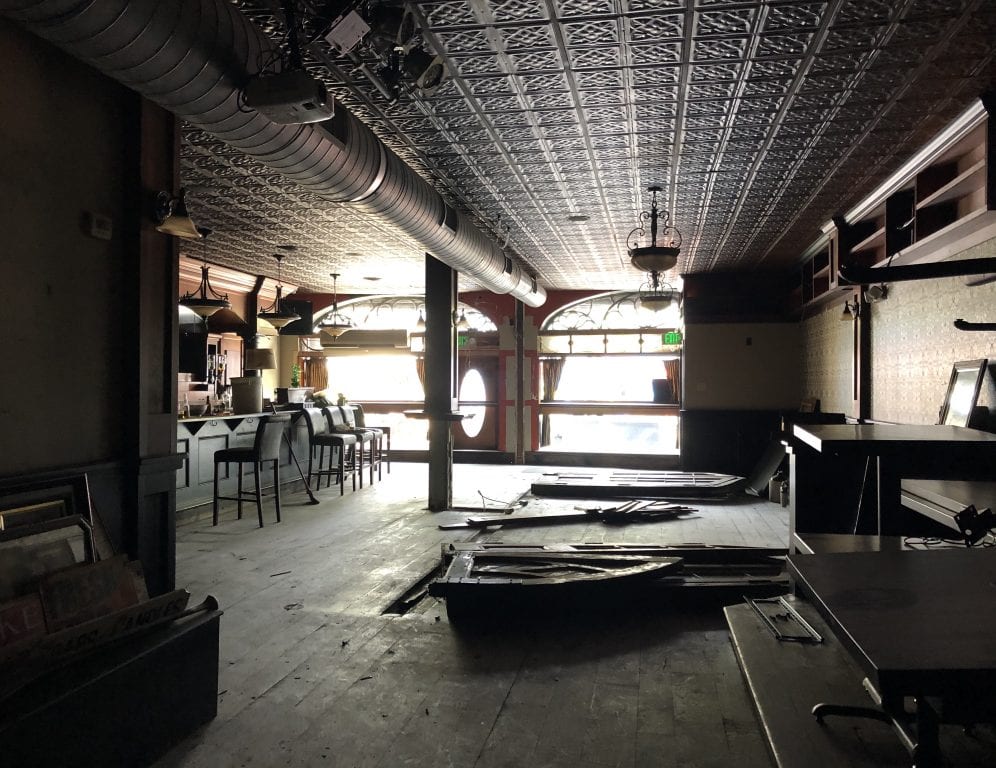 The interior of the former McLadden’s is in the midst of demolition and the space will reopen as Wurst Haus. Photo credit: Ronni Newton

Shuman spent more than three years working at Student Prince before being tapped to open Union Kitchen, so being the chef of a German restaurant is right up his alley.

Union Kitchen has been doing a series of pop-ups of other Bean Restaurant Group cuisines, and will introduce a few items from the future Wurst Haus menu as an Oktoberfest teaser beginning the first week of October. 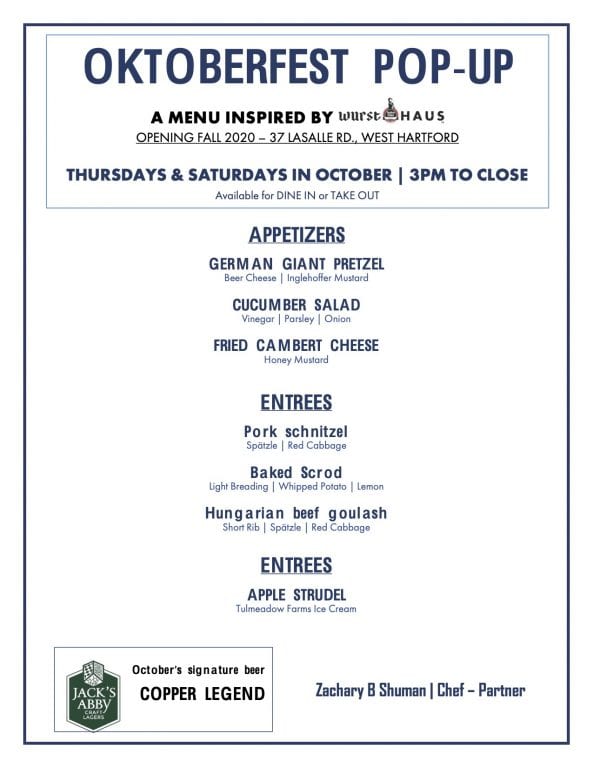 “The sausages are going to be done locally,” Shuman said, most likely through a partnership with Bloomfield-based Grote & Wiegal, which already has a relationship with Bean Restaurant Group.

There will be schnitzels, baked scrod, goulash, spaetzle, and giant pretzels as big as your head, as well as salads and a variety of bratwurst and knockwurst. There will also be plant-based sausage on the menu.

West Hartford’s Wurst Haus menu will be more expansive than the Northampton Wurst Haus, which specializes in small bites, but won’t be as big as the Student Prince menu, and the price point will be a bit lower, “more friendly,” Shuman said. “It will be more trendy, casual German dining.”

German beers, wines, and cocktails will also be featured. 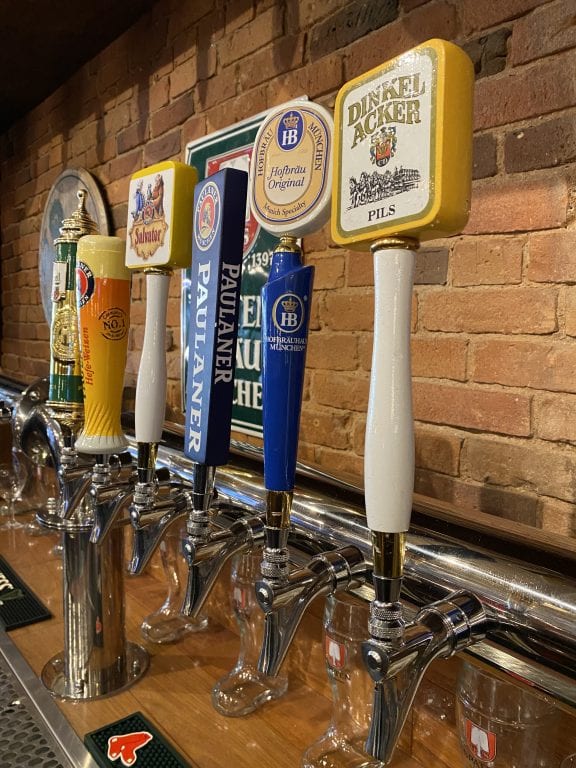 A selection of draft beer will be offered “by the boot,” with glass boots during the day but plastic boots for the late night crowd.

“We will be offering the largest selection of German beers in the area,” Yee said.

Eventually, once COVID-19 restrictions are lifted, Shuman said there will be live bands on Friday and Saturday nights.

“We want to be a destination for soccer,” Shuman added. 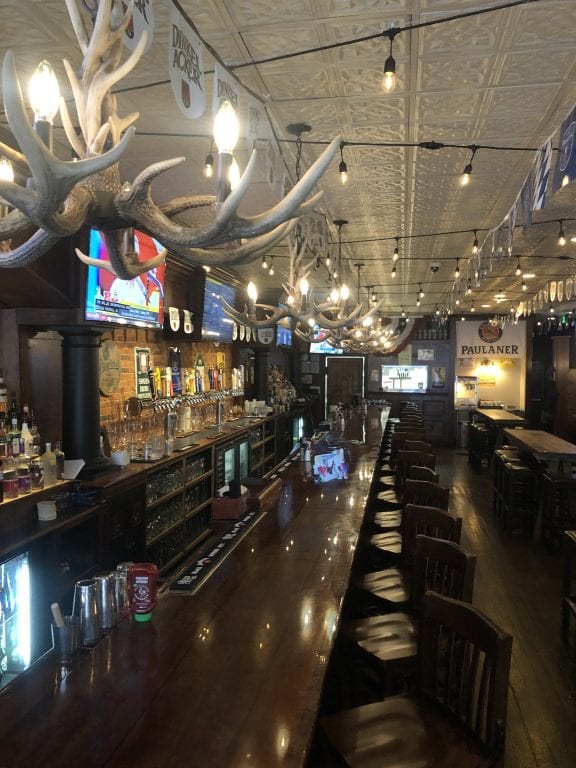 The decor will resemble the Wurst Haus in Northampton, with elk antler chandeliers over the bar and dining area, beer hall seating, and a new Wurst Haus mural to replace the McLadden’s logo. 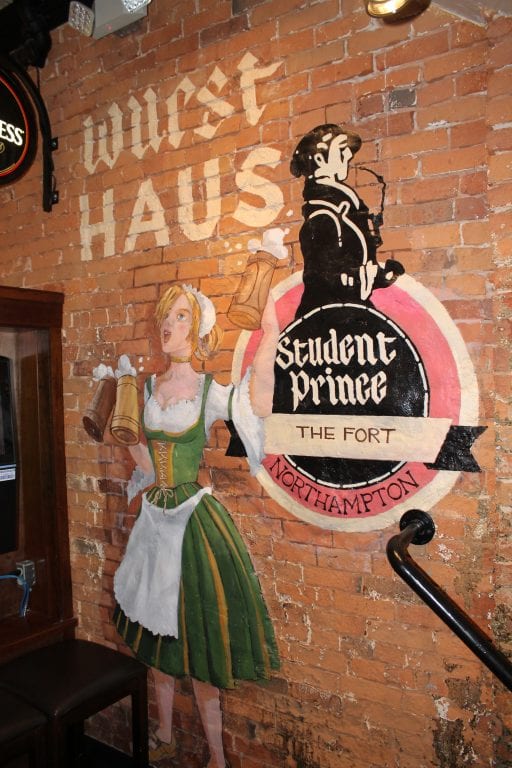 A similar Wurst Haus logo will be painted on the wall in the former McLadden’s in West Hartford. Courtesy of Bean Restaurant Group

Wurst Haus will also provide food to go, and will serve lunch as well as dinner. “We will also do brunch,” Shuman said, although not right away, and probably only on Sunday. Union Kitchen serves brunch on both weekend days.

There will be holiday to-go dinners available at the Wurst Haus as well, Shuman said.

“This is really positive news for the community,” said Danielle Veronesi, director of marketing for Bean Restaurant Group.

Updates will be provided on the Wurst Haus website. More information is also available on the Bean Restaurant Group website.