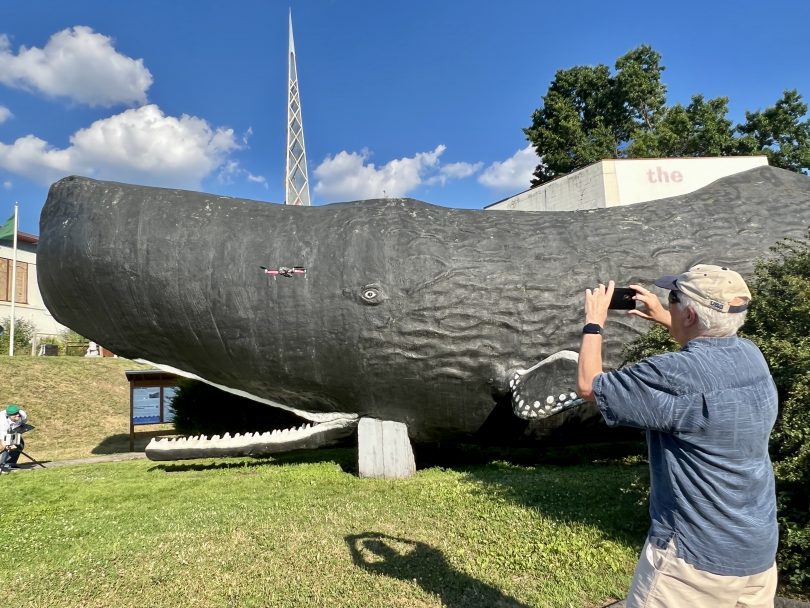 Dan Barstow of the Cetacean Society takes his own photos as a drone operated by Katie Wolfe is used to help create a 3D image of Conny in West Hartford on Wednesday. Photo credit: Ronni Newton

Cetacean Society International (CSI) hired a Maryland firm, which began work July 20 on 3-D imaging of the iconic whale at the Children’s Museum in West Hartford. 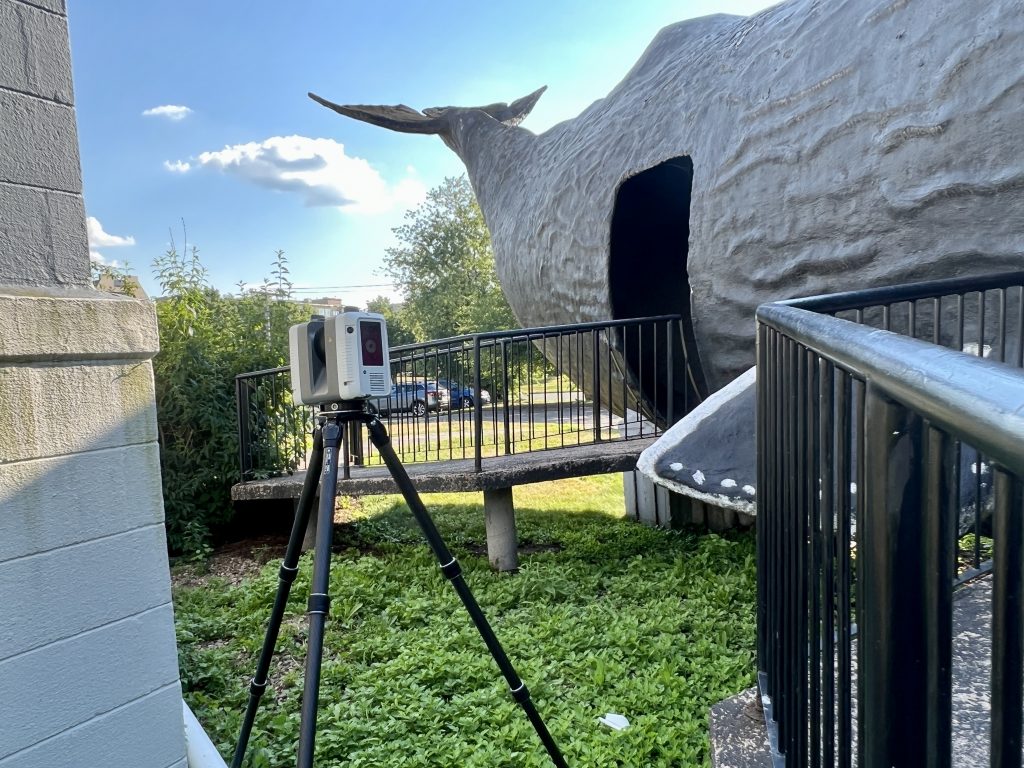 A Leica 3-D camera was one of several devices used by a crew from Maryland to document Conny. By Ronni Newton

Conny’s new home is not yet finalized – and the fate of the iconic sperm whale that has stood sentry over the grounds of the Children’s Museum in West Hartford since the mid-1970s still remains somewhat uncertain – but no matter what happens in the future, a detailed image of the whale will live on in perpetuity.

The 62-foot-long replica of a giant sperm whale, whose name “Conny” is short for “Connecticut,” was built by hand in West Hartford by the Cetacean Society and volunteers in 1975-1976 as a visible symbol of the organization’s “Save the Whale” effort, It will shortly need to be relocated due to plans to redevelop the property for multifamily residential use.

“This is something that CSI put together for our files, and our records – so that the whale could be recreated any time and anywhere,” said David Kaplan, a West Hartford attorney who serves as president of the Cetacean Society International (CSI).

Peter Kennedy, operations manager for Direct Dimensions, Inc., an Owings Mills, MD-based 3-D imaging company, said he’s never scanned something like Conny before, but the company does work on many unique projects. “We’ve scanned sharks, whale bones, and a whale skeleton at the Smithsonian,” he said. “You name it, we do it.” 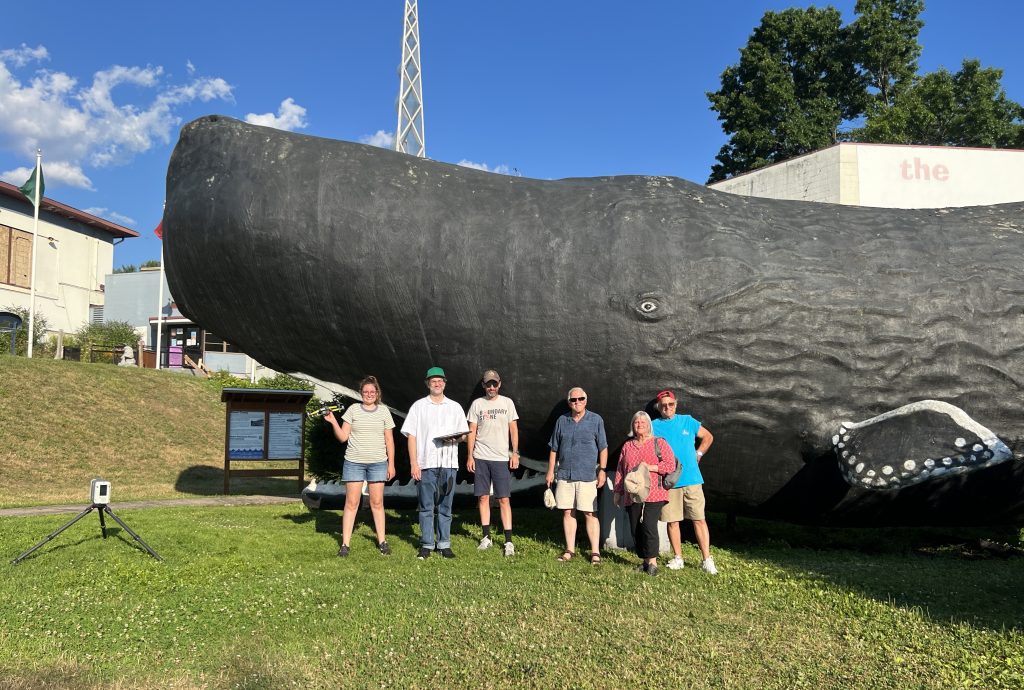 Members of the imaging crew from Direct Dimensions and the Cetacean Society International pose in front of Conny, the whale sculpture in West Hartford. Photo credit: Ronni Newton

Kennedy led a team that had driven up from the Baltimore area Wednesday afternoon, and he operated the Leica 3-D camera while Katie Wolfe piloted a drone and another team member used traditional digital camera to also capture images of Conny. The various types of images will be combined via a series of software programs to create a digital model. That model can be used for animations and simulations, to create a smaller-scale model, or even to create a life-size model using 3-D printing.

Over the course of several hours, Kennedy repositioned the Leica camera around the exterior of Conny to capture data points from varying angles. 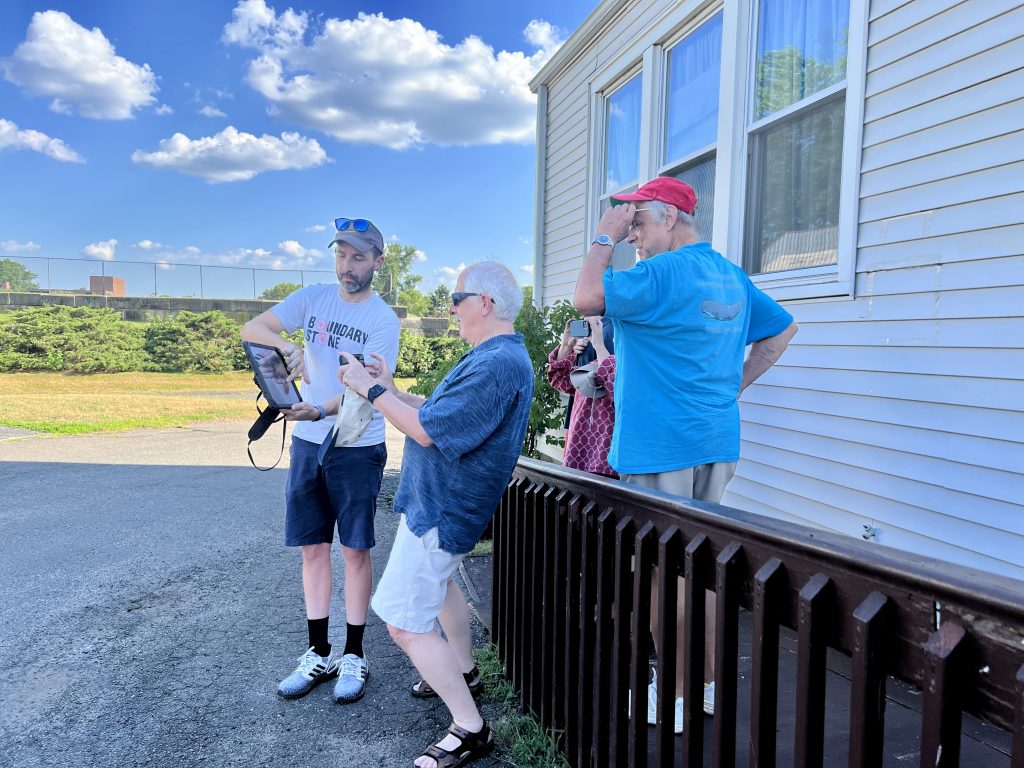 CSI Board member Dan Barstow, son of the Dr. Robbins Barstow, the founder of CSI, came from Massachusetts to observe the imaging. Dan Barstow’s brother, David Barstow, coordinated the 3-D imaging project, which cost the organization $8,500, but was unable to attend Wednesday afternoon.

Kate O’Connell, who Kaplan said is “truly an expert on whales,” was excited to see the imaging taking place.

“I was one of the ones who was here for the original build,” O’Connell said. She was a teenager at the time, a student at Northwest Catholic High School, and ended up as part of the “bucket brigade,” bringing water to mix with the cement used in Conny’s construction.

“Conny is special,” said O’Connell, who became a marine animal specialist and has dedicated her professional career to issues related to whaling and marine conservation. After helping build Conny, she got involved in what at the time was the Connecticut Cetacean Society, now CSI. 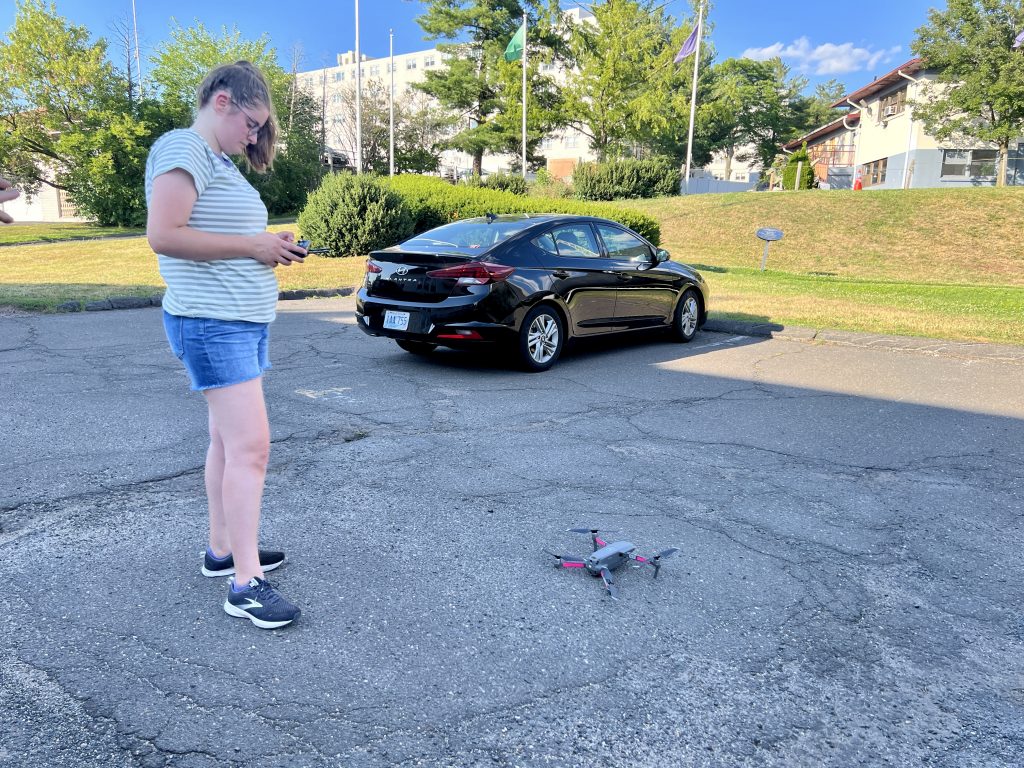 Kaplan, who was in law school nearby at UConn when Conny was constructed and didn’t participate, said the first “model” of the whale was made out of black trash bags over a wooden frame, and was part of a parade in Hartford to draw attention to the plight of the whales. Following that, Robbins Barstow, who co-founded the Connecticut Cetacean Society, was inspired to lead the construction of Conny as a more permanent and visible symbol of their efforts. At the time, many members of the board at The Children’s Museum were also part of “Save the Whale” efforts, and embraced the opportunity to have the statue on the campus, which was owned by the Museum at the time.

Kaplan is optimistic that Conny will be able to move across Trout Brook Drive, where three knolls between the brook and the bike trail – a greenway owned by the State of Connecticut – have been identified as a possible new location for the whale. “I think it has a better life ahead if it makes it to the park,” Kaplan said. 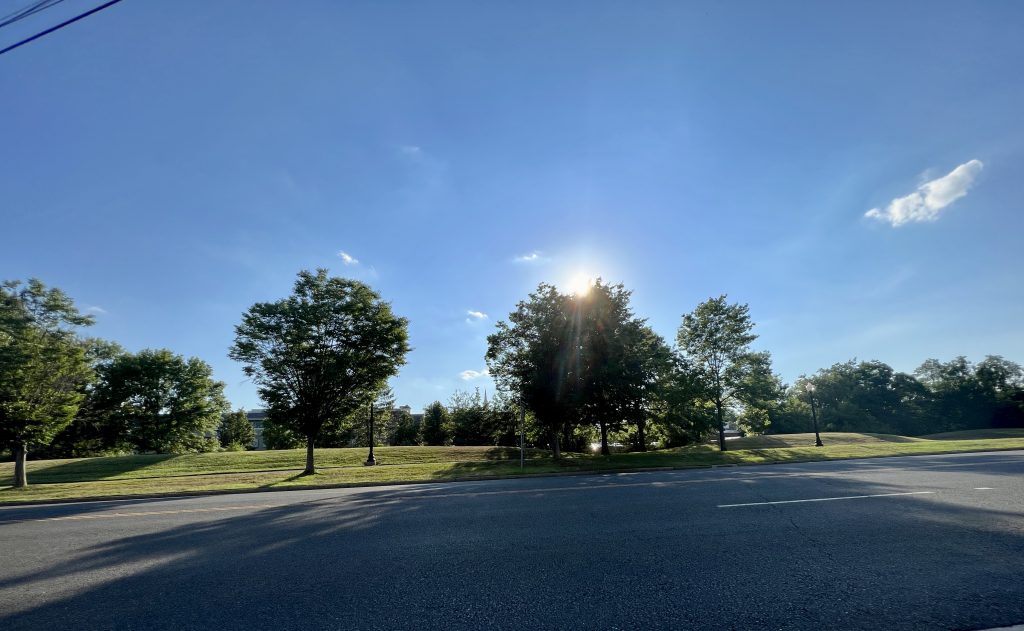 Members of CSI and others in the community hope that Conny will be able to remain in West Hartford and be relocated across the street to a greenway along Trout Brook. Photo credit: Ronni Newton

An RFP was issued by the Children’s Museum in early June for moving Conny across Trout Brook Drive – a move that would keep the whale in West Hartford, enhance the greenway, and prevent possible damage from a lengthy move.

Kaplan said a few proposals have been submitted, but they are looking for additional bids. He said ideas for transporting the whale, which is made from cement covering structural steel and estimated to weigh about 40,000 pounds, include using a crane, a truck, or moving it via helicopter. There is a helicopter that is able to lift up to 45,000 pounds, he said. 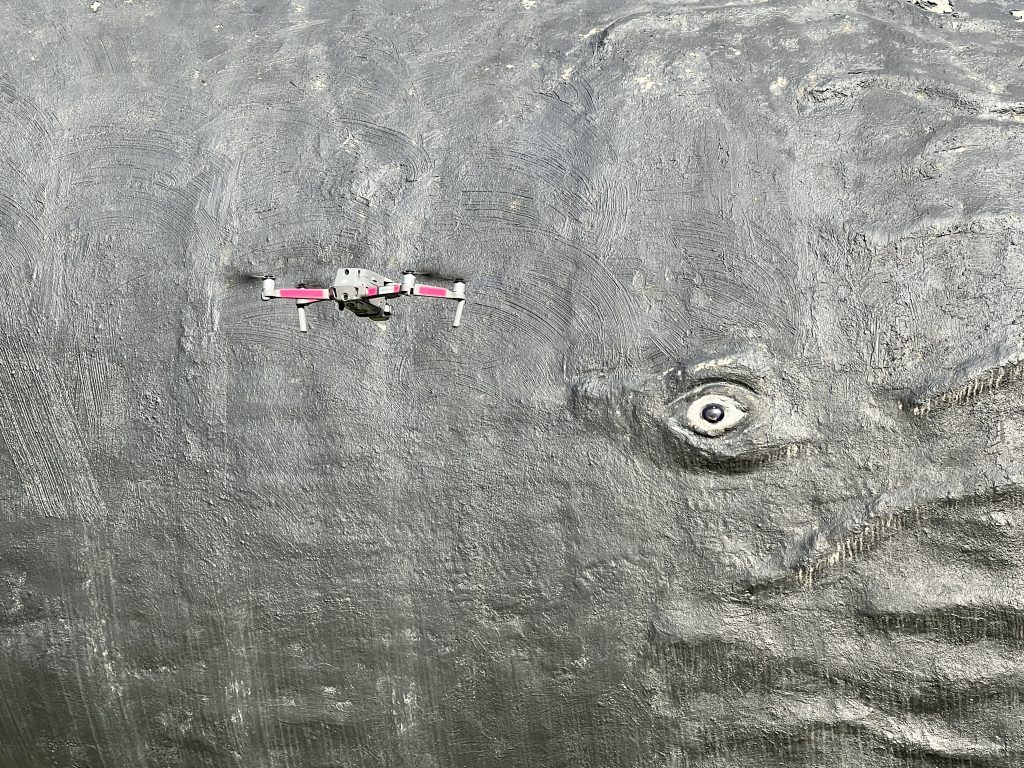 In January 2022, Kingswood sold the land on which includes the Children’s Museum and Conny, to Continental Properties, which is planning to construct a luxury residential development on the land which occupies a prominent location just east of West Hartford Center. Plans for that project are being finalized and a Special Development District will likely be under consideration by the Town Council later this year.

“We’re on borrowed time,” Kaplan said. While the Children’s Museum and its preschool will be temporarily relocating to a portion of Emanuel Synagogue on Mohegan Drive this fall, there are likely still a few more months before the property will need to be cleared for construction, but not much more.

“Everything’s up in the air but the whale,” Kaplan said. “As a group, we’d be very pleased to [have Conny] become part of the park system.” 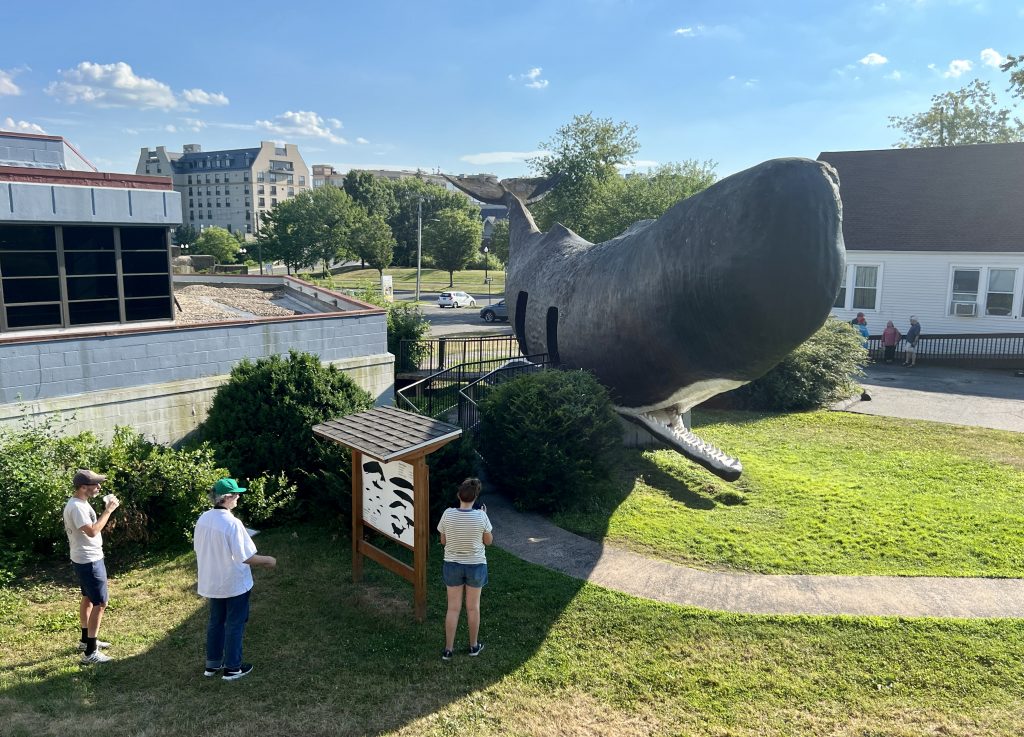 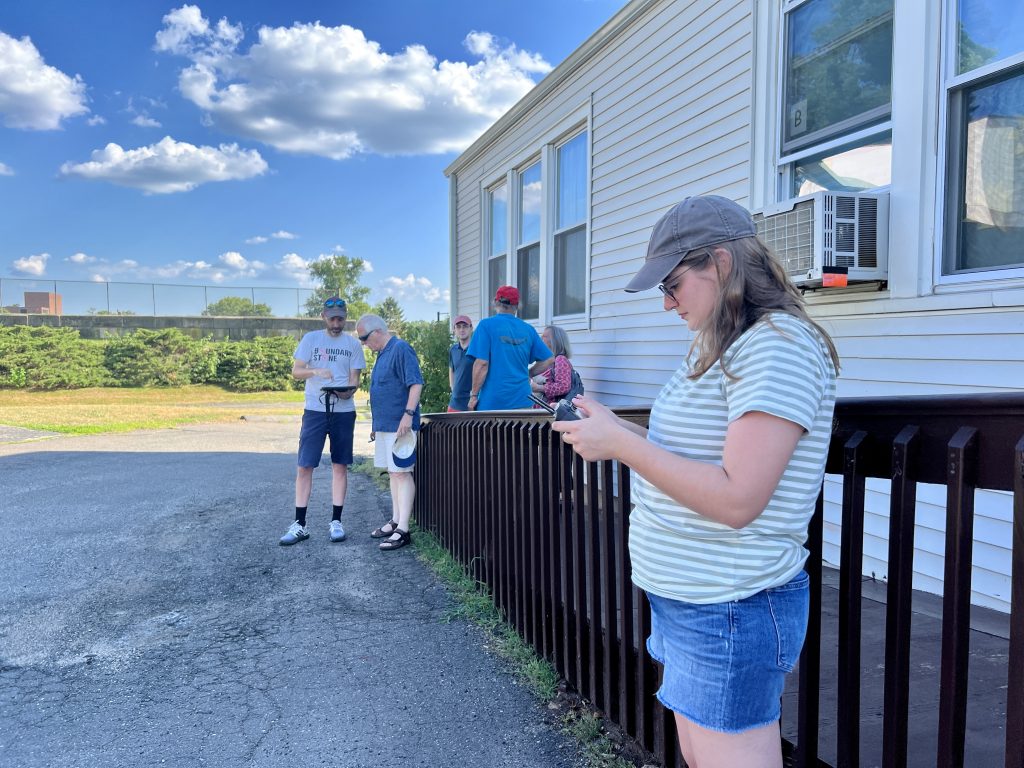 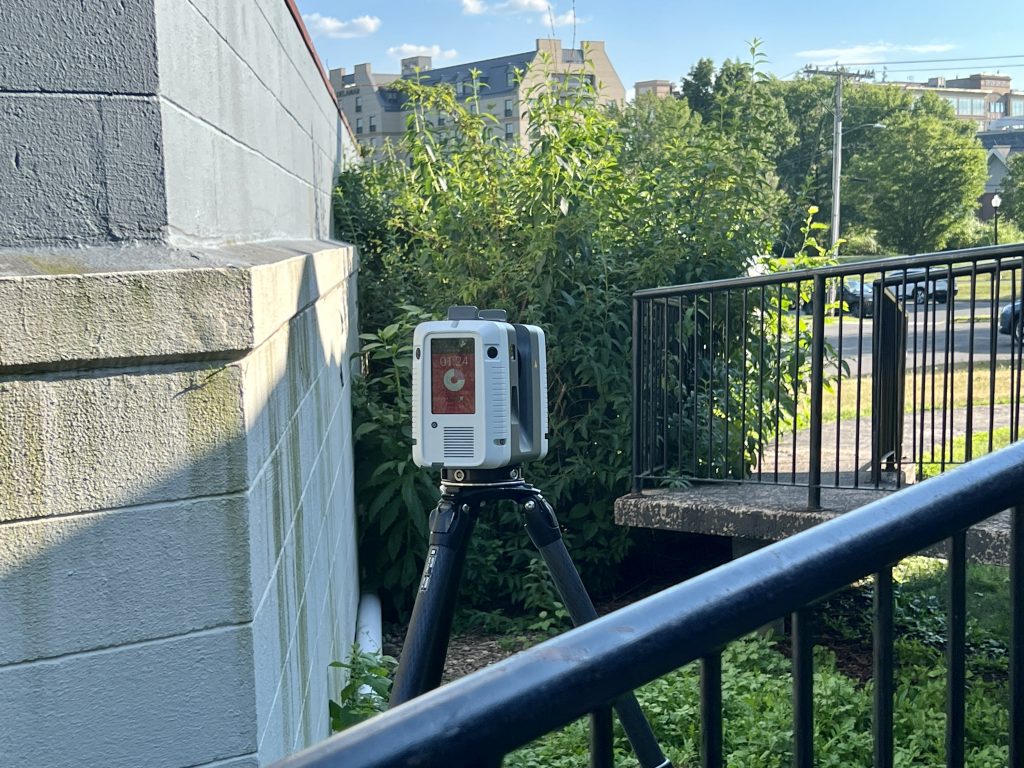 A Leica 3-D camera was one of several devices used by a crew from Maryland to document Conny. By Ronni Newton 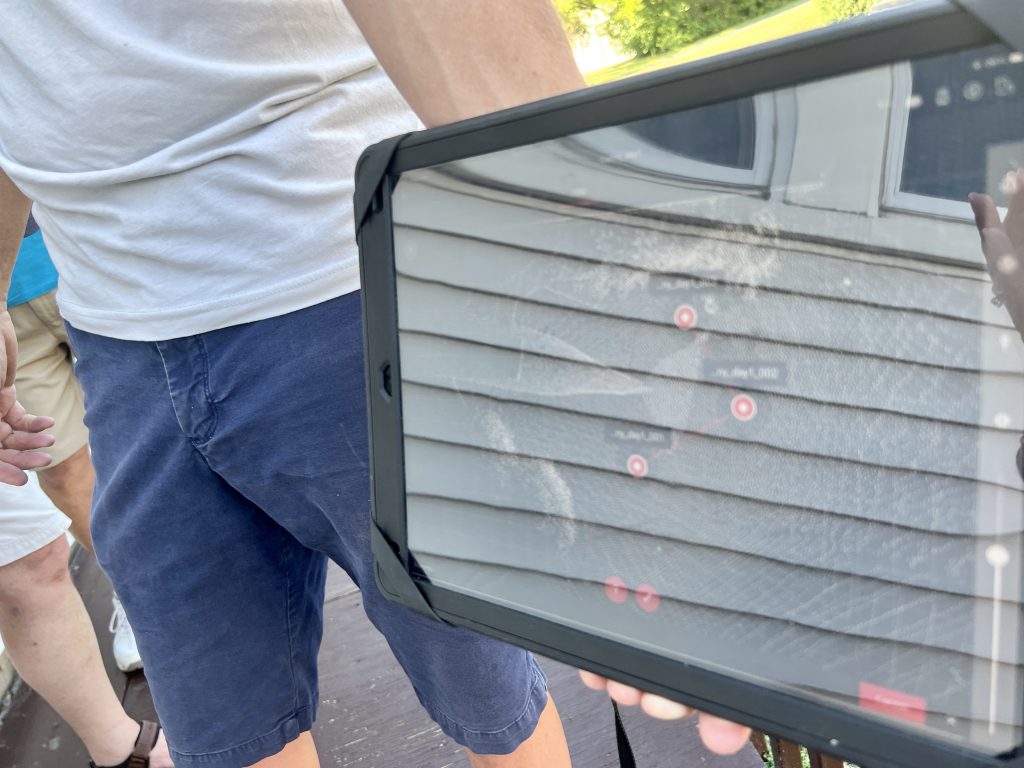 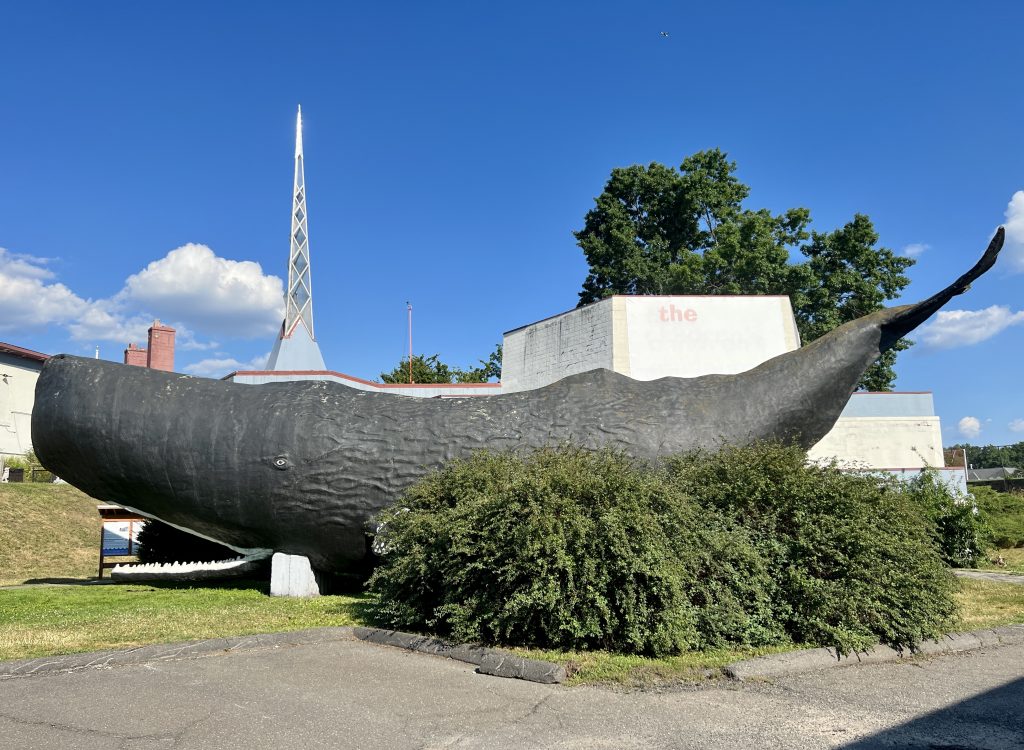 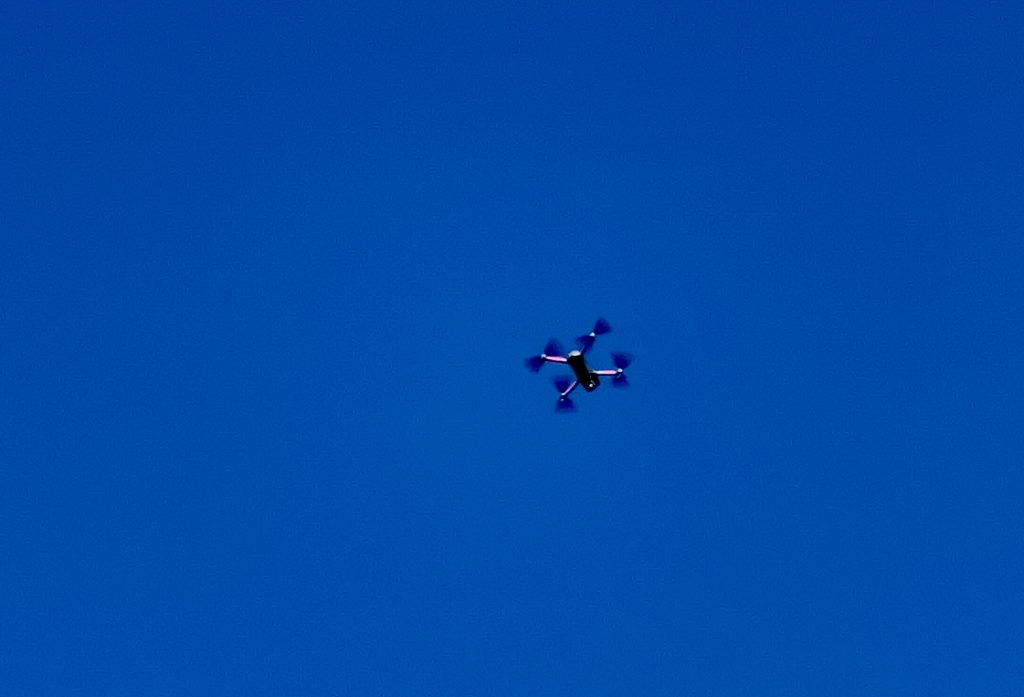 A drone is one of the devices used by CSI to create a 3-D image of Conny. Photo credit: Ronni Newton 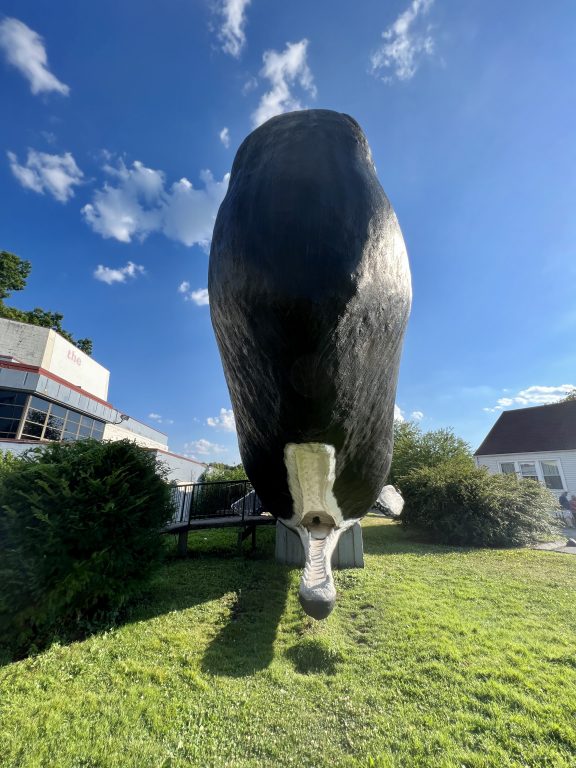 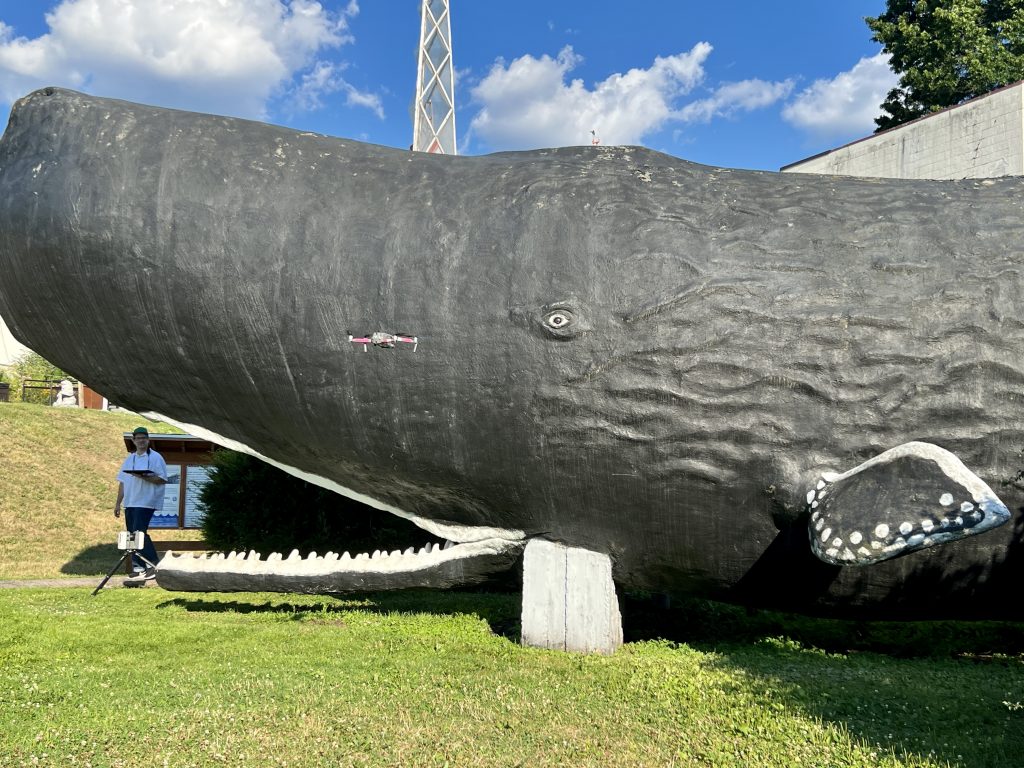